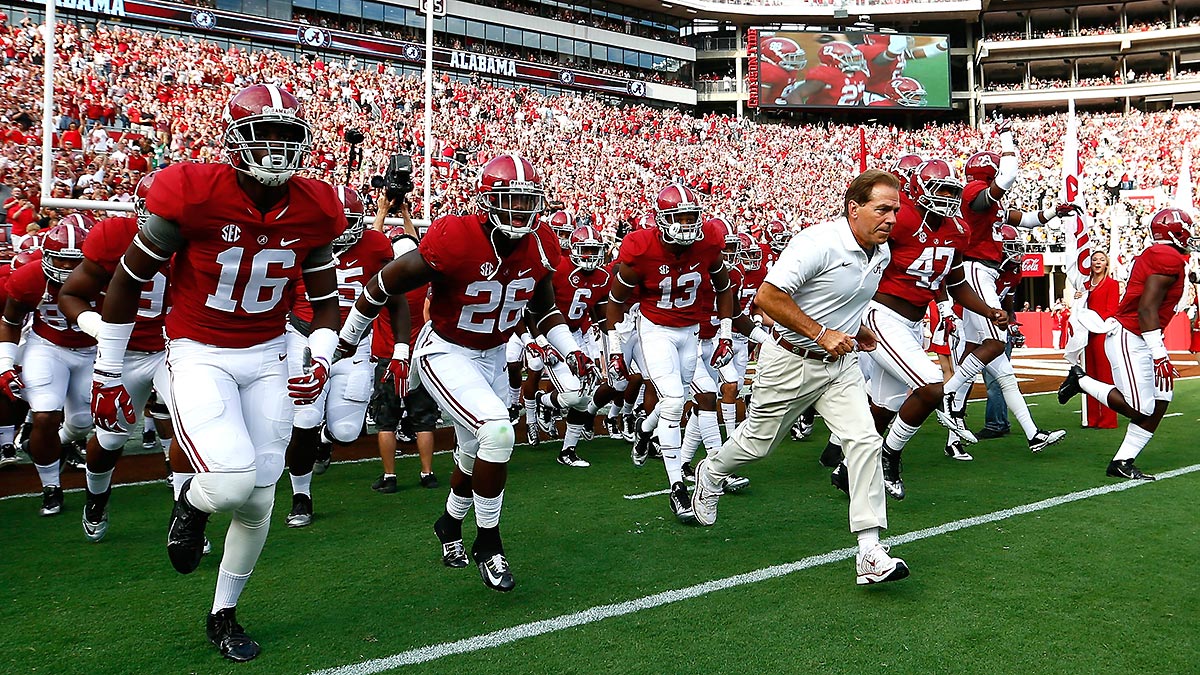 And then there were four! We’ve come at last to our first College Football Playoff, and not one team in this inaugural cluster made it through to the semis without giving its fans occasional vapors. Here, we trace each squad’s journey, remembering the good times and the times their coaches were forced to praise them on television after a 14-13 victory over Arkansas.

They’re the Tide. Y’all have met. Despite ending last season with a Sugar Bowl fiasco, Alabama entered 2014 trailing only Florida State in the preseason AP poll. That no. 2 ranking put the Tide two full slots ahead of their New Orleans vanquishers, the Oklahoma Sooners, which was funny to some people then and is funny to some other people now. We’re not AP voters, praise be, but we get the instinct to always buy in. Again, they’re the Tide, and there’s a kind of football-specific Stockholm syndrome at play here: Alabama, with its innumerable national titles, is the devil we know.

Remember Jake Coker? Here we were in August, sooooo sure he was a shoo-in to start: “There are those who believe that Alabama’s quarterback race is real. We’re not here to argue or to judge. We have our belief set; your position is between you and your gods.” Alabama did indeed stick with one quarterback most of the season — the other one. The only games in which Coker has seen meaningful playing time were against Florida Atlantic and Western Carolina; meanwhile, Actual Starter Blake Sims has thrown for 3,250 yards and 26 touchdowns.

"People ask me what Nick (Saban) says to me on the sidelines. It is just, 'I love you so much. Can we just run some." -Lane Kiffin, Alabama

There were bigger wins than Alabama’s 20-13 OT escape at LSU — the 55-44 Iron Bowl avenging of the Kick-Six game comes to mind — but for pure rivalry-game saber-twisting, it’s hard to beat Brandon Greene. Or tackle him.

We went there. From that far above the action, he looked like a ponderously moving toy ship. A malevolent tugboat, if you will.

And there were worse days than game day in Week 7 in Fayetteville — just seven days before, Bama had fallen to Ole Miss in Oxford — but the Tide caught Arkansas right on the leading edge of realization that the Razorbacks were capable of putting a scare into just about anybody. It was Nick Saban’s 100th game as Alabama’s head coach, and his squad barely escaped becoming Arkansas’s first SEC win since 2012. Look how haunted he seemed, at barely the midpoint of the season:

Following that dismal stretch — and if you think a loss and a near-loss in consecutive weeks isn’t so bleak, have we got an Alabama radio show for you to sample — the Tide have yet to lose again. The SEC championship game is looked upon in certain strata of fandom as a formality, and that’s sort of understandable: Bama won its last two December games in Atlanta, in 2012 and 2009, and didn’t even have to get there in 2011 to make the national championship game. Still, there’s something about that attitude that makes our chaos veins yearn for those folks to twist in their seats a little. But it takes two teams to make an upset, and this year’s Missouri squad wasn’t one of them.

About that Crimson Tide tendency to win SEC championship games: The last time Alabama made it to Atlanta and didn’t win was 2008, when their betters proved to be Urban Meyer’s Florida Gators. In the bright new days of 2015, on January 1 in the Sugar Bowl, Sabz-and-Urbz will meet again, two great tastes that make you want to run stairs until your legs turn to muscadine jelly. There’s thick, spicy history here; pour it over some ham and tuck in, why don’t you?