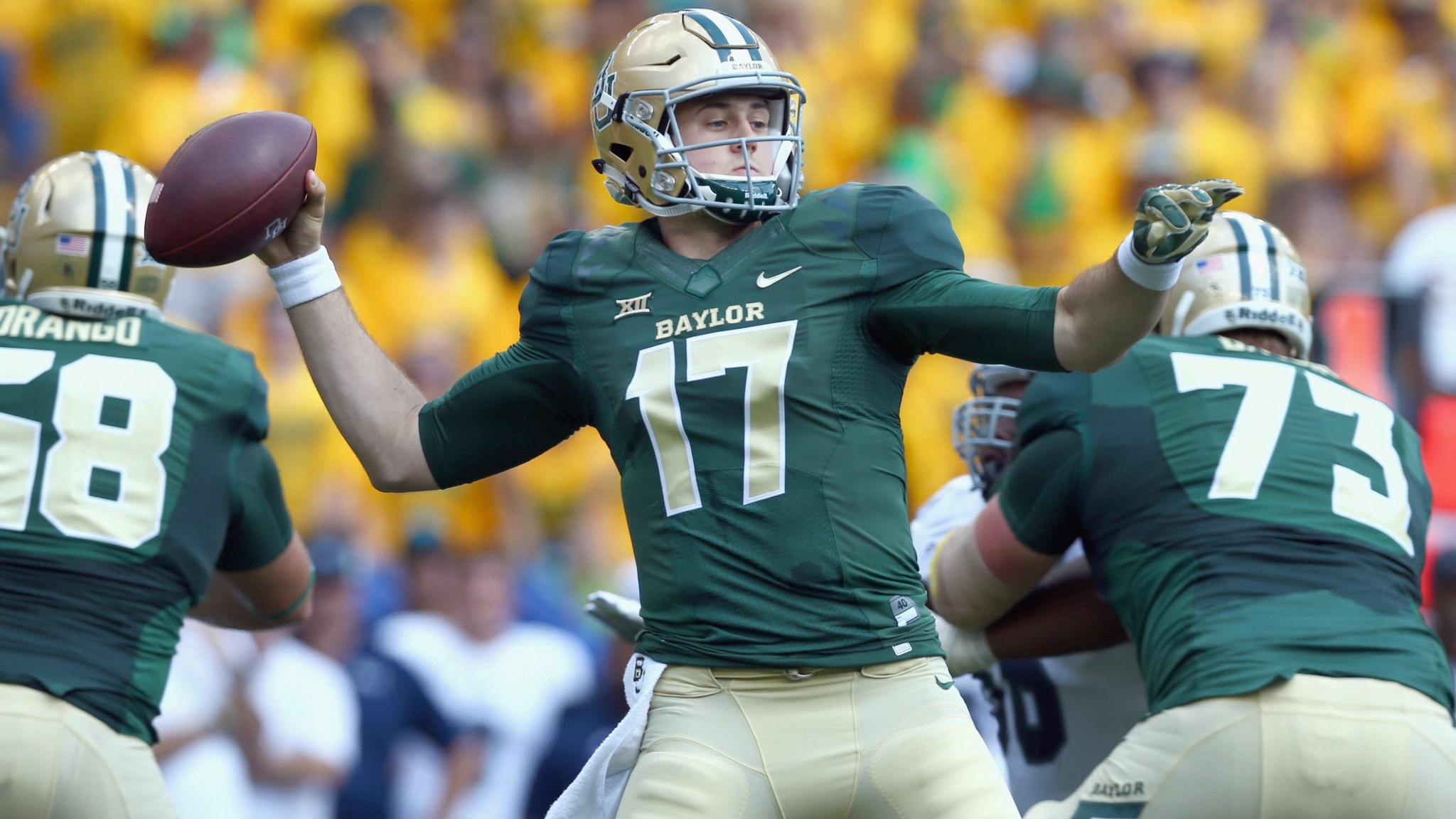 Baylor is 5-0, and this is nothing new. Baylor is obliterating inferior opponents with such palpable vigor that it seems inevitable the Bears will soon be posting triple digits over the course of four quarters, and this is nothing new, either. This is the third straight season in which the Bears have commenced the year with at least five consecutive staggering victories while the offense has put up mind-blowing numbers under coach Art Briles. And yet it is easy to be skeptical here, and to presume that this whole light-speed start — which has rocketed Baylor to no. 2 in the polls — is yet another tease, and that the Bears are more of a fascinating postmodernist construction than a playoff-worthy college football team.

There is something so surreal about the way Baylor plays football these days that it often feels like a gratuitous fantasy that will eventually give way to the gritty realism of defeat, as it has each of the previous two seasons.1 Everything about Baylor’s offense appears to be the true-life incarnation of a video game; that the Bears have added a 400-pound tight end to their attack this year makes it easy to imagine that everything occurring in Waco is actually taking place in the mind of a small child wielding a PlayStation controller and a warped sense of humor. Last week, the Bears demolished a hapless Kansas team on the road 66-7 and Baylor’s quarterbacks completed 27 of 37 passes for 363 yards and five touchdowns; afterward, Briles called his team’s effort “sloppy.” Through five games, Baylor’s starting quarterback, Seth Russell, has thrown 22 touchdown passes and has a quarterback rating of 210.68; after the Kansas game, Russell said, “We’re starting to come together.”

It boggles the synapses to consider that a team averaging 725 yards of offense per game is only “starting to come together,” but there’s a hesitation that attends Baylor’s every victory, and not only because its early-season nonconference schedule is deliberately terrible. The default notion among the Baylor dissenters is that the central premise of Briles’s philosophy is fundamentally flawed, that the Bears have so maxed out the potential of the spread offense that they cannot help but snap the rubber band at some point; the default notion is to presume that if Baylor does survive the Big 12 season and make it to the College Football Playoff, the Bears’ empty soul would be exposed by a team that could slow them down and play the sort of defense that no longer exists in the Big 12. The default notion is that Baylor’s offense is more machine than man; and though man isn’t infallible, machines can be gummed up and destroyed.

One of the common dismissals of the Baylor machine, of course, centers on the quarterback. Because the Bears stretch the field to its physical limits, because they run the ball in space, because they employ speedy wide receivers who can make things happen among all of that green grass, the contention is that any faceless automaton can put up huge numbers behind center. Baylor passers are viewed as system quarterbacks; and given the series of prolific throwers that Briles has produced year after year, it’s hard to argue that point. Robert Griffin III (37 touchdown passes in 2011, six interceptions, one Heisman Trophy) begat Nick Florence for one season (33 touchdown passes, 157.52 passer rating), and Florence begat Bryce Petty for two seasons (32 touchdown passes and three interceptions in 2013, 29 touchdown passes in 2014), and Petty gave way to Russell, a junior from a suburb of Dallas and the kind of genuine-seeming kid gifted with the same nondescript charm that both Florence and Petty had.

And here is the moment in this column where I should probably attempt to humanize Seth Russell for those of you who know nothing about him. Here’s the part where I should tell that you he almost wound up stuck at Kansas instead of blowing minds at Baylor, and that he was the 106th-rated prospect in Texas, according to ESPN, and that he was second-team all-district his senior year at Garland High, and that he is majoring in speech communication and aviation science, and that he currently sports a Lincolnesque ring of facial hair.

But here’s the thing I have to ask: Do you really care about all of that right now?

Even if the Bears had defeated any first-tier programs this season, the Baylor offense is such a machine that it tends to obscure the individual cogs. Is Russell a better quarterback than Florence or Petty? Who can really tell at this point?2 And who will be able to tell until the Bears reach the tail end of a bottom-heavy schedule that includes consecutive games against Oklahoma, Oklahoma State, and TCU?

It’s been three years since the Bears lost to West Virginia 70-63 in a game that would eventually prove a bellwether for the spread offense, a springboard in the wake of Griffin’s 2011 Heisman year that helped Baylor maintain perpetual national attention. The Bears are amazing again so far this season, and Russell may be as prolific as Florence and Petty were before him, but now is the time of year when we start to wonder, once again, if we can believe what we’re seeing. Fool me once, a famous Texan once said, you can’t get fooled again. I want to believe in the machine, but my heart is telling me to be wary.

We Found Lopez in a Hopeless Place: Your 2015-16 Brooklyn Nets