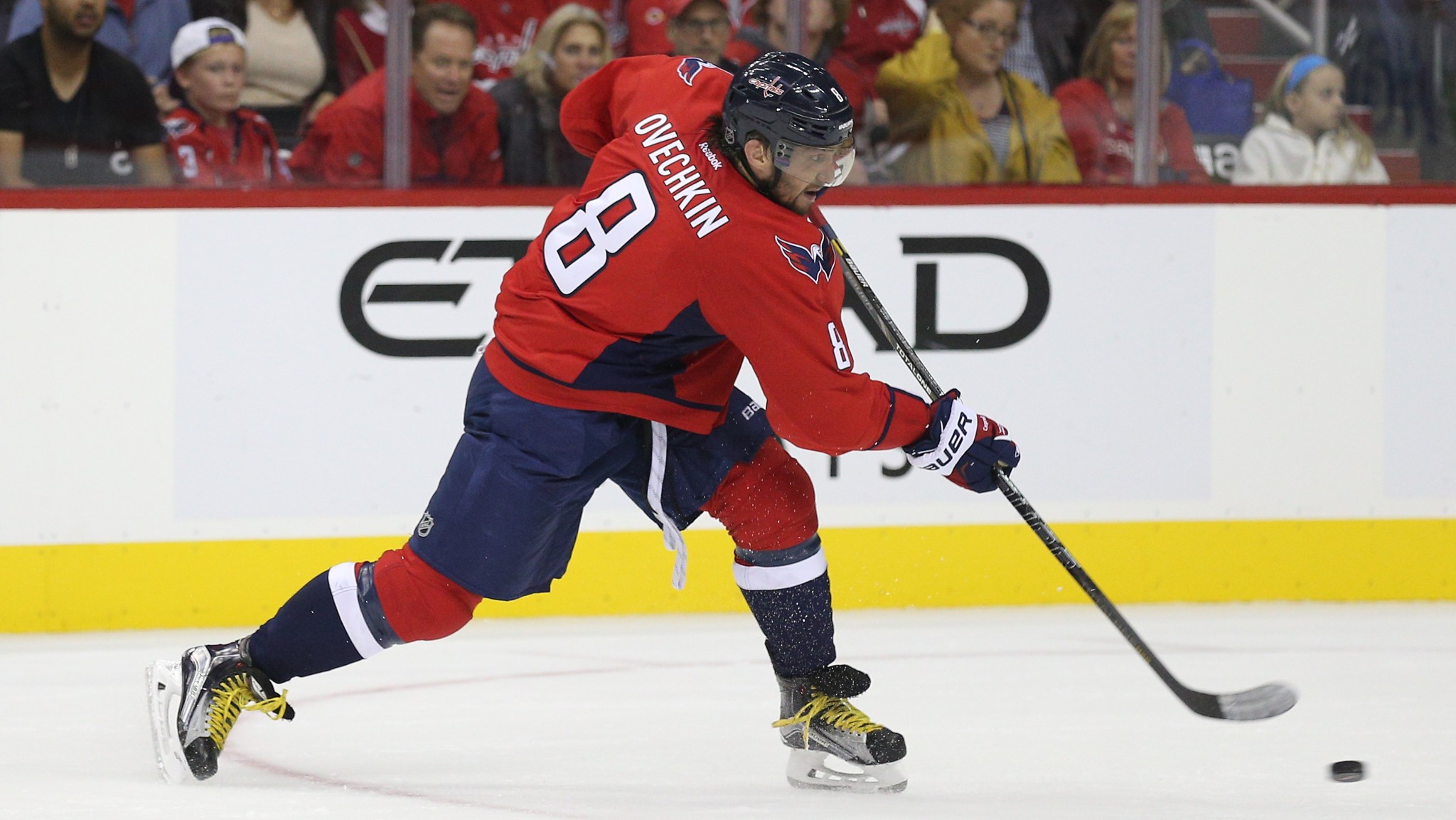 Missing practice because you overslept isn’t funny. (I mean, it is, but we’re all supposed to pretend it’s not.) But Alexander Ovechkin’s response to being scratched because of it is just about perfect:

“It was suck,” Alex Ovechkin said of his punishment, sitting last night’s 5-0, after missing the morning skate.

Yes, I imagine we’ve all had days at work like that, Alex. It was suck, indeed.

The good folks over at /r/hockey have spent the last few days creating an NHL super-franchise made up of players from Buffalo, the Wild, and the Wings. Here’s a logo. Here’s one proposed roster. Here’s a roster that’s cap compliant.

Why? Because Reddit, that’s why. Sometimes it’s better not to ask too many questions.

The first star: This photo

Now I want every Canadiens player to dramatically sing “You are … my fi-yah” into that damn torch they pass around before every second game.

The outrage: A referee went and used instant replay to blow a goalie interference call.

Is it justified? First things first: We can’t say for sure that Tuesday’s reversal by Tim Peel was wrong. It’s a judgment call and all that, and those can be tough even in super slo-mo. But most of those watching sure seemed to think that the NHL blew it. And it was especially strange to see the call overturned given that the rule is clear: If there’s “any doubt whatsoever,” the call on the ice is supposed to stand.

So lots of fans are upset, reasoning that the league put instant replay in place to make absolutely sure the calls were right, and now it seems to have caused one that was right in the first place to go wrong.

But here’s the problem: That’s not how replay works, at least not when there are any shades of gray involved. Ask an NFL fan whether instant replay has cleared up all the confusion over what counts as a catch. Ask an MLB fan how they’re enjoying this new era of guys getting called out because their cleats come off the bag for a microsecond.1 And get ready to ask NHL fans, because goals being waved off for minor interference is about to become the new normal.

And that’s what we should have expected all along. Not to say “I told you so,” but instant replay is complicated. And more importantly, other sports have already shown us what it does: eliminate the completely unacceptable missed calls, while introducing the occasional false positive. And on balance, that’s probably worth it.

Be outraged if you want, but pace yourself. This kind of thing is going to happen a lot this year.

Devoted readers of my work, which is a category of people that could theoretically exist, may have noticed that this week’s piece on the history of the NHL waiver draft mentioned more than a few Obscure Former Player alumni, including guys like original OFP Dave McLlwain and one of the Greg Adamses.2 Let’s keep that theme going by giving this week’s honors to the only man ever picked first overall in two different waiver drafts, Slovakian winger Zdeno Ciger.

Ciger was a third-round pick by the Devils in 1988, and debuted in 1990. He played parts of three seasons before being traded to the Oilers for Bernie Nicholls. He blossomed into a 30-goal scorer in Edmonton in 1996, then left the NHL to play in Europe, which is when teams started futilely picking him in the expansion draft. He eventually made a return with the Rangers in 2001, then was quickly traded to the Lightning for Matthew Barnaby. Today, he coaches the Slovak national team.

Despite all that, my favorite Ciger memory is the line that one TV guy had after the Devils traded him the Edmonton: “Well, at least it’s good to know that you can still get a Ciger for a Nicholls.” That right there is the second-best pun-based trade of all time, behind the Takko-Bell deal.

Every few games, you’ll see a player get his stick broken by a slash. It almost always results in a penalty, which is annoying enough on its own since modern sticks can be broken by a stiff breeze, but we’ll save that complaint for another day.

No, today we’re simply going to make a request of the NHL players: Stop acting confused when an opponent breaks your stick. Before the shrapnel even hits the ice, the victimized player is immediately in over-the-top pantomime mode. “Whatever could have happened to my stick? It was big before, but now it is little. I am confused and frightened by this development, and I will now hold the broken shaft aloft in my hand and stare at it in wonder!”

Guys, we get it. You’re trying to sell a call. But maybe dial it down a notch. It’s a universal truth that hockey players are terrible actors, whether they’re trying to draw penalties or host Saturday Night Live. We all get that your stick got slashed. And the referee is going to call it, because the referees already call this penalty every single time.

So go back to the bench, get a replacement, and save your confusion for something that really warrants it. Like a gas fireplace. Speaking of which …

We had some fun last week with Oilers winger Taylor Hall and his recent attempts to figure out how to eat a banana. If a guy who struggles with produce sounds like the sort of fellow you’d like to hang out with, then you’re in luck. Thanks to the Edmonton Oilers reality show Oil Change, we got the chance to do just that back in 2011.3

• This is from a Season 1 episode of Oil Change, and it features a 19-year-old Hall and his fellow rookie roommate, 20-year-old Jordan Eberle, giving us a tour of their apartment. This is going to go about as well as you’d expect.

• We start off with a tour of their pantry, which is basically Kraft Dinner and a few boxes of cereal. They admit that they’ve cooked a total of four times all season, which answers the question “How does an Edmonton Oiler celebrate a win?”

• Hall is apparently a Saskatchewan Roughriders fan, which means he’s wearing a watermelon on his head. Do you think he tried that with the banana? I’m guessing he did.

• Hall is confused by the fireplace’s pilot light. “It’s electric,” Eberle helpfully explains. Um, are we absolutely sure these two made it all the way through the season? Has anyone checked to make sure they didn’t mysteriously disappear and get replaced by body doubles like Avril Lavigne?

• Eberle tells an amusing story about how the pair managed to screw up their first trip to the grocery store. Hall helpfully adds that they forgot to buy milk, which is probably a good thing since it would have been awkward when they saw a photo of Nikolai Khabibulin’s glove hand on the side of the carton.

• Honestly, I’m having some fun with these two here, but if 20-year-old me saw this clip, he’d be like, “Wow, those guys know how to make Kraft Dinner. They really have their acts together.”

• “I chuck my clothes in there, and next thing I know they’re all neat and folded.” Wait, we’re just going to let that hang there? Who’s been secretly doing Taylor Hall’s laundry? Does Eberle have to do it? Does some Oilers assistant coach sneak in when they’re at practice? Is it Eberle’s mom?

• I like how Eberle turns the lights out when he leaves a room. You can tell he’s the responsible one.

• Next up is a tour of their bedrooms. Hall has the small one, and I can’t hear anything he’s saying about it because I’m distracted by the adorable piggy bank on his nightstand. Meanwhile, Eberle couldn’t be bothered to make his bed even though he knew a TV camera crew was coming over. Circa-2011 Hall and Eberle are my spirit animals.

• Now comes the highlight of the video: Hall complaining that he doesn’t have a walk-in bathroom, followed by Eberle deadpanning, “I’m pretty sure you just walked into it.” A quick power ranking of Jordan Eberle’s life achievements:

• “I’ve taken like one shower this whole year in the shower,” Hall tells us. Wait, why did he need to add “in the shower” to that sentence? Has he been taking showers somewhere else in the apartment? Is he using the sink? Standing under an eaves trough? Does Eberle come home every day and find Hall cramming himself into the laundry machine? Where are the follow-up questions, hockey-based reality TV show producers?

• We close with the pair playing video games, because of course they do. But there’s absolutely no way that they both play as the Oilers. I refuse to believe that. I guarantee you that Eberle is the sort of guy who lets you pick your team first as if he’s doing you a favor, then picks a team that’s just slightly better. Meawhile, Hall probably just cycles through the teams for hours, looking for the Roughriders.

Realizing they’d found the perfect sitcom couple, Oil Change producers later posted a second clip of the pair, in which they recount their struggles to hang up the only artwork in the apartment (their own jerseys) and explain the main reason why they don’t barbecue on their patio (they don’t own a barbecue). There’s no word on when Eberle’s mom got around to buying and assembling one for them.