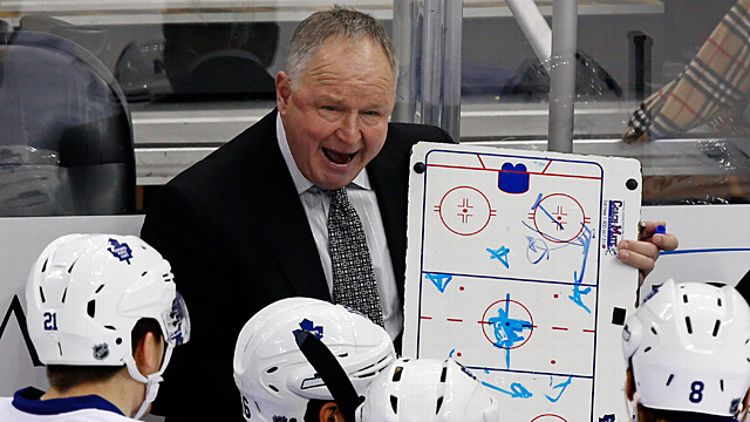 Recognizing the three moments from around the league that produced the most comedic fodder for fans this week.

The third star: The Edmonton Oilers break out the The Flying V
I know they’re supposed to be a young team, but this seems to be taking it a little too far, no?

The second star: Randy Carlyle vs. his whiteboard
Taking the Toronto Maple Leafs into Pittsburgh and having them whip the Cup favorites in their home opener? Easy! Figuring out how to work a marker tied to a skate lace? Not so much …

The first star: Paul MacLean’s doppelganger
The Ottawa Senators coach somehow managed to make it through the entire game without noticing his identical twin sitting right behind him. The doppelganger later claimed he was just a regular fan who happened to randomly have seats right behind the bench, which — it should be pointed out — is exactly what a clone sent back from the future to kill Paul MacLean would say. 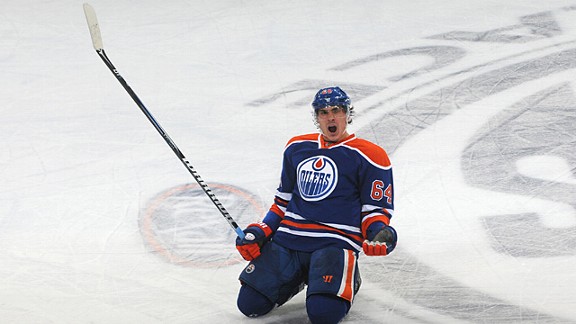 Nothing makes hockey folks happier than being outraged about something relatively unimportant. Each week, we’ll pick one topic fans are complaining about and try to figure out if it’s justified.

The outrage: Everybody knows you never go full Fleury! That’s especially true since Fleury’s goal came in overtime of a must-win playoff game, and Yakupov’s was in the third game of the regular season. Act like you’ve been there before, kid! Plus Yakupov is Russian, which apparently factors in somehow.

Is it justified: This is a tough call. In a league where every team makes defense its first, second, and third priority, it seems kind of odd to criticize a kid for being happy about scoring an important goal. On the other hand, you have to draw the line somewhere. Right around the time Yakupov buries his head in his hands in disbelief, the whole thing starts to go from “youthful enthusiasm” to “awkwardly overdramatic” to “oh no, I think Taylor Swift just started writing a song about this.”

So I’m kind of torn on this one. I just wish there were some sort of expert we could consult and …

Oh, wait, I’m told that Theo Fleury himself has something to say?

Hey everyone thanks 4 remembering me tonight. Great celly by Yak! Just got 150 tweets after the goal. Love the raw emotion of scoring big G

There you have it, folks. If it’s OK with Theo, it should be OK with us. Case closed. 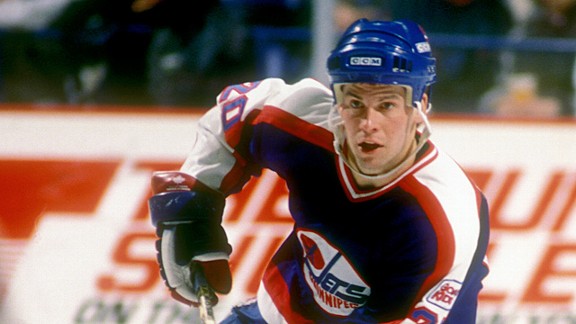 This week, our obscure player is Dave McLlwain, a defensive forward who played in the NHL for 10 seasons (followed by 10 more in various European leagues).

That’s a pretty impressive pair of accomplishments right there.

By the way, check out the cities McLlwain played in during his NHL career: Pittsburgh (twice), Winnipeg, Buffalo, Uniondale (twice), Toronto, and Ottawa. So let’s add a third fact: Apparently, Dave McLlwain really enjoyed being cold and bored.

This week’s debate: Was it OK to score using that one backhand/forehand move that worked every time in NHL 94?

Opposed: You are a monster.

In favor: Don’t get mad just because I’m a really good player …

Opposed: You were a terrible player, and everybody hated you. This includes your friends, family, and pets.

In favor: Oh, come on. If you don’t like it, just don’t give up breakaways!

Opposed: Great idea in theory, except that breakaways made up one-quarter of all time spent playing NHL 94. (The other three-quarters: one-timers, more one-timers, and complaining about how they took out the fighting.) So if you were playing somebody who thought using The Move was OK, there was nothing you could do to avoid giving up 20 goals a game, short of unplugging their Genesis and dropping it into their fish tank. Which you absolutely should’ve done, by the way.

In favor: You know you could always switch over to manual goalie controls and …

Opposed: Literally every person who ever used manual goalies in NHL 94 grew up to be a serial killer.

In favor: (Looks sheepishly at freshly dug up sections of back yard.)

The final verdict: If you were one of the people who used this move, you should’ve been rounded up and sent to a penal colony with the people who looked at the other guy’s controller when he was picking his play in Tecmo.

Trivial NHL-related Annoyance of the Week 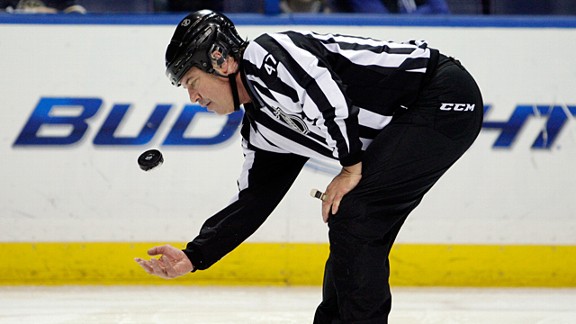 For the last few years, the league has been making its referees announce goal decisions to the crowd. This replaced the old system, in which the referee would relay the decision by either waving his arms or dramatically pointing to center ice while the crowd went nuts. It was part of the NHL’s ongoing initiative to take everything cool about hockey and ruin it.

The first problem is that an NHL referee’s microphone has literally never worked. Not one single time. For some reason, the NFL can get them to work, but the NHL can’t. Apparently, the functional microphone store makes you show a decent television contract as ID.

Potentially related to that first point, the ref always looks like he’d rather swallow his own tongue than make this stupid announcement. Remember in school, when you had to do public speaking, and that one kid would always get a few seconds into his speech about Koko the talking gorilla and then throw up all over himself? That kid grew up to be an NHL referee.

What I’m trying to say is that anything that makes me feel sympathy for a referee is clearly unnatural and needs to end immediately. Remind me to work in a Kerry Fraser joke before the end of this post.

In which we select one page on capgeek.com and stare at it while a single tear rolls down our cheeks. 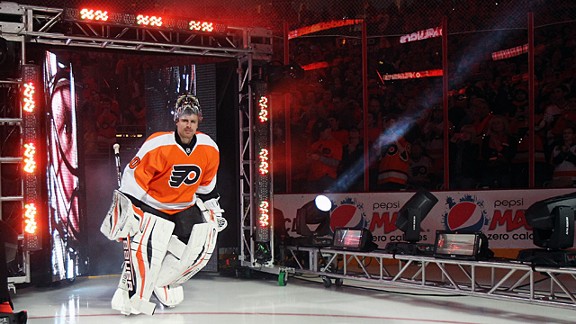 Who else could we lead off with other than Ilya Bryzgalov’s player page?

Let’s summarize: Bryzgalov has eight years left on a nine-year, $51 million deal he signed in June 2011. It’s front-loaded, but the salary dips this year because his agent apparently knew we’d lose half a season to the lockout. When this contract ends, Bryzgalov will be 40 years old and will probably be living in a child’s sandbox that he thinks is the surface of Neptune.

Oh, and the Flyers traded away Jeff Carter and Mike Richards in part to make room for this deal. And did we mention that they’re already rumored to be in on Roberto Luongo?

The big Cherry-related news of the offseason was the CBC’s decision to add a second Coach’s Corner segment to its Saturday night doubleheaders. When the time came for the new-ish segment to debut last Saturday, it turned out to be pretty much exactly the same … with one bizarre exception:

Don Cherry was standing up.

Look, I know this doesn’t sound like a big deal to some of you, but you have to understand: Don Cherry does not stand up. His entire job description basically consists of five things: wearing a funny suit, telling kids not to put their sticks in front of slap shots, mashing his desk, mispronouncing names, and then getting angry about how much time is left.

And he does all this while sitting down because he just does, OK? Until Saturday. For a generation that grew up watching Cherry every week, it was disorienting. And it led to a lot of questions.

What happened to his chair? Did the CBC sell it between games because of funding cuts? Did somebody come over and borrow it for an important meeting in the boardroom? Does he end every Coach’s Corner by breaking it over Ron MacLean’s head WWE-style as soon as the camera goes off?

So many questions. Expect this Saturday’s late-game Coach’s Corner to put up record ratings, as a confused and frightened nation tunes in to see whether Don Cherry got his chair back.

For the inaugural edition, we might as well go straight for the most awesome and horrific hockey YouTube clip in existence. Ladies and gentlemen, your 1986-87 Calgary Flames proudly present “Red Hot”:

OK, let’s all link arms and try to make our way through this.

Bottom line: This music video was basically what “Thriller” would’ve been if they’d replaced all the zombies with bad mustaches.