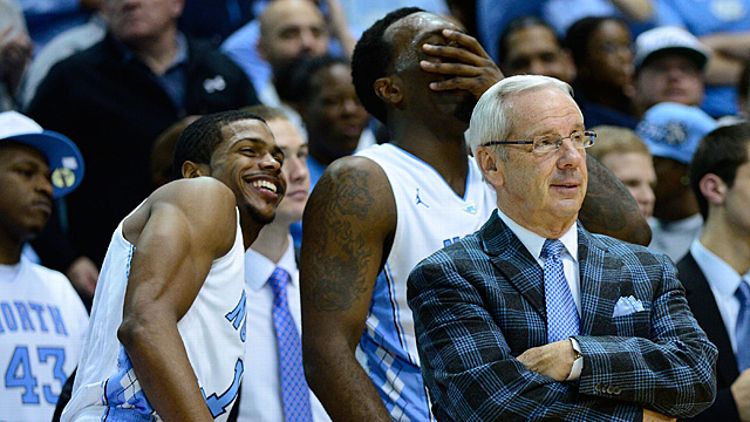 One revelation for me this season is that teams that play very slow, physical styles with a focus on defense — and a less worthy offense — tend to be very unpredictable. KenPom has the Hoyas as a top-10 defense, but a distant 145th on offense, and their results have been all over the place. There’s an OT loss to Indiana, a win over UCLA, a blowout loss against Pittsburgh, a blowout win against Notre Dame, and grinding losses to Marquette and South Florida. When you look at Virginia’s profile — 9th on defense, 131st on offense — you see the same apparent randomness. Which means that this game is actually pretty tough to predict. You’d expect Louisville to bounce back in a big way after dropping two straight to Syracuse and Villanova, and you’d expect that the excellent Pitino defense would hold Georgetown to somewhere around 50 points, but there’s the nagging possibility that the Hoyas could return the favor and steal one at home.

Guys, I’m afraid I put the jinx on Butler. A big focus of the Monday Shuffle was the fact that Brad Stevens rarely loses a close game. In games decided by 5 points or less in the past four years, I pointed out, Butler was 26-9. The Bulldogs responded to that research the only way possible — by losing a one-point game. To La Salle. And they’ll have another challenge against Temple, a team that beat Syracuse, nearly beat Kansas, and has a terrific scorer in Khalif Wyatt. It’s an intriguing A-10 matchup, and would probably be a bit higher in the Weekend Top 10 if Butler weren’t exactly the kind of team that shut down great scorers like Wyatt … or Cody Zeller, or Kelly Olynyk, or James Michael McAdoo. At Hinkle, I can’t see Temple cracking the Bulldogs defense.

I said plenty of negative things about Duke yesterday, after the embarrassment in Miami, so I’ll try to keep this to a minimum. What you have to know about Duke is that without Ryan Kelly, anything is in play. Including a loss to Maryland at Cameron. The great players who led Duke during their great preseason tour have somehow lost their greatness. Seth Curry is coming off a goose egg in Miami, and Mason Plumlee, a former player of the year candidate … well, the great Bomani Jones said it best yesterday:

“Mason’s on the Shelden Williams tour this year, playing dudes into the first round.”

That’s a reference to ’06, when Williams, Duke’s center, was outclassed by a number of ACC bigs who immediately became overvalued. Mason’s own tour is well under way, and his list includes Devin Booker (Clemson), Richard Howell (State), and Kenny Kadji (Miami). The odds that Maryland’s 7-footer, Alex Len, adds his name to this list are high. And the Terps could use a defining game; despite a 15-4 record that puts them in the NCAA tourney discussion, their biggest win came in a godawful brickfest against NC State. Beyond that, the only other semi-impressive line on their résumé includes Northwestern, so it’s time to raise the bar.

The Aztecs have dropped out of the top 25, and rightly so; despite having great scorers like Jamaal Franklin and Chase Tapley, their defense has let them down at times, including a bad home loss to UNLV last week. But I still think this team has the potential to be very good, and I believe they’ll begin the process of climbing back into the top 25 against the Lobos, who, as things stand, are the class of the Mountain West. Their biggest strength is getting to the free throw line, which they accomplish at the third-highest rate in the country thanks in large part to Kendall Williams, a 6-foot-4 guard who leads the team in scoring and is also apparently a chess enthusiast. If San Diego can’t “check” him on the perimeter, we’ll be in for a repeat of the UNLV loss. Get it? Check? It’s a chess term, mate. (Mate is also a chess term.) (My God, I’ve gone off the rails.)

Let me list a few names of prominent Oklahoma players, and you tell me which ones sound made up: Romero Osby, Amath M’Baye, Buddy Hield, Je’lon Hornbeak, Sam Grooms. The answer is that none of them are made up. Nor is the Sooners’ surprising 4-1 record in the Big 12. Oddly enough, they could move into a tie for first place in the conference with a win. Kansas has appeared vulnerable in three of their five Big 12 wins so far, and while it’s unlikely they’ll lose the perfect conference record at home, it will be a good chance to gauge Oklahoma’s legitimacy.

The stakes are simple. The Illini are in a free fall, having lost three of their last four, and five of their last eight. If they can’t win home games against ranked conference opponents, they won’t make the tournament.

Speaking of free-fall mode, Minnesota has lost three straight, including a very bad letdown against Northwestern. The last thing any team needs when things are going poorly is a trip to Bo Ryan’s personal dungeon in Madison, Wisconsin. This game will test the Gophers’ character. Win or lose, they have a very good chance to reel off a bunch of victories, but they need a psychological boost beyond what thumping Nebraska can bring. And they’ll have to get it done by correcting their atrocious turnover rate (15 each against NW and Michigan, 17 against Indiana), which doesn’t play in the Big Ten and sure as hell won’t fly in the Kohl Center.

With recent losses to Columbia, Alabama, La Salle, and Providence, I think it’s safe to say that Villanova’s win over Louisville was the fluke of the season. It’s even more bizarre when you consider that ’Nova gives away turnovers in general, and steals specifically, at one of the highest rates in the country, and Louisville bakes its bread on defense. As the box score shows, ’Nova shot lights out and got to the line at an incredible rate. These are not repeatable skills for a mediocre offensive team, so I fully expect Syracuse to come in and dominate.

There are two things you can count on when Carolina and State meet. First, it will be fraught with tension and anger and drama and all the darkness that comes with a genuine culture clash between schools a stone’s throw away. For more on that, read here. The second thing you can count on? Carolina will win. Nineteen of the past 20 matchups between the schools have ended the same way, with the Tar Heels prevailing and rubbing it in with that special smarm only they can muster. That’s a decade of futility for the Wolfpack, who can probably hear the awful “not our ri-val!” chant every time they close their eyes. (To make matters worse, UNC actually beat State in football this year, in devastating fashion, so their usual gridiron solace is gone.) So if you want to watch a talented but flawed team attempt to overcome history (and its own gigantic inferiority complex) and avoid what would be the most painful loss in a decade of painful losses — seeing as how this one comes with an awful, faraway glimmer of hope — well … tune in!

Tom Izzo and Tom Crean have the same first name, and both are head coaches at major college basketball programs. That is where the similarities stop. I know I should talk about the players and the styles and the trends and homecourt advantage and everything else, but seriously, guys, it’s Izzo vs. Crean. Tom Izzo. The Tom Izzo. Against Tom Crean. That Tom Crean.