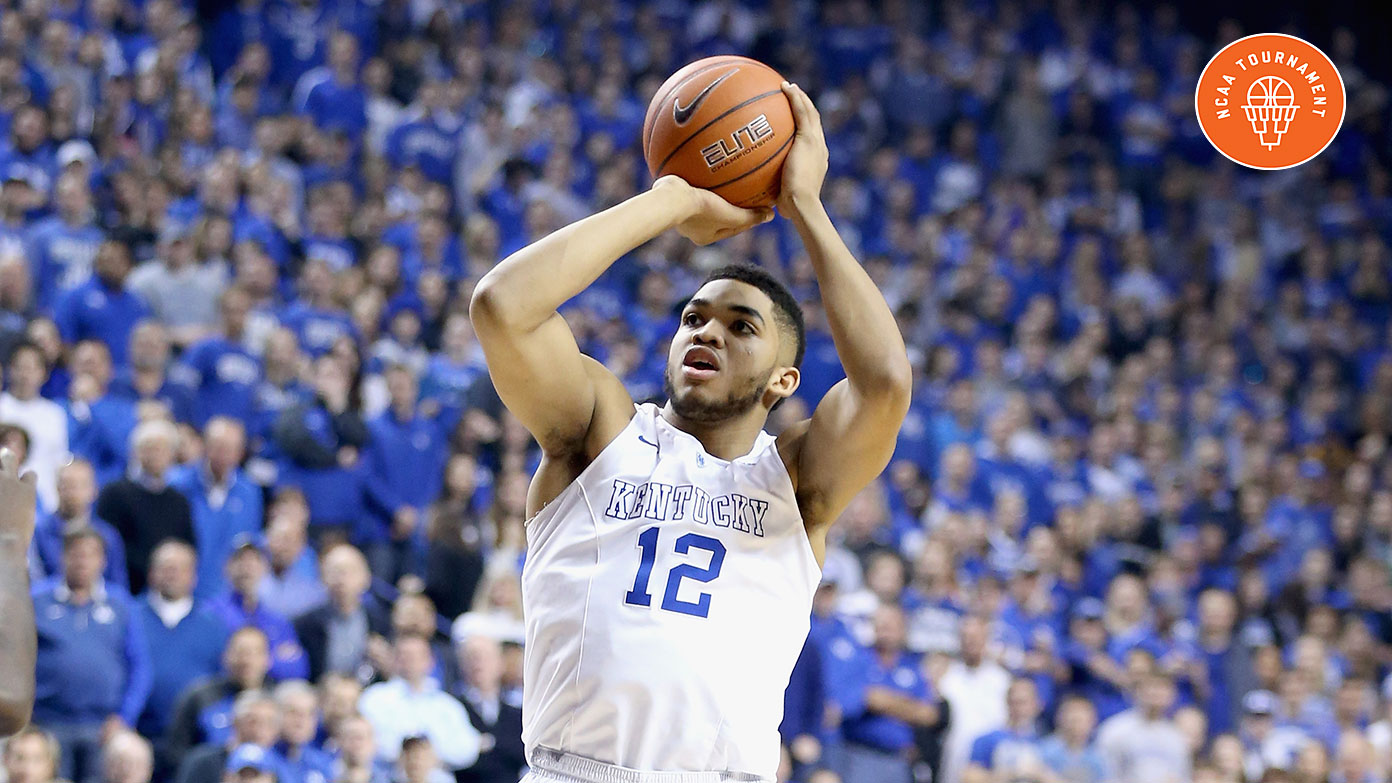 Last year, I came up with the “MoneyBrackets” system: What mistakes do most Americans make when they pick, I wondered, and how can we take advantage of those mistakes to crush them completely? I had lived too long by gut, intuition, and the fallacy of knowledge, and I was ready to sell my soul to the god of numbers. But while the original MoneyBrackets was fundamentally strong, it was still too tethered to the old ways. So I studied the results and have spent the past year tweaking the system to 15 irrefutable, pseudoscientific points.

Fair warning: Joe Morgan would hate MoneyBrackets. This is a purely cynical approach to bracketeering designed for those who want to win pools and make a profit. MoneyBrackets knows nothing of heart and/or grit.

Using the Washington Post’s awesome database of tournament results since 1985, we can see that since the tournament expanded to 64 teams, 74 of the 120 Final Four teams have been either 1- or 2-seeds.1 That’s 61.7 percent, and while it may seem like those numbers argue for picking two or three 1- or 2-seeds, consider this: In those same years, there have been 14 3-seeds and 13 4-seeds in the Final Four. Combine them, and that’s not even one 3- or 4-seed in the Final Four per year. Even if one does make it in 2015, your odds of actually picking the right one are, at best, 1-in-8. Go any lower in the seeds, and your odds get exponentially worse.

All the Grantland coverage of the 2015 NCAA tournament, right here.
That’s not the kind of risk we like at MoneyBrackets, folks. We do not roll the dice when we don’t have to. It’s almost a guarantee that a team other than a 1- or 2-seed will make the Final Four this year, but that doesn’t change the fact that you have a terrible chance of picking the right one. Stick with what you know!

MoneyBrackets must be adjusted year to year, and in 2015, the 3-seeds are dog-ugly. You definitely shouldn’t pick Notre Dame (see points no. 4 and no. 6 below), Baylor (no. 5), or Iowa State (no. 4). That leaves Oklahoma as the only 3-seed you should even be remotely considering, but the Sooners probably have to navigate past Tom Izzo or Virginia before they even think about the Final Four. The 3-seeds are poison this year — look away!

Back to the Post database: The top dogs are an absurd 104-16 in the second round since 1985. That means an 8- or 9-seed actually wins once every two years, or one out of every eight tries. If you pick that type of upset this year, you have a 12.5 percent chance of being correct. WHAT DID WE SAY ABOUT THOSE KINDS OF RISKS? Move that 9-seed into the Sweet 16 and everyone who picked the 1-seed will be gaining points for each round they advance while you weep at your failed St. Johns–over-Duke pick. 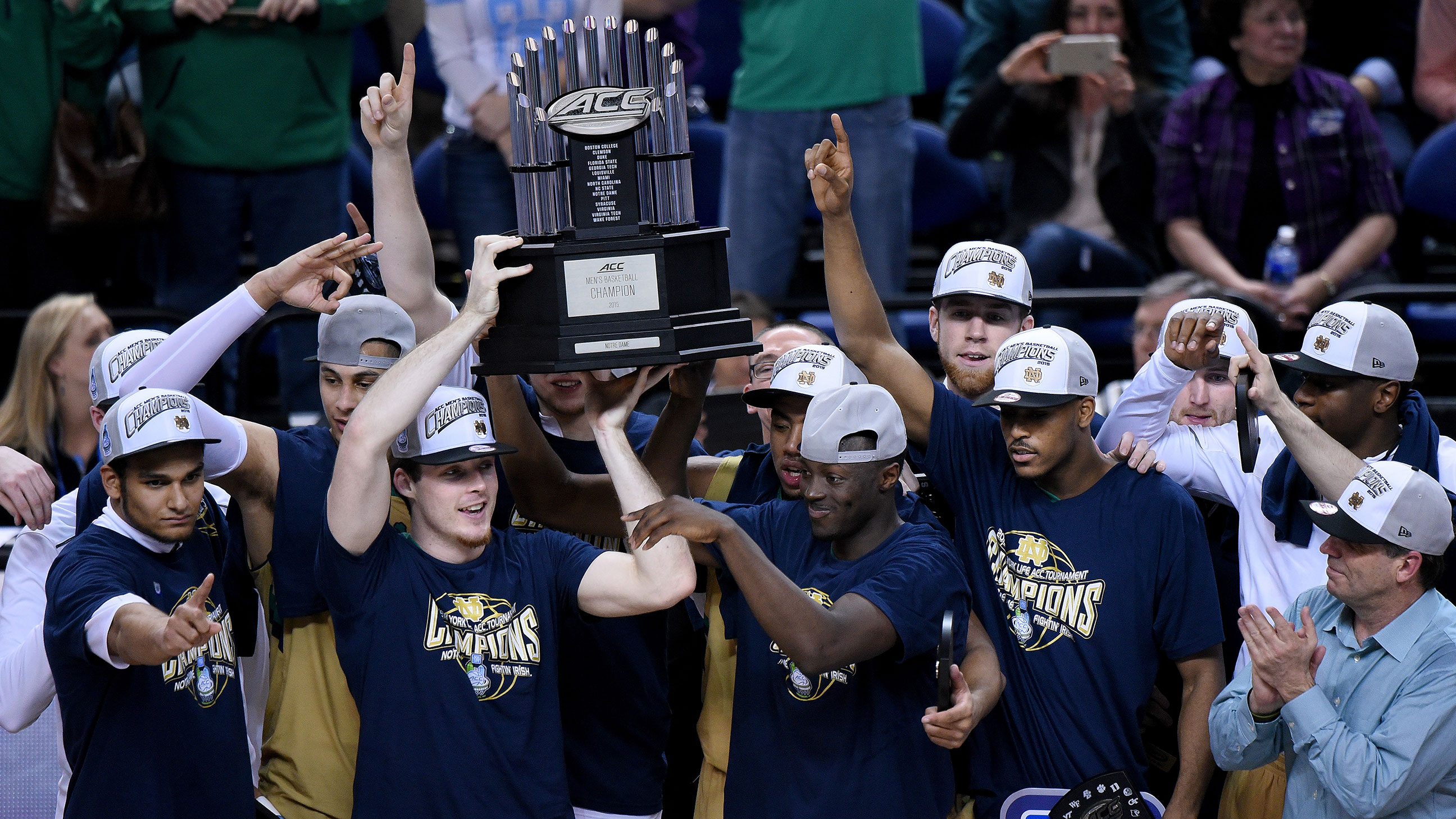 Winning a conference tournament means almost nothing in terms of NCAA tournament success. In fact, it actually seems to hurt: Somehow, you’re better off winning nothing than just the conference tourney. Maybe tourney champs tire themselves out, but whatever the reason, those are the trendy teams you need to avoid. Regular-season conference championships, on the other hand, are a far better predictor of success.

In 2015, stay far away from Notre Dame, Iowa State, and VCU. I’m going to also caution against Michigan State, since it expended the same amount of man-hours in the conference tourney and earned similar trendy vibes from a near-upset of Wisconsin in the Big Ten championship.

This one is subjective, and there’s no real way to quantify it, but it plays out year after year. Who are the bad in-game coaches in 2015? You’ve got our old pal Rick Barnes at Texas, Johnny Jones at LSU, Travis Ford at Oklahoma State, Tom Crean at Indiana, Steve Alford at UCLA, John Thompson III at Georgetown, and maybe Scott Drew at Baylor. Then you have coaches like Roy Williams and Bill Self who adamantly refuse to adjust and are capable of both winning titles with the right components and dying out in the early rounds. This year, North Carolina and Kansas aren’t title-quality teams.

Since 2004, per Kenpom.com, 84 teams have had a top-10 offense or defense paired with an offense or defense that ranked worse than 70th. Guess how many made the Final Four? One: the 2012 Louisville Cardinals, who were an insanely good defensive team. Only three of these one-track bullies — 2014 Michigan, 2012 Florida, and 2011 Arizona — have made the Elite Eight. And 15 have made the Sweet 16. The takeaway: 82.1 percent of these teams did not make the Sweet 16 and 96.4 percent did not make the Elite Eight.

The teams to seriously avoid in 2015: Notre Dame (again), Davidson, BYU, Indiana (again), Iowa State (again), San Diego State (miserable offense), Louisville, and a special clause for Butler, which verges very close to the limit on the offensive side.

7. Pick a Standard Champion, But Be Careful With Kentucky

Ed Feng wrote about this earlier today: Kentucky is the team most likely to cut down the nets in Indianapolis, but everyone is going to pick Kentucky. Since we’re talking about exploiting market inefficiencies, the move is to pick a different team — a group like Arizona, which Feng suggests, or Wisconsin, which doesn’t seem quite sexy enough to garner the attention it deserves. Don’t pick Duke: The Blue Devils’ D isn’t bad enough to qualify for item no. 6, but it’s close. Don’t pick Villanova: The Wildcats have zero quality wins outside the conference. Don’t pick Virginia: The Cavaliers have lost two of their last three games, and we still don’t know who it is with a hobbled Justin Anderson.

I’m not saying you can’t pick Kentucky, but you should ask yourself if you really think a title is inevitable. If you pick the Cats, you’ll be fighting tooth and nail in the early rounds to beat the masses, whereas a Wisconsin or Arizona pick will give you a huge leg up if Kentucky loses. Then again, if you’re wrong and Kentucky wins, you stand no chance. Either way, though, do not pick Kentucky to go down early. 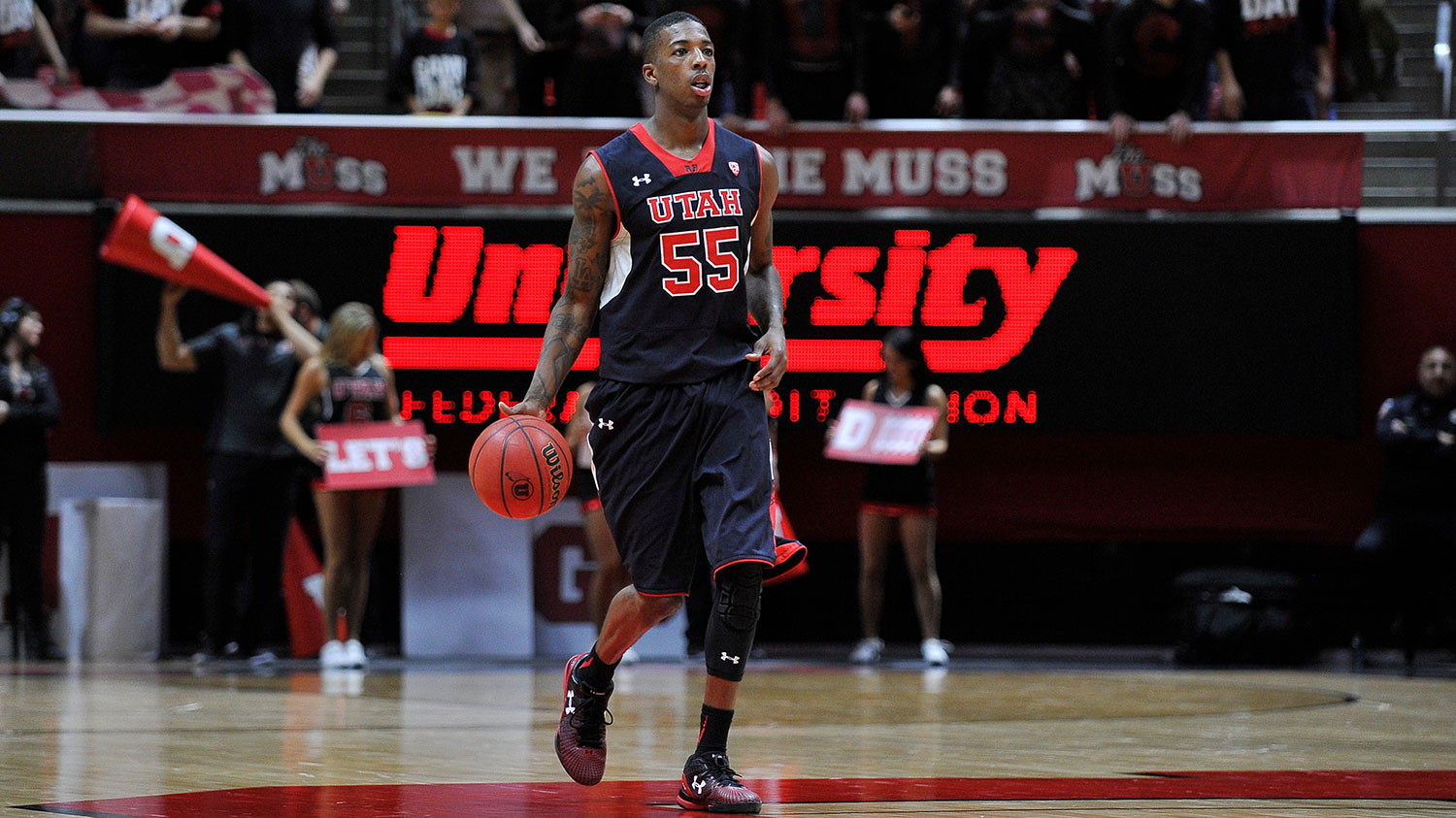 Last year, Tennessee came from nowhere and nearly made the Elite Eight, but the pre-tournament metrics showed it was a balanced team capable of outperforming its regular-season standard. Sporting the 18th-ranked offense and eighth-ranked defense in the country, the team that really stands out this year is Utah. The Utes have a weak coach in Thompson waiting in the round of 32, a beatable Duke in the Sweet 16, and a potential matchup with no. 2 Gonzaga in the Elite Eight. A Final Four run is not out of the question.

Until they can prove there’s any substance behind the hype, avoid MWC teams. This year, that means San Diego State (again), Boise State (somehow playing on the road against Dayton in the First Four), and Wyoming (playing a superior version of itself in Northern Iowa).

10. For God’s Sake, Stay Conservative in the First Round

If you have a really good reason and are dead sure the 5-seed won’t advance to the Sweet 16, MoneyBrackets grants you permission to pick a 12/5 upset, but for what it’s worth, I don’t see a terrific reason in this year’s bracket. Beyond that, do not pick an 11-, 13-, or 14-seed to advance.

Pick all the 9-seeds you want, because they actually hold a 61-59 lifetime record against the 8s. The 7-seeds, on the other hand, win at a 61 percent clip, so you need a solid reason to against the grain. Gregg Marshall against Crean is not a solid reason. Davidson’s insanely weak defense against a balanced Iowa team is not a good reason. Picking against Izzo is not the greatest reason, although I don’t hate Georgia. Thad Matta devouring VCU’s havoc defense, however, is a solid reason. There’s your winning 10-seed.

Only four times have true mid-majors made the Final Four: George Mason, Butler twice, and VCU. So I’m serious here, MoneyBracketologists: Do not pick Gonzaga. It’s not happening. It (essentially) never happens. I’m not hating on the Zags, because I think they’re a legitimately good team, but they could so easily lose to SMU or Iowa before meeting Duke or Utah in the Elite Eight. Don’t do it. I’m picking the Zags to go down to Iowa, risky as that may be, based on item no. 14.

It can be overcome, as we saw with the Badgers last season, and Wisconsin and Virginia are very, very good teams. Just know that they tend to play closer games because there are fewer possessions. If you’re thinking of taking a plodding team like that deep into the bracket, make sure you trust them. This is the reason that, as much as I like Utah, I can’t take it over Duke in the Sweet 16.

As we saw against Wisconsin and Virginia, Duke beats even very good slow-paced teams; even if the Blue Devils struggle early, they’re just one blazing streak away from erasing what will always be a small deficit. That’s how they stole the game in Charlottesville, and it’s why I won’t pick the Utes past the Sweet 16.

14. Find the High Seed That Can’t Win Past a Certain Round and Dump Them Earlier

I’m thinking of Kansas here: The Jayhawks won’t beat Kentucky, so why not take a flier on Wichita State, a severely underrated 7-seed, to beat them? If you think Virginia has Michigan State’s number and the Spartans will be leg weary after the Big Ten tournament, why not pick a defensively strong Georgia team to upset them in the first round? Think Maryland is too good for a struggling West Virginia? Take Buffalo as your one 12/5 gamble. As long as the upset is credible, this is a great way to steal points without costing yourself much (if anything) in the later rounds.

15. Don’t Leave Yourself Uncovered on Upsets

Consider this a corollary to the previous point: It’s OK to pick Kansas to lose in the Sweet 16 because you can safely bet that even if you’re wrong, it won’t cost you points by advancing past Kentucky. Pick against Duke, on the other hand, and you better be right, because the South Region is hot garbage and the Devils could easily advance to the Final Four despite a weak defense. You’ll be costing yourself dearly.

With all of that in mind, it’s time to put my MoneyBracket where my money is. The 2015 picks: 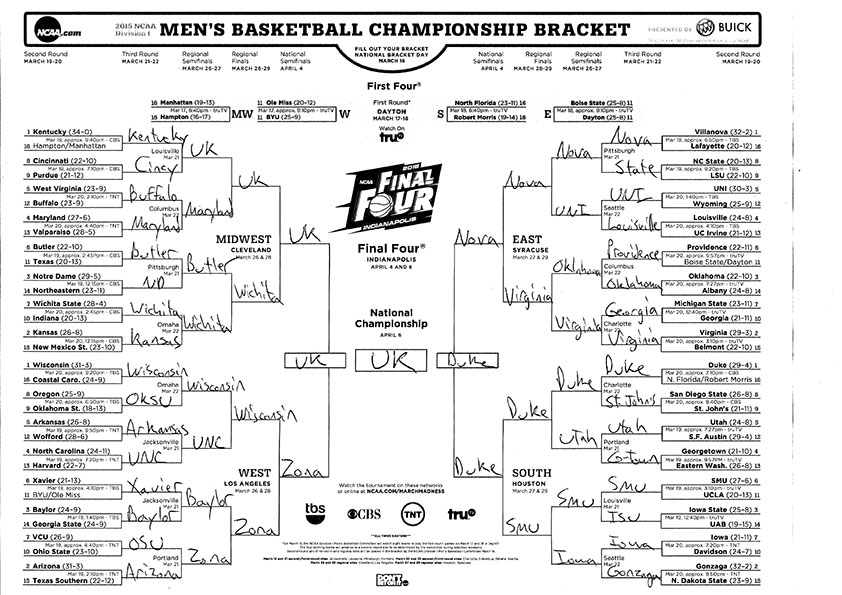 Good luck! Hopefully you will not need it.