Oh God, You Blue Devil: How Duke Did Away With the Badgers 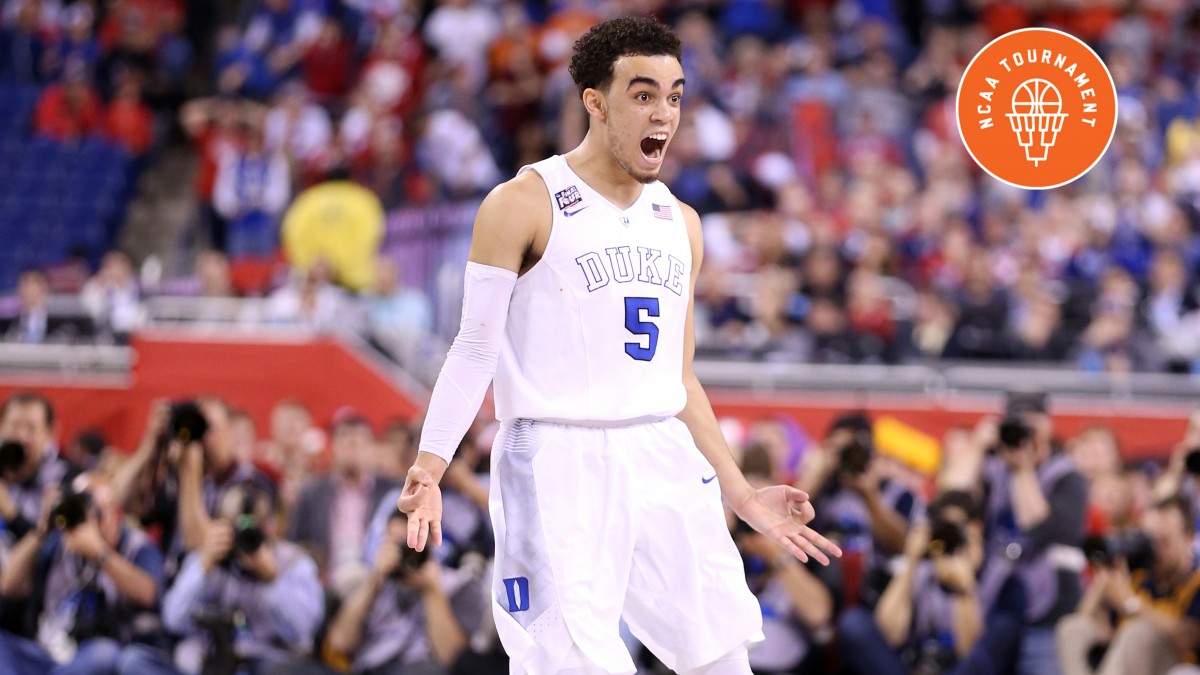 At halftime of Monday night’s frantic NCAA men’s championship game, I happened into conversation with one of Mike Krzyzewski’s fellow Hall of Fame coaches, someone I’ve known for a while, and someone who knows not only where the bodies are buried, but also where they hid the shovels. The game was tied at 31-31. Duke’s gifted young center, Jahlil Okafor, had two fouls, which is exactly as many as Wisconsin had as a team. This was no surprise. All year, Wisconsin’s trademarks were that it did not turn the ball over and it did not foul. Everybody in the building knew that, including Krzyzewski, which is why he spent almost the entire half yapping at the officiating crew. If he’d gotten any closer to them, they’d all have been picking out china patterns.

All the Grantland coverage of the 2015 NCAA tournament, right here.
There are many things that make a great basketball coach. One of them is recruiting talents like Okafor, and point guard Tyus Jones, and surprise star Grayson Allen. One of them is knowing what to do with that talent once it turns up in your gym. And another is working the refs, and what Krzyzewski did with Joe DeRosa, Michael Stephens, and Pat Driscoll was nothing short of a masterpiece. He chewed their ears in that first half like Mike Tyson at an audiologist convention. Still, though, it was 31-31, and Wisconsin had only as many fouls as Okafor. Things seemed to be going according to Hoyle. But the veteran mentor saw what was coming.

Sure enough, come the second half, just as the Badgers took a nine-point lead, the world turned upside down. Wisconsin was up to 10 team fouls with just under 11 minutes left. Duke was in the double-bonus situation for the last seven and a half minutes of the game. By the time the championship ended, at 68-63, Krzyzewski’s fifth title was headed back to Durham and the Blue Devils had attempted 16 free throws in the second half to Wisconsin’s three. This was a whopping statistical anomaly. So, before we get to the rest of the game — and it was a terrific one, all the more so because it was so ragged and scrambled — let us salute DeRosa, Stephens, and Driscoll. Nice work, gents. You defied the math, beat the odds, and managed to do your jobs despite having Krzyzewski dancing across your collective cerebrum. The man is a stone mind-bending genius. That cannot be denied.

We should talk a bit about the players, though, because Krzyzewski’s Jedi mind tricks were only part of what got Duke its title. Okafor wasn’t a factor at all, but Jones and Allen were almost all of the Duke offense for a very long time. Especially the latter. After a timeout with 13:17 to play, and the Badgers leading 48-39, Allen scored the next eight points and completely threw the game into reverse.

“I saw openings to drive,” said Allen, who introduced himself to the Final Four crowd on Saturday with a flying dunk against Michigan State that livened up the rout considerably. “I just wanted to stay aggressive and go up and try to draw a foul.”

“Grayson,” Krzyzewski said, “put us on his back. We went to him kind of exclusively because of his ability to drive and penetrate. And he did. He finished. He got 16 points, hit his free throws, and got a steal.” And it was Jones who simply commanded the tempo all night, waterbugging on offense and driving the Badgers mad on defense. His hands were everywhere. At the beginning of the game, Wisconsin seemed to be operating at 78 rpm in a 45 rpm game, rushing almost everything on offense, and Jones was a big reason for that. He ended up with the tournament’s Most Outstanding Player award.

All night, in fact, the Duke backcourt was simply too fast for the Wisconsin guards, at both ends of the floor. Bronson Koenig couldn’t keep up with Jones, and Josh Gasser kept driving into trouble trying to shake Quinn Cook. So when Allen came in with fresh legs and some real bounce to his game, he was able to get to the basket with relative ease and, having done so, was virtually sure of coming away with at least a couple of free throws. On the surface, because both teams relied so heavily on freshmen, both Duke and Kentucky seemed to pose similar problems for Wisconsin. But, watching each team play the Badgers, you quickly could see one important difference. Kentucky was (probably) more talented than Duke, but Duke was quicker. The Badgers found driving lanes all night against Kentucky that never opened up against Duke. Matt Jones shut down Sam Dekker and played havoc with everyone else.

For his part, Dekker fell on his sword. “I don’t know what I shot tonight, but I was short off the first. I guess I just wasn’t in a rhythm like I had been lately. Give credit to Duke for throwing a lot of different defenses at me. I was trying to contribute any way I could, but I’m putting this one on me. I just didn’t do enough for our team. I’m pretty disappointed in myself.”

In truth, though, what worked for Dekker against Willie Cauley-Stein on Saturday simply wasn’t there against Matt Jones. Duke was better at playing against Wisconsin than Kentucky ever would have been. “Horses for courses” is a very underrated factor in judging good basketball teams against each other.

“We were fabulous down the stretch,” Krzyzewski said. “Our defense down the stretch was magnificent. I don’t know how you can be any better than we were down the stretch, except for Tyus going in for that layup when he should have taken it to the side, and I wanted to break his neck.”1 There’s no denying that Duke had a put-away it could call on throughout the last five minutes of the game. Once it got into the lead, it made every play it had to make.

“This has been our one goal that we were working for,” Tyus Jones said. “No matter if it was getting up extra shots, or extra running, trying to get in better shape, tough practices, just believing in one another. We knew that at the end, if we did accomplish this, it was all going to be worth it.”

After the game, his exhausted voice in tatters and whispers, Bo Ryan nonetheless did a job of tap dancing that would have shamed Gene Kelly in Singin’ in the Rain. “What a fantastic job these guys did all year,” he said right off the top. “They just came together to do all the things that they accomplished. Highest offensive efficiency. A team that committed the least number of fouls during the year. A team that got to the free throw line. So these guys played 30-some games that way. It’s just unfortunate that this one had to be played out that way.” Later, when he was asked directly about his team’s sudden trip through the looking glass in the second half, he bridled briefly, but then spoke again in fluent subtext.

“You can’t say anything about the officiating,” Ryan said. “C’mon. Are you trying to set me up? You want to reword that? What are you saying? Have you ever watched me during a game? I don’t think this was any different.

“We have these things we practice, OK? We practice that when an offensive player jumps into you, we always call it on the offensive player. It’s just what we do. So there were some situations where obviously our guys felt they were in position. I’m sure they felt they were in the right. But I’ve been with these guys a long time, and I watched a lot of basketball. Sometimes, games are played differently, and you have to go with the flow.”

Then, right at the end, when he was talking about the granite-tough 21 points and 12 rebounds he’d gotten from his star, Frank Kaminsky, who shot a mere six free throws, Ryan again left it up to more cynical imaginations than his own. “He was a gamer,” Ryan said. “He was getting banged around like crazy. I was kind of hoping he’d get to the line a little more. It just wasn’t the way it worked out.”

The NBA Groupon Games: Which Players Are the Next Free-Agent Steals?