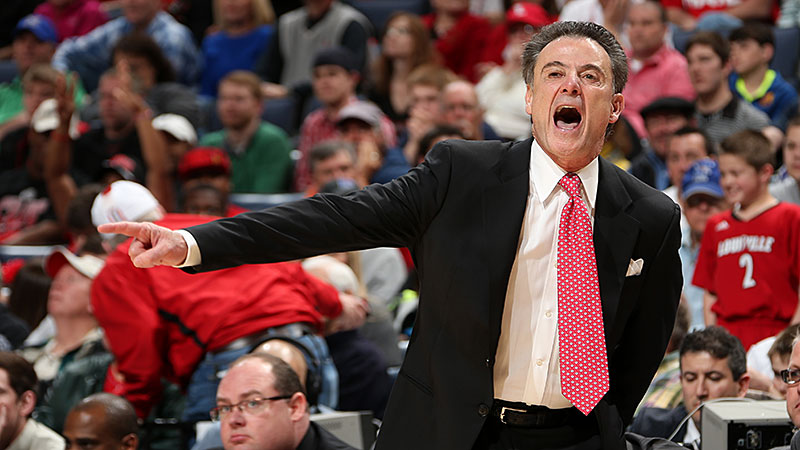 You want to win your bracket pool. I know this. I also know it’s not for the money, or even for “bragging rights.” You want to win for the same reason I want to win: It gives you the temporary feeling that you actually know something, that you are more insightful than the average person. It’s a wonderful sense of superiority, and I would go to great lengths to find that high in 2014. This is greedy of me, because last year, I had one of the best brackets of my life — two Final Four teams (Louisville, Syracuse), nearly a third (Ohio State), and the eventual champion. I won all my pools, plus a survivor pool, and was rolling like a pig in the sweet, sweet mud of my own self-aggrandizement.

But last year I had a solid handle on things. This year? I’m confused. The bracket feels like chaos to me, and chaos is unpredictable. So: Lacking whatever mental resources I had at my disposal in 2013, it’s time to play MoneyBrackets (a horrible play on “Moneyball”). In other words, we’re resorting to tricks based on science, hoping to gain minute advantages over the average American bracketeer. Here are 10 trendy mistakes to avoid as you try to sneak a win and pretend you’re either Brad Pitt or Jonah Hill. (Hint: Pick Pitt.)

Man, oh man, there are some sexy 8- and 9-seeds this year. Marcus Smart and Oklahoma State? (More on the Cowboys in Item 7.) An underrated Kentucky team full of talent? A Memphis squad that is not only ranked 26th in both polls, but that also beat Louisville twice? And Pitt, a team with great metrics that played Virginia and Syracuse tough four times this season, losing by five points or fewer, and beat UNC in the ACC tournament? So, so tempting. These are the Edenic serpent of the middle seeds. There’s an argument to be made for all of them.

But HOLD UP. This database from the Washington Post, which collects results from every NCAA tournament since 1985 (and which is incredible, so please excuse me for 18 hours while I play with it), when the field expanded to 64 teams, shows that 1-seeds are 101-15 against 8- or 9-seeds. That’s 29 years and 15 upsets, or about one every two years. You might be thinking that means there’s a better than 50 percent chance at least one will take place this season, but that’s a mistake of perspective. Here’s the truth: It is extremely unlikely we’ll have more than one 8- or 9-seed making it into the Sweet 16, and even if one does, you have a poor chance of picking the right one. Meanwhile, if the 1-seed you pick to lose wins, you’ll be losing points against everyone who took them to the Sweet 16.

I’m not saying you should go chalk all the way to the Final Four, but for god’s sake, don’t be a hero too early.

2. Don’t Take Louisville Over Wichita State in the Sweet 16

This one is tough, because like a lot of people, I think Louisville might be the best team in the country. Everybody is angry about the Cardinals getting a 4-seed (which was absurd, no matter the rationalizations). In the furor, everyone is forgetting that not only did Wichita State make the Final Four last season, and nearly beat Louisville, BUT IT ALSO JUST WENT UNDEFEATED. I don’t care how bad a conference is — going undefeated is insanely hard. It’s why no team has reached the tournament with a flawless record since UNLV in 1991. These Shockers have experience and an excellent coach, and, again, have not lost. All year.

Wouldn’t you give them at least an even chance against Louisville? Maybe more? And when you consider that everyone will be picking Louisville in that game, it’s like free money to go with the undefeated 1-seed. FreeMoneyBracket.

3. Don’t Get Fancy With Your Champion

There are five teams you should be picking to win the whole thing: Florida, Virginia, Wichita State, Louisville, or Arizona. (Yes, I know I just said not to pick Louisville … shut up.) That’s it. In most pools, picking the champ is good for 32 points, and you don’t want to screw around with that. Since ’85, there have been only three champions seeded fourth or lower (none since ’97). And this year, even the crop of no. 3 seeds is particularly bad. Duke can’t play defense, Syracuse has played about one decent game since February 1 and will probably not make it to the Sweet 16, Creighton is the classic “fun but will never, ever make the Final Four” team, and while Iowa State is going to be seriously tempting, don’t be suckered in by the next big pitfall …

4. Stay Away From the Trendy Conference Tournament Winner

5. Ignore the Glimmering Snowcapped Allure of the Mountain West

Don’t go up that mountain, my friends. It’s just a lot of thin air and clouds. Fool me once, shame on you; fool me twice, shame on me; and if anyone gets fooled for a third time by the Mountain West, he or she should be shamed in the public square by Jerry Tarkanian. This year, we’re lucky enough to have only two Mountain West teams in the dance, and my advice is to pick both to lose in the first round. It’ll probably happen anyway, and it’ll save you the temptation of choosing either one for the Sweet 16, which, believe me, is stupid.

For me, the answer is “very good.” I’m a big believer in Virginia, and you already know my feelings on Wichita State. Then there’s Florida, the consensus top team in the country. I believe there’s a good chance all three will make the Final Four, and a very good chance they’ll at least reach the final weekend. By picking all of them, you maximize your chances at getting the points from two, which may be good enough by itself to win your pool.

But because we’re not robots, and because there has been just one season when all four no. 1 seeds made the Final Four, we need an oddball region. And the oddest region is also the weakest: the West. Arizona is missing its best player in Brandon Ashley. The 2-seed Wisconsin Badgers will lose a close, low-scoring game like they do every year. We already know to ignore Creighton at no. 3 and San Diego State at no. 4 (Mountain West), and Baylor at no. 6 has one of the worst game coaches in the country in Scott Drew. All of which leaves …

Oklahoma. This is your oddball. Solid 12-6 performance in a tough Big 12, great offensive metrics, OK on defense, and has experience beating Iowa State, Oklahoma State, Baylor, Kansas State, and Texas … all tournament teams. To me, the Sooners are the perfect oddball Final Four team.

7. In the Early Rounds, Never Choose the Inferior Game Coach

Ride guys like John Beilein, Sean Miller, Gregg Marshall, Rick Pitino (seriously, I’m so angry those two teams have to play so early), Tony Bennett, and Bill Self. Be wary of icons like Coach K and Roy Williams who seem to have weird occasional lapses in big tourney games. Completely stay away from the likes of Drew, Travis Ford, Rick Barnes, and Mark Gottfried. Nobody, and I mean nobody, should be picking Oklahoma State over Gonzaga.

8. Never Forget That “Balanced Offense/Defense” Beats “Great at One, Bad at the Other”

As I found here (ctrl-F “watch out for Maryland”), teams with great offenses and bad defenses rarely — almost never, actually — do well in the tournament. Teams with bad offenses and great defenses rarely even make the tournament. Which means you need to be super, super wary of the following teams: Ohio State, VCU, Duke, Creighton, Michigan, San Diego State, Cincinnati, Iowa, and Baylor. Each is weighted very heavily to one side of the ball, and all it takes is a bad shooting night, or a few defensive breakdowns, to turn them into very bad teams. Three of those teams happen to be in the bottom half of the Midwest region, and UMass and Texas aren’t great either (plus, Rick Barnes), which means you might want to take a really, really close look at Tennessee, with its great, balanced metrics, making an Elite Eight run.

9. Don’t Be Too Impressed by a Mediocre “Major Conference” Team

Back to our friends at the Post: Controlling for teams seeded between 5 and 12, major conference teams are only 163-119 (58 percent) against minor conference teams. Change that to no. 6 through no. 11 seeds, and the record drops to 105-96. Seeds no. 7 through no. 11? 56-64 — a losing record! And in just the 8-9 games, major conferences are 26-30. This proves the whole “They played against stronger competition all year!” argument has always been dumb. Advantage Gonzaga, BYU, and New Mexico in Round 1. And the numbers make sense, when you think about it. Any mid-major that earns a 10-seed or better is probably very good, and a lot of major conference teams in that range are middle-of-the-pack at best. Hell, I even grant permission to wait until the round of 32 to eliminate a Mountain West team.

You will be rattled by about 2 p.m. on Thursday. It’s a given. Just remember that bracket pools are won and lost in the Final Four, not the first round. Be patient. Be calm. Be confident. You are a MoneyBracket Pro. (Unless you lose a Final Four team in the first round, in which case you should cry, set fire to your brackets, and threaten me on Twitter.) Good luck!

About Last Night: A Sneak Peek Into Madness