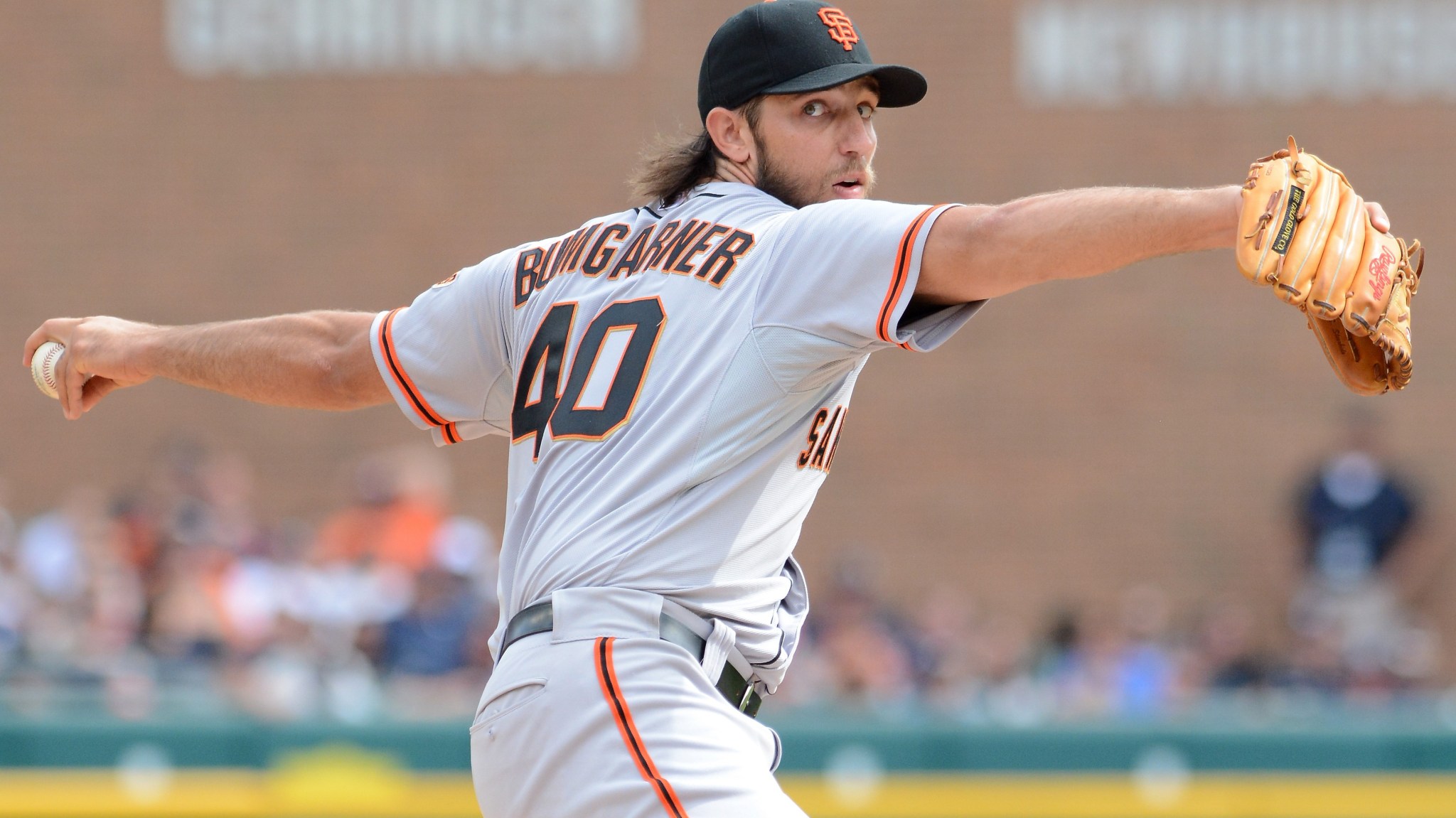 Loyal PitchCraft fans may remember the Midseason Awards, when along with doling out prizes for the top pitches, we had some fun with the weirdest pitches of the year — slowest, most comical, most arcane. LISTEN UP: THE FUN IS OVER. Today is the biggest day in the PitchCraft calendar, and I’ll be damned if I see it corrupted by jokery. The year-end awards are upon us, and anything less than a sober, scrupulous account of the season’s best pitches would be a callous show of disrespect to The Game. (Also, the slowest and fastest pitches remained the same from the first half. Come on, pitchers … not one of you could’ve lobbed a 34 mph eephus in there? I’m looking at you, Bartolo Colon. You used to be eccentric. You used to be cool.)

We have 11 very serious awards to hand out, and pitchers tend to ramble in their acceptance speeches, so let’s get cracking.

Knuckleball of the Year: Steven Wright

The tyranny of R.A. Dickey is over! Which is nice, because I didn’t want to give any awards to someone playing for a Canadian team. Enter Steven Wright, who Wikipedia calls a “distinctly lethargic” comedian born in 1955. He’s also a reliever for the Boston Red Sox who earned a call-up in August and has pitched his way to a 3.38 ERA in five appearances, throwing the knuckler almost exclusively. Are those numbers roughly the same as Dickey’s, but with a smaller sample size? Sure, maybe. But one of PitchCraft’s stated goals is promoting the next generation. Also, I love comedy. Also, this pitch:

Screwball of the Year: Hector Santiago

I’ll level with you guys: This isn’t exactly a deep field. Julio Teheran has thrown one ill-advised screwball this season, and other than that, it’s down to Trevor Bauer and Hector Santiago. After hours poring over the data, I decided to give the award to Santiago since he hasn’t allowed a hit on the screwball yet this season. (In 14 pitches, but WHATEVER.)

Forkball of the Year: Kevin Gausman

Again, we’re not dealing with a ton of depth here. The only practitioners of the endangered forkball are Gausman and Junichi Tazawa, and there are some who think the forkball is actually a splitter. The pitches are usually distinguished by horizontal movement — the splitter runs to the pitcher’s arm side, while the fork tumbles straight down. I don’t want the forkball to die, so I’m keeping it as a distinct category, and Gausman has been better than Tazawa this year.

With that, we move to the offspeed pitches featuring more than three contenders …

Curve of the Year: Dellin Betances

Controversy! Here, in a major category, a RELIEF PITCHER wins?? What’s happened to PitchCraft?!?! I’ll tell you what’s happened: Only a year after Mariano’s retirement, the Yankees have another bullpen demigod who mostly throws just one pitch. Betances’s curve (or slurve, per the Washington Post) has been thrown 644 times this season, yielding an incredible .075 average and .124 slugging percentage, by far the best numbers among pitchers with at least 300 curves thrown on the year. It’s very fast, at 83.91 mph, and it produces whiffs on 53 percent of all swings, third-best in baseball. Most impressive of all, it’s one of just two pitches the man throws. With two strikes or a favorable count, there’s anywhere from a 62 to 70 percent chance the curve is on the way, which is sort of an insane number, even for a reliever. And even though everyone knows it’s coming, it still can’t be hit.

Slider of the Year: Corey Kluber

Kluber is our first repeat winner from the Midseason Awards, and though I looked for reasons to switch it up, the pro-Kluber evidence is just overwhelming. Not only is it high-quality for all the practical reasons I mentioned back then — lowest average, lowest slugging in the game among starters — but this thing is a godsend to GIF connoisseurs everywhere. The reason is simple; it has the best horizontal movement of any slider in baseball, breaking an average of 10 inches left while dropping nearly three inches (good for sixth). Aesthetically and functionally, this is the slider to beat all sliders.

Changeup of the Year: Felix Hernandez

Repeat winner no. 2! Best velocity, sixth-best vertical drop, and best opponent average make this an undisputed triple threat. You want a fourth thing? Sure — he’s thrown it 977 times, which beats second place in baseball by more than 100. That he makes such a high-volume pitch work so well qualifies the Felix changeup as not only the best in its class, but one of the best pitches in the game.

On to the fastballs …

Cutter of the Year: Adam Wainwright

I forgot to honor the cutter in the midseason post, which is unforgivable when you consider the way a great cutter can complement a fastball … moving at almost the same speed but breaking back to the glove side when a hitter expects it to run like a normal fastball. Waino, as I have no right to call him since I dislike the Cardinals, is a master of the cutting arts. There are exactly 25 starters in baseball who have thrown 500 cutters this year, and among those Wainwright has allowed the lowest slugging percentage (.300) and the lowest Isolated Power (.067). It’s not a vicious strikeout pitch, and the movement/velocity isn’t off the charts, but it’s a wonderful “primary” pitch for a player with a very diverse repertoire. Paradoxically, consistency and unpredictability make Waino’s cutter the best in the sport.

Splitter of the Year: Joaquin Benoit

Another reliever! Total anarchy! Like many other winners on this list, though, Benoit combines aesthetic GIF-tastic excitement with excellent results. For pure looks, he has the second-best horizontal movement, ninth-best vertical drop, and 10-best velocity among baseball’s splitterati. More impressive still, he gets whiffs on more than 58 percent of all swings, and nobody else even touches that magical 50 percent mark. The results are terrific; an MLB-best .059 average and slugging, and literally zero extra-base hits even though he’s thrown 247 of them on the season. Or how about I put it this way: In 68 at-bats, the splitter has yielded 41 strikeouts, one walk, and four hits. HOW DO YOU STRIKE OUT 41 PEOPLE IN 68 AT-BATS?? Here’s how:

Sinker of the Year: Zach Britton

There’s a larger debate to be had here, which is whether it’s unfair to include relief pitchers on the same level as starters. Variety is important at all levels, but far more important for a starter; relievers have a much better chance to survive, and thrive, with a limited arsenal. This year, Zach Britton is perhaps the best example of a reliever who has been dominant with essentially one pitch. Call it the Mariano Rivera Award, after the man whose cutter made him the best closer of all time. As mentioned above, Dellin Betances is absolutely in the conversation, but the fact is that Britton has been even better.

In 2014, his 1.70 ERA and 36 saves for the Orioles are testament to the pitch that he throws more than 90 percent of the time: the sinking fastball. Comparing him to other starters and relievers with at least 200 sinkers thrown (Britton has thrown 928 as of Wednesday), he has the highest whiff-per-swing rate, the third-best put-away percentage (how often he strikes batters out in a two-strike count), the best ground ball rate as a percentage of balls in play (78 percent), the fifth-lowest opponent batting and slugging average (.188/.258, numbers that put him second and first, respectively, when you set the pitch minimum to 500). In summary, he’s either striking you out or inducing grounders, and he doesn’t look half bad doing it, as we see here in a sequence against Matt Adams:

HUGE UPSET! Felix Hernandez won the top prize at the halfway mark, but Bumgarner’s excellent second half pipped the King for the year-end award. As Tom Ley noted at Deadspin, Bumgarner is a master of control and — somehow — whiffs, despite a pretty ordinary 92.69 mph average velocity. He’s deadly when operating up in the zone, and he’s not afraid to throw the pitch with two strikes, which makes him somewhat unique. The numbers bear him out — his sub-.200 average against is fifth-best among starters, and he’s the tiniest fraction shy of David Price for the best whiff-per-swing percentage. One metric I find really interesting, called True Average, puts Bumgarner’s fastball at second-best in the league. The truth is, though, this is probably not the most valuable four-seamer in the game. But with the way MadBum gets 100 mph results with a 92 mph heater, I think it’s the coolest, and isn’t that what PitchCraft is all about? I say YES!

BONUS: THE REAL SLOWEST PITCH OF THE YEAR!

You thought I’d leave you on a serious note? Normally intentional walks don’t factor into the velocity standings, but thanks to @DarenW and this site, we have a winner. Take it away, Max Scherzer, with your 40.6 mph lob to David Ortiz:

Money Talks: Why Phoenix Had to Sign Eric Bledsoe