World Series Rooting Guide: Picking a Team Based on What You Value in Life 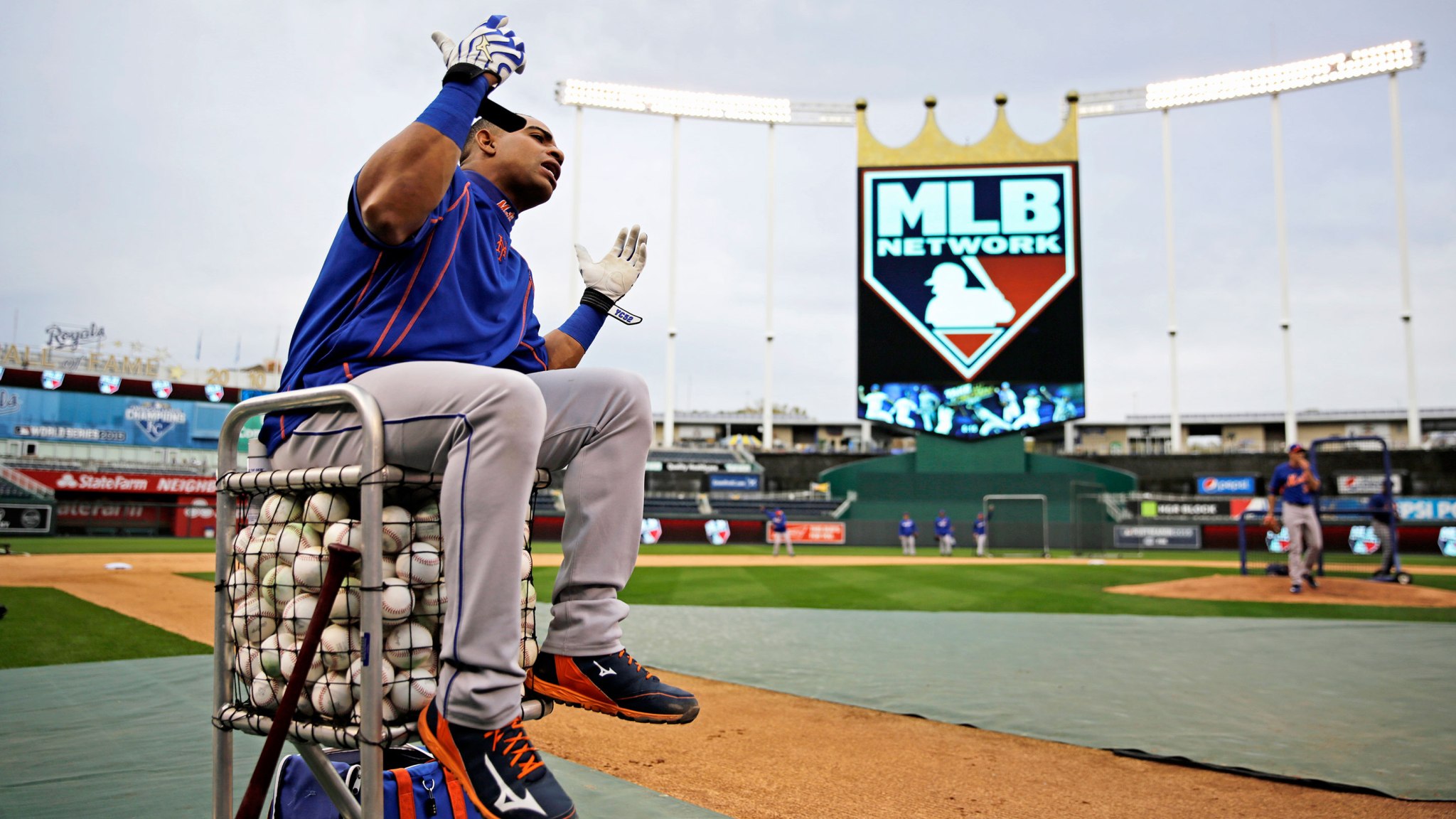 It takes about eight months to get from the start of spring training to the start of the World Series. That’s a long time; I know a couple of med schools in the Caymans that’ll certify you as a cardiologist in eight months. But at the end of it, because 28 teams and their fans are left out, most baseball fans come to the end of the road without a rooting interest.

The good news is that, as always, everything will be just fine as long as everyone out there does exactly what I tell them to. Here’s a list of rooting options, based on what different people might consider important in life.

Let’s get the easy one out of the way early. I’m usually not a huge fan of white guys who have long hair into their late twenties, particularly when they wear a hat of some kind to work. But Jacob deGrom has such glorious hair that he’s the exception to that rule. Noah Syndergaard’s flow is also pretty good, even if he’s getting way more into the “Thor” aesthetic than is probably healthy.

Our enemy has been vanquished…….Odin is pleased #LGM

And you could argue that the Mets have both the handsomest player of the 2000s (David Wright) and of the 2010s (Yoenis Cespedes, who has exquisitely sculpted eyebrows).1 “Look good, play good” seems to be the rallying cry for the Mets this year.

The Royals have Johnny Cueto’s dreadlocks and a few good, well-groomed beards — particularly Eric Hosmer’s — but they lose points for Alex Gordon and Mike Moustakas, who went full Napoli after it stopped being cool. Then there’s Edinson Volquez. As a young man, Volquez wore beautiful Cueto–ish hair, but he flew too close to the sun and apparently burned it all off. Poor guy. 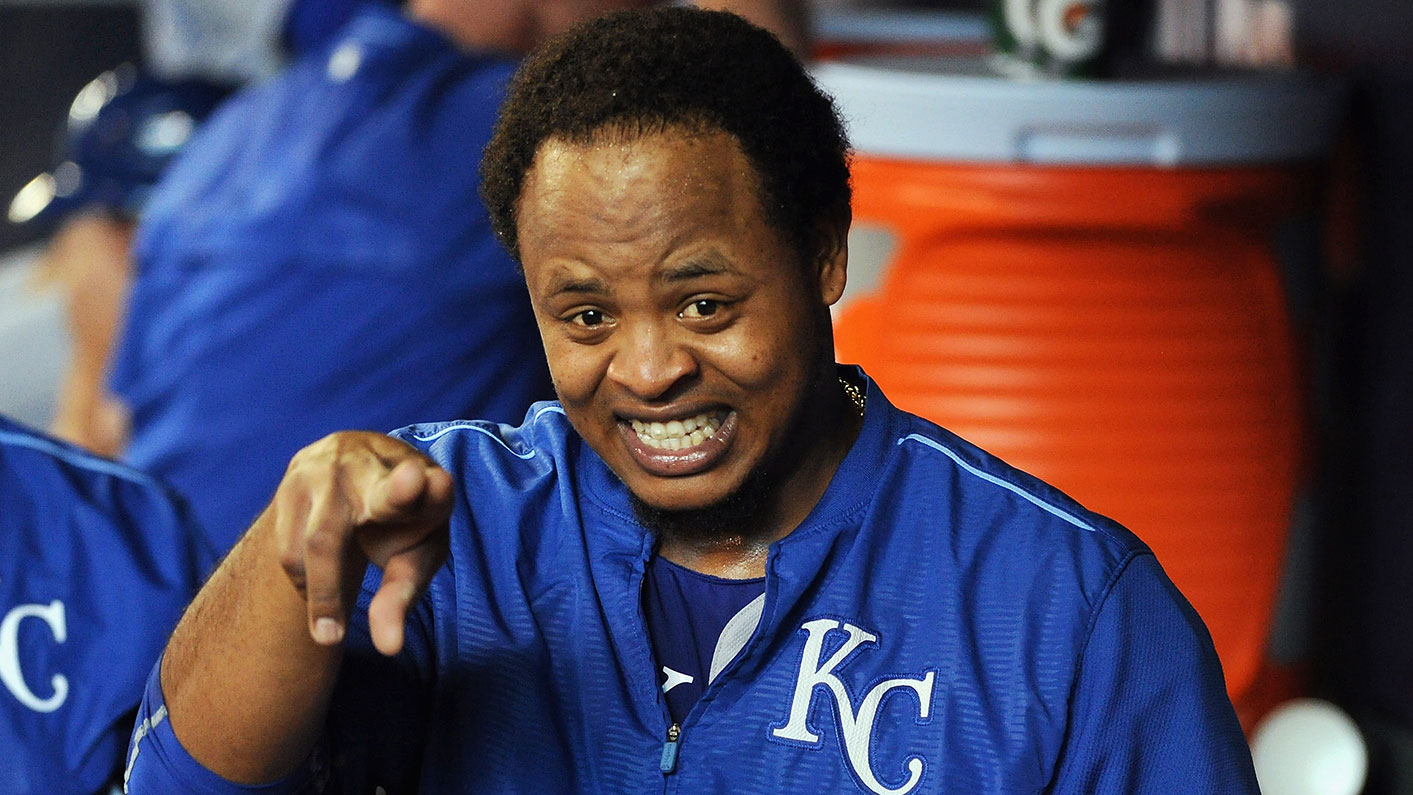 From an aesthetic point of view, I really don’t like where baseball is going. Strikeouts and home runs are individually exciting, but on the aggregate they make for a lot of standing around. I like baseball better when the ball is put in play a lot: It gets more people involved and rewards athleticism, even if it’s not the mathematically optimal strategy anymore.

This is why the Royals are oodles of fun. Their batters had the lowest walk rate in baseball, and the lowest strikeout rate by far. Despite having two unbearably slow starting position players, the Royals are suicidally aggressive on the bases, which leads to exciting moments such as Lorenzo Cain scoring from first on a single to win the pennant, or anytime Jarrod Dyson or Terrance Gore pinch runs.

In one corner, Mr. Met, with his creepy Mr. McGibblets eyes and disproportionately large head.

In the other corner, Sluggerrr, who’s a lion. In itself, that is fair enough: The lion is the king of the jungle … king … Royals — you get the idea. Except, Sluggerrr’s crown isn’t on his head, it’s in his head, growing out of his cranium like some fucked-up homage to the Three Score and Ten in Hyperion. If mascots are made to be marketed to children, these mascots must have been designed by people who don’t like children very much, or at least love to cause them pain.

You could go either way with this one. If you want a good summary of the sins of either of the two owners who could lift the Commissioner’s Trophy, read what Jeb Lund wrote for Rolling Stone about the 15 worst owners in sports; Mets owners Fred and Jeff Wilpon and Royals owner David Glass are on there.

I really view this as a choice between two kinds of rottenness. There’s the wide-reaching big-E Evil in Glass, who made his billions running Walmart and is more or less the kind of person you’d expect to put a cartoon smiley face on such an enterprise. On the other hand, you’ve got the Wilpons, who fell for a pyramid scheme and responded by cutting spending back to Tampa Bay–ish levels. They then demonstrated that their flair for administrative and financial incompetence is matched only by their gift for irony by opening a one-of-a-kind Amway storefront at Citi Field. Worse, Jeff Wilpon allegedly had a female team executive fired for having a baby out of wedlock, which is a fascinating sentence to type in the 2000s. The Wilpons are probably not as bad for humanity as Glass is, but their missteps just feel more conscious and personal. Like, you’d want Glass to paint the outside of your house with a roller, but you’d get the Wilpons to do a meticulous still life. If you were fond of whatever color human misery is.

The tiebreaker is that it’s hard to look at the amazing month of Mets second baseman Daniel Murphy and not have it feel tainted by his unfortunate preseason comments about Billy Bean’s “lifestyle.”

And although this piece is mostly a series of jokes about deGrom’s hair and Sluggerrr’s terrifying head tumor, I’d like to take a moment to consider an extremely serious topic: What should a fan do when his or her favorite team is populated by people who do or say bad things?

The obvious solution is for people who say hurtful and ignorant things, or who commit acts of heinous economic injustice, not to be involved in baseball, but that doesn’t seem like it’s going to happen anytime soon, and it leaves us without an answer that satisfies me completely.

One option is to ignore everything that happens off the field. Most Mets fans are Mets fans not because they believe their team to be morally good, but because of geographic factors. A team’s performance or character does not reflect the moral righteousness of its fans, after all, and we’d be better off if more people realized that. But how could you celebrate someone who not only thinks you or someone you care about is somehow inferior, but thinks it strongly enough to say so to a reporter?

Yet, it’s kind of self-defeating to reject something from which you derive great enjoyment because some people involved in making it do or say bad things. Life is a series of compromises in which we support or participate in certain institutions in spite of their imperfections, and if we care enough about those institutions, we can demand they change for the better.

That’s how I wound up, ironically, taking the same “hate the sin, love the sinner” stance on Murphy that Murphy has on gay people. I don’t feel great about it, nor do I begrudge anyone who disagrees with my view one way or the other. It’s a complicated issue, but I can’t take a hard line when I know that the person who lifts the Commissioner’s Trophy in the next week or so will be a man who makes me feel physically ill.

It seems odd that the Royals could lose this one. Yordano Ventura finished second among qualified starters in fastball velocity each of his two seasons in the big leagues, after all, and Volquez has discovered the ability to periodically throw a baseball on a circuitous arc to the plate at 98 mph. That’s to say nothing of Kelvin Herrera and Wade Davis coming out of the bullpen. But if you look at the velocity leaderboard, you’ll get to two Mets — deGrom and Matt Harvey — between Ventura and Volquez. And if you lower the innings threshold, you’ll discover that Syndergaard missed qualifying for the ERA title by 12 innings and throws even harder than Ventura.

And then there’s the Warthen Slider. To understand what Mets pitching coach Dan Warthen does to his charges’ arsenals, you have to remember the part in The Muppet Movie where Fozzie parks his Studebaker outside the church where Dr. Teeth and the Electric Mayhem are practicing. While Fozzie and Kermit are asleep, the band does up Fozzie’s car in a ridiculous rainbows-and-bubbles motif to the tune of the best musical number in the whole movie.

Leaving your pitcher alone with Warthen is like leaving your car alone with Dr. Teeth: You’ll wake up, and what was once innocuous will have a bodacious paint scheme and a fast-spinning, hard-dropping low-90s breaking ball. 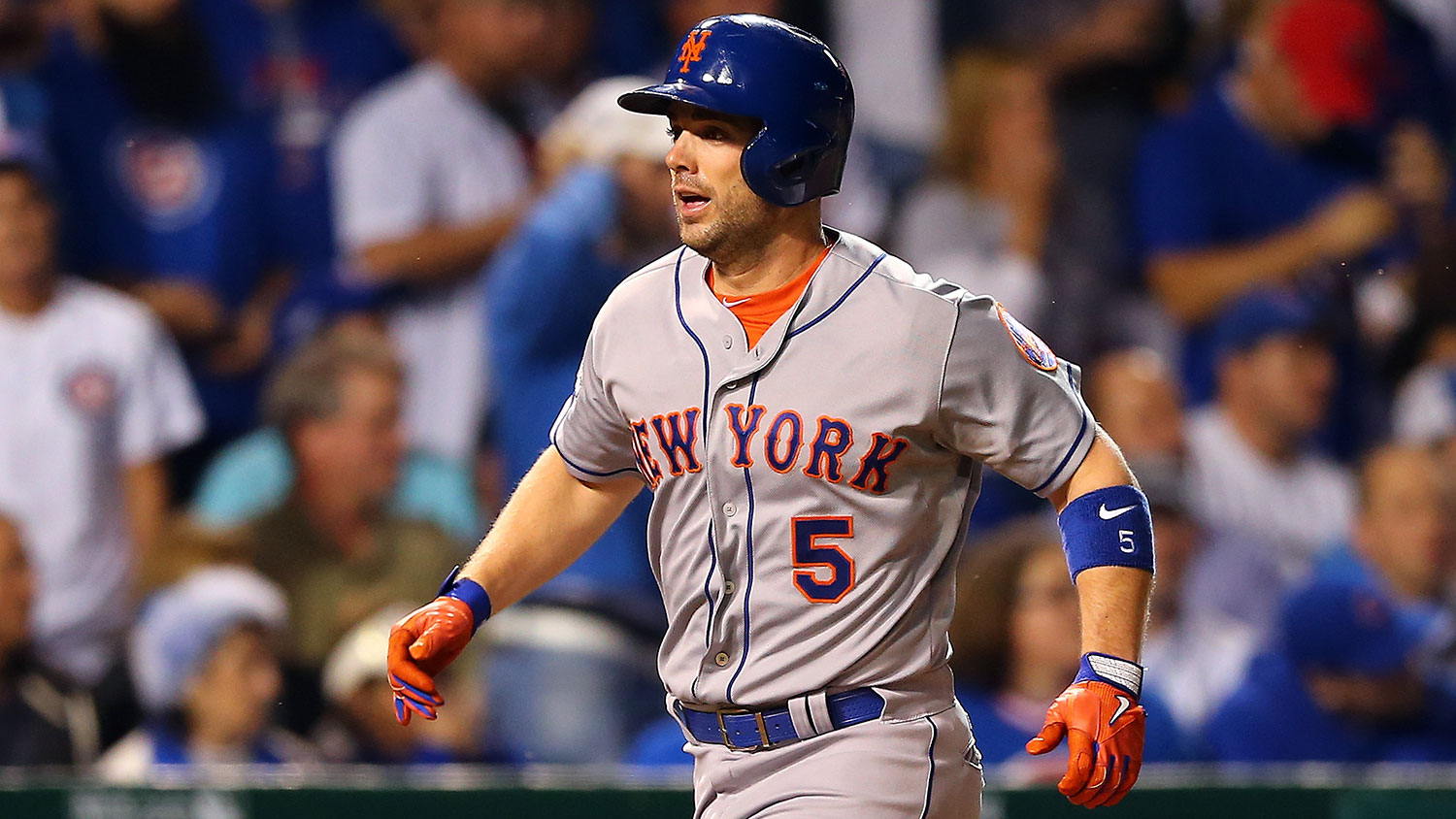 This is also easy. Wright’s orange undershirt has long been one of my favorite aesthetic choices in baseball, and Cespedes has made his neon, Allen Iverson–style compression sleeve a signature part of his look while not giving a damn whether it matches his uniform.2 Not that that color matches any uniform currently in use in North American professional sports.

This is probably the most important thing to consider. The Mets’ home alternate jersey — the bright blue with orange lettering — is my favorite jersey in the game, but they messed it up with the inexplicable decision to pair a solid top with pinstriped pants.

The Royals, meanwhile, have a uniform set that is both conservative and eye-popping. The home jerseys seem unnaturally bright on TV, the way a Cardinals-Dodgers game does. The blue accents match well with the colors of the home ballpark, and for both uniforms, the relatively clean design makes it stand out more when Gordon decides to cover himself in pine tar and roll around in the dirt. Everything is heightened by the Royals’ uniforms.

More specifically, Ventura. The Mets can be feisty when they want to be, but cooler heads often prevail. After all, an opponent broke Ruben Tejada’s leg with a dirty slide in the NLDS, and the Mets didn’t even throw at anyone in retaliation. That’s composure under fire.

On the other hand, getting Ventura to lose his cool has become a standard part of opponent strategy, because it works. Ventura got into it with the Blue Jays’ first-base coach, of all people, in Game 6 of the ALCS. This rarely escalates to full-blown punching, however, because if you want to fight Ventura, who is small and mouthy, you have to get through Salvador Perez, who is large and strong, first.

Salvador Perez’s Health: It Doesn’t Matter, As Long As the Series Ends in Four Games

This is what I value. Perez seems like a nice dude, and he’s a fun player to watch, but he takes an unbelievable beating behind the plate. Part of that is due to his size: Anything as large as Perez that is close to the batter’s box will soak up a lot of foul balls. But he’s also caught 2,441 regular-season innings in the past two years (second-place Kurt Suzuki is more than 300 away), and he’s about to go all the way to the end of the playoffs for the second straight season. This postseason, he’s taken a few brutal balls off the mask and been hit by two pitches as a batter, one of which was enough to get Ned Yost to take him out of a must-win playoff game, which would’ve been unthinkable a year ago. Nobody needs a vacation as badly as Perez does.

Our Annual Tiers of the NBA

The Eagles on the Brink