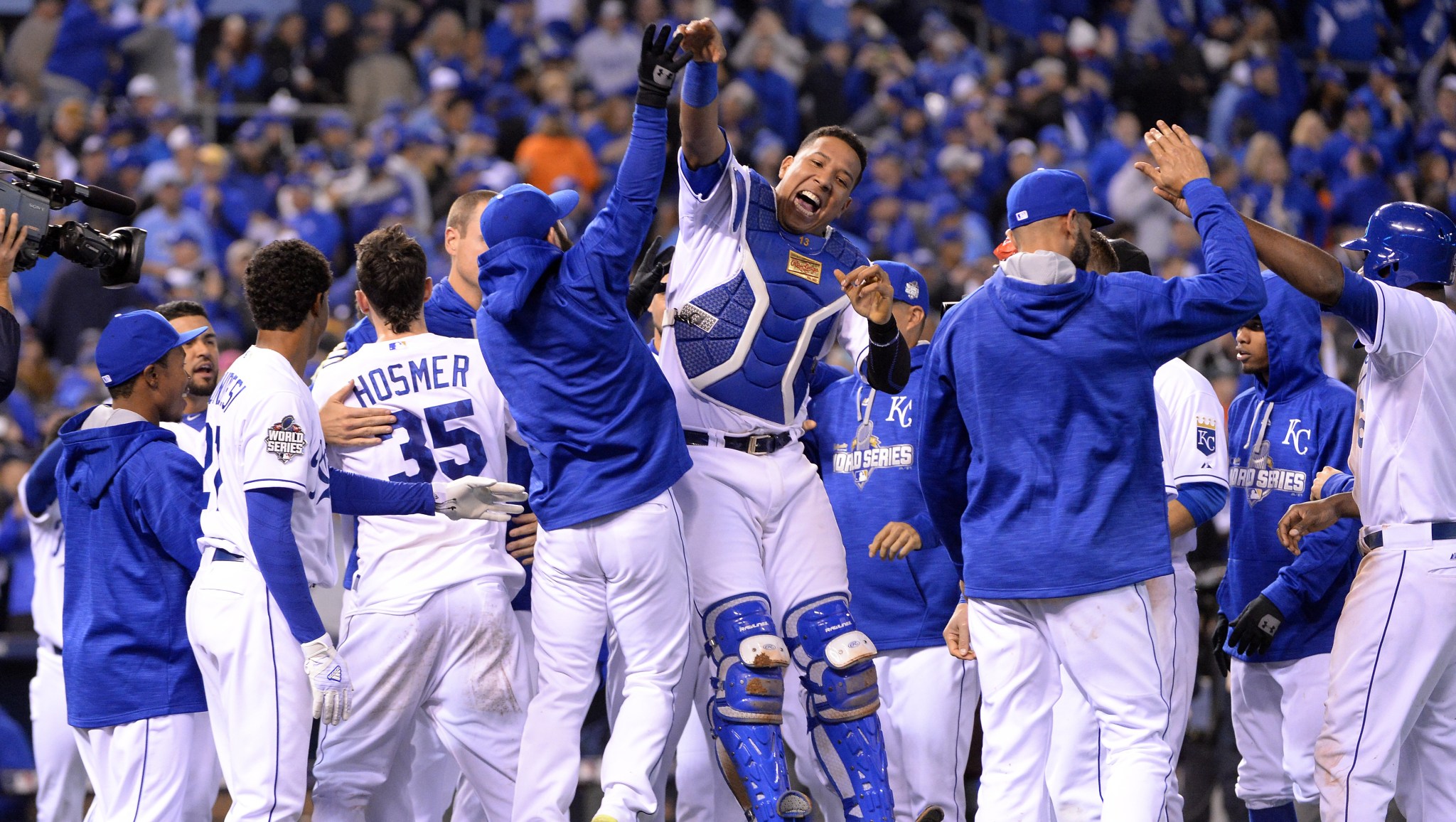 Officially, one of the longest, weirdest, most scintillating games in World Series history ended on an Eric Hosmer 14th-inning sacrifice fly. But this five-hour, nine-minute roller-coaster ride featured so many twists and turns, so many heart-wrenching moments on the field and so much weirdness off it, the blow that finally ended it almost felt like a letdown.

How do we process the first pitch thrown by Matt Harvey getting clubbed for an inside-the-park home run? The drive by Alcides Escobar into the left-center-field gap offered a stark reminder that no pitcher should throw anything within 85 miles of home plate to Escobar on the first pitch, because he swings every time. Harvey ignored the scouting report, grooved a fastball down the middle, and got crushed as a result.

Even then, it seemed like either left fielder Michael Conforto or center fielder Yoenis Cespedes should have tracked the ball down. But Conforto pulled up, expecting Cespedes to catch it, and Cespedes slowed up, too, kicking the ball far out of his own reach and making it easy for Escobar to circle the bases. In a limited sample of 40 games during the regular season, Cespedes rated as four defensive runs below the average center fielder according to Baseball Info Solutions, his admirable enthusiasm for the job in the face of Juan Lagares injuries a bit overshadowed by his lack of experience at the position. That’s what this was, too, as Cespedes’s failure to take charge on the play turned a potential out into an ugly homer. After never trailing in the NLCS, Harvey and the Mets fell behind after one pitch.

What can we say about Edinson Volquez taking the ball in Game 1 of the World Series, facing a far more talented opponent in Harvey, and battling him to a draw? Never regarded as a blow-you-away power pitcher, Volquez had suddenly started throwing smoke this postseason, with his 10 hardest pitches of the year all coming in Game 5 of the ALCS. Though Volquez didn’t dominate Tuesday night, setting up a scenario where the teams were tied 3-3 after six innings gave the Royals the advantage they wanted, given their superior bullpen and defense.

The circumstances of the night made the feat even more remarkable. Volquez’s father died earlier that day, creating a surreal scene in which millions of people found out on social media, but Volquez himself reportedly didn’t learn about it until after he’d been pulled from the game. Still, leaving the mound in a tie counted as a big win for Volquez. If the Royals’ other starters can do the same as this series progresses, K.C. becomes a heavy favorite to win it all.

Adding another layer of surreality was a bizarre power outage. Before the bottom of the fourth, electronics failures knocked Fox’s broadcast of the game offline. That led to TV viewers missing one at-bat (a Kendrys Morales strikeout); the game being further delayed because both teams lost access to instant replay; and that prolonged stoppage driving Mets manager Terry Collins up the wall because he didn’t want it to throw off Harvey’s rhythm and potentially knock the Mets starter out of the game. The outage also saw Fox’s broadcast trio of Joe Buck, Harold Reynolds, and Tom Verducci replaced with Matt Vasgersian and John Smoltz on an alternate feed. The quiet competence of Vasgersian and understated analysis by Smoltz served as a welcome respite from Reynolds’s complete inability to add anything of substance to the broadcast. When Fox finally got its original crew back on the air a little later, approximately zero people seemed happy about it.1

Back on the field there was Curtis Granderson, the non-leadoff man’s leadoff man, making a major impact. Granderson’s three-true-outcomes skill set might make him seem like a weird fit for the player who is supposed to jump-start your offense at the top of the order. But the Mets right fielder played a huge role in this game, whacking a go-ahead homer on an elevated fastball in the fifth, drawing his sixth and seventh walks of the postseason, and making what at the time looked like a game-saving catch — a running, stabbing, leaping, snow-cone grab of a Jarrod Dyson drive that prevented what might have been a leadoff triple in the 11th. Hosmer’s medium-depth fly ball to right became a sure-thing game winner in part because Granderson owns one of the league’s weaker throwing arms. Still, until that moment, few players had done more to shove their team toward victory than Granderson had.

Then Alex Gordon happened. Mets closer Jeurys Familia had been untouchable this postseason, firing 9.2 shutout innings and allowing just two hits in the first two rounds of the playoffs. But after getting the Mets out of a two-on, two-out jam in the eighth, then retiring Salvador Perez to start the ninth, Familia served up a sinker that didn’t sink, allowing Gordon to pummel that pitch high and deep over the wall in dead center for a shocking game-tying homer. Familia’s larger body of work in both the regular season and playoffs points to a pitcher who rarely makes such mistakes, which would suggest this might have been a one-off bad performance that won’t repeat itself. The Mets had better hope so: Though Addison Reed got the Royals in order in the seventh and Tyler Clippard nearly escaped a jam of his own making in the eighth before turning the game over to Familia, New York’s bullpen corps still can’t quite match K.C.’s even in the best of circumstances. If Familia keeps missing with location as he did with Gordon, that would make the gap between the bullpens more painful for the Mets.

While Granderson’s 11th-inning grab stood out as the Mets’ biggest defensive moment, it is tough to pick one by the Royals … because there were so many of them. In the third, Hosmer made a great diving stop on a Conforto hot shot wide of first, which was followed immediately by a Gordon sliding catch on a Wilmer Flores sinking liner in left. There was Mike Moustakas’s diving stop in the sixth that kept the Mets’ lead at 3-1 and presaged an immediate comeback in the bottom of the inning, and Perez gunning down David Wright at second base in the ninth, despite Luke Hochevar barely holding him on and Wright getting an obscene jump as a result. We got the predictable hackneyed Bill Buckner comparisons when Flores’s smash to first ate up Hosmer on a short hop and allowed the go-ahead run to score in the eighth. That marked just the second error of the postseason for K.C., and the team’s first unearned run allowed in 136 innings. But the Royals wouldn’t have been tied in this game to begin with (or in the World Series in the first place) if not for their superior glovework, an advantage they’ll carry for the rest of the series that raises the urgency for the Mets to build more early leads, and bigger ones if possible.

Unfortunately for the Mets, Wright’s defense didn’t measure up. The third baseman booted Escobar’s grounder to lead off the bottom of the 14th, then threw wide of first to give K.C. a leg up on a winning rally. Wright said after the game it was an in-between hop, combined with Escobar’s speed prompting a rushed throw, that did him in. The game’s best hitter (and overall dominant 2015 playoff performer), Ben Zobrist, then cracked his third hit of the night. Earlier in the game, Zobrist had shed his usual tack of working deep counts by ambushing two first pitches for ringing doubles. This time, he smashed a single to right on the fourth pitch of his at-bat, keeping up K.C.’s season-long trend of making hard contact. That knock put runners on first and third and all but assured the Royals victory that Hosmer would provide.

Perhaps the most unlikely and most lingering memory of Game 1 might be the two pitchers who were left to finish the game. With both teams’ best relievers spent and even the likes of shaky no. 6 starter Jon Niese tossing two shutout innings in relief, the managers turned the game over to veterans Chris Young and Bartolo Colon, two pitchers who between them had lived more than 78 years and made up the most striking matchup of height (Young is 6-foot-10) vs. girth (Colon weighs … a lot) in baseball history. Using his no-nonsense approach of pounding the strike zone, Colon got through two scoreless innings despite loading the bases in the 12th. The combination of Colon’s ample carriage and the staggering length of the game that gave us #WeirdBaseball had everyone feeling a little giddy deep into the night; if not for Wright’s error, the big man and his seemingly bionic arm might still be pitching right now.

Still, the game’s best overall performer was probably Young. And that’s trippy as hell. An 11-year veteran with serious shoulder issues in his past, Young returned from a year out of baseball in 2013 to somehow toss 165 quasi-effective innings for Seattle last year. He then found the perfect fit with the Royals this season, parlaying his high-contact, heavy-fly-ball, low-strikeout repertoire into lots of outs, in retrospect not that big of a surprise given the luxuries afforded by the defense behind him and his home park. Yet in Game 1, Young did something we hadn’t seen him do with any consistency in seven years: He struck guys out. Young’s performance in the 12th was one of the best innings thrown by any pitcher this October, with back-to-back-to-back swinging strikeouts against the heart of the Mets order: Daniel Murphy, Cespedes, and Lucas Duda. His final line for the game was a beauty: 10 batters faced, three innings pitched, no runs, no hits, one walk, four strikeouts. With that electrifying performance, Young has now struck out nearly twice as many batters per nine innings in this year’s playoffs (11.6) as he did during the regular season (6.1).

Adding one final twist to the evening was Young’s own dose of tragedy this year. Just last month, his own father died; the next day, he threw five shutout innings. Young was the only player told about the death of Volquez’s father before the game, because Young stood to be the emergency replacement starter if Volquez found out about his dad’s death and needed to be excused from pitching. USA Today’s Bob Nightengale was one of several writers who detailed Young’s own emotional burden, how Young empathized with Volquez, and how Young’s own father was in his thoughts throughout the most important performance of the 36-year-old, slop-throwing, skyscraping right-hander’s career.

In short, this game had everything: offensive heroics and disappointments, sparkling defense and the costliest of errors, great pitching laced with periodic struggles, laughs and absurdity crossed with sadness and longing. We could do without more tragedy for the rest of the series. But as for everything else — bring it on. Six more games just like this one, please.