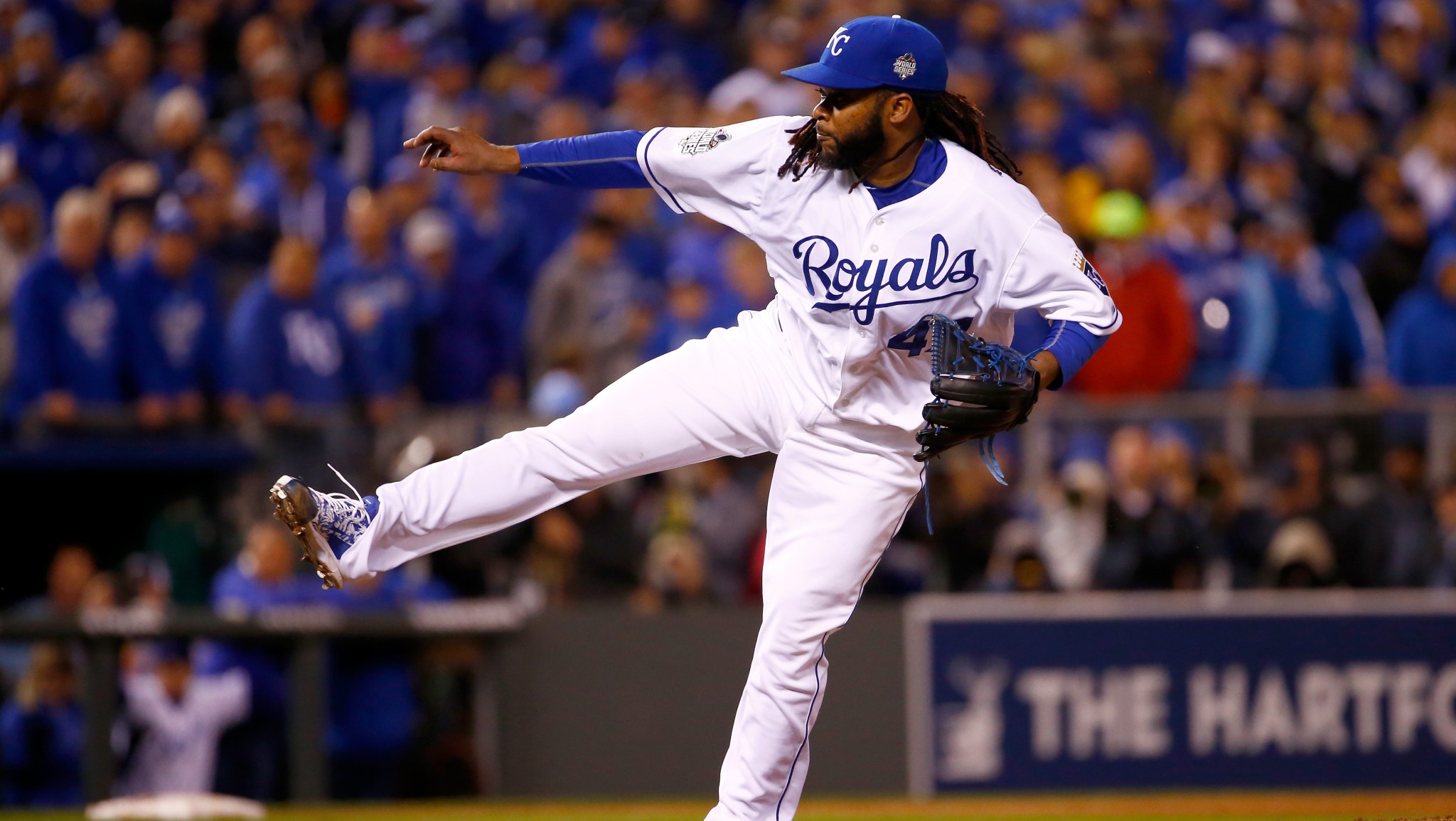 Johnny Cueto steamrolled the Mets on Wednesday night, becoming the first American League pitcher to throw a complete game in the World Series in 24 years and leading the Royals to a 7-1 rout. He did so by defying everything we know about pitcher dominance.

Baseball has become a game of strikeouts. This season, more than one in five pitcher-vs.-batter confrontations ended in a whiff. That 20.4 percent strikeout rate set an MLB record — the eighth straight season that hitters struck out more than ever before. The combination of pitchers throwing harder than ever and striking out carrying less of a stigma for hitters sets up every game as a potential marathon of punchouts.

Game 2 of the World Series was nothing like that. Neither Cueto, nor his mound opponent Jacob deGrom, nor any of the relievers who pitched in this game, had much success blowing pitches by hitters. The Royals cuffed deGrom and that Mets pen around as a result. Yet Cueto completely neutered New York’s bats, allowing just two hits, both of them weak, opposite-field singles by Lucas Duda. The hired gun acquired by K.C. before the trade deadline flummoxed the Mets with a barrage of quick pitches and shimmy-shakes, lighting up Kauffman Stadium with his trademark flair and charisma. But the actual results of Cueto’s showdowns with Mets hitters wasn’t all that dramatic … it was just a two-hour, 54-minute dirge of deception, weak contact, and balls hit right at fielders.

If you saw any of that coming, quit your job immediately and go play daily fantasy sports, because you’re a psychic who can beat a rigged game. Cueto’s last start before Wednesday’s was a debacle. Pitching in Toronto for Game 3 of the ALCS, he allowed eight runs in just two innings, surrendering six hits, walking four, hitting a batter, and giving up a home run for bad measure. Yes, the Jays were the best offensive team in the American League. But they also averaged just three runs per game in the other five ALCS contests, reserving their biggest onslaught for the Royals’ supposed ace. When Cueto turned around and fired nine airtight innings against the Mets, he became the first pitcher in playoff history to throw a complete game after allowing eight or more runs in his previous start that postseason.

Take a closer look at Cueto’s four starts this October and we see that boom-or-bust trend in full effect. Bill James invented a stat called Game Score that measures the quality of pitchers’ starts. You can find the Game Score formula here, but this is the gist: The highest Game Score of all time is 105 and any number below 50 is lousy. Here are Cueto’s four Game Scores this postseason:

So what exactly happened? How did Cueto go from being a potential key to victory for the Mets to reverting to the ace status he’d carried with him in Cincinnati for years, the status the Royals sought in that July trade?

It certainly wasn’t Cueto’s ability to make batters swing and miss. In fact, he induced a miss on just 6.1 percent of swings in Game 2, his lowest rate in any start of more than one inning since 2009. Piling up outs on balls in play was what actually fueled Cueto’s success.

Tom Verducci, who has been excellent as an analyst and is the de facto stathead in the Fox broadcast booth, noted two factors that could’ve contributed to Cueto’s start-to-start turnaround, both of those related to communication with his catcher, Salvador Perez. Over footage from that ALCS meltdown in Toronto, Verducci pointed to Cueto’s struggles with the signs relayed by Perez in that game. After multiple botched connections, the camera picked up Cueto trying to subtly signal pitch choices himself. The result was a remedial version of Sign-Stealing 101, with the Jays clearly able to identify what was coming, and in several cases whack those predictable pitches. Verducci also noted that the crossed signals between Cueto and Perez might have caused Cueto to slow the pace with which he pitched, which also could have hurt his performance.

Clearly signaling to the other team what kind of pitch you’re going to throw certainly qualifies as a plausible reason for a bad start. But the slow pace might be more of a symptom than a cause. We often hear that pitchers who are throwing well are also working quickly, and that those who are struggling are also taking a long time. Of course, that likely has a lot to do with pitching with the bases empty all game versus pitching with runners constantly on base.

Really, the reason Cueto pitched so well this time, and the reason deGrom gave up four runs and nine baserunners in five innings, comes down to a much simpler explanation: Cueto located pitches exactly where he wanted them, while deGrom didn’t. So while neither pitcher fooled all that many batters, Cueto still came out on top.

Half of the 122 pitches that Cueto threw in Game 2 were fastballs or sinkers, a ratio that’s consistent with recent trends. But time and time again, Cueto gunned fastballs that appeared headed for batters’ ribs, only to tail back over the plate and clip the inside corner. Cueto’s hard stuff was placed on the inner half of the plate or off the inside corner 62.3 percent of the time, the third-highest rate for that pitch in that location among Cueto’s 17 starts as a Royal.1 Watch the pitch he fires 35 seconds into the highlight below and you can see Cueto absolutely freezing the most dangerous hitter of the postseason, making Daniel Murphy look helpless with a fastball that defies physics and weaves its way back into the zone.

The fifth inning was the fateful one for deGrom and featured some dumb luck by the Royals. But the four runs K.C. racked up in that frame were mostly due to deGrom missing his spots. First, Alex Gordon continued his hot start to the World Series, drawing a leadoff walk — one of three times he reached base in Game 2, after his dramatic ninth-inning homer sent Game 1 to extra innings and ultimately led to a Royals win. Facing the light-hitting Alex Rios, deGrom grooved a high fastball, allowing Rios to crack a solid single to left, putting runners on first and second. That set the stage for the at-bat that swung the game and thrust the Royals into firm control of the series.

Whenever he’s asked why he leads off with normally light-hitting shortstop Alcides Escobar, manager Ned Yost simply replies that it works. And it has this postseason, with Escobar batting .364, including an obscene .478/.481/.652 line in the ALCS. Yet when Escobar came up to bat with the tying and go-ahead runs on base, Yost ordered him to bunt, which is what you do with a career .262/.298/.344 hitter. Escobar then proceeded to stab helplessly at the first two offerings from deGrom, quickly falling behind 0-2. For once, it looked like one of Yost’s peculiar in-game tactics might actually come back to haunt him and his team.

Only it didn’t. deGrom grooved a fat, spinning slider up and in the middle of the plate, and Escobar lined the pitch to center, knocking in K.C.’s first run and tying the game. The rest of the inning merely repeated deGrom’s previous mistakes. The pitch to Eric Hosmer that got smacked up the middle for a two-run single that gave the Royals a lead they’d never relinquish? Another poorly located slider, this one middle-middle. The eighth pitch against Mike Moustakas? A curveball that was supposed to be down in the zone that instead hung up long enough for Moustakas to cash in another run. deGrom threw far fewer fastballs Wednesday night than he normally does, grooved too many off-speed pitches, and paid the price.

deGrom threw his FB on 39.6% of pitches to lefties tonight. He averages 60.7%. #Royals lefties were 4-7 on ABs ending in an offspeed pitch.

As the Mets head back to Queens, they have to contend with some harsh realities. Their top two starters, normally fire-breathers who overwhelm opponents with their devastating stuff, struck out just four Royals combined. The Royals’ extreme contact-hitting ability was cited by K.C. backers as a potential equalizer against the Mets’ great starting rotation, and so far it’s proven true. The Mets will trot out yet another beastly right-hander for Game 3, sending Noah Syndergaard, his high-90s fastball, and hammer curve to the mound. Are the Royals then scrutinizing Syndergaard and sweating the law of averages catching up to them and enabling the Mets’ powerful starters to start beating them?

If they are, they have a funny way of showing it.

Lorenzo Cain mentioned postgame how well Syndergaard was throwing today. All these guys look alike to KC, and they intend to clout them all.