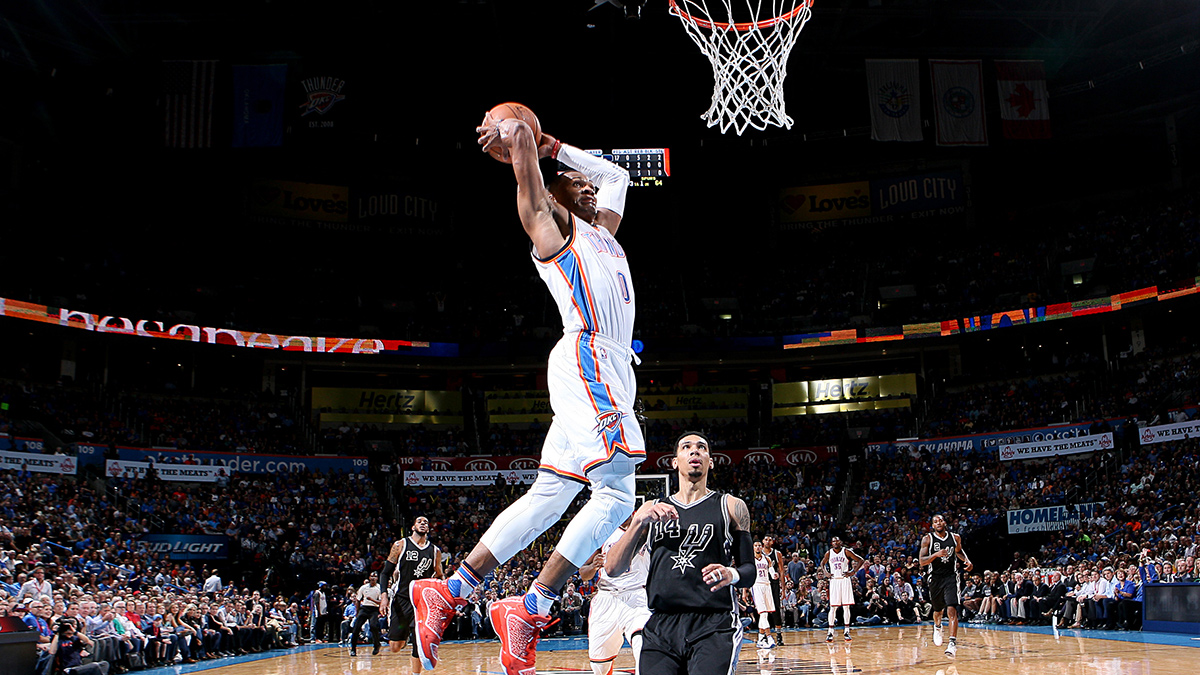 Kirk Goldsberry: Could this be the year of Kawhi Leonard? Who the heck knows? But it might be, and if it turns out that way, we can look back at this game and say it all started in Oklahoma. Sure, the Spurs lost, but Kawhi played out of his mind.

Lonely at the top. -CS pic.twitter.com/6RHscvE7Vw

He tied his career high with 32 points, but he also used those big hands to add eight rebounds, three steals, and two blocks, including this one on Kevin Durant.

For Those Keeping Score at Home 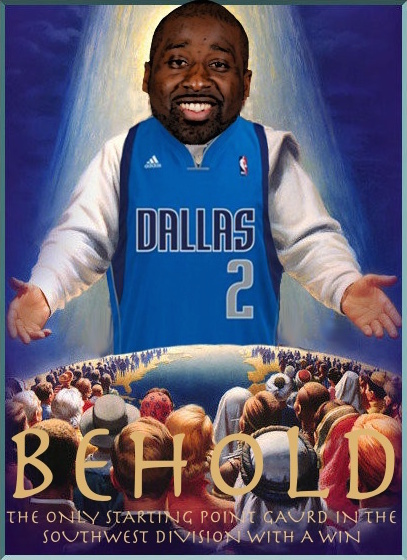 Everyone Made the Leap in Orlando 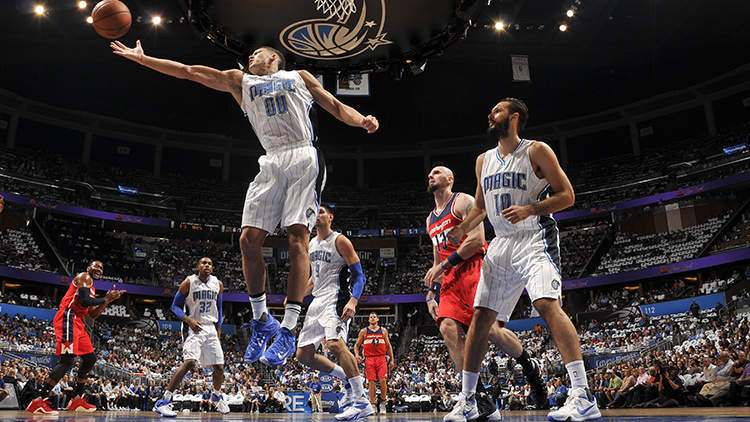 Andrew Sharp: We start with Mario Hezonja. We were never starting with anyone but Mario Hezonja. He entered last night as many things, but most of all, in an NBA context, he is still a 20-year-old rookie who couldn’t get playing time on FC Barcelona last year. But there he was on opening night, looking as natural as anyone on the court, bombing 3s in his first quarter ever. This was Step 1 in going from “Internet urban legend” to “real NBA player who will pull up from anywhere and hit it.” It’s Hezonja season. Welcome.

There were other transitions last night.

The Magic are in the same place as Gordon. They’ve been a total afterthought near the bottom of the East for the past three seasons. Last night told everyone those days are pretty much over. Whether they make the playoffs or not, they, like Gordon, will likely be a pain in the ass to play against all season long. That was Lesson No. 1 last night. Elfrid Payton almost had a triple-double, Tobias Harris added 15 points, and the defense was great. It’s crystal clear this team will only get meaner from here.

For now, though, Hezonja air-balled a jumper that would have put the game away. He also bobbled away a drive that could have done the same. There are different stages of The Leap that players and teams make. That was the other lesson.

Hezonja’s time will come, but in the final two minutes, John Wall blocked a layup that would have given Orlando a five-point lead. That led to Wall falling out of bounds and heaving a pass to half court to start a fast break that cut the lead to one. Four-point swing. Then he poked the ball away to cause a turnover on the next possession. Fifteen seconds later, he came out of a timeout, bounced into the lane, and hit the game-winning floater. It was all crazy, but it made a lot of sense: In the game where everyone involved was transitioning to a different plane of NBA existence, the difference was the All-NBA candidate who is about to become an MVP candidate.

Stat of the Night

Danny Chau: World, please don’t take this as a negative. Think of these turnovers like the colonies of bacteria in our intestines, or the active cultures in yogurt. Emmanuel Mudiay and Jahlil Okafor had excellent rookie debuts, both showing that the strengths on their scouting report can translate immediately in the big leagues. Those 11 turnovers ought to be celebrated like a badge of honor. Get that rookie-season high usage, son!

Hot Sauce in My Cup of Noodles

Jason Concepcion: Real talk: I was planning to use this space to scream KRISTAPS POR-ZIN-GIIIIIIIS until my breath came out in a tattered asthmatic rasp. And the Latvian was solid, his pale and willowy arms acting like glowing welcome signs, hypnotizing the Bucks into committing foul upon foul. The result: a Harden–esque 9-of-12 from the line providing the bulk of his 16 points (plus five rebounds and a block). But it’s a long season; there’ll be plenty of time for that.

Instead, I’d like to talk about DERRICK WILL-IAM-SSSSSSSS. Yes, Derrick Williams, a.k.a. the second pick in the 2011 draft, whose career, thus far, has given off nothing but a pungent bust-like stink. An existential tweener who himself seemed to not even know what position he should play, Williams spent his rookie-deal years in Minnesota and Sacramento infuriating his coaches while every so often cutting to the rim for spectacular dunks. Last season, George Karl compared his rebounding prowess unfavorably to that of a Coke machine. In other words, Williams showed every sign of being a bad basketball player. That might still be the case.

Or maybe it isn’t? He had a crackerjack preseason in his first action as a Knick, averaging 16 points on 57 percent shooting in only 21 minutes a game. Yes, I just cited preseason stats, but it’s always better to play well than to not. Last night, though, in the first real, actual, this-one-counts game of the season, Williams’s preseason form carried over. He keyed the Knicks’ second-unit buzz saw, scoring 15 points in roughly 12 minutes of first-half play, erasing a somnolent New York start. He was energetic and active, borderline twitchy, making decisive moves and smart, crisp passes. He created fast breaks and cut to the rim. He was like microwavable ramen noodles: quick to heat up, possibly trash, totally satisfying.

Now, do I trust him? No. I can’t shake the feeling that Williams, right now, is like the first month of a Ponzi scheme. Even last night, especially in the second half, he looked as if he might do something really dumb every second he was on the court. It’s just that he does everything with SO MUCH ENERGY that — again, right now, in Game 1 of the season — it’s all somehow working.

Hot Sauce on My Basketball 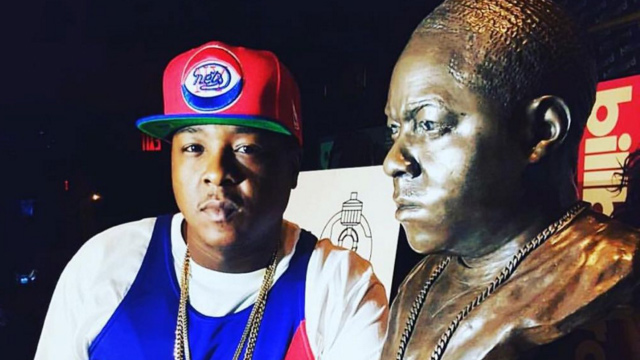 Ben Detrick: Over in Brooklyn, player introductions for the Nets’ season opener against the Bulls were handled by Jadakiss, the raspy, Yonkers–bred rapper. He wore a Julius Erving jersey from the ABA’s New York Nets and capped off the commencement with his mucous-y “ah-hangh!” ad lib. A bronze bust of Jadakiss was shown on the JumboTron; later, I ran into the sculptor. He described carrying the head in a duffel bag on a flight from Los Angeles, and he said airport security was concerned its hollow marble base might be concealing contraband (like a fist of heroin or plastic explosives or Komodo dragon eggs or whatever people smuggle).

The Bulls were cruising along by 19 when the Nets’ least-celebrated offseason acquisition decided the court was his own personal trough of bucatini. Andrea “Sheepshead Bae” Bargnani, en route to 17 points and seven boards, helped trim the lead to single digits by doing Bargzy things: hitting a spinning putback over Joakim Noah, air-balling a wide-open 3. His antics weren’t enough, and with several minutes left, the Barclays crowd began to file out as Chubb Rock’s “Treat ’Em Right” bopped over the speakers.

After the game, Jadakiss hosted a listening party for his new LP, Top 5 Dead or Alive, in the arena’s Billboard Lounge. There was a sea of music writers and label handlers and dudes who rapped verbatim to Jadakiss and French Montana’s “88 Coupes” (at least no one had the gall to recite the line “Flippin’ work / Comin’ back like Derrick Rose”). Off to the side, rookie Rondae Hollis-Jefferson, who notched eight points and five rebounds in his pro debut, had snuck in to watch, still wearing gray postgame Nets sweats. Brooklyn had lost its opener, but no one in the tangle of black-quilted puffer coats and leather jackets gave a damn.

Chau: Hours before Kobe had the Staples Center crowd rapturously cheering every one of his 24 points on 24 shots,1 on the other side of the continent, two of his mentees were doing what they’ve done all their lives: trying to be him.

In the final minutes of the season opener between the Indiana Pacers and the Toronto Raptors, Paul George and DeMar DeRozan took turns adapting recipes from the Modern Kobe Cookbook to fit their situation. George pulling up for a 12-footer off a curl on a baseline out-of-bounds play to tie the game. DeRozan sauntering into the frontcourt, then immediately backing into a smaller defender for a post-up isolation before turning toward the center of the paint and nailing a half-floater, and the foul. George, at the top of the key, driving past Cory Joseph and absorbing the contact for a hard-fought layup. DeRozan, against George on an isolation, creating space with a behind-the-back dribble into a 16-foot fadeaway with less than five seconds on the shot clock. It was basically a Civil War reenactment with artillery that only shot things from midrange. Neither player finished the game with a savory field goal percentage, which I suppose was part of the experience.

DeRozan was discombobulated to start the game. Say what you want about his hero-worshiping, cover-band approach to the game, but when he’s locked in, you can see the contours of a star player. He looked listless for much of the game, bricking free throws, unable to get a step ahead of his defenders, but he defrosted as the game progressed. Meanwhile, George was doing everything possible on the court except getting the ball into the basket. Frank Vogel’s controversial decision to move George to the power-forward slot suddenly became less about role and more about figuring out how to highlight a star with true potential as an omnipositional player.

The Raptors won in the end, and most of the credit probably goes to Jonas Valanciunas’s breakout and the elite defensive component DeMarre Carroll adds to the team that it didn’t have last season. But it was DeRozan who scored seven points late in the game and made some of the biggest plays down the stretch. And so we end on a Kobe–ism: It doesn’t matter how you began if you make your actions in those final ticks of the clock worth remembering.