The Tao of Dabo: How to Appreciate Clemson’s Coach 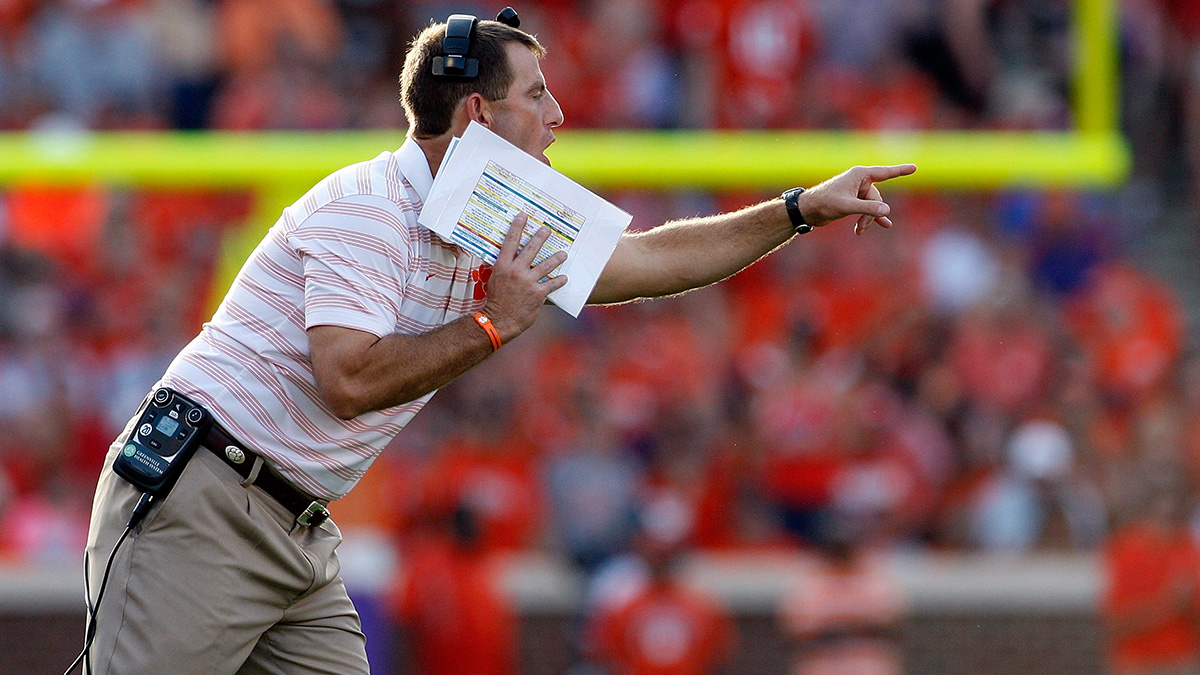 Best as I can tell, only one coach in America has publicly vouched for a strict policy of college athletes supplying their own viscera. This is something Dabo Swinney did late one night in the rain earlier this season, in the aftermath of a crucial victory over Notre Dame. It was the key part of an over-the-top and not-entirely-logical motivational speech of the kind Clemson’s head coach specializes in, a stemwinder that veered from an implicit defense of the principles of amateurism to a religious evocation to an endorsement of the postal-service creed to a promise to do the Nae Nae in the locker room.1

Swinney told his players they would have to “BYOG,” which is short for “Bring Your Own Guts,” which sounds like the tagline for a very special Walking Dead Thanksgiving episode but is actually Swinney’s way of exhorting players to step up their game. It is the kind of phrase that fits quite well on a campus bookstore T-shirt, but more than that, it is an evocation of Swinney’s coaching ethos: Everything comes straight from the gut. There is seemingly very little calculation to his public statements; the man believes what he believes, and if you can’t handle it, then you might as well step out of the way. Last week, Swinney kept his team on the field at halftime during a blowout of an overwhelmed Miami squad and delivered a lecture about treating the opponent with respect; a few weeks before that, faced with a meek question about Clemson’s Urban Dictionary–catalogued ability to choke in big games, Swinney deconstructed the query so completely that he dismissed every molecule of oxygen from the room.

These flashes of earnest zealotry are why, for the past few years, Swinney proved such an effective Wile E. Coyote for South Carolina’s trickster head coach, Steve Spurrier: Because everything Spurrier has ever said is tinged with irony. Swinney can be funny, but I don’t think he would embrace irony if the Road Runner clubbed him over the head. He is an intense man with a remarkable personal story and deeply held values that sometimes get him mocked. But the thing about Dabo Swinney is that he truly doesn’t care. The thing about Dabo Swinney is that his gut is what defines him.

There is a long tradition of Southern football coaches evoking religiosity, but Swinney (along with the far more chill Mark Richt at Georgia) is most prominent among the modern generation: A couple of years ago, a story in the Chronicle of Higher Education examined the Christian culture at Clemson, and how deeply it’s married to the football program at a public institution. Swinney insisted that he recruits athletes of faiths other than his own; he told reporter Brad Wolverton that he’d coached Muslims, that he had two Mormons on his team. “I’m a Christian,” Swinney reportedly tells recruits, according to Wolverton. “If you have a problem with that, you don’t have to be here.”

That phrasing can be interpreted in many ways: A group called the Freedom From Religion Foundation found it offensive enough that it filed a complaint against Swinney, charging him with “unconstitutional behavior.” Swinney responded that he’s “never been a guy who forced anything on anyone.” But if you move beyond the First Amendment issues, it gets at the essence of who Swinney is: He holds nothing back. Whatever’s inside him — all that viscera — is going to burst forth, whether you like it or not. That’s why, for his advocacy against paying college athletes, he wound up getting mocked as the human incarnation of vegetarian flatulence by noted Southern–football aficionado John Oliver; that’s why Spurrier continually got the best of Swinney when Swinney tried to go toe-to-toe with him in a battle of playful insults. There are not a lot of coaches who are willing to lay themselves on the line like Swinney does, and this is why he’s the perfect coach for a program that has inadvertently become its own punchline.

I mean, I know Swinney doesn’t think much of the term — and he raises a solid point when he notes that every major college in the country has lost a game it has no business losing — but there’s a reason “Clemsoning” has become an archived pejorative for such a happening. It’s because the Tigers tend to do it in the most embarrassingly public ways. In both 2012 and 2013, they lost only two games, but those two games were to in-state rival South Carolina and Florida State; they lost to Florida State again in collapsible fashion last season. In 2011, they were 8-0 before losing to unranked Georgia Tech, and then West Virginia bludgeoned them 70-33 in the Orange Bowl. No, this reputation is not entirely fair, given that Swinney has a solid overall record, but this is the perception that Swinney once again has to combat, given that his team is 7-0 and near the top of every power-ranking poll as the College Football Playoff selection committee prepares to convene.

This weekend, the Tigers face a perilous road game at NC State; the week after that, they host a Florida State team that may still be shell-shocked from its absurdist loss to Georgia Tech. Maybe this is the year Clemson finally transcends its reputation, and maybe this is the year that Swinney’s intensity finally disembowels the notion of “Clemsoning.” There aren’t many coaches with the outward fire of Swinney; there aren’t many coaches who follow their sermonizing by continually busting moves. “I want to win,” Swinney said, in explaining the purpose of his halftime speech during the Miami game. “I want to kill the opponent. But I want to do it the right way.”

I imagine there was not a trace of irony in that statement. I imagine Swinney does not view murder, in this metaphorical context, as a sin; I imagine, if Clemson keeps winning, that Swinney will continue to dispense the sort of wisdom that makes perfect sense to him, even if it takes a while for the rest of us to fully translate. It’s BYOG, or go home.

We Went There: Towns and Russell Debut, But Kobe Takes the Spotlight