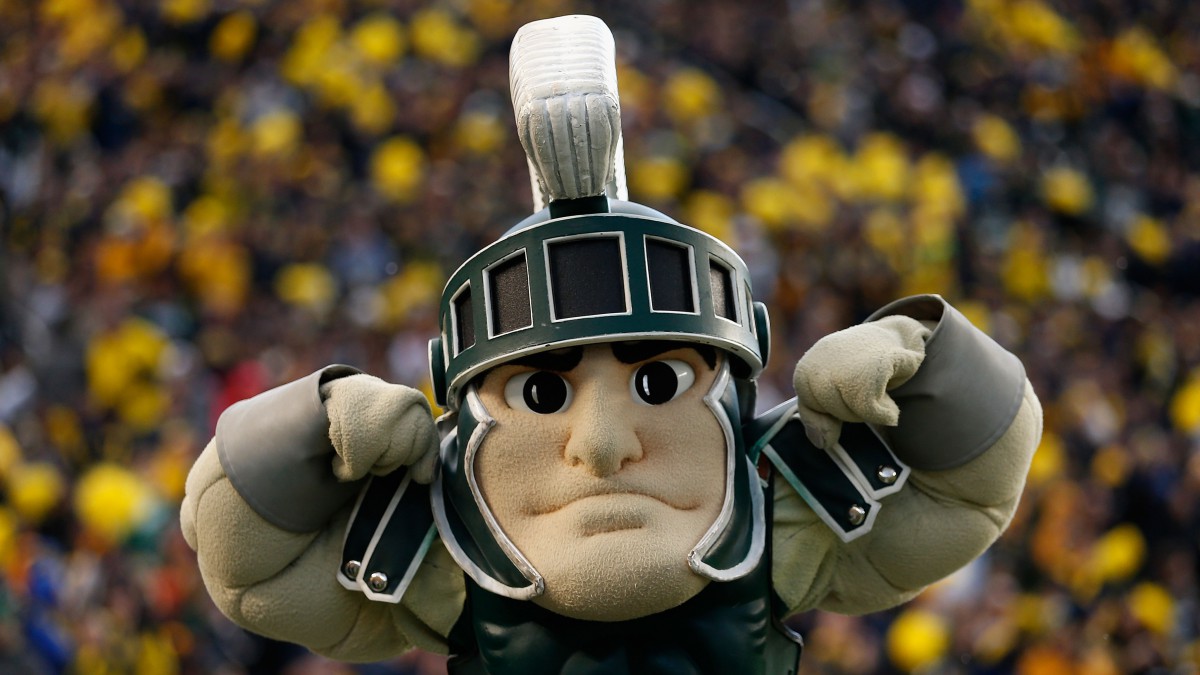 Week 8 finds the college football season at its exact midpoint, if you count Army-Navy as Week 15.1 Here we stand, balanced between a wholly chaotic first half of the schedule, and a back half where the stakes only get higher. It is, to be quite honest, kind of a lonely peak. Week 8 is so devoid of marquee power that GameDay is hauling its stage to JMU, but nobody should mind this one bit. First of all, JMU gets GameDay on its campus, an exhausting, exhilarating morning which every student at a football school should get to experience at least once. Second, if this season has taught you anything, it should be that the moment you begin to turn your head on a game is exactly when weird shit’s going to start to happen just out of your field of vision.

Week 8 also has brought an early gift in the form of a Tuesday contest: Arkansas State bested Louisiana, 37-27, in a matchup that featured a 21-point second quarter from the Red Wolves off two Fredi Knighten touchdown passes and a 30-yard interception return by Cody Brown. This segment is definitely not sponsored by Sonic and its annual Ragin’ Cajuns–themed burger, because while the effort and affection is laudable, the edible logo on the bun feels possible to consume but unnatural to attempt.2 (All times Eastern.)

Top 25 Matchups: Just one, but it’s a good’n, no. 15 Texas A&M at no. 24 Ole Miss (7 p.m., ESPN). This is one of those realigned SEC rivalries that feels like it has been played annually since time immemorial. With LSU still undefeated and Alabama at 3-1 in league play, the loser of this contest will break up a bit of a logjam and tumble down the SEC standings to join the likes of Mississippi State, Auburn, and Arkansas.

How High Are the Week 8 Stakes? High as a stray balloon. Could be anywhere. Maybe bobbing just above your head. Maybe way out in the atmosphere somewhere. Maybe adopted by a French moppet.

Because the thing about having no other ranked teams playing each other this week is that Saturday is going to go one of two ways: Either we’ll all have a nice sleepy day sacked out in front of this slate, or an unranked squad’s gonna pull a Top 25 program down off a ledge.

Undercards of Interest: While you’re waiting for Aggies-Rebels to get under way, conference contests of note in the earlier flights include no. 6 Clemson at Miami (noon, ABC) and Texas Tech at no. 17 Oklahoma (3:30 p.m., ABC/ESPN2).

Rivalry Game of the Week: It sure as shit ain’t Tennessee at no. 8 Alabama (3:30 p.m., CBS), I can tell you that much, not until they put the stupid thing in the right place on the calendar. If you’re going to insist on saddling a series with an unwieldy title like Third Saturday in October, just put it there. This is soooo much less complicated than changing a conference name in realignment and getting the 10-team league called something other than the Big 12. Where my strict constructionists at??

Anyway. Thank Football Jesus for Indiana at no. 7 Michigan State and the Old Brass Spittoon (3:30 p.m., ABC/ESPN2). Yes, for those of you scoring at home, that is the second spittoon traveling trophy featured this season in this space, and yes, this is the greatest sport on earth.

Grudge Match of the Week: Former stomping grounds fight! James Franklin’s current Nittany Lions and former Terrapins3 meet in Baltimore (Penn State vs. Maryland, 3:30 p.m., ESPN) in a game that last year featured the most bitter Big Ten burn imaginable, a skipped handshake. And in the SEC, Gus Malzahn’s actual Auburn Tigers meet the Arkansas Razorbacks, for whom Malzahn spent time as an assistant in the world we currently inhabit and also as a head coach in this made-up universe (noon, SECN).

This Week in Why? The viewer-disserving scourge of upper-versus-lower division games isn’t going away, but there has to be a line somewhere. 5-2 BYU is hosting Wagner, which is currently winless at FCS football. Where’s the neighborliness?

How many undefeated teams play this weekend? Twelve, none of which are playing each other or even another ranked team.

How many winless teams play this weekend? Four, three of which are probably not going to drop that zero on Saturday: UCF hosting no. 21 Houston, North Texas visiting 6-1 Marshall, and Kansas dropping in on no. 14 Oklahoma State. Your best bet to see a first win is 1-5 Troy at 0-6 New Mexico State (8 p.m., ESPN3). 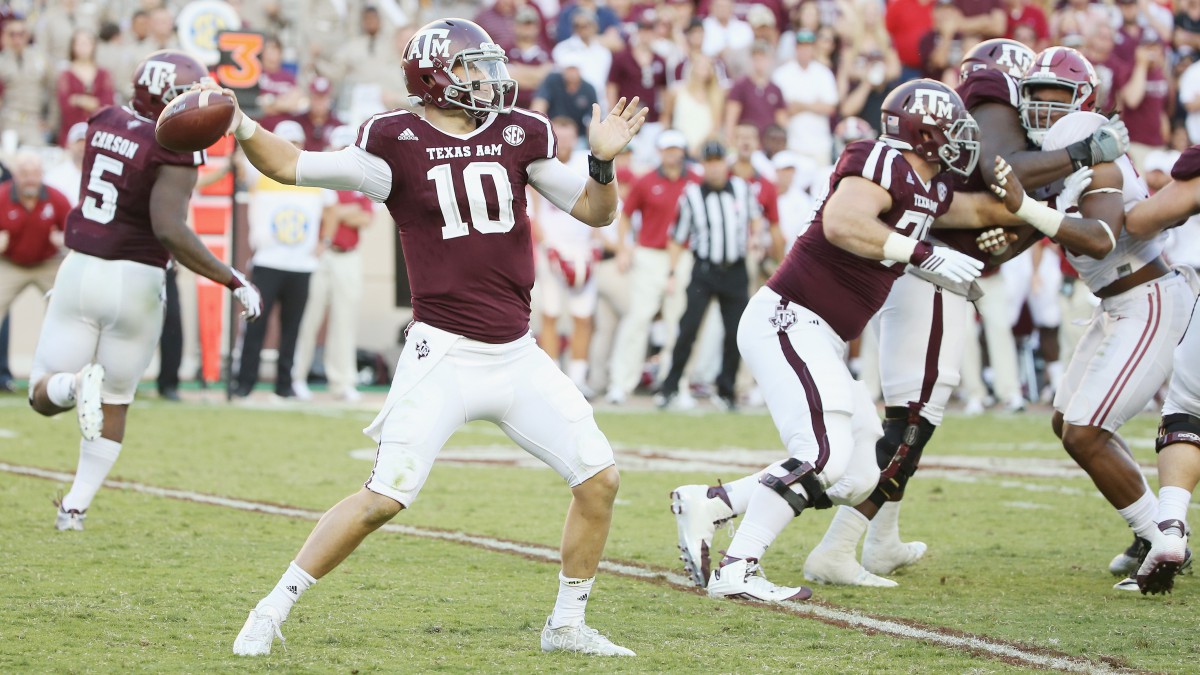 Thursday: It’s a good time to look in on no. 22 Temple as it visits East Carolina (7 p.m., ESPN2), but don’t sleep on Georgia Southern at Appalachian State (7:30 p.m., ESPNU); the Eagles and Mountaineers have 10 wins between them already. More #Pac12AfterDark action lurks late with no. 20 Cal at UCLA (9 p.m., ESPN).

Friday: Does reading “no. 18 Memphis” feel as fun as typing “no. 18 Memphis”? This will serve as your reminder that no. 18 Memphis plays at Tulsa (8 p.m., ESPN), and that Three 6 Mafia won an Oscar before Scorsese. In contests unrelated to Academy Award–winning rappers, Utah State visits San Diego State (10:30 p.m., ESPN2).

Saturday: Week 8’s marked lack of headliners affords an excellent opportunity for you to check out some off-the-trail action while waiting for your teams to kick. Try Kansas State at Texas to start (noon, FS1), Washington State at Arizona in the afternoon flight (4 p.m., P12N), and Western Kentucky at no. 5 LSU in prime time (7 p.m., ESPNU) for maximum eccentricity potential. It could be a game-winning safety from Bill Snyder’s boys. It could be Les Miles removing his signature hat to reveal a smaller Les Miles standing atop his head who has been calling the plays this whole time. You never know. You just never know.

Are you Stephenville–era Art Briles? Do you feel like a winner? Go on, now. Get out there.

This column has been updated to correct a photo caption; the Texas A&M quarterback pictured is Kyle Allen, not Kyler Murray.