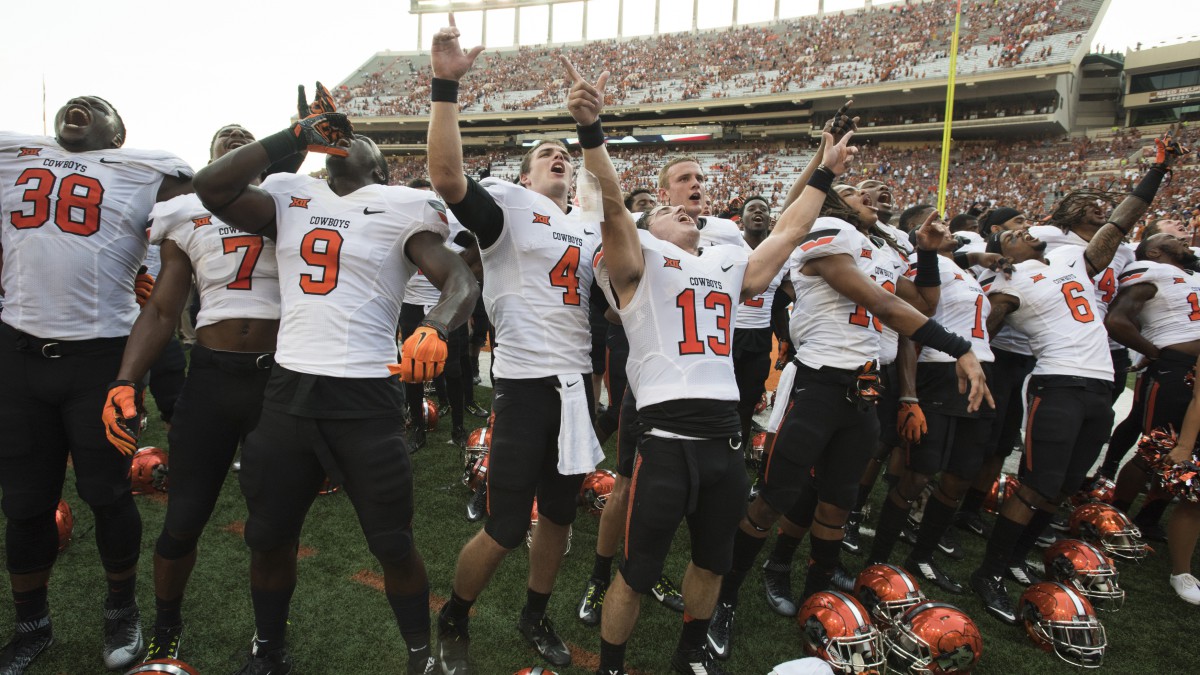 Ask just about any college football coach and he’ll tell you: If his players have to be making mistakes, he wants them out there making them at full speed. Nothing ventured, nothing gained; timidity ain’t played nobody and scared football ain’t never won no titles. There’s something to be said for not letting the worst of outcomes undo the best of intentions. You want these guys to come away with something, because they sure didn’t get what they wanted on the field.

The Grape Job isn’t awarded to just any old workaday fuck-up. It’s not here to highlight bad officiating calls. It’s not here to point fingers at the Florida Gator tackling his teammate, because — not always, but this time — that turned out to be the correct move. No, what you want to look for here is the on-field equivalent of this guy:

"When you think ball is life" pic.twitter.com/u8BgURWcZo

Get the picture? These teams tried. It did not work. Let these JPEGs of scratch-and-sniff stickers serve as recompense. In no particular order, because all are deserving of affection, as one would dote upon a three-legged cat:

1. South Carolina. You know that feeling when you’re the best player on a team that’s having a rough year, and, in the course of trying to avoid letting a division rival and traditional doormat string together two wins against your side for the first time since the late ’90s, the ball hits the ground on what would be the tying two-point conversion attempt? Pharoh Cooper does:

2. Idaho State. Rugby punts are not for the faint of heart, but there’s a low kick, and then there’s a low kick that actually hits an opposing player in the numbers, and he still manages to fall on it even caught off guard:

3. Rutgers. Hopefully guaranteed to be the most enthusiastic offside lineup you’ll see all season, but you never know:

Rutgers was… a little offside. pic.twitter.com/e6iznsJmpx

Bonus pathos: On this same play Kansas was flagged for illegal formation and at one point an official was signaling the ensuing play looked like a touchdown. It’s a gridiron turducken.

4. Army. The Black Knights would go on to lose to Fordham, but you maybe could guess that by looking at this one sequence of events:

Just your normal Army drive ending in a 35-yard loss for a safety pic.twitter.com/f3mJuHIvjj

The Rams’ final margin of victory, by the way? Two points.

5. North Carolina. Do what you love, they say, and you’ll never work a day in your life. For the Tar Heels, that passion is crafting matched interceptions with astonishing precision for a season opener.

6. Washington State. Want to live out the feeling of Grape Job in the comfort of your own home?

I bought a Chromecast this morning to stream Pac-12 Networks. For a loss to Portland State https://t.co/Ctipgy5il6

Follow the path of noted Cougars enthusiast Brian Floyd and make special viewing arrangements that end in your alma mater dropping a game to an FCS team.

7. Texas Tech. This is not a joke: The Red Raiders feel like they could really turn a corner before too long. This is a joke: They will want to make sure the football turns the corner at the same time.

8. Kansas. The Jayhawks are having a little bit of a year. (Really, it’s a rough year for Kansas-based footballing in general.) Winless after four games, they’re heading into the Baylor buzz saw this Saturday.

But it’s hard to imagine any kind of heartbreak that could surpass fumbling a spike while trying to get a field goal unit out, and in the process losing to South Dakota State.

10. Texas. The Longhorns have seen more than their share of soul-rending misfortune already in 2015. None was more devastating than playing a ranked Oklahoma State team close, only to fumble a punt snap to tee up a game-winning field goal for the Cowboys:

10. Penn State. The Nittany Lions have been striding into new frontiers of sacks-allowed tomfoolery for a minute now. You might recall Ohio State’s Joey Bosa bringing Christian Hackenberg to the turf last season using Hackenberg’s own teammate as a bludgeoning tool. This season, they really stretched the bounds of possibility in Week 1, allowing Temple to bring down Hackenberg using just two rushers:

In a fate-tempting follow-up, Penn State buried tape of the eventual loss to the Owls on its own practice field, which you’d think would create some kind of haunting effect — but the Nittany Lions haven’t lost since.

The USMNT Should Beat Mexico, But What Will Jurgen Klinsmann Say If It Doesn't?