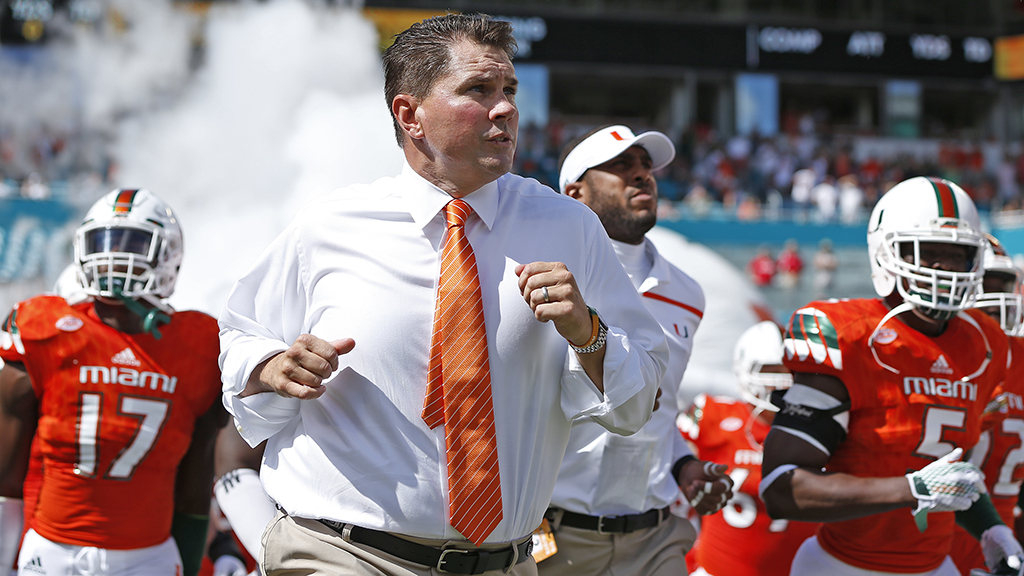 Al Golden was doomed from the start. While the embattled, perpetually perspiring Miami coach may not have been fired until Sunday, a day after The U’s humiliating 58-0 loss to Clemson, it was clear he wasn’t the right man to lead the Hurricanes as soon as he delivered his introductory press conference on December 13, 2010.

Specifically, Golden’s ignominious fate was sealed when he declared his team would enjoy “great success academically” and “represent the university with class, first class.” Likewise, his pledge to develop “disciplined” players was an incredibly inauspicious sign. We’ve all seen The U, and preaching discipline is not how you go about building a dynasty at Miami. Does Howard Schnellenberger’s legacy mean nothing anymore?

Fortunately for Miami AD Blake James, I’m here to help him find Golden’s replacement. No need to hire any high-priced search firms — simply prioritize the traits listed below, which combine to form the ultimate Hurricanes coach. I’m Dr. Frankenstein, and this is my monster.

When Kiffin took over at Tennessee in 2008, he knew the program desperately needed a jolt of energy. Phillip Fulmer may have won a national championship, but the Volunteers had turned stale under his watch — especially compared to resurgent SEC rivals like Florida and Alabama. To remedy this, Kiffin approached the Tennessee job with unrepentant brashness, apparently because he thought it impressed recruits. “We need them seeing our logo, we need them hearing about Tennessee,” Kiffin said in early 2009, attempting to justify having accused Urban Meyer of an NCAA violation he did not commit.

Shockingly enough, this strategy actually seemed to work: Under Kiffin, Tennessee finished 10th in Rivals.com’s recruiting rankings a year after placing 35th, and brought in acclaimed running back Bryce Brown, the no. 1 prospect in the nation. Lil Wayne even referenced Kiffin’s audacious style in the song “Banned From TV,” undoubtedly giving the once-moribund Vols some much-needed street cred. Suffice it to say Fulmer has never received a shout-out from Weezy.

Golden’s replacement should display a similar level of swagger. And if there is a God, said replacement will end up being Kiffin himself.

If you don’t have a major scandal on your résumé, you should be ineligible to coach at Miami. Sorry, Lincoln Chafee: Looks like you’ll have to find employment elsewhere. Rules are rules!

Petrino’s April 2012 motorcycle incident had everything you want in a college coaching scandal: sex, lies, blood, misuse of public funds, and a bizarre press conference featuring a Halloween-costume-worthy neck brace. Here’s hoping it inspires Miami’s next coach to engage in some creative impropriety, because that’s what it takes to succeed at The U.

This is what Golden never understood about Miami. Tellingly, he considered notorious booster Nevin Shapiro a “scumbag,” rather than a likely reason the Hurricanes were able to attract so much blue-chip talent in the early 2000s. Golden’s successor must recognize and appreciate Shapiro’s importance to Miami football, and perhaps even advocate for Sun Life Stadium to be renamed the Nevin Bowl. IF YOU BUILD IT, HE WILL COME.

Let’s face reality: You take your talents to South Beach because you want to party. All other reasons for moving to Miami are secondary. Therefore, a qualified Miami coach must be able to dance. And my man Dabo just might be the best dancer in the world.

Golden’s successor should register a Vine account and commit to posting multiple Whip/Nae Nae videos per day. You know that’s what Schnelly would do.

It’s going to take some time to restock Miami’s roster with future NFL stars at every position, so in the meantime, the team will need schematic superiority. Sometimes it is about the X’s and O’s, not the Jimmys and Joes.

While I’d love to see Kelly attempt to rebuild Miami, I don’t think he’ll leave the Eagles after just three seasons. And even if he were to rejoin the college ranks in 2016, he’d probably go to USC or Texas (if Charlie Strong gets canned), which are far more attractive gigs than Miami. Houston coach Tom Herman would be a realistic choice, though.

If Davis is truly interested in returning to South Beach — where he led the Hurricanes to a 51-20 record from 1995 to 2000 — James may not be able to turn him down. Based on Davis’s tenure at North Carolina, we know he possesses the requisite flair for scandal, and his ties to The U’s glory days would immediately energize a downtrodden, increasingly apathetic fan base, as well as pay instant dividends on the recruiting trail. Given the stark reality of the situation, Miami’s best-case scenario might be to let Davis turn around the program for four or five years, while simultaneously grooming a long-term successor.

I know South Beach is a hotbed for unsavory characters, but hiring Schiano — who is apparently a leading candidate to replace Golden — would make The U, Part 3 a veritable horror film. If Golden and Randy Shannon taught us anything, it’s that Miami is no place for a disciplinarian.