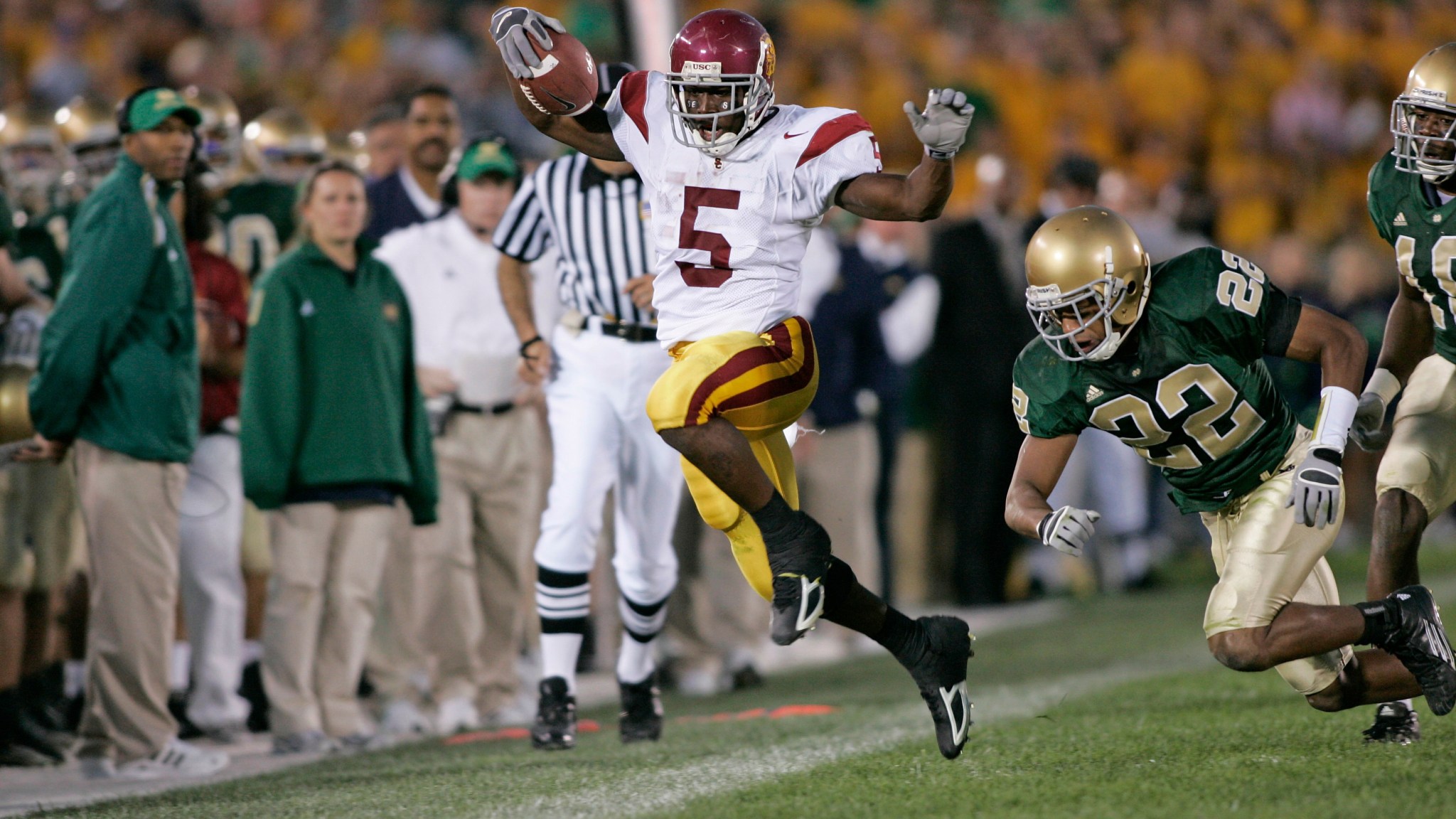 A decade ago, it was futile to ask any human being to stop Reggie Bush. Charlie Weis knew this. The first-year Notre Dame coach had led the unheralded 2005 Fighting Irish to a surprising 4-1 start, including wins over three ranked opponents. But with a showdown against no. 1 USC looming in Week 7, his charges were about to face a Herculean task. Bush was in the midst of a showstopping campaign that would eventually earn him the Heisman,1 and his supporting cast included reigning Heisman winner Matt Leinart and bulldozing halfback LenDale White. Moreover, the Trojans boasted a 27-game winning streak and were already regarded as a modern dynasty. No mere mortal could slow them down.

Something else could, though: grass. More specifically, tall grass. The logic was airtight: Notre Dame’s defense probably couldn’t keep up with USC’s high-powered offense, so why not try to neutralize the Trojans’ speed with thick vegetation? As the old saying goes, desperate times call for desperate lawn-mowing measures.

Yesterday marked the 10-year anniversary of the Bush Push game, and fittingly enough, USC will take on Notre Dame tomorrow in South Bend, providing us with a perfect opportunity to look back on Weis’s grass gambit. Notably, there was a precedent for this sort of gamesmanship in South Bend. In 1976, Notre Dame allegedly let the grass grow in an attempt to impede Pittsburgh running back Tony Dorsett, who had gashed the Irish defense in years past. “You could drop a golf ball in the grass and couldn’t see it,” recalled Dorsett in 2008. “The field was wet, and it hadn’t rained.”

Nevertheless, the “Dorsett cut,” as former Notre Dame coach Ara Parseghian termed it during the game’s TV broadcast, proved fruitless. Dorsett finished with 181 yards and a touchdown, and he led the Panthers to a 31-10 victory. He would go on to win the Heisman at season’s end.

The ineffective gambit seemingly resonated with at least one Irish fan, though: Weis, then an undergrad at Notre Dame, who filed it away for future use. This is admittedly speculation, but come on: Weis famously chases decided advantages, schematic or otherwise. You don’t have to be Alex Jones to think he would have gleefully resorted to extreme fertilization in the right situation.

The 2005 game against USC was the perfect time for Weis to make Notre Dame Stadium his personal Chia Pet. A win would legitimize the Irish’s hot start and set them up nicely for a BCS title game bid. In addition, Weis would immediately become a Notre Dame legend, and junior quarterback Brady Quinn would likely zoom to the front of the Heisman race. A loss, on the other hand, would elicit cries of “overrated” and all but eliminate the Irish from the national championship race. So a decision was reportedly made to grow the grass to a whopping five inches, transforming the field in Notre Dame Stadium into the rough at St. Andrews.

According to Steven Travers’s book Pigskin Warriors, “Weis instructed the groundskeeper to grow the grass as high as the Indiana wheat fields at harvest time.” While the BBC claims that Notre Dame “continues to deny that it doctored the field,” a university-sponsored publication conceded that the grass was “purposefully uncut … to negate the speed of the Trojans.” In a January 2005 press conference, Weis even quipped that, in order to thwart fast-paced offenses, “the grass needs to be longer.” Lamentably, Weis declined through a representative to be interviewed for this story, but it’s not hard to imagine him ordering a lowly groundskeeper to douse the field in Miracle-Gro. HEY YOU, THIS SHIT LOOKS LIKE A PUTTING GREEN. GIVE ME A GODDAMN WHEAT FIELD.

USC kick returner Desmond Reed even attributed the torn ACL he suffered during the game to the tall grass. “I really don’t think I would have got hurt if the grass wasn’t long,” he told the Los Angeles Times in 2006. Steve Sarkisian, then an assistant with the Trojans, was similarly struck by the grass’s Yao Ming–esque height: “You knew it was long, and you knew it was long intentionally,” he said after the game. “It wasn’t like the guy forgot to mow the lawn that day.”

So, was the Bush cut more successful than the Dorsett cut? It’s hard to say. Though Notre Dame lost 34-31 in a last-second thriller and gave up 160 yards and three touchdowns to Bush, it’s impossible to know how the game would have played out on a normally mowed field. Maybe USC would have scored 60 points and Bush would have gained 200 yards. Maybe Leinart would have been able to reach the end zone for the go-ahead score without the controversial Bush Push. At the very least, the turf trial made for a juicy subplot to an all-time great game.

Less than a week after the loss, Notre Dame inked Weis to a massive (and retrospectively hilarious) contract extension. And although Weis was relieved of his duties in 2009, he’s still receiving laughably exorbitant sums of money from the university. Perhaps he has a groundskeeper to thank.

Current Trojans running back Tre Madden probably isn’t good enough to necessitate turf manipulation on Saturday, but even if he were, it wouldn’t be an option: Notre Dame installed FieldTurf in 2014, effectively removing the Dorsett cut from Brian Kelly’s arsenal. It will not be missed.