We Went There: Towns and Russell Debut, But Kobe Takes the Spotlight 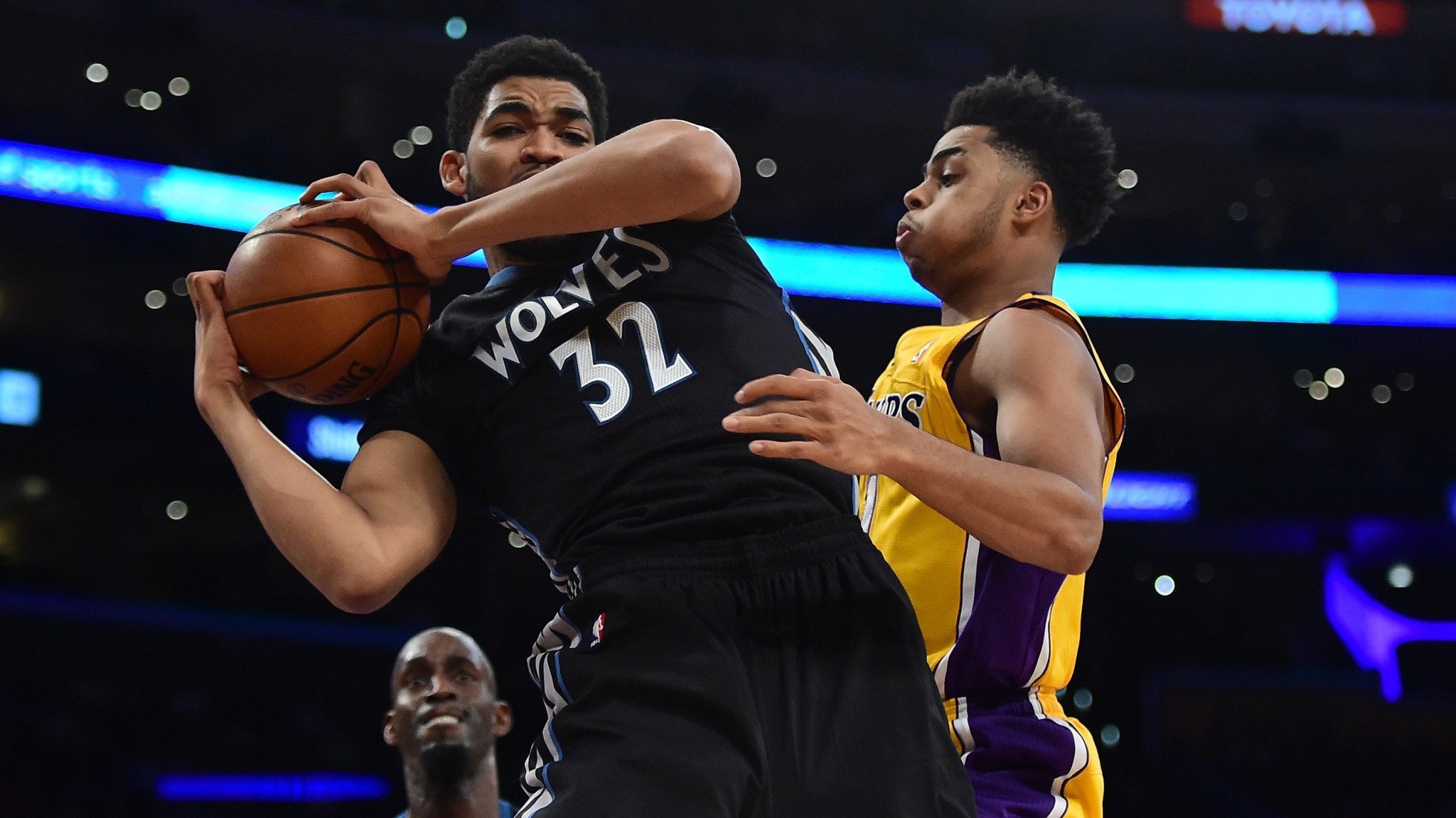 With just over four seconds left in a one-point game and his new power forward thundering down the court with the ball, Kobe Bryant called a timeout. Such is his prerogative as one of the greatest players in basketball history. Said power forward was playing in only his second regular-season NBA game ever. This was no. 1,281 for Mr. Bryant, so you could excuse him his rather late decision to halt the contest after his team gained possession at a critical juncture. A good four to five seconds passed before the 20-year veteran slammed his metaphorical Gandalf staff down at midcourt and said “you shall not pass” to the youngsters eager to take his place. He’s allowed to do as he pleases. It’s just that, well, last evening was not supposed to be about Kobe.

“Lord, just let me get through this night,” a Staples Center worker said to no one in particular as we rode the elevator from the caverns of the arena to the bustling concourse. Working in a complex entertainment organism like Staples is never easy, and that’s especially true at the start of a new NBA season. On a night when the top two picks from the 2015 draft were debuting in the same game, everyone — the arena staff, the weary media flacks, the perspiring fans, and the superstars-in-waiting named Karl-Anthony Towns and D’Angelo Russell — was hoping to just get through the nervous energy of opening night.

It was in the Lakers’ opener against Houston at Staples last year that their first-round pick and aforementioned power forward, Julius Randle, lost his entire inaugural season to a broken leg. And when you’re a floundering franchise trying to dig yourself out of the shallow grave of the NBA shit list, every hard foul, every errant elbow, is a cause for concern. Karl Towns, the beaming papa of the no. 1 overall draft pick, put it to me simply and succinctly before the game: “I can’t eat right now.”

The nebulous, unknowable concept of “what’s next” plagues both of these teams, but in diametrically opposed ways. Despite their intertwined founding histories, the Lakers and Timberwolves are about as far apart as two NBA franchises can be without playing in completely different sports. As L.A. public address announcer Lawrence Tanter finished his customary not-so-humblebrag listing of every trophy, banner, and accolade the team has amassed, I thought about how the luxury of such routine self-satisfaction isn’t possible in Minnesota.

A sole division title in 2004 is all the Wolves have to show for 26 frustrating years in the league. Their greatest player had to fly off to Boston to win a ring and has only now chosen to return in the twilight of his playing days. With eight top-10 picks over the past 10 years, this is a team on its third savior this decade. Somehow, the Timberwolves are trying to muddle through after the tragic death of beloved head coach Flip Saunders — their North Star and the architect of this tentative rebuild.1 The Lakers want to reclaim the good fortune they consider their birthright, and the Wolves just want to play one real, meaningful basketball game in the near future.

Those differences manifest themselves in their newest additions. Karl-Anthony Towns is the prototypical big man of 2015’s pace-and-space league. Last night, he was equally comfortable on the block as he was drifting into space. His game is not flashy, it’s not highlight-reel material, but it certainly looks like it belongs in the NBA. Russell, on the other hand, was born to be a Laker. His laser no-look passes, supreme confidence, and brand-friendly nickname (D-Loading) are vintage Showtime, but whether that hype will translate into a memorable career seems far less certain than it is with Towns.

Somewhere within last night’s sloppy, maniacal game, which included 22 turnovers and only two lead changes, we were supposed to find glimpses of the future.

Lakers fans, not used to the level of suffering from the past few seasons, are holding out for some moment of truth that may never come — a rapturous day in which Kobe Bryant agrees to relinquish control of a basketball team he’s led to five championships and seven Finals appearances in 19, going on 20, seasons. As much as I and other Lakers fans adore Kobe for his myriad accomplishments, he’s come to represent something akin to a benevolent dictator who’s outlived his ability to govern effectively. No. 24 is sort of like Fidel Castro if he had a fadeaway jumper in his arsenal. We may not be able to fully rid ourselves of Bryant until he’s so feeble that he couldn’t even post up a chair.

Last night, there were opportunities for Kobe to move the rites of succession forward a bit. Going to a Lakers game these days is not unlike a papal conclave — you keep waiting for the white smoke that signifies this interminable transfer of power is over. Unexpectedly, Kobe was given a microphone before the start of the game in order to rally the troops once more. He talked about how Lakers fans have given the team their “unwavering support” through the tumultuous rebuilding process that’s featured three coaches, Dwight Howard’s arrival and subsequent departure, three season-ending injuries for Bryant, and the disastrous Steve Nash sign-and-trade that will likely see the Lakers forfeit their first-round pick at the end of the season. He paid lip service to the next generation without being too specific, so as not to prematurely name his inheritor. The fan support he spoke of is undeniably strong, but it won’t last forever and was certainly tested as the Lakers melted down in the process of blowing a 16-point lead to a woeful Wolves team that looked generally confused about the game of basketball until the third quarter.

L.A. built that double-digit advantage on the back of irrational exuberance from Kobe and Nick Young. Chuckers gonna chuck, and the heat checks continued through the first half. The crowd lit up after every impossible 3-pointer, and they demanded these two keep testing the limits of their ability. You could see the hubris growing in Bryant after every make in the first quarter — the head nods that signified “Of course I’m making that absurd, contested shot at the end of the shot clock. I’m Kobe Bryant, dude” and the come-hither stares directed at his point guards as he commands the ball be placed in his hands yet again.

As such, throughout the first half of his debut contest, Russell was asked to play off the ball. That often meant standing alone in the corner like me on prom night, spotting up for a pass that would never come. Unguarded and unwanted, he languished in obscurity while the Black Mamba strangled the game into submission. Bryant scored 24 points on a grisly 8-of-24 from the field. Thirteen of those shots were from behind the 3-point line. The Lakers were minus-6 with Kobe on the court. Never mind that the future of the Lakers franchise was wide-open for most of the game: Bryant’s first assist came with about 30 seconds left in the contest. Ricky Rubio just plain did not guard Russell any time he wasn’t handling the ball. He could hoot and holler and wave his arms until they fell off, but the pass was not coming. The shots Russell did get were mostly contested looks and he got very few open lanes to the hoop. By the end of the Lakers’ defeat, D-Loading was 2-of-7 for four measly points, two assists, and zero trips to the free throw line. To be fair, the Lakers were minus-9 in the nearly 26 minutes Russell was on the court,2 but with only seven shots, he barely had a chance to grab any of those points back.

The Timberwolves player closest to Bryant’s cultural and athletic significance is Kevin Garnett, who led them all the way to the Western Conference finals in 2004 — a series they lost to Kobe and that ill-conceived Lakers team, the one that got throttled by the Pistons in the championship round. Garnett won a title elsewhere but will forever be Minnesota’s talisman. In his aged state, he defers to his younger teammates when it’s time for a bucket, but he’s a vocal, visible presence on the bench. His familiar celebratory scowl came out after every crucial play last night, particularly as the Wolves chipped away at a 16-point Lakers lead. His line was puny (2-of-4 for four points), but he was plus-12 and drew a technical foul late in the second quarter that turned the vibe of the game toward his team.

To paraphrase one of Garnett’s ex-teammates, this is why you pay him — to dictate the mood on the court and fiddle with the fragile minds of opposing players. This is a team that needs a guy like KG. The “education of the next generation,” as Sports Illustrated put it, will be dictated by the veterans on the Lakers and Timberwolves. Whether it’s an inherent personality trait or a learned behavior, Towns looks at home, or at least more so than Russell. He was a part of the offense rather than a weird third nipple doing everything he could in an attempt to be noticed. Towns’s mentor was highly visible. Russell’s only seemed to want to talk to Roy Hibbert, Metta World Peace, and the adoring throng of Angelenos that paid to see him indulge himself.

Enjoying the privilege of seeing a notable player’s debut game means getting to ferret away the answer to the trivia question, “What was Player X’s first basket of his career?” Towns’s first field goal came on a defensive rebounding miscue between Hibbert and Randle. They both went up for the ball, it squirted out from between them, and Towns pounced for an easy dunk.

Russell hit a midrange jumper coming off a Randle screen, the kind of play those two should be able to execute for years to come.

In neither case was it a highlight or a reason to stand up and cheer. Those moments were, of course, reserved for Bryant. After the late-game timeout, Kobe inbounded the ball. He never touched it again, as it went not to him or to Russell but to reigning Sixth Man of the Year Lou Williams. His layup clanked off the rim and the Timberwolves escaped with a surprising 112-111 victory. The Lakers faithful somberly filed out of the arena — no free tacos, no “I Love L.A.” to serenade them. Everyone made it through the evening, but the anxiety remains.