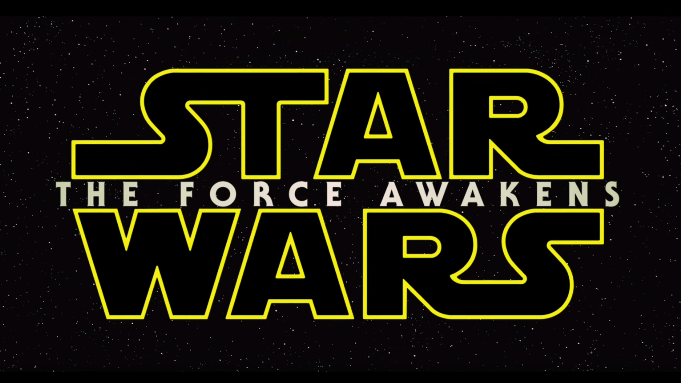 Last night, millions of people were forced to watch Monday Night Football for the first time in their lives thanks to the debut of the final trailer for Star Wars: The Force Awakens1 during halftime of the Eagles-Giants game. First off, let me apologize to all of you who think that’s what football is usually like. Believe me when I say that what you saw resembled football in only the most superficial ways (helmets, shoulder pads, a fat guy yelling into a headset).

After all that excitement, all that mind-numbing hype, and all that feverish anticipation, the movie is almost here. At last, we can all relax and enjoy this monumental cultural experience together. I hit refresh on Fandango enough times that I finally got my tickets; now remind me when this thing’s coming out.

Two more months of this shit. By Christmas, I will have chewed my own hand off and will need a robo-hand like Luke Skywalker. I’ll want to have that sucker installed ASAP, because without one of those crane game claws attached to my body, I won’t be able to buy more Star Wars toys.

I’m so tense that I can’t even sign away my life savings to Lucasfilm’s licensing department because my arms won’t stop trembling. My only hope for survival in these next two months is to nibble at the tasty scraps of this latest trailer. Join me and together we shall rule the galaxy as blogger and son. 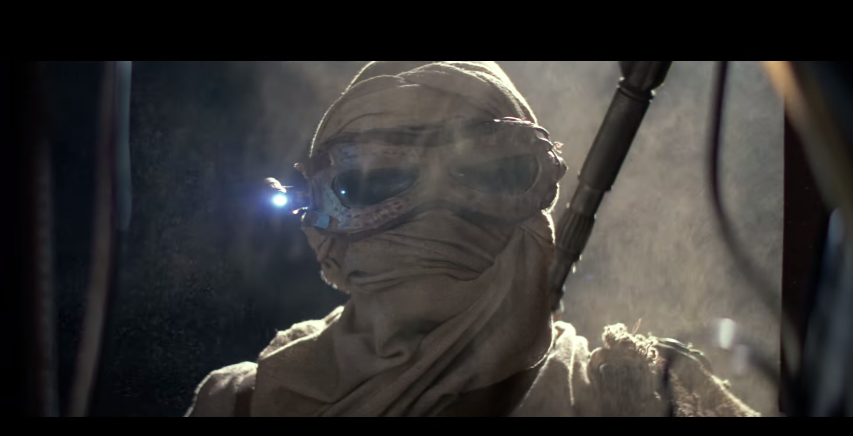 We open on Rey, the mysterious scavenger who claims to be “no one” — a description that sounds pretty familiar for fans of other massively popular fantasy sagas. Grantland Jedi Council member Ben Lindbergh told me via email: “Loved the revelation that Rey is actually Arya Stark wearing one of those faces from the House of Black and White basement.” Will a girl turn to the Dark Side? We’ll see. 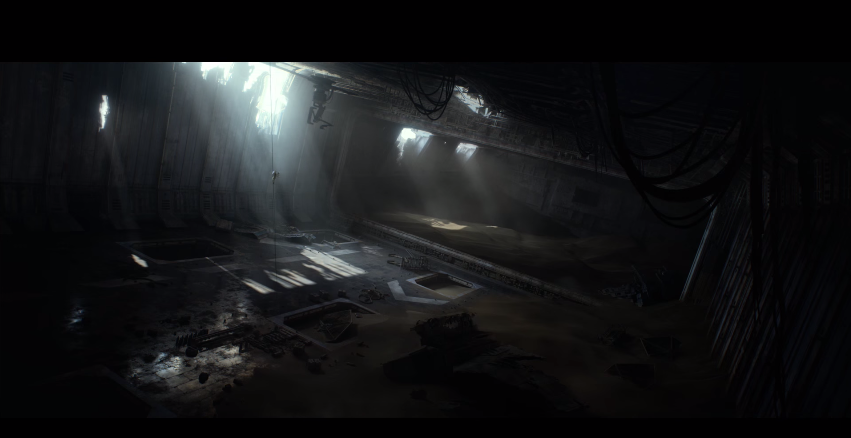 Rey swings down into what very much looks like the hangar deck of the crashed Star Destroyer on Jakku. I can’t help but wonder if she’s the first person to go exploring in this thing, considering it’s been hanging out in the middle of the desert for more than 30 years. Maybe she’s just the only one brave enough to try. 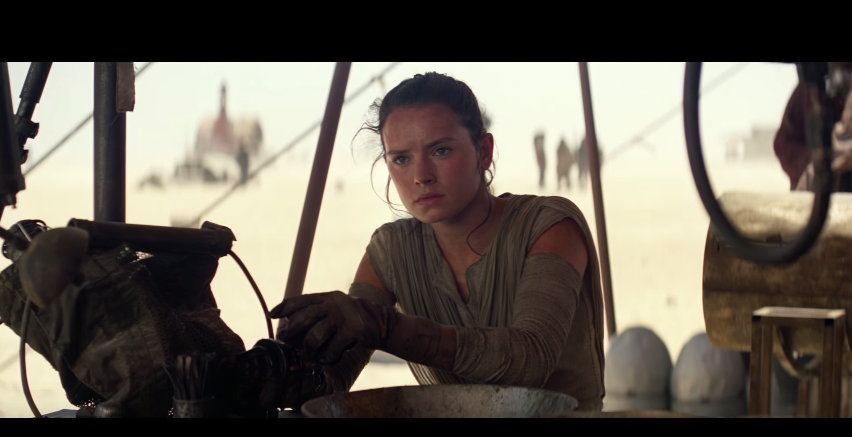 Here’s a fun little shot of Rey trying to clean the filter on her Dirt Devil. Hey, good luck maintaining a vacuum cleaner in a desert.

God, I am so pumped for this movie already. When does it come out again? 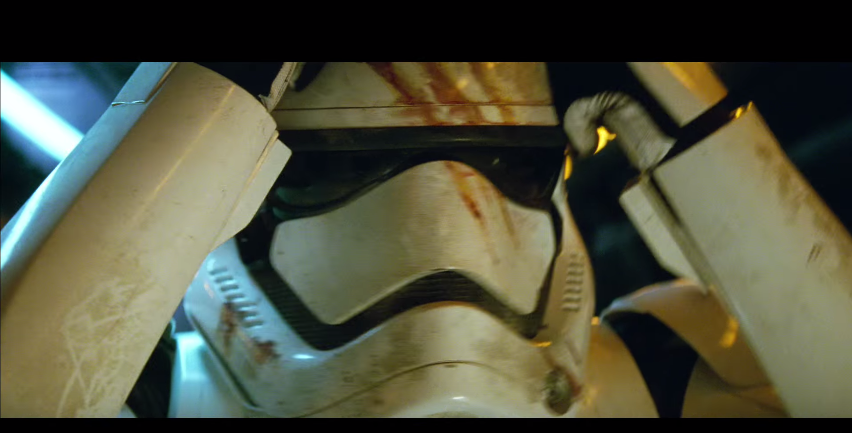 Anyway, Finn’s Stormtrooper helmet appears to have some blood on it. This is just a bit more confirmation that the First Order’s war crimes push our intrepid hero to his breaking point and cause him to defect to the Resistance. As evil as the Empire was supposed to be, we never really saw any actual atrocities in the Original Trilogy besides the destruction of Alderaan, unless you count the outfit on our old friend General Veers. 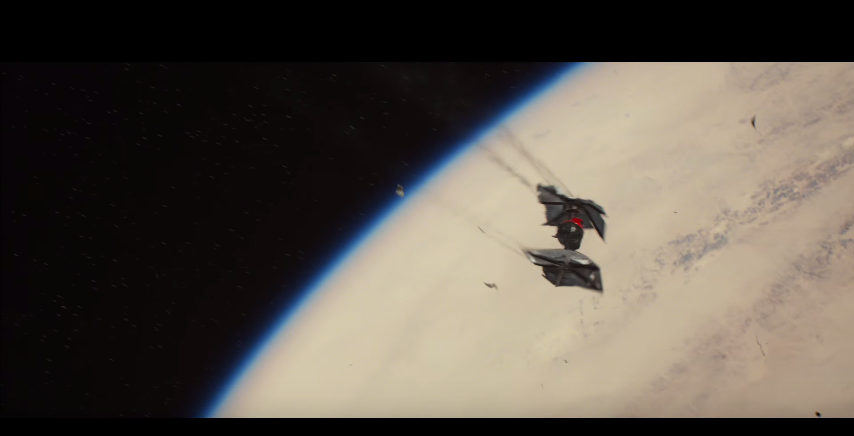 All signs point to this being a TIE fighter that Finn steals during his escape; it looks like it gets damaged and crash-lands on Jakku. When factoring in the dialogue from his toy and shots we’ve seen in previous promotional material, I think it’s fair to assume that Finn is rescuing Poe Dameron when he flees the First Order. 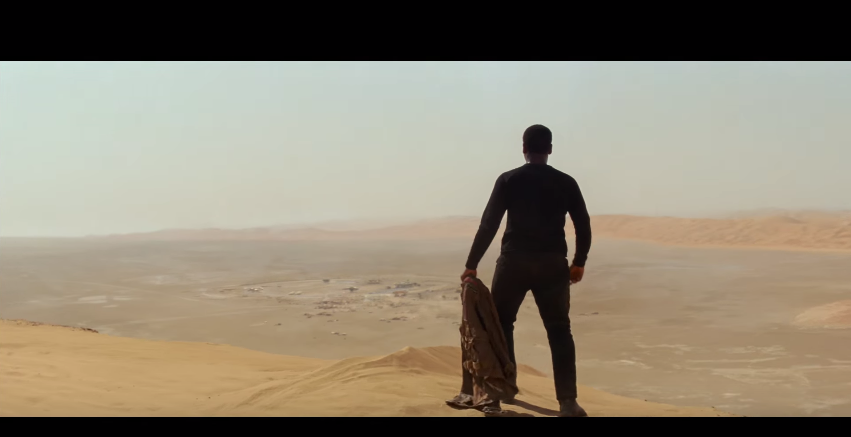 I wouldn’t bring a jacket to a desert planet, but Stormtroopers are trained to be prepared for any weather condition.

Wait, wait, wait. Is that … a LENS FLARE? J.J. Abrams is back, baby! Hopefully there’s a disclaimer at the start of this film warning people that it might cause temporary blindness. 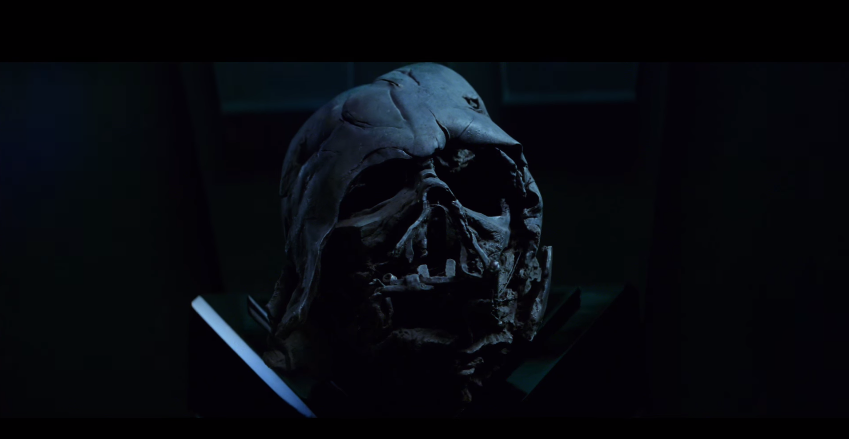 I guess Kylo Ren spends his down time talking to a burned-up helmet. That’s sort of like your best friend being an imaginary rabbit or a tennis ball. Kylo was probably one of those “indoor kids” who read a lot of comic books growing up. He probably didn’t kiss a girl until he was 25 and didn’t learn how to pilot a speeder until he was 30. You know, I’m starting to like him a lot more.

Hey, Oscar Isaac! How do you feel about having zero lines of dialogue in three trailers and generally being treated like an afterthought in the marketing for a movie we thought you were one of the coleads of?

Sorry, man. X-Men: Apocalypse will be cool, right? No, you don’t look like a California Raisin in that costume, I promise. 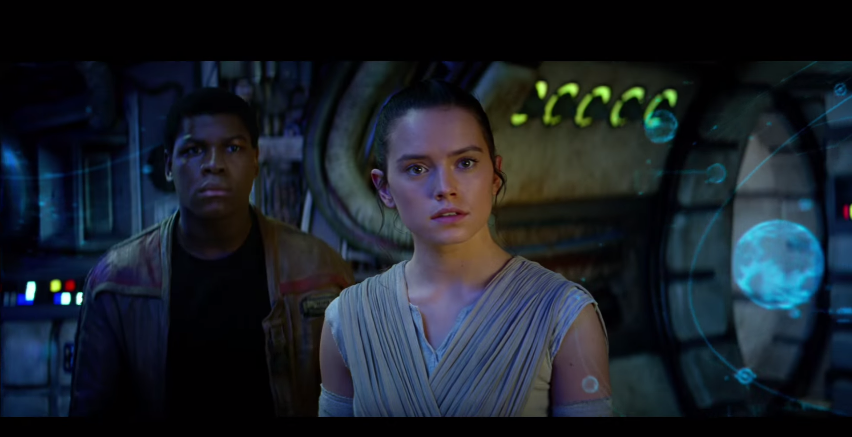 After seeing the Millennium Falcon chase on Jakku from the first teaser trailer again, we cut to the Falcon, where Rey and Finn have to sit through some boring-ass story from some old fart who thinks it’s OK to wear a stud in his ear well into his seventies. 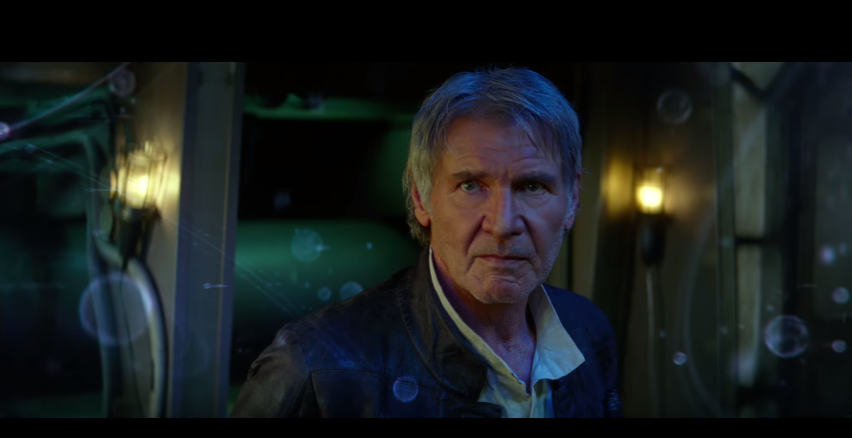 “It’s all true. The Dark Side, the Jedis, little teddy bears fighting robots with sticks, Billy Dee Williams, this guy, and a totally unnecessary, irritating musical interlude that will make you wonder why you spent so many years obsessed with this story. Really, it’s terrible. Someone should have said something before they added that part. It’s not good at all. Also, no matter what anyone else says, I shot first.” 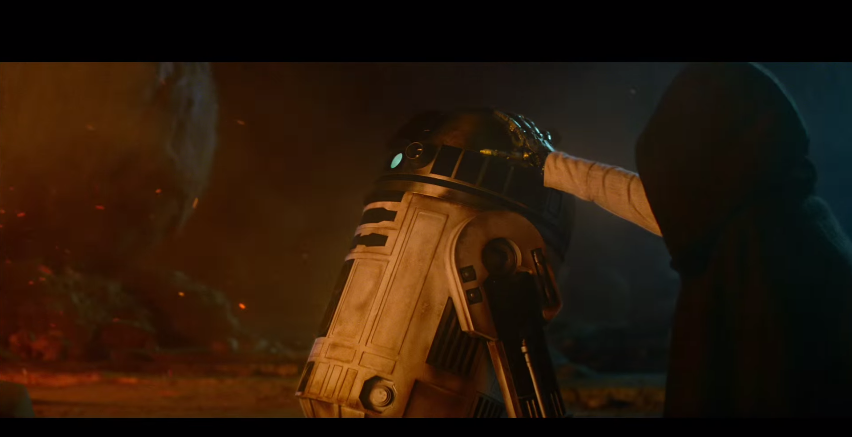 I want to address some confusion online regarding why the events of the Original Trilogy have become a legend that most characters think is total fiction after only 30 years. It is a bit odd until you realize that it was only 19 years between Revenge of the Sith and A New Hope and that Han Solo thought Jedis were made-up nonsense even though he was probably old enough to remember when Jedis still policed the galaxy. Let’s just accept that people in the Star Wars universe don’t have much in the way of education — especially moisture farmers, smugglers, gangsters, scavengers, and wayward Stormtroopers. I encourage all of them to pick up a book. 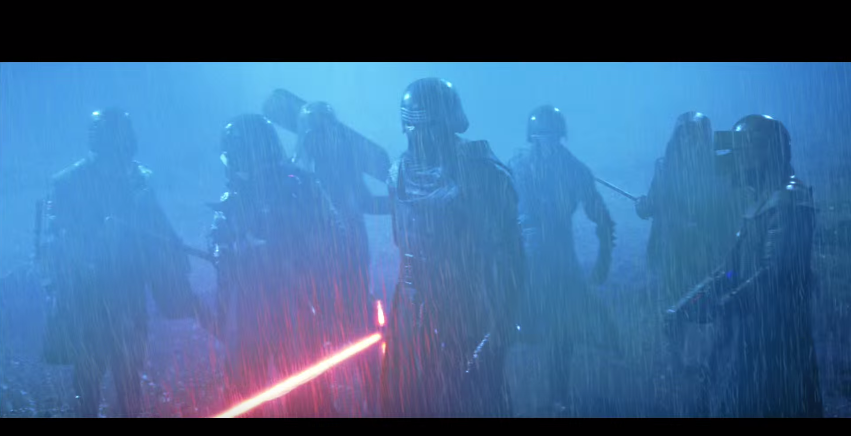 Here’s a new shot of Kylo Ren in the rain with some … Raintroopers? Seriously, is there a Stormtrooper varietal for every form of weather? Is there a Hailtrooper? Fogtrooper? Humiditytrooper? Maybe a Briskwindtrooper? 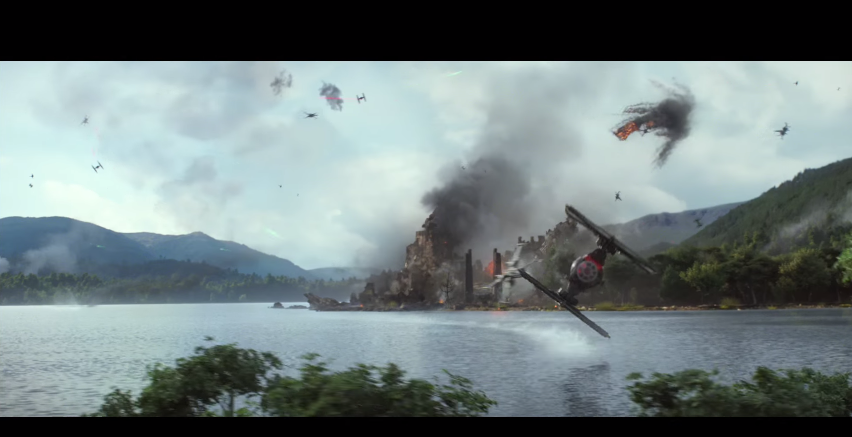 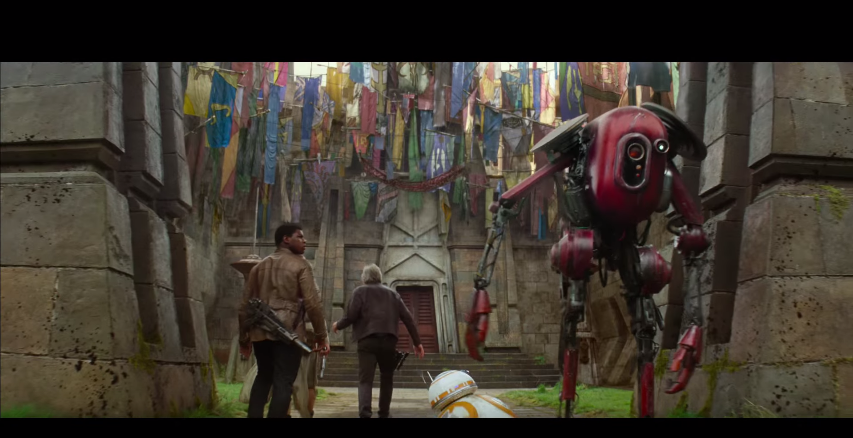 A temple guarded by the robot from the Lost in Space movie. If Matt LeBlanc is in that temple, I’m going to … nominate this film for Best Picture!

More likely, either Leia, Luke, or a Jedi artifact is behind that door. 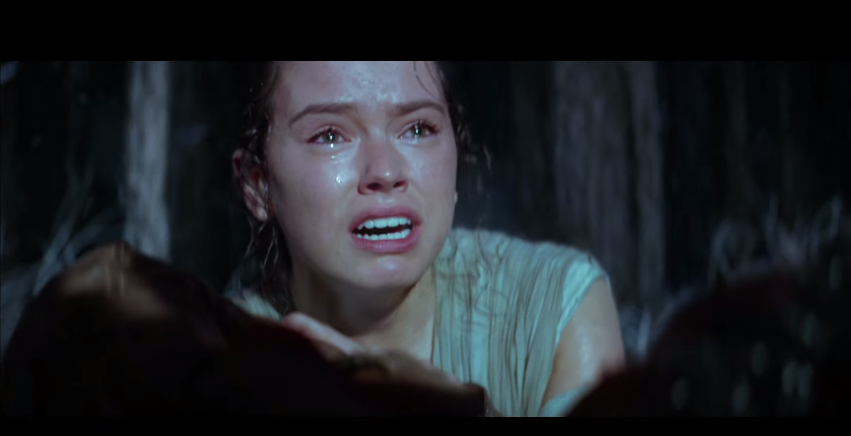 Someone or something makes Rey cry. Does she find out her dad is Dexter Jettster? Does anyone reading this even know who Dexter Jettster is? You might say she looks like she’s overcome with fear, which is the path to the Dark Side. 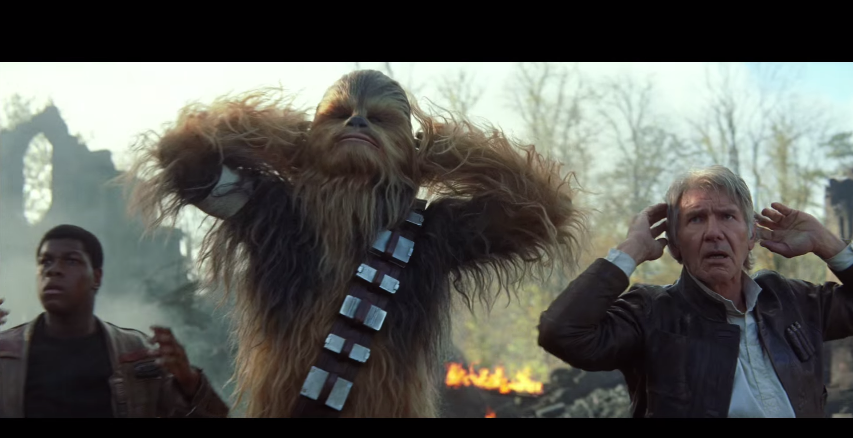 Han Solo keeps his “getting captured” streak alive. That’s four movies and counting, Han! You’re the Iron Man3 of being held against your will. 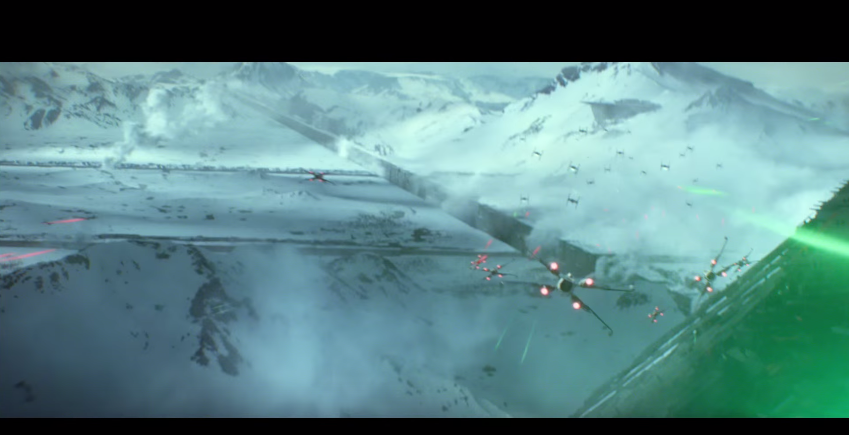 I’m staking my reputation on this being a snippet of the final act of the film. We now know that Starkiller Base, the First Order’s Death Star–esque superweapon, is an ice planet with a giant laser carved into the middle. Also, please notice the canyon splitting the above planet in two. Will we be seeing a climax similar to Luke’s Death Star trench run? Will we fall in love with an X-wing pilot as much as we crushed on Porkins? 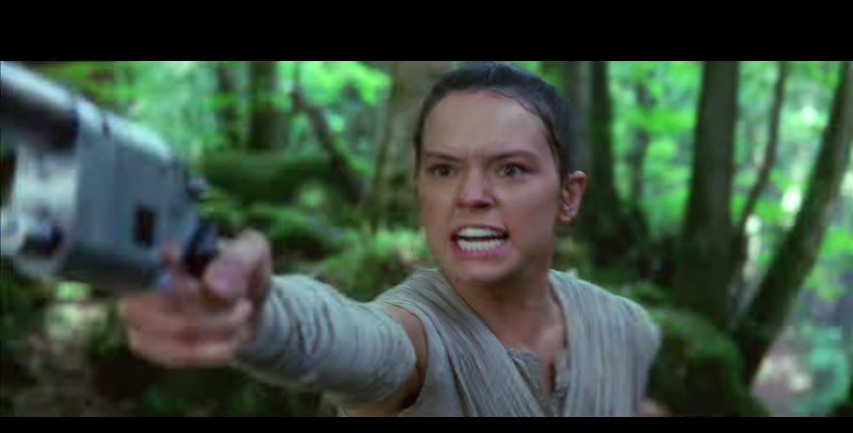 Rey looks pretty angry now. I guess it’s true that fear leads to anger. And anger leads to hate. Hate, as you know, leads to suffering. And suffering leads to a 30 Rock Netflix binge and a whole pizza, at least where I come from. 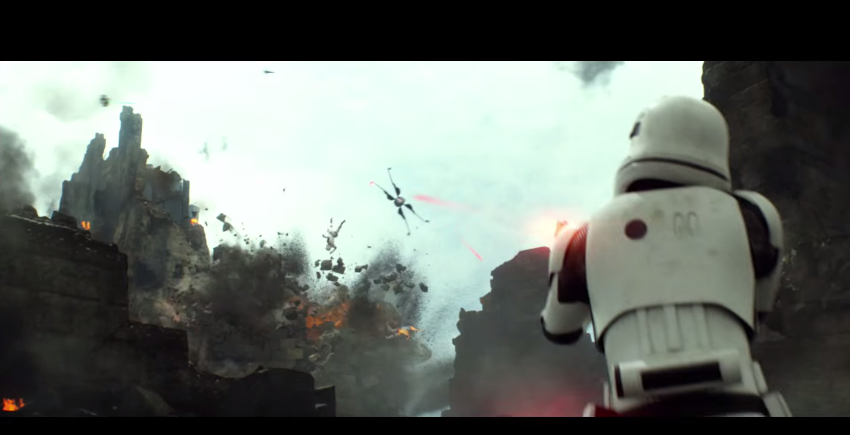 Star Wars finally figures out how to do believable ground combat scenes. The best the Original Trilogy could do was Hoth and Endor, but those were pretty small in scope due to the practical limitations of the era. The Prequel Trilogy, on the other hand, staged plenty of massive ground battles, and each and every one sucked in a unique way.

Episode I: The Battle of Naboo — the Gungan army vs. the Trade Federation battle droids

Cartoon rabbits against flying lawnmowers in the middle of an empty field. As lame as this looks, it’s easily one of the most impressive victories in Star Wars history, considering the Gungans are inept in every way.

Remember when the thing gets blown up by the other thing? How about that?

Episode III: The Battle of Kashyyyk — Droids vs. Clones vs. Wookies vs. Jedis vs. Good Taste vs. Art vs. My Attention Span

I don’t understand what’s going on.

Yeah … back to the trailer. 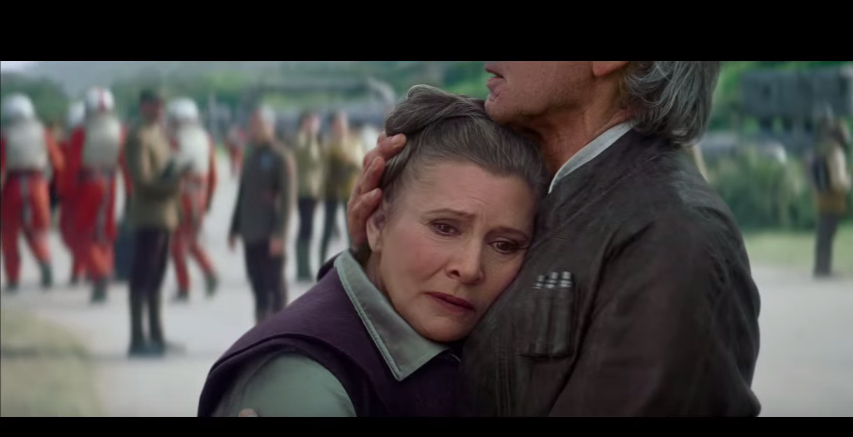 One, it’s great to see Carrie Fisher and Harrison Ford together again. Two, has anyone ever sorted out what those things are in Han’s jacket? Are they vape pens? Is Han Solo vaping? Was he at one point addicted to Death Sticks and had to start vaping to kick the habit? So many questions that only a 22-episode animated series on Disney XD can answer. 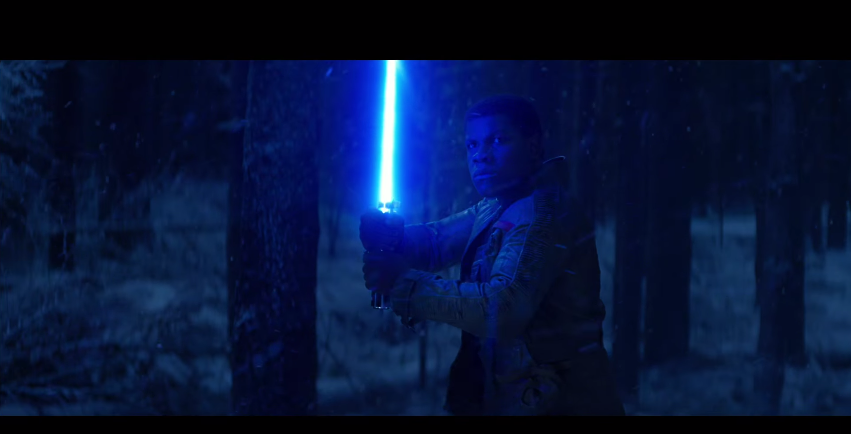 A lightsaber duel in the snow probably means this takes place on Starkiller Base at the end of the movie. The trailer sets up Rey to be the main hero, so why is Finn fighting Kylo Ren here? Could it be because she TURNS TO THE DARK SIDE? I’m not letting this crackpot theory go until the movie comes out. When is that again?

Oh, thanks for the reminder. It’s not even Halloween yet. 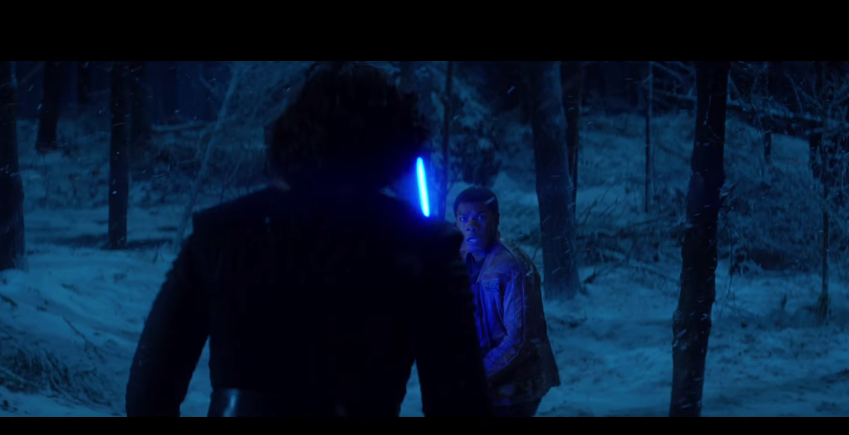 Speaking of crackpot theories, here’s one we can put to bed inside the warm innards of a tauntaun. Kylo Ren is NOT Luke Skywalker. That’s clearly the luscious mane of Adam Driver, sans mask. Sixty-one-year-old Luke becoming a Dark Side adherent with the voice of a 31-year-old makes about as much sense as Hayden Christensen sounding like James Earl Jones.

Well, I guess anything is possible in the Star Wars universe, which brings me to my final prediction:

The triumphant return of the Max Rebo Band!