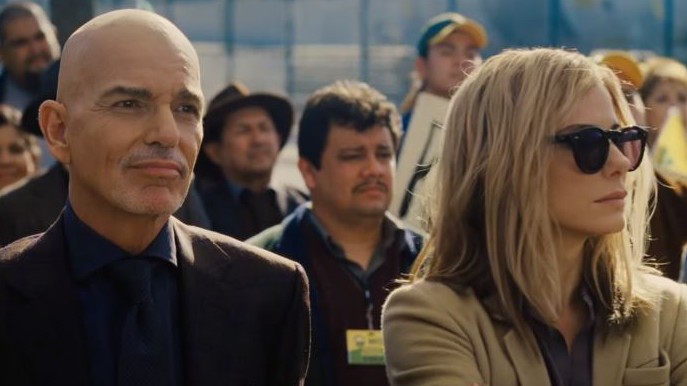 If you look at it as another sincere and affectionate cover-band take on a popcorn genre from director David Gordon Green, Our Brand Is Crisis almost makes sense. Pineapple Express was Green’s “’80s action comedy” movie, Your Highness was his “sword and sorcery” movie, and this one is his “Sandra Bullock” movie. It doesn’t find a new angle from which to approach a star who’s been eclipsed by a persona, the way Green did with Nicolas Cage in 2013’s Joe and Al Pacino in 2014’s Manglehorn. It just succumbs to Bullock’s gravitational pull, content to watch her play a medley of her greatest hits — funny, relatable klutz; recovering alcoholic; problem-solving tough broad; and (eventually) white savior — as a limp political satire unfolds around her. It’s the first time I’ve watched a David Gordon Green movie and found myself wishing I was in the capable hands of a set-’em-up-knock-’em-down director like Jay Roach.

The story is suggested by true events, and by a better movie about those events. In 2002, the Bolivian politician Gonzalo “Goni” Sánchez de Lozada, who’d served as president of Bolivia from 1993 to 1997, ran for the same office again, this time with the American political consulting firm Greenberg Carville Shrum in his corner. In writer-director Rachel Boynton’s terrific 2005 documentary, also called Our Brand Is Crisis, we watch as GCS uses crafty American-style politics to get Goni, initially a nonstarter as a candidate, elected with a narrow 22.46 percent plurality. He doesn’t really have the support of the Bolivian people, including the country’s deeply disenfranchised indigenous majority, and when he makes the unpopular decision to begin piping Bolivia’s natural-gas resources to Mexico and California through Chile, the population rises up in anger. Protesters clash with Bolivia’s police and armed forces, and by the time de Lozada resigns and flees to the United States in October 2003, at least 70 people have been killed, most of them civilians.

It’s a movie about smart people doing deeply cynical things in service of an ostensibly idealistic goal. As head pollster and strategist Jeremy Rosner explains early on, GCS is all about “progressive policy for profit,” which means swinging elections in favor of vaguely Clintonesque pro-globalization candidates on the debatable principle that any country’s poorest people always benefit when the free-market guy wins. The most compelling character in Boynton’s film is James Carville, blazingly telegenic as always, the life of the party in every meeting, selling cracker wisdom like magic beans, as unconcerned with the specifics of Bolivian politics and history as a coked-up lead singer asking a Cleveland crowd if Cincinnati is ready to rock. But the movie’s spine is an interview with Rosner, who Boynton walks slowly but surely toward something resembling a confession — that by twisting the campaign away from actual issues and swinging the election for a marginal candidate who lacked popular support, GCS was at least partially responsible for the chaos and death that followed. Ever the strategist, Rosner expresses his regret in a chagrined yet perfectly noncommittal sound bite: “It’s not facts I learned, but the texture of people’s political passions, and the texture of their sadness about what’s been stripped from them.”

In Green’s Our Brand adaptation, Bullock is “Calamity” Jane Bodine, a burned-out campaign-trail veteran who comes off the bench to settle a score with her old nemesis, a cheerfully despicable Carville manqué named Pat Candy, played by Billy Bob Thornton. We know that Jane is a once-great political strategist who fell from grace because the implausible newspaper headlines in the opening credits (“INCUMBENT LOSS ATTRIBUTED TO JANE BODINE”) tell us so; we know she has no family and no life and hasn’t run a campaign in six years because when campaign managers Anthony Mackie and Ann Dowd drive out to her snowy mountain cabin to pull her back into the game, they keep saying things like “She has no kids, no family, no life” and “Six years? She hasn’t run a campaign in six years?” The worst thing about this movie isn’t the fuzziness of its politics; it’s that it assembles pretty much the best supporting cast you could ask for — from Dowd and Mackie to Scoot McNairy and Zoe Kazan — and gives them nothing to do but stand around in conference rooms asking dumb questions for the audience’s benefit. “This thing with Candy,” McNairy’s adman character says at one point. “It’s like they got some Sicilian blood feud going on. Did they used to work together?”

You will maybe not be surprised to learn that Jane and Candy do have a history, and that it’s connected to Jane’s amoral disengagement from the ideological side of the political game. The tension between them doesn’t play, because Thornton and Bullock never seem to be on the same page performance-wise; watching them cycle through emotions in their scenes together is like watching two slot machines try to ring cherries. Apart from a thudding moment in which Mackie’s character establishes his idealistic streak by admitting that he spent time in a Buddhist monastery years ago — and McNairy’s perfect creative-class-douchebag wardrobe notwithstanding — you never really get a sense of who these characters are, professionally or as people. If they’re experienced enough to get jobs running a presidential campaign in a large Latin American country, they should probably be at least somewhat capable, but the movie’s arc requires them to be thumb-sucking babies about modern politics, so that Bullock, who drives the narrative, has no choice but to rediscover her inner shark and start running shit. The problem with building the story this way is that the point it’s trying to make about the morality of American consultants exporting U.S.-style campaigning (and American ideology) to foreign nations is at odds with our desire as an audience to see Bullock and the good guys beat creepy old bald Billy Bob Thornton and deliver a win for their faux-Goni candidate, played by the great Joaquim de Almeida (Fast Five).

It won’t win anything, but the best movie I’ve seen this Oscar season is Denis Villenueve’s Sicario, another movie about an idealistic female protagonist facing the dawning realization that she’s complicit in making the world worse. Our Brand is essentially Sicario with a happier ending, in which the cynical Jane’s decision to do one right thing is imbued with the power to zero out her moral ledger — partly because the credits roll before the bloodshed starts.