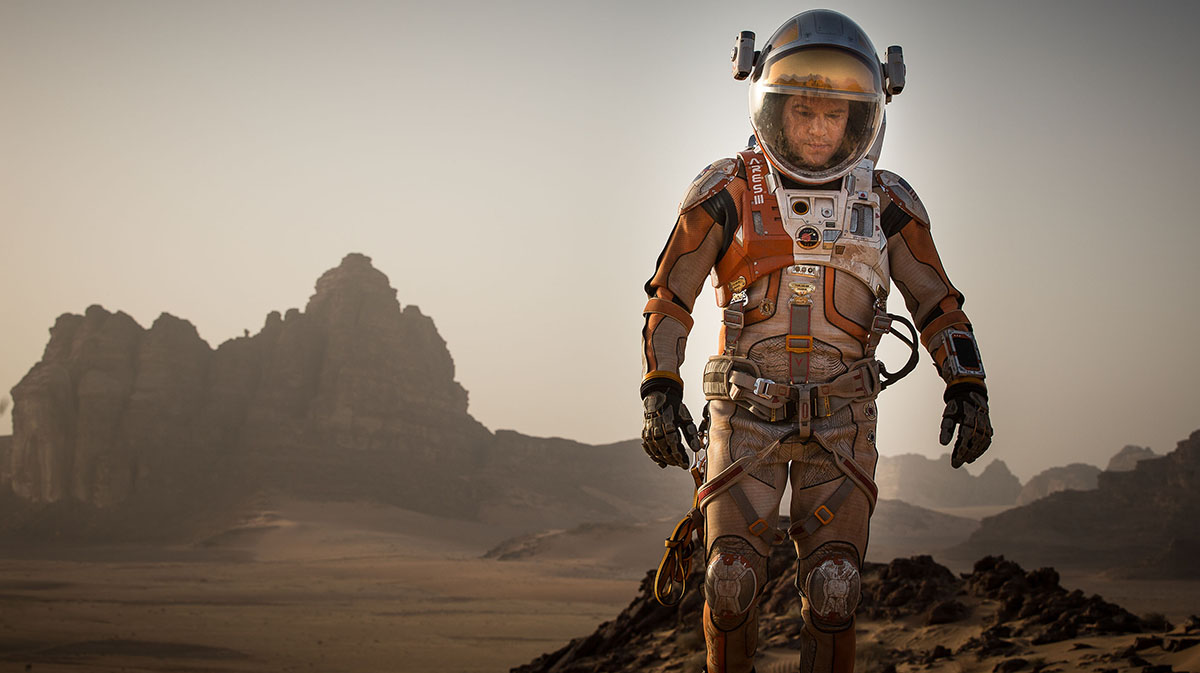 At times The Martian feels like Ridley Scott’s apology to anyone still annoyed by the degree to which Prometheus hinged on ostensibly brilliant scientists making fatally dumb-ass choices. It’s a brisk, funny piece of competence-porn sci-fi about a stranded astronaut (Matt Damon) who totally keeps his shit together — and uses it to fertilize a DIY potato crop on a planet where no food grows. The story, adapted by Drew Goddard from Andy Weir’s 2011 novel, is basically Robinson Crusoe (or 1964’s Robinson Crusoe on Mars). But the specific brand of ingenuity it celebrates feels thoroughly 21st century. Damon’s Mark Watney is (luckily enough) a botanist, and (even more luckily) an upbeat get-er-done maker-nerd who masters the harsh Martian landscape by approaching each obstacle as a matter of lifehacks or death. He even vlogs the whole experience into a GoPro; I kept waiting for him to 3-D-print a carbon-fiber wallet or stop and talk into the camera for 20 minutes about why you should always add turmeric to your Bulletproof coffee.

You may remember Stranded Astronaut Matt Damon from such films as Interstellar, but the similarities are only superficial. Christopher Nolan’s film was a cerebral puzzle box with “Cat’s in the Cradle” heartbreak at its core — astrophysics notwithstanding, it was a fable about a man who goes off to work and comes home to find his children all grown up. The Martian doesn’t treat space as a metaphor. It’s not a vast and forbidding Kubrickian void where puny humans tremble in the face of the incomprehensible. It’s not even a crucible where characters must confront their tragic Earthly backstories in order to carry on, the way Sandra Bullock does in Gravity. Space is just a problem, to be solved by groups of smart adults armed with duct tape and plastic sheeting and scale models and binders full of ASCII code and dry-erase boards. Once he’s performed some fairly gruesome autosurgery on injuries sustained in the accident that causes his crewmates to leave him for dead, the next thing Watney does is sweep their left-behind personal effects into plastic storage bins, as if homesickness is a waste of calories. Level heads prevail, both on Mars and back on Earth, where the news of Watney’s survival launches a rescue effort led by a cavalcade of stars. 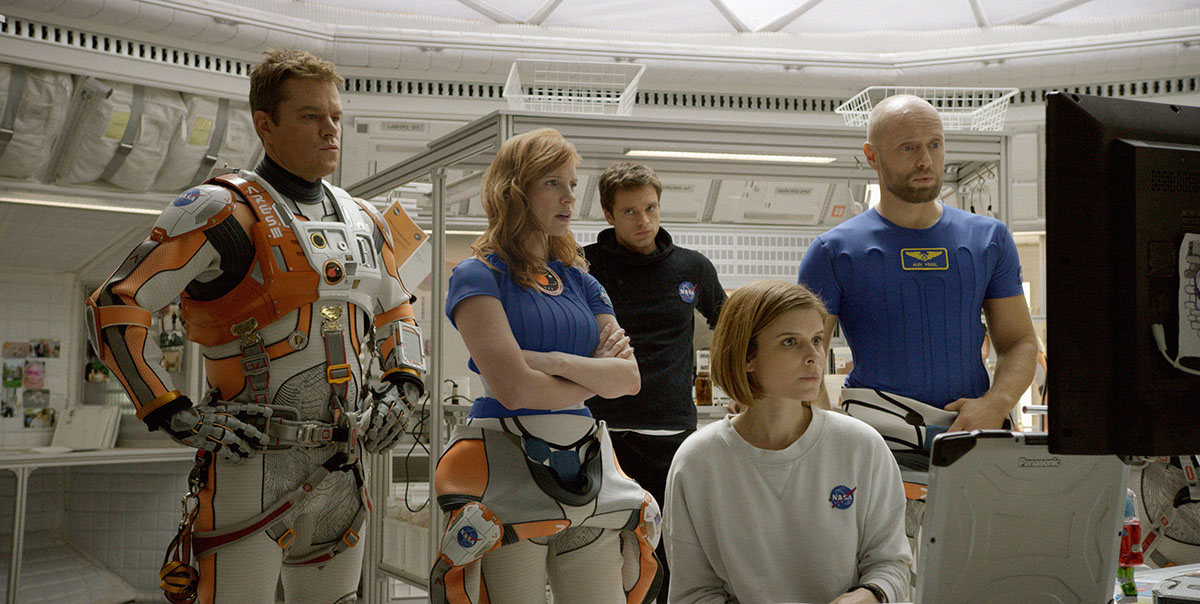 Special-effects categories notwithstanding, you couldn’t quite call this an Oscar-bait movie, but casting-wise it sure looks like the Oscars, or at least the Golden Globes. Jeff Daniels plays the director of NASA, mediating the occasionally divergent priorities of a team that includes Chiwetel Ejiofor, Kristen Wiig, and Sean Bean (plus the great Mackenzie Davis from AMC’s Halt and Catch Fire, ably holding her own in intimidating company). Jessica Chastain, Michael Peña, Kate Mara, and Sebastian Stan play Damon’s erstwhile Mars-mission crewmates, who sport comfy shawl-collar astro-sweaters and Lululemonish NASA hoodies and float around a spaceship furnished like a hip architecture firm. At NASA’s Jet Propulsion Lab in Pasadena, the movie picks up Donald Glover (channeling both Troy and Abed as a possibly on-the-spectrum hipster astrophysicist) and Prometheus‘s Benedict Wong, whose performance as the Jet Propulsion Lab’s long-suffering boss comes out as one long deadpan sigh. Even the Chinese space-program bigwig who appears in a couple of brief scenes is played by a star, the popular Hong Kong character actor Eddy Ko. His subplot, in which American ingenuity gets a much-needed assist from Chinese good sportsmanship, feels like a nod to the foreign-market realities that shape movies made at the $100 million price point.

The China scenes are in keeping with the movie’s cheerful worldview. Goddard has described the movie as “very much a love letter to NASA,” and a story in this week’s Hollywood Reporter detailed the production’s “unusually close relationship” to the space agency, from the lengthy phone chats Sir Ridley had with a NASA scientist known as “Dr. Mars” to a September preview screening aboard the International Space Station. When asked if the timing of this week’s announcement regarding liquid water on the Red Planet was NASA doing the production a viral-marketing solid, Goddard told Indiewire, “We should be so lucky.”

And in return for NASA helping make this movie look real, Scott & Co. have made NASA look good. Even when the plot requires Daniels to balk at a particularly risky Hail Mary solution, the script takes care to distinguish his caution from cowardice by having him remind Bean that “Every time we lose one, the world forgets why we fly.” Ironically, though, the film goes about restoring our faith in space exploration by glossing over any connection between this government agency and the actual government — apart from a passing reminder that Chastain’s crew is part military — and instead ascribing to it the virtues we associate with bold private-sector companies. This is a nimble, rule-bending, virtually red-tapeless space program, ever ready to pivot to the next great outside-the-box idea — a dot-gov that behaves like a dot-com, with Damon as the ultimate corporate self-starter doing more with less.

Watney curses Mars and his bosses, and gripes repeatedly about Chastain’s Commander Lewis leaving behind an iTunes library full of nothing but cheeseball disco hits, and when he runs out of traditional condiments, he seasons his potatoes with crumbled Vicodin. But we never see him shed a tear, curse his God, or otherwise appear to be seriously entertaining the notion that Mars (or “Turn the Beat Around”) can break him. He does convey some instructions about what to tell his parents if he doesn’t make it, but it plays like one more to-do list item being crossed off. It’s hard to create a sense of jeopardy around a movie star in a scenario like this — hard, but not impossible. A classic Robinsonade like Cast Away works whether or not you believe for a second that Robert Zemeckis will kill Tom Hanks, because what’s actually in danger is the self Hanks brought with him to the island. You can be sure even on first watch that a rescue’s coming, but you worry there won’t be anything left of that guy when they get there. In The Martian, Watney never loses his ability to find the humor in his predicament, and if this eminently enjoyable movie has a flaw, it’s that his unfailingly even keel — and Damon’s careful avoidance of anything remotely histrionic — robs his logistical struggles of any real psychological dimension. The barrenness of the planet never really gets to him, which keeps it from quite getting to us.

Songs of the Week: 'Where Are Ü Now' Covers, Mac Miller, and the 'Unbreakable' Janet Jackson