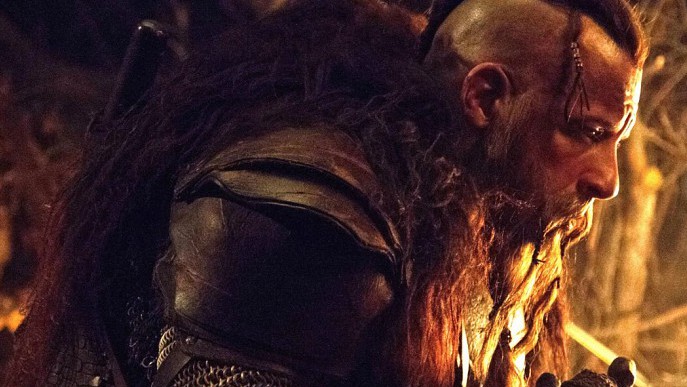 All the bombs went off at once this weekend at the multiplex. Every single one of the new studio releases flopped and the overall box office suffered accordingly, down more than 10 percent from last year, with none of the newbies coming close to 2014’s pre-Halloween Ouija board or John Wick’s lucrative puppy vengeance. How bad was it? Even Jason Blum couldn’t pull off a hit.

Hollywood somehow so perfectly synchronized its floppage that analysts looked to higher powers for an explanation: maybe the new Star Wars sucked all the extra money out of our wallets with its insane ticket presales? Or maybe all those fancy prestige pics steering clear of Halloween (when we’re too busy getting trashed in costume to watch movies) caused the carnage? Frankly, there’s no need for supernatural explanations: This weekend’s new releases just managed to be madly, deeply, truly bad, each in their own special way. Which is why this Monday morning, the winner is … well, no one.

Let’s dig into the postmortem, because we’ve got a lot of cadavers to dissect. First up is the least mangled body of the bunch, Paranormal Activity: The Ghost Dimension. The Paranormal Activity franchise has been hoovering cash for so long that it’s no surprise it would finally run out of gas right about now. The latest opened to a franchise low of $8.2 million domestic and $26.2 million worldwide. On a budget that Deadline pegs in the mid-teen millions and a decent marketing spend, that’s not the end of the world, but it’s possibly the end of the franchise. Ghost Dimension fell below already-low expectations of $10 million to $12 million domestic for the weekend, and didn’t make enough to break into the top five. That’s pretty bad for a scary movie meant to cash in on the Halloween spirit with few true genre competitors. The catch here is that Paramount was attempting a new experiment, trying to shorten the sacred “window” between a film’s theatrical release and its availability on VOD from the traditional 90 days to only 17. Predictably, this pissed off a chunk of theater owners, and while Paramount got some folks onboard (such as AMC and Cineplex), no one else wanted to show it, so the film played in 1,656 theaters — about 1,000 fewer than the last installment, Paranormal Activity: The Marked Ones. However, it’s hard to tear up for the dearly departed here; its sacrifice at least may teach Paramount something about what happens when you make a movie available on VOD two weeks after its multiplex release.

Moving on, a dishonorable mention for most ostentatious implosion goes to Vin Diesel’s The Last Witch Hunter. In raw-dollar terms, this is undoubtedly the biggest bomb of the weekend, opening to $10.8 million for fourth place on a $75 million–to–$80 million budget, and presumably way too much on marketing. International returns didn’t soften the blow much, either: Right now it stands at $24.2 million worldwide. Now, given its poor trailer, its execrable 14 percent rating on Rotten Tomatoes, and the fact it isn’t a Fast & Furious film, no one should drop dead of shock that Witch Hunter would fail. In fact, it’s probably the 95 million people liking Vin Diesel’s Facebook page who kept it from bombing even worse; although it’s still his lowest opening since Babylon A.D. ($9.5 million back in 2008). But no one’s going to make any money on this sucker. The best that can be said is that Lionsgate split the cost with financing partners, which Deadline claims limits its losses to $10 million. At least it will force Diesel to focus all his Oscar campaigning on Furious 7.

And on we roll. Before getting to the bottom of the barrel, we should take a slightly dispirited detour to Steve Jobs. Technically, the biopic about the Apple founder has been in limited release for two weekends, so it’s not “new.” However, this weekend marked its expansion into nationwide release in 2,493 theaters. Given the records that its limited opening set,1 Universal’s hopes were high, with projections in the range of $13 million to $17 million. Well, that didn’t happen. Despite sterling reviews, Oscar buzz for Michael Fassbender’s performance, and Aaron Sorkin’s writing, Steve Jobs managed just $7.3 million in wide release, only slightly better than Ashton Kutcher’s much-derided Jobs ($6.7 million), giving it $10 million in its third week. With a budget of $30 million, and with marketing allegedly around $35 million to $40 million, that’s definitely a kernel panic for Universal.2 However, Steve Jobs is an Oscar contender, and if it can stick around until nomination time, it should claw back a little spare change. This financial setback aside, it’s not a total disaster; as with so many prestige pictures, Steve Jobs is as much about pride as box office.

Losers: Bill and the Holograms

Now, the worst for last. Hitting a new low for studio films, both Rock the Kasbah, starring Bill Murray, and Jon M. Chu’s quixotic adaptation of the cult kiddie show Jem and the Holograms raced to the bottom for the title of worst opening for a major-studio wide release ever. EVER. And the winner, by a nose? Jem and the Holograms. While Rock the Kasbah earned a stunningly pathetic $1.5 million in 2,012 theaters, marking the worst opening for both Murray and Open Road Films, Jem and the Holograms dug its grave even deeper — $1.3 million from 2,413 theaters. At least Zac Efron isn’t lonely anymore: Both films leap-frogged his August bomb, We Are Your Friends ($1.8 million), coming in just above the notorious Delgo and Oogieloves in the Big Balloon Adventure as the third- and fourth-worst openings for any type of film, studio or otherwise, in more than 2,000 theaters. In the case of Rock the Kasbah, you don’t need a magic eight-ball to understand why it failed when Manohla Dargis’s New York Times review starts with, “Clichéd, enervating, insulting — it’s tough to settle on a single pejorative for Rock the Kasbah, though abysmal might do.” Apparently, our generational love for Bill Murray extends only so far, and when even Shia LaBeouf bails on your movie beforehand, you should probably know better.

But Murray can thank Jem and the Holograms for preventing us from wasting any more digital ink on his personal Ishtar. The best thing that Universal can say about Jem’s ignominious new record low is that the film itself cost only $5 million because it came from budget-conscious megaproducer Jason Blum. So even though it made barely any money, it can’t lose all that much, and its red ink might as well be a rounding error in Universal sibling Jurassic World’s global gross. We’ll let others riff on how woefully misguided Jem and the Holograms was. But suffice it to say, when your director receives death threats from the few fans who actually cared about this forgotten ’80s Hasbro cartoon/30-minute weekly commercial in the first place, you know you’ve failed on just about every level.

Was there any reason to praise the box office this weekend? Not really. The Martian is in its fourth week of release, so its taking no. 1 ($15.9 million) is less a mark in its favor than a commentary on everything else’s stunning failure. At the art house, Focus’s Suffragette made $77,000 in four theaters, not an overly auspicious start for an awards hopeful, but still better than either I Smile Back ($16,036 in two theaters) or Nasty Baby ($8,023 in two theaters) despite both being Sundance darlings. The only thing that earns even the shadow of a smile is the fact Steven Spielberg’s excellent Bridge of Spies dropped only 26 percent in its second weekend, earning $11.4 million, which means it just might chug through awards season to a decent return. Though in a way, it’s a sad day when you have to root for a mainstream studio release from Tom Hanks and Spielberg just to break even.