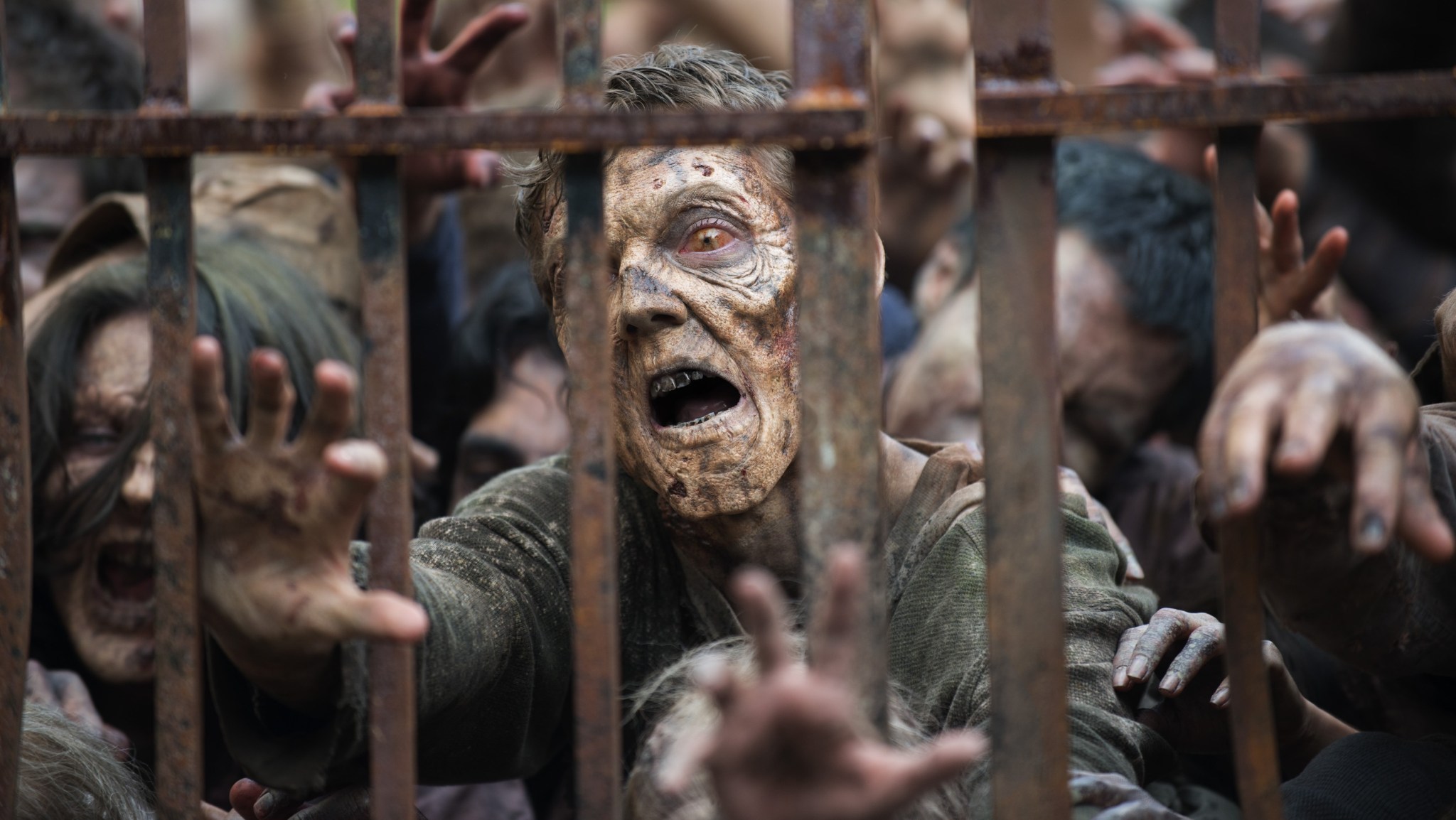 For a moment — no longer than the time it takes Rick to sprint several miles, the sound of a truck horn to carry across a few states, or an unknown Alexandrian to reveal his lack of survival skills — it looked like The Walking Dead’s ratings were headed in an unprecedented direction: down. Yes, AMC’s herd was still unimaginably massive, but two episodes into the juggernaut’s sixth season, a few bored or frustrated viewers were peeling off at the edges, summoned by the distant sounds of Sunday Night Football or the siren call of premium TV.

Well, so much for the potential popularity decline. Like Rick redirecting wayward walkers — but far more effectively — showrunner Scott Gimple brought any roamers back to the fold with an eventful third episode, “Thank You,” which ended with one major character presumed dead and another bleeding and marooned in a walker-flanked RV. For the third consecutive week, AMC spared no expense on special effects or speaking parts for strangers, making the most of the hours it took to get an army of extras in costume. But this time, the crew capped off a frantic 44 minutes with the completely confirmed, only semi-off-screen, not-at-all-dubious death of fan favorite Glenn, who dove off a Dumpster into an undead mosh pit after Nicholas — the stringy-haired Alexandrian whom he’d tried to redeem — gave the walkers easy access to his skull via self-inflicted gunshot wound.

Yes, that Glenn, the first Season 1 survivor to die since Andrea mercifully succumbed in Season 3. The Glenn whose fashion sense had come so far since the days when he hid his flowing black locks beneath a suspiciously logo-less baseball cap. Who was always quick to remind Rick not to lose his hold on humanity, lest the show surrender its capacity for future debates about etiquette in a kill-or-be-killed world. Whose death not only promised to make Maggie more sad than she’d been since that bad cop killed Beth, but also made Abraham and Rosita the only survivors still certifiably doing it in a strangely non-promiscuous postapocalyptic America.

Or, you know, not. As soon as Glenn’s head hit the ground, geysers of blood blocking our view of his body, and entrails of unknown origin beginning to be gobbled, the Internet entered super-sleuth mode, inspecting suggestive set photos, parsing Comic-Con comments, counting upcoming credits, and dissecting Steven Yeun’s absence from Talking Dead, where the actors who play recently killed characters traditionally take one last lap on Chris Hardwick’s couch.

If Glenn is alive — despite the sad music, the walkie-talkie callback to the premiere, and the often-fatal show of compassion for another character — his non-death would be The Walking Dead’s most memorable misdirect since Judith’s bloody baby carrier. Maybe he’ll crawl under that Dumpster, smear himself with the guts of one of the walkers he shot, and lurch away whistling. Maybe he’ll bide his time until his undead assailants are distracted by the next unforeseen crimp in Rick’s FUBAR plan to free the black-and-white walkers from Pleasantville. Maybe Morgan and his Non-Lethal Suppression Staff will clear out the alley like Neo beating up Agents Smith. This wouldn’t be the first time Glenn has survived being surrounded by walkers with no easy way out.

We won’t know until next week, or more likely the week after, if Episode 4 is in fact 90 minutes of Morgan. Until then, we’ll wait and wonder whether we’d rather watch a Walking Dead without Glenn or a Walking Dead in which someone survives this: 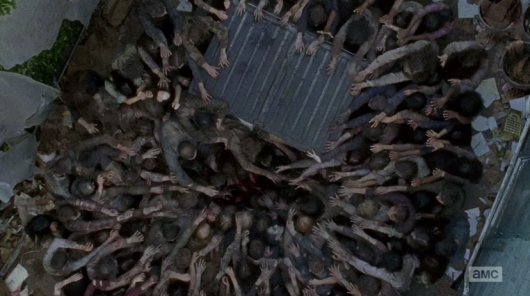 Option A would deprive us of a likable character, albeit one who’s spent most of his screen time on supply runs. Option B would force us to question everything 70 episodes have taught us about the odds of survival after being buried beneath a writhing pile of the undead. Neither outcome belongs to a world we want to live in. But if The Walking Dead has taught us anything, it’s that the world only gets worse.

Until Gimple clears up the confusion, Glenn is only as gone as Jon Snow. And frankly, it feels wrong to focus on someone who’s still MIA when we should be mourning the five souls whose innards we definitely saw on Sunday. So while we keep candles burning for Glenn and Rick, who’s nursing a nasty wound from a walker’s face-knife, let’s take a moment to remember five fallen citizens of Night Vale–esque Alexandria, where the population is whatever-we-feel-like-this-week and any unfamiliar faces have “been there the whole time, just quite busy.” 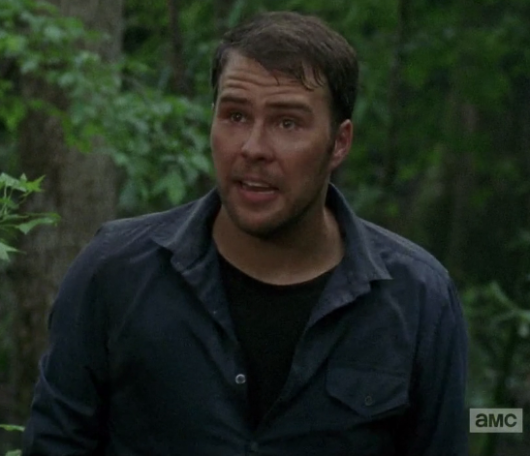 Barnes spoke truth to power. “[Rick] brought us all out here to die,” he said, shortly before dying after being brought out there by Rick. “He killed Carter,” he added, which we all indisputably saw in the previous episode. “Now they’re in trouble back there, and we’re done,” he concluded. “We’re good as dead.” A minute later, the only walker within a hundred yards was giving him a hickey. Say this about Barnes: He could’ve passed a polygraph. “Nothing is known about Barnes’ life before or during the outbreak,” his Walking Dead Wiki stub says, but we can assume he led his life like he left it: without telling a lie. “I’m going to get killed by a katana,” he might have said in his final seconds, had he been able to form sentences through the huge hole in his throat. Barnes’s button-up may have been blue when the episode started, but by the time he bled out, his shirt was as red as his role. 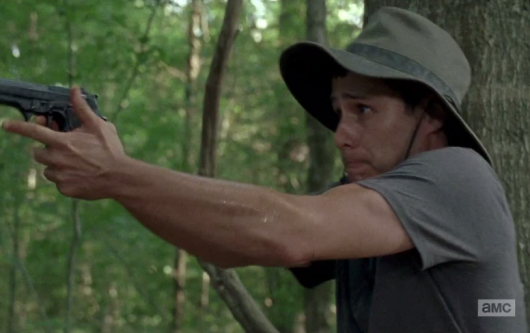 Sturgess is Alexandria’s gardener, which means Rick’s group has him to thank for those well-manicured lawns. Otherwise, we know only two things about him: He has an itchy trigger finger, and he’d never leave his beloved boonie hat behind. When we see that sweet lid sitting on the pavement, we know he’s a goner before the group comes across his corpse. Between Sturgess, Nicholas, and Pete, Alexandria leads the country in cowards per capita, far outstripping the coward count in the much larger Los Angeles of Fear the Walking Dead. With Sturgess tending to the great garden in the sky, Alexandria faces a far greater threat to its tranquility than walkers and damaged walls: runaway weeds. 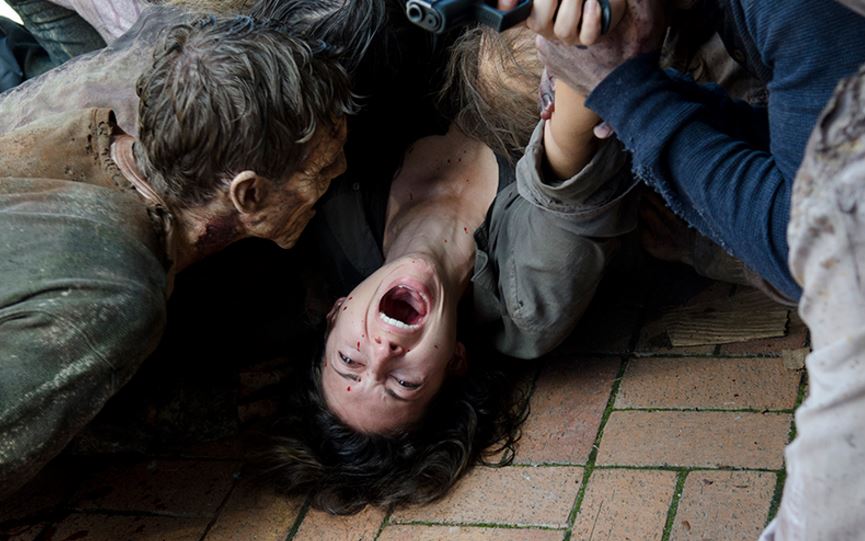 Annie’s only mistake was ignoring the well-known fact women are incapable of keeping their balance while fleeing through a forest. She failed to take the proper precautions: slow, dainty steps, and constant scanning for the tree roots and twigs that so often fell the fairer sex. Had she paid attention to horror movies in her preapocalypse life, she would have learned this valuable lesson. Instead, she watched Rockies-Braves games, which offer all the horror with none of the survival skills. As a result, she became a burden to the group.

To her credit, Annie volunteered to stay in the pet store, recognizing that she’d only slow down the other survivors. They insist that she come with them but force her to hobble alone, while Scott gets to put his weight on Heath.

Naturally, Annie falls for a second time, while Scott survives the escape. Chivalry is dead. And so, sadly, is Annie. But she does die a hero, taking out two walkers instead of saving a slug for herself or firing a few into the backs of the comrades who used her as bait instead of letting her wait out the walkers inside the store. 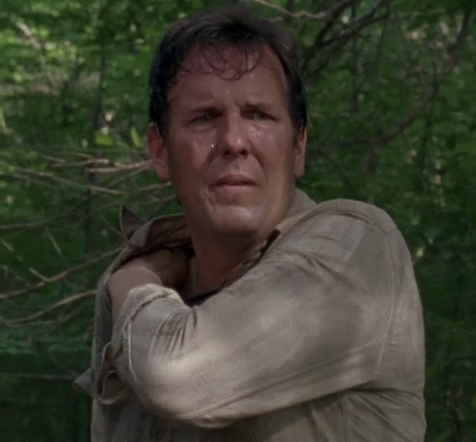 Humans have a deal with the undead, much like the one Manhattanites worked out with pigeons. If walkers catch us, they can kill us and eat us. But they’re supposed to announce their approach with an audible groan, just as a SWAT team is supposed to say “Police!” before bashing down the door. It’s only sporting to give one’s prey time to escape. David was dealt a bad break, being bitten by one of those rotting, rule-breaking Solid Snakes that sneak around noiselessly until they’ve inflicted a fatal wound. Despite the utter unfairness of his fate, he handled his bloody back like a pro. “I know what it means,” he said, confronting his fate with Barnes–esque honesty.

Unlike Barnes and Sturgess, David had a chance to fill in his backstory: He’s been married three months to an Alexandrian named Betsy, one of the bustling town’s many unseen citizens who for some reason skipped the meeting where Pete and Reg died. David uses his time in the store to write her a note, which begins, “Betsy my love, if you are reading this it’s because I didn’t make it.” But if Betsy ever reads it, it’s because she slaughtered the walkers who ate her husband and dug the paper out of the abattoir where his body lay until it turned. Not only did Michonne refuse to take his letter as a misguided motivational tactic, but she watched David die screaming in the most gruesome death scene since Noah’s without bothering to give him the same katana kindness she showed Barnes. It’s a cold world for characters on two-episode contracts. 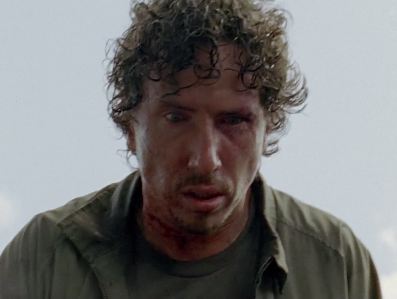 Finally, a fond farewell to Nicholas, the last to die in Alexandria’s Quarter Quell. No one was a worse navigator, or more likely to lead his companions to a burned-out building, walker-infested warehouse, or deadly one-way street. No one was more liable to zone out at inopportune times until someone screamed “Nicholas!” and snapped him out of slow motion. No one made a more convincing “I’m about to throw up” face. No one bled blacker blood. No one did less to deserve Glenn’s trust while earning it anyway. And no one was quicker to abandon an ally when walkers were around, even if suicide was his only means of escape. For so many reasons, Nicholas was no Barnes.

Nicholas is survived by his son Mikey, who with any luck will grow up to be braver and have better hair.