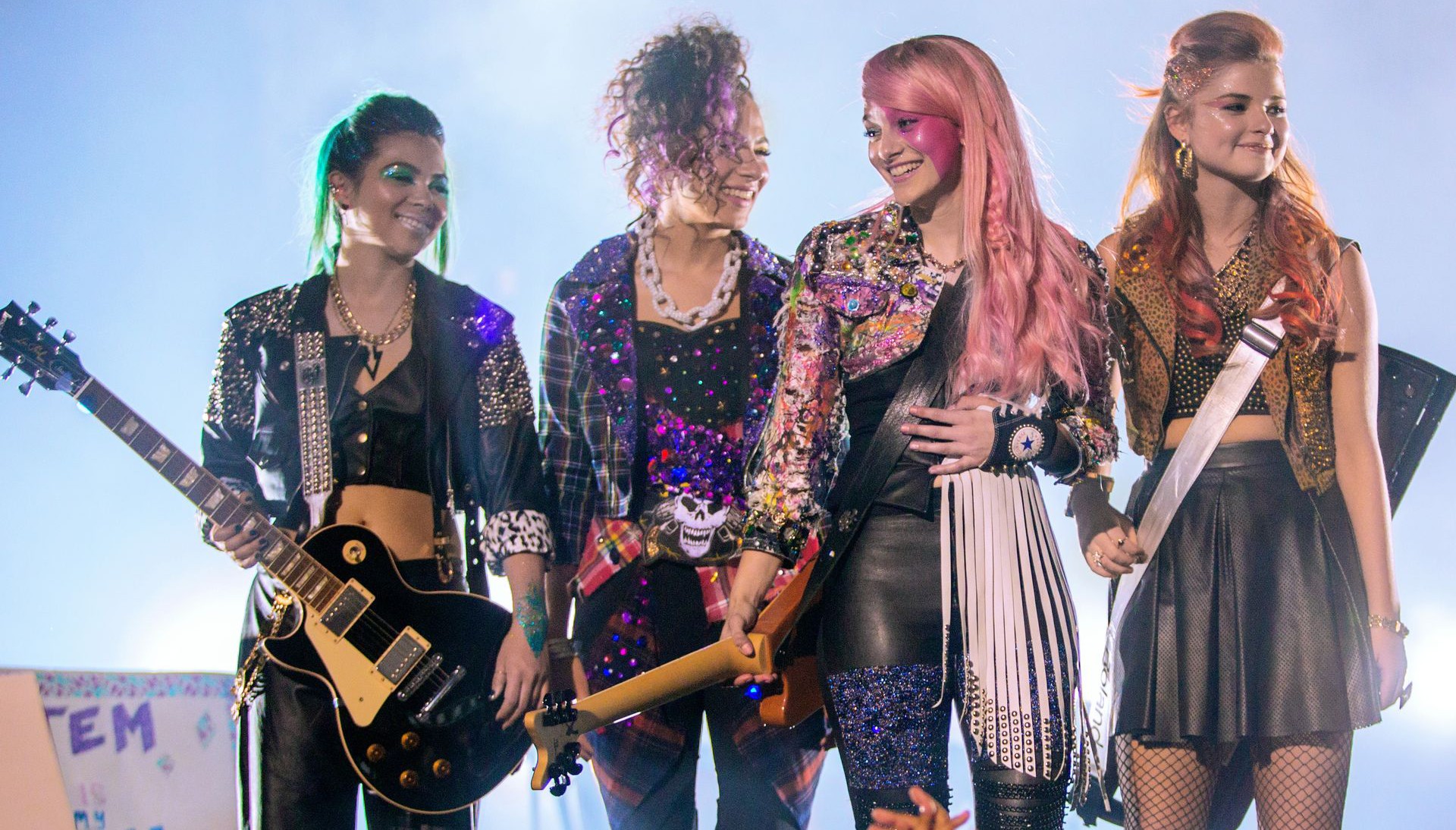 I love B movies. I generally love them more than A movies. B movies are unpretentious, they’re low-budget, they aren’t angling for awards or prestige. They’re just trying to entertain people and make some money, and I respect that. B movies don’t have to be good, and they can even be bad. All they have to do is keep my interest. While watching Jem and the Holograms, I kept thinking of other B movies in a similar vein: the Britney Spears vehicle Crossroads, the criminally underrated Josie and the Pussycats, and the effervescently sardonic Spice World.

Jem lacks one crucial thing that these other movies have: jokes, intentional or accidental. But what it lacks in humor it makes up for in sheer weirdness — it’s a master class in How Did This Get Made? It feels focus-grouped to within an inch of its life, but it’s so strange that it’s impossible to imagine what process led us here. It’s coproduced by Justin Bieber Svengali Scooter Braun, and you can feel what the makers are going for — Pitch Perfect with a rock band — and laugh when it turns into accidental outsider cinema by virtue of its inane plotting and bizarre choices. But I was never bored, and that’s what counts — there’s so much strangeness to process in Jem. I laughed out loud a few times, the hardest when Jem visits her childhood home in Los Angeles and it’s the same Angeleno Heights Victorian gingerbread house that played the whorehouse where Dick Whitman/Don Draper grew up. I also laughed when two separate characters in different scenes wore Velvet Underground shirts.

Director Jon M. Chu,1 responsible for several of the sequels in the immensely entertaining Step Up series and director of the two fascinatingly evangelical Bieber documentaries, has been tasked with making a musical for social-media-savvy millennials. This is telegraphed through some experimental choices: location-establishing shots are shown on Google Earth and fake YouTube videos are woven throughout the film. Some of it works. Chu’s choice to cross-cut scenes of conflict with purposely low-quality (i.e., “Internetty”) video clips of drum battles actually feels fresh. And if the movie’s musical sequences were just better staged and conceptualized, Jem might have made more sense. My friend laughed as Jem strode out on stage for the climax — impossibly, acoustically finger-picking a Flying V guitar.

The intra-band friendships are barely established before being pushed aside for all the other exposition. Jem refuses to sell out her friends, but the movie refuses to give her band any distinguishing traits besides hair colors. As it is, it’s a dance movie without any dancing, Ladies and Gentlemen, the Fabulous Stains without anything resembling true empowerment. The performance sequences are jarring, mostly because making Jem’s music sound like Mumfordcore stadium folk-rock with Imagine Dragons live drumming contradicts the band’s stylization as ’80s rock stars. In today’s terms, that means they look to us like a 2000s electroclash band — with her pink triangular face paint and hair, Jem resembles a desexualized Peaches.

That 2000s/’80s feeling persists, but visual signifiers bear no relation to actual content in Jem. You can sense the hand of crowdsourced studio opinions — Jem is neither a rock star nor a pop star, and her music seems distinctly current in that it feels like the filmmakers boiled down a bunch of songwriters and styles into a “what’s not to like?” folktronic stew. The movie’s “hit” song, “Youngblood,” combines shout-along folk rock with party pop but avoids veering into actual instrumentation or specificity. This lack of personality runs counter to the theme of self-actualization that the filmmakers cold-cock the audience with at every turn.

Jem is ostensibly about authenticity and remaining true to yourself, but the heavy hand of corporate influence and groupthink is never far away. It’s based on a dormant Hasbro property that was created to sell dolls, which became hugely popular for a moment in the mid-’80s. The Jem cartoon was created by Christy Marx, who wrote for G.I. Joe (another Hasbro property) before creating Jem and the Holograms. It put an American twist on some anime tropes — a magical girl squad each of whose members are associated with a color (as in Sailor Moon), secret pop-idol identities much like those of superheroes, and, of course, a semi-sentient computer built by Jem’s dead father. The Jem cartoon was animated by Japanese studio Toei Animation, which did anime classics like Cutie Honey, Galaxy Express 999, Dragon Ball, and Sailor Moon. Toei also did Hasbro’s Transformers, G.I. Joe, and My Little Pony. The show and product line were so popular that Mattel made Barbie a rock star with a backing band called the Rockers and created an accompanying cartoon just to compete with Jem.

The ’80s were strange in every possible way, and one of them was the innovation of reverse-engineering TV shows around which to build merchandising. Unlike Josie and the Pussycats or Spice World, Jem isn’t a savvy or cynical commentary on merchandizing. But what would one expect from a movie licensed to cash in on nostalgia for a cartoon invented to sell dolls? The film’s argument about authenticity barely makes sense in a modern context. Is selling out even a thing in an era when everyone has a “personal brand” online that they vigorously market nonstop? The idea of Jem has potential — bifurcating human identity into Internet/stage persona and real person is a rich vein mined by Hannah Montana and Perfect Blue alike. But this isn’t a movie for grown-ups, it’s for kids. And so no real darkness is allowed to enter the narrative. Everything in Jem is so clean it squeaks, except for Juliette Lewis as the villain Erica Raymond. Lewis sweeps in and spins golden line readings. She’s fabulously high-camp as an evil record executive, in the grand tradition of Parker Posey in Josie and Gina Gershon in Showgirls — she knows what movie she’s in.

As my friend and I walked out of the theater, a fellow audience member turned to me and said, “What would Siskel and Ebert think?” It was as though this person had overheard my thoughts, because I said, “Well, Ebert might have liked it, because he wrote Beyond the Valley of the Dolls,” a Russ Meyer movie about a girl band whose members come to Los Angeles to make it big and end up having their souls destroyed by a Machiavellian music business mogul, which is pretty similar to the plot of Jem. Except the band in BTVOTD, christened the Carrie Nations, takes acid and gets naked and generally behaves in a way you might call rock ’n’ roll, including playing rock songs. Jem and the Holograms are so hopelessly wholesome that the movie can’t even bother to give Jem a downward spiral where she’s seduced or at least tempted by the perils of fame let alone sex and drugs.

Among the movie’s many odd choices is the one to depict the truly outrageous story in a semi-naturalistic fashion, rather than going cartoony or exaggerated. It starts out as a story about a rock band made up of sisters — a sort of “Haim and the Holograms” — and then clumsily morphs into mundane science fiction somewhere about halfway through. It’s strange to have to ask a movie to lean more into its weirdness when the main plotline involves the protagonist discovering a magical robot. Jem, née Jerrica, finally discovers how to click her magic purple earrings, a transformation sequence that also clicked some weird nostalgic ASMR part of my brain that doesn’t remember much about Jem but instinctively remembers that much. But she doesn’t even transform into Jem through this maneuver — it just triggers a hologram of her dead father to appear and explain his dreams for her. This was the point at which I found myself hoping Jerrica’s deceased father the robot scientist would reveal to his daughter that she, too, was a replicant, that her empathy and humanity were just programs her mainframe had been built to run. In that story, like in the real world, Jem was created expressly to be a product — selling out is what she was meant for all along.