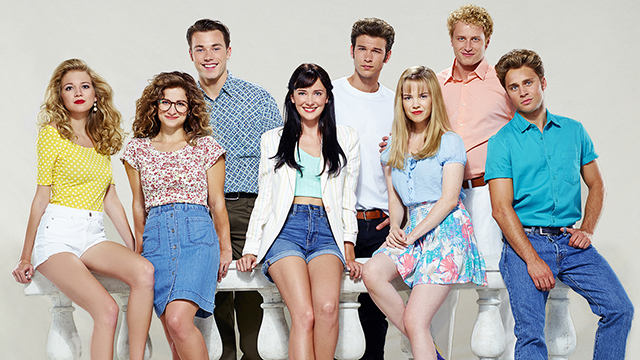 For the obsessive fan, it’s natural to want to find out the salacious details behind their object of affection — whether it’s a movie star, a band, a TV show, or a novelty dance craze. Schlock master Lifetime has figured out an ideal way to capitalize on our shared desire for secrets. After scoring a hit with the surprisingly dull The Unauthorized Saved by the Bell Story, Lifetime decided to go all in on behind-the-scenes biopics about popular TV shows from the 1990s. Earlier this year it rolled out The Unauthorized Full House Story, and this month brings The Unauthorized Beverly Hills 90210 Story and The Unauthorized Melrose Place Story.

The cast of Unauthorized 90210 looks like the cast of the real 90210 if you squint as hard as the guy who played Luke Perry squinted the whole time. It’s fitting that this exposé would end up on Lifetime, since so many of 90210’s stars eventually landed in Lifetime movies. None of the 90210 cast ended up being a big star, but many achieved the less glamorous, more stable existence of the consistently working television actor. Three 90210 cast members have been on Dancing With the Stars, which tells you how famous they are now. 90210 is still everyone’s biggest credit, although the “where are they now” title cards that close the TV movie remind us that Perry did a shower scene on Oz.

Unauthorized 90210 only covers the fiery Brenda years. Shannen Doherty’s insistence that she was the biggest star (and her accordant diva behavior) alienated her from her less-experienced castmates, but the movie ends up portraying Doherty as the main focus, making a decent argument that she was 90210’s biggest star for a reason. When she leaves the show, the movie ends, even though 90210 went on for another six seasons. Doherty was the original Lindsay Lohan — a child actor who stormed through Hollywood clubs but remained bankable until she started showing up late for work all the time and getting in trouble with the law. Brenda remains a fascinating character, and she’s portrayed with accurate pouty resting bitch face by Samantha Munro, who did time on Canada’s much less glossy teen franchise Degrassi: The Next Generation. Lifetime tried reasonably hard to replicate 90210’s Twin Peaks–adjacent rockabilly 1950s-1990s look, even if it seemingly blew the whole budget on pompadour wax for Brandon and Dylan. There are plot threads about Gabrielle Carteris unbelievably faking her age down to play Andrea, the character who ends up being the show’s lame duck. There are also some nods to Brian Austin Green’s conscious hip-hop MC career and ladies’ man reputation.

The film ends with Alyssa Lynch reprising her role as Tiffani-Amber Thiessen from The Unauthorized Saved by the Bell. This suggests the Unauthorized movies are a self-contained, Marvel-esque connected universe — an alternate realm where everything is a little bit more … Canadian. And definitely a lot cheaper looking. Most frustratingly, the mystery of why Ian Ziering’s name is pronounced “eye-an” never gets solved. Why make this film if not to give us all closure on that topic? I also kept getting distracted by the voice that Simpsons star Dan Castellaneta uses to play Aaron Spelling. I decided to spend a fair amount of time during the film looking up clips of Spelling to see if he really sounds like that. I guess he sorta does.

I wished at times that the movie was a full-on Spelling biopic rather than such a narrowly focused 90210 story. Spelling was a fascinating Citizen Kane of a self-made mogul, and I’d love to see a film that covered both the origin of how 90210 came to be and the years of Spelling’s childhood when he psychosomatically stopped using his legs. I’d love to see a Lifetime movie that deals with the origins of Spelling Manor, the tacky Westwood palace where Aaron and Tori lived. What’s in the film is interesting enough, but there’s so much splashy Hollywood detail we’re missing out on.

Make no mistake, though, the saga of making the real 90210 is covered nicely, and there’s a lot of fascinating stuff: censorship battles with the networks, behind-the-scenes drama with Doherty, the fact the show wasn’t a hit until the Beach Club–set bonus mini-season hooked teenagers on summer break. Despite my wishes for an epic Spelling family saga, the film does wisely home in on the core of 90210’s appeal: the Brenda-Dylan-Kelly love triangle. That story line was refreshing because it was composed of equally weighted parts. You could root for Brenda and Dylan, Kelly and Dylan, or for Brenda and Kelly to dump Dylan to save their own friendship. Watching Doherty chafe against Brenda’s Minnesota good-girl character until she went full Dark Phoenix was electric, and Jennie Garth’s good-girl portrayal of Kelly got more complicated when she betrayed her supposed BFF over a mutual dude. To suburban tweens enamored with the show’s setting, it was Shakespeare.

The movie gets into the show’s high-low appeal a little bit and how it was one of the first TV shows to mention AIDS. There’s a whole scene about how the show’s makeouts aren’t allowed to be too sexy (no second base), followed by a chaste montage of all the intracast hookups (no second base). The movie is best when it sticks to such Behind the Peach Pit After Dark fodder. There are worse ways to spend a rainy Sunday, but if you’re looking for a nostalgia fix, you’d be best off streaming old episodes of 90210 on Hulu.1