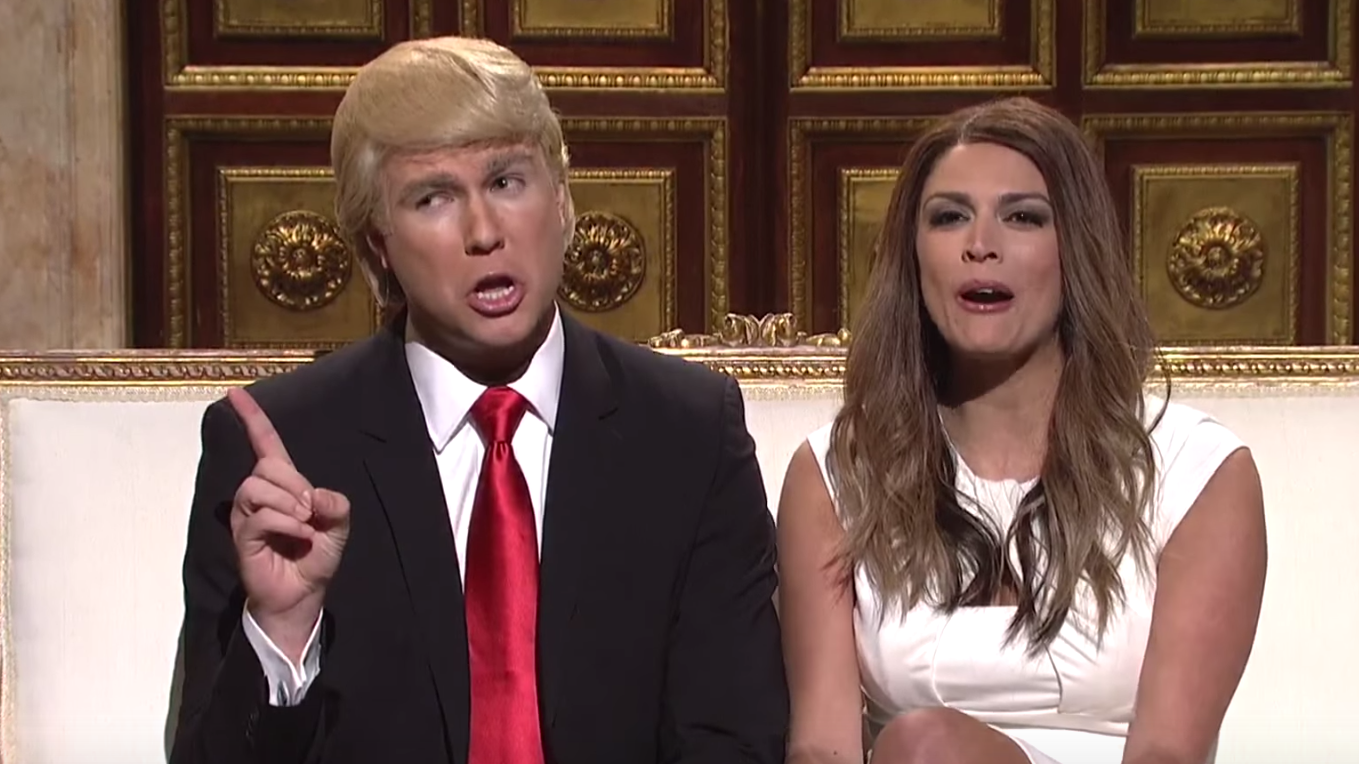 This weekend a certain show returned for its 41st season, and though the glamour of last year’s big anniversary celebration has faded away, the already-preposterous 2016 presidential election cycle is here to provide succor. We’ve spent all summer watching the Republican insanity pile, and finally we have SNL back to poke Trump; plus, the real Hillary showed up! Also on hand: Miley Cyrus, pulling double duty as host and musical guest, dressing like the recently elected queen of a postapocalyptic free-love splinter society that subsists entirely on hoarded caches of Cadbury Creme Eggs and candy corn. It’s Sssssssaturday Night Live!

Taran Killam has gotten the juicy assignment, and the show’s inevitable Trump cold open was a hot one: Immediately, Killam demonstrated that all you really have to do to evince the proper demagoguery is do that pursed-lip pout. That said, the real star of the sketch was Cecily Strong going full Slovenian as Melania Trump (Donald, introducing her: “I know what you’re thinking — who’s this? Another bangable daughter?!”) Strong got to play the fake straight man, going in at Donald for the polling-influenced, racist word salad that continuously leaves his mouth.

Cecily, with a wink: “I hear your poll numbers are down this week.”

Killam: “Mexicans are stealing our children.”

It was all kinds of uncanny. This thing might have legs!

First off: looking good in the air tie, Beck Bennett! Perhaps more importantly: Oh hey, look, it’s Hillary Clinton! No stranger to the show, HRC returned to play Val the bartender in conversation with Kate McKinnon’s Clinton. McKinnon is a madwoman, in the best sense of the word, and her take on Hillary is like an evolution of Amy Poehler’s: a bit brasher, a bit more insane — “God, I love a scalding hot vodka!”; “I will destroy him and mount his hair in the Oval Office!” Between fake Trump and fake Hillary, we are in some good hands rolling into ’16.

During the sketch, Hillary did her Trump (“Isn’t he the one that’s like, ‘Ah, you’re all losahs’?”), then got a bit of winking comeuppance for her record on gay marriage. That it came via McKinnon, the show’s first out lesbian cast member, was a nice touch. We also got the briefest of Darrell Hammond pop-ups as Bill (Hammond is the show’s announcer now, so he didn’t have to travel far), and Kate and Hillary doing a bit of “Lean on Me” together. A bit of a mess, but certainly fun.

Next, it was up to Hillary, in a sharp black suit, to intro Miley doing her weirdo freak-out rock. Ah, what a time to be alive.

Relatively, a tempered outing for Miley. She sang “My Way” in the monologue as the show montaged through the ignominious micro-celebrities of summer ’15, reminding us once again that she may have the strangest-ever discrepancy between speaking and singing voices. She played a bad girl at the sock hop with a friend named Nasty Jack and a mobile piñata. She did one conservative fake orgasm; she delivered one conservative weed joke. And her musical performances, for all of their gonzo Lisa Frank aesthetics, were actually quite lovely and serene.

“I had a dream,” she sang, while at the piano by herself, “David Bowie taught us how to skateboard but he was shaped like Gumby.” A photo of her deceased pet dog Floyd in a heart-shaped frame sat atop the piano. Miley cried a bit. You’d think SNL might say to itself, Let’s maybe sit out this experimental portion of the Cyrus career trajectory? That it chose not to is both wise and respectable.

Welcome, Josh Rudnitsky! The 25-year-old USC grad, who’d gotten traction on the Internet with such bits as “#DICKPIC” (“Get underneath. I’m trying to get the Stanley Kubrick shot”), was SNL’s only new onscreen hire this offseason. (Also, no cast members left, and Kyle Mooney, Beck Bennett, and Sasheer Zamata were all promoted to repertory players). After the hiring was announced, Rudnitsky was rightfully bashed for some pretty bad, dumb old tweets, but managed to last through the controversy to continue being a guy no one knows.

On Saturday, he had Miley Cyrus licking whipped cream off his face.

Misc.: The Orgasm, Mooney, and Pete

Elsewhere: Leslie Jones salvaged what was an absolute train wreck of a sketch with some wonderfully nutty expository monologue (“I can’t have your baby, Marco! You’re my brother’s husband! You gotta stay with my brother and finish out the con!”); in a sequel I might have been the only person asking for, Kyle Mooney went from doing a sex tape with Miley to marrying her to dying to make some sweet beats; and Pete Davidson almost went an entire appearance without talking about weed or his dick. Almost.

Next week, Amy Schumer takes over. Then, on the 17th, take note — Tracy Morgan makes his return!