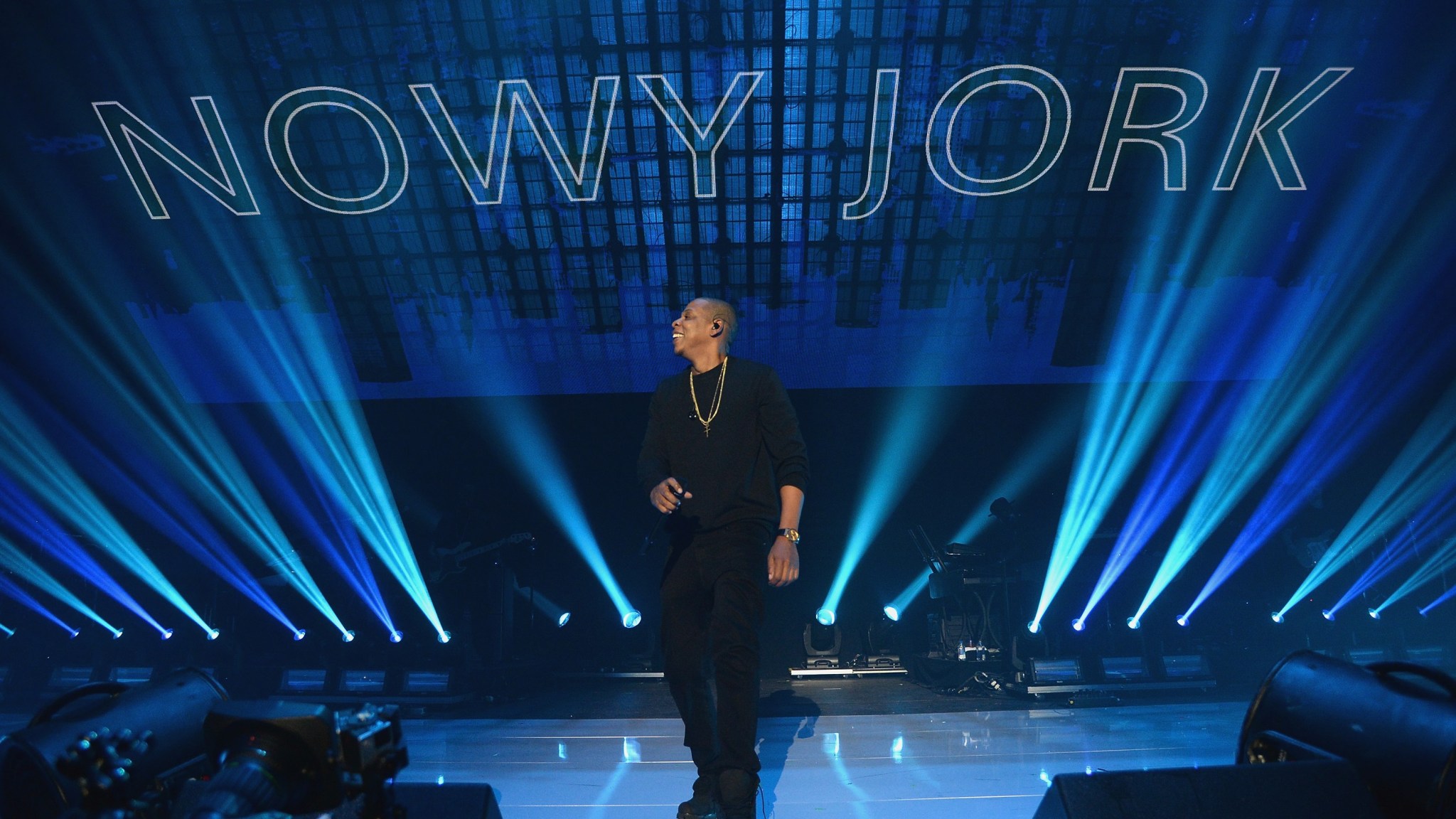 “Rick Ross, Black Market,” read a sign next to it, smaller, white, and modest. “Coming December 21!”

Tuesday evening in Brooklyn, it was clear which long-running spiritual force was winning. Last night, in his latest salvo toward relevance for his punch-line-magnet streaming service, Jay Z threw himself a big, dumb, fun rap party called Tidal X: 10/20.1 At some point, presumably, he’ll run out of favors to call in. But this was not that point. Last night’s odd lineup ripped through spot appearances from Hov plus Nas, Usher, Meek Mill, Rick Ross, Lil Wayne, Nicki Minaj, and the Good Lady Herself. “Beyoncé Wasn’t Built in a Day,” one reveler’s T-shirt read, but she had at least 10 minutes to help out her man’s flailing small business.

The first part of the night apparently featured performances from lesser Tidal Universe All-Stars like Alessia Cara, Indochine, and Thomas Rhett. I say “apparently” because, being the experienced reporter I am, I spent that time across the street at Tony Roma’s enjoying a plate of delicious buffalo tenders. Eventually, walking into Barclays and attempting to reach my seat, I ran smack into a Maybach Music Group clusterfuck.

A small platform had been set up in the middle of the floor seating, and Meek Mill was making his way there from the main stage. Waiting for him patiently were his pals French Montana, DJ Khaled, and the aforementioned Ricky Ross. The encircled fans creating a kessel around the stage wasted no time diving into this sudden abundance: Mean-mugging selfies were being snapped with the greatest of ease. One young woman excitedly hailed her boyfriend, making his way back to their seats from a snack run. He came hurrying in, a precarious plate of cheesecake in hand, pausing not for one second, nor putting down the cheesecake, before a series of [fire emoji] Snapchat transmissions. 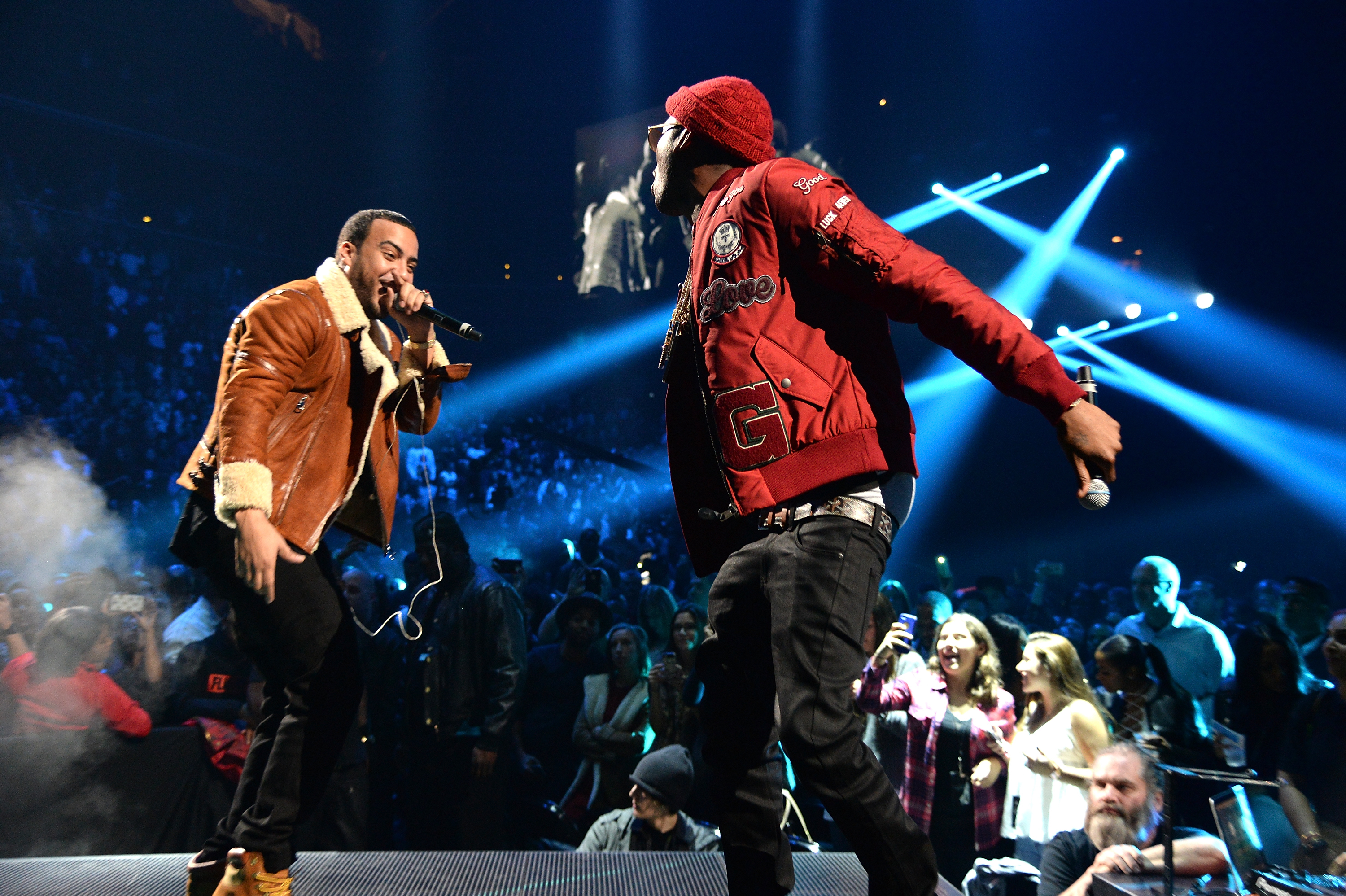 The MMG crew was spirited and resourceful, bellowing through its hits of near-yesteryear. “These motherfuckers mad that I’m icy!” Ross roared, and it was good. “Staaaay scheeeemin,” Montana crooned, and it was funny: “Stay Schemin’” was the same song Drake used to take subliminal shots at his one-time enemy, Common. Now, Drake’s au courant opposition Meek Mill was swinging along to the jam. It was a nice reminder that this is hip-hop, where alliances shift like Oceania, Eurasia, and Eastasia.

Looking around the arena during the break provided the usual strange sights for this kind of corporate-sponsor-riddled hodgepodge event. Pantsuited businesswomen with lanyarded placards hanging near dreadlocked Japanese twentysomethings in Supreme. Older men with younger ladies pulling them up by the wrists to reluctantly dance. Tyson Beckford, standing next to a jean-shorted young lady. Michael Strahan, standing next to an ancient white man.

In between, DJ Cipha Sounds spun and harangued with joy. “Y’all sounding like the new Brooklyn,” he shouted, “with the bakeries and the unicycles and the weird mustaches! Where the old Brooklyn at?!” And then he dropped “Hypnotize” to great delight. Later: “Put your arms around your best friend!”

Usher and Nas came out to debut a political number called “Chains”; behind them on the giant screen, literal chains appeared to smash into figurative pieces. Nas was really on his Nas shit: “Land of opportunity,” he said. “Tried to ruin me!” A pause. “Stop police murder!” A third performer, Bibi Bourelly — the writer of “Bitch Better Have My Money” — was up there with them. Instantly, she became Obama’s favorite Bibi.

In the aisle, someone predicted “Time for the boss man.” Not yet. First, it was Fabolous, ultimate NYC rap cockroach. He came out looking like he was determined that nowhere on the Internet would it be said he was dressed like an extra from Blade; in all-black-leather down to the black leather Ewing jersey, our man Fabo looked just like Blade himself. He did “Brooklyn,” a very good, largely forgotten banger from 2007. 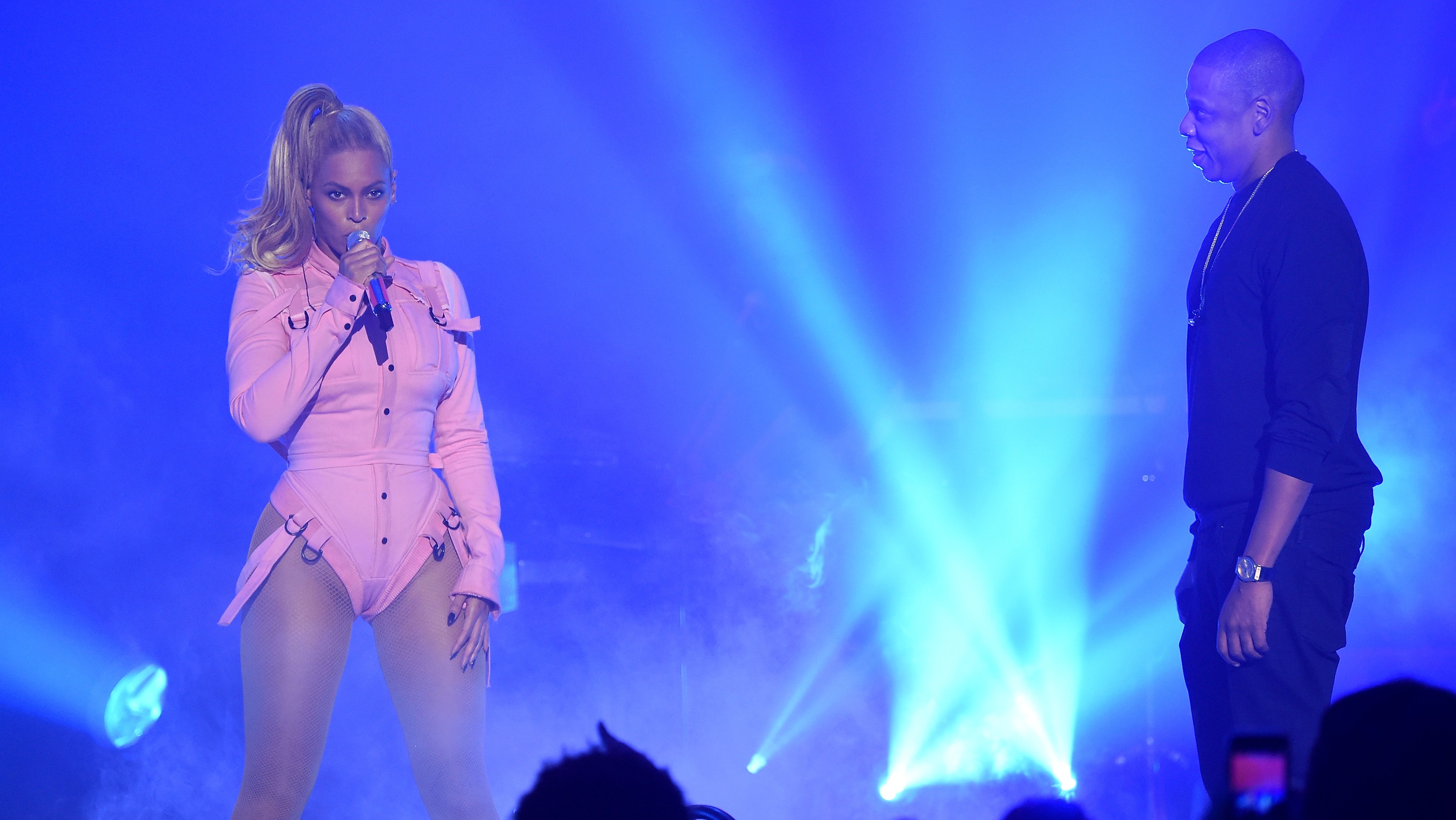 Then Jay popped up to do his featured verse on that track.2 In 2007, Jay was freshly unretired, and he was picking his spots to remind us he could still rap hard. It was a liminal moment for the man. These days feel like one, too.

Jay’s latter-day successes are corny but undeniable: He’d finish the night, hugely, with the saccharine “Empire State of Mind.” But now it seems the music matters less than does the proving of his bona fides as a seer. He’s 45 years old, and he’s got decades before he goes anywhere. For right now, he really does need Tidal to succeed. And as long as that’s true, he’ll keep trotting out all manner of enticements.

The thing about last night was that it was, for the most part, huge in a muted way. Everything went according to plan (well, the scheduled Prince didn’t show), and each star appearance lured out the oohs and ahhs. Oh, hello, Wayne! Hey there, Nicki Minaj! Good of you guys to come!

I’m not being completely fair. In limited minutes, Beyoncé came out and absolutely murdered, and did so selflessly. On “Feeling Myself,” she elevated Nicki’s game just by standing with her, back to back, doing mad face. On “Holy Grail,” she did the hook, beautifully: “This is my favorite song to sing with my husband!” Then she played Jay’s hype man, insanely. She got on her knees, she twirled her hair; without a mic, she rapped every word. Plus, Jay did his early-career scorcher “Where I’m From,” and I will love him forever for that.

But there wasn’t much in the way of strange thrill.

The nexus of rap power resides wherever Drake and his pal Future are right now. Kanye’s always lurking. But who was Jay supposed to bring out to indicate that he understands the music right now? Chance the Rapper? Young Thug? I’m genuinely asking. Instead, we had Rozay reappearing, this time shirtless — his breasts still flapping impressively, but his once happily rotund figure a bit too shrunken to be fully imposing. “I love you my n​-​-​-​-,” he told his friend Jay. “Tidal foreeeveeerr.” Um, OK. Sure.