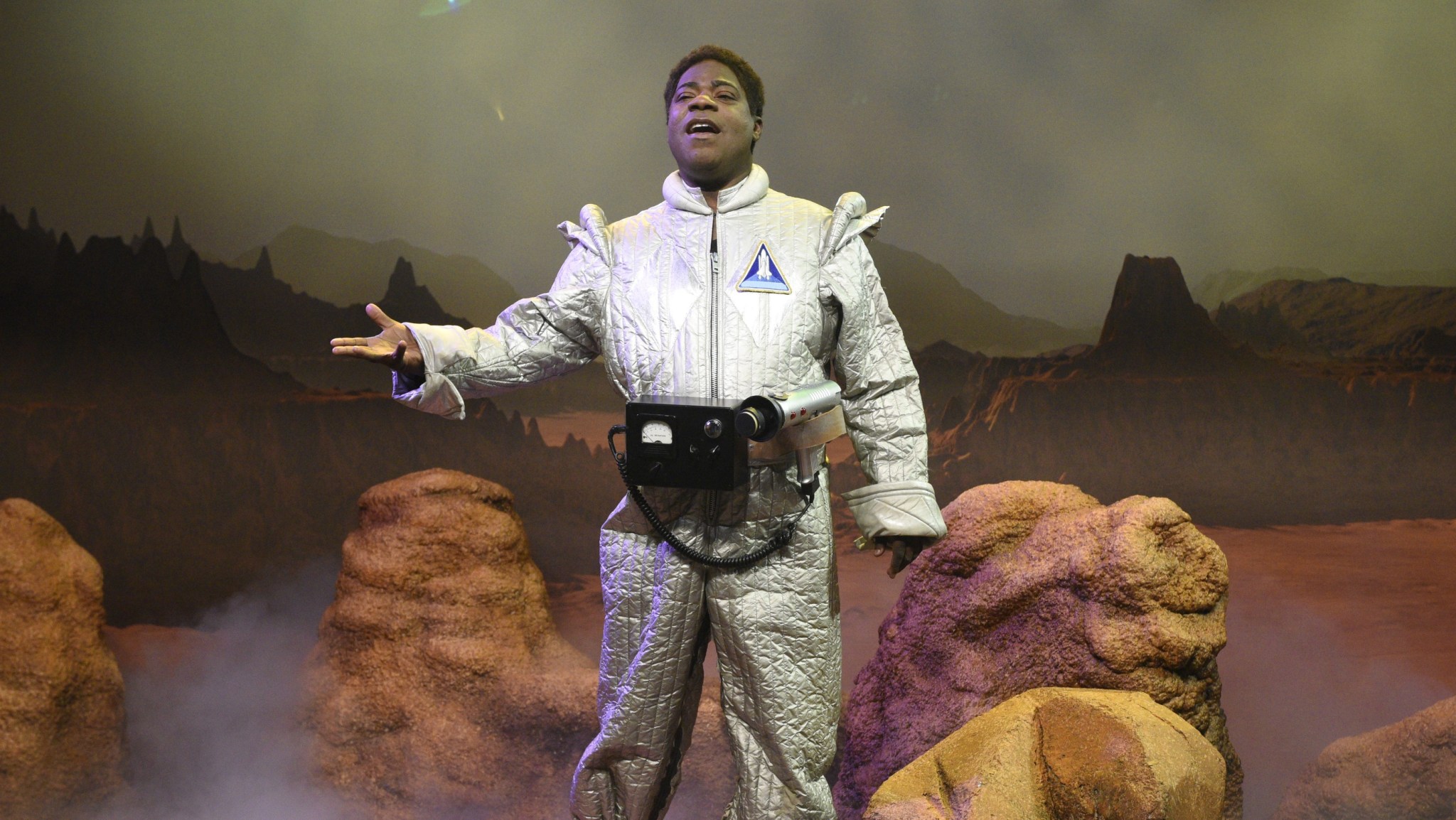 In 2007, four years after leaving the show, Tracy Morgan provided us with a great Saturday Night Live moment. “Laughing and all that dumb shit,” Morgan told Penthouse. “He wouldn’t mess with me because I didn’t fucking play that shit. That’s taking all the attention off of everybody else and putting it on you, like, ‘Oh, look at me, I’m the cute one.’ I told him not to do that shit in my sketches, so he never did.”

The “he” in question was Jimmy Fallon, current boy-prince of late night, and the feud was patched up sooner rather than later. But the spirit of the moment would last forever. And that spirit was born of Tracy Morgan’s bellowing id: the very same id that has declared, repeatedly, in full and scratchy throat, its intentions to take all the women in the building — and all the cornbread, too — behind a middle school and get ’em pregnant.

In the summer of 2014 on the New Jersey turnpike, a sleep-deprived Walmart truck driver crashed into a limousine that was transporting Morgan and a group of friends and coworkers back from a comedy show in Delaware. The crash nearly killed Morgan and left him in a coma for days. It also took the life of his friend and fellow comedian James “Jimmy Mack” McNair. It’d be easy enough to render the Tracy Morgan comeback story as simple and pure uplift. But this is still a profound tragedy.

That said: Seeing Morgan back on the SNL stage Saturday night was a rare and special treat. His cockeyed deadpan, his raw bluster, his fearless absurdity; Morgan was always a force and a cause and a defender against bullshit. Seeing him indulge in some well-earned sentimentality for a change was nice. He thanked the crowd, he thanked his “comedy family,” he said he was happy to be “home.” And he also, yes, got to make some monologue jokes. “Do I have 100 percent mental capacity? [Pause.] The truth is I never did. I might even be a few points higher now!”

From there, we got a regular callback of greatest Tracy hits. It was understandably a bit shaggy in delivery, and perhaps a bit obvious, but, like, how you gon’ be mad on vacation? During the monologue we got a 30 Rock interlude, with Kenneth and Jenna and Lemon and Donaghy all accounted for, the latter there to explain that Tracy has hurt himself attempting to “non-artificially inseminate his box jellyfish.”

Brian Fellow, peeved animal lover, came back hot: “Approximately, on average, how many cigarettes does this beaver smoke?” A huge shout-out to the audaciousness of the SNL animal-handling team on that one: They brought a real, giant-ass camel on stage! Morgan, ad-libbing as said desert beast loitered in the way of the camera: “I can’t see, camel!”

Later, Woodrow the Homeless Man returned to croon of doo-doo pies, and Astronaut Jones channeled Matt Damon and got himself stuck on Mars. Thankfully, Martian Queen Demi Lovato (the night’s musical guest) was there to provide him warmth and shelter. Mostly, though, Jones just wanted her to “let me see it clap.”

In the original material, Morgan worked some small wonders. His delivery was never the sharpest, but that wasn’t really his appeal. It was his willingness and ability to go unhinged that made us love him. That meant that a Family Feud sketch wasn’t just an excuse for SNL to point out that it finally has enough black cast members for a whole family. It was also a chance for a family-deserting Morgan to scream lovely things at his daughter, such as, “It’s not even a real strip club, it’s a car wash with a room in the back!”

As Bernard the Clock Maker joined a forced-joyous old-timey Bavarian-countryside musical, he brought some integrity in the form of truth: “I wrote a song about titties. Anyone wanna hear it?” As an ominous man in a bar who actually just wants to tango in his ballerina slippers, he brought his perfect fake-breaking-into-weeping voice. And in a beautiful 10-to-1 sketch, he cohosted a show with Kenan called Yo! Where Jackie Chan at Right Now?

The premise was as stated; the roll call of guest appearances — Chris Tucker, Steven Seagal, Young Osama bin Laden — was impressive. And it was all the proof you needed that Morgan — 12 years and one life-changing accident removed from Studio 8H — could sign a cast member contract right now and improve SNL dramatically. “People need to respect this show. We won a Peabody!”

At the goodbyes, his wife and young daughter by his side, Morgan once again got gushy. He waved and hugged and, unabashed, he told Lorne Michaels, “I love you like I love my daddy.” Michaels didn’t come out, didn’t share the moment. This was Tracy’s night.

‘Star Wars’ Lightning Round: The Reveal of the Final ‘Force Awakens’ Poster