How Many Dead Mobsters Would You Trade for a Puppy? On the Moral Calculus of ‘John Wick’ 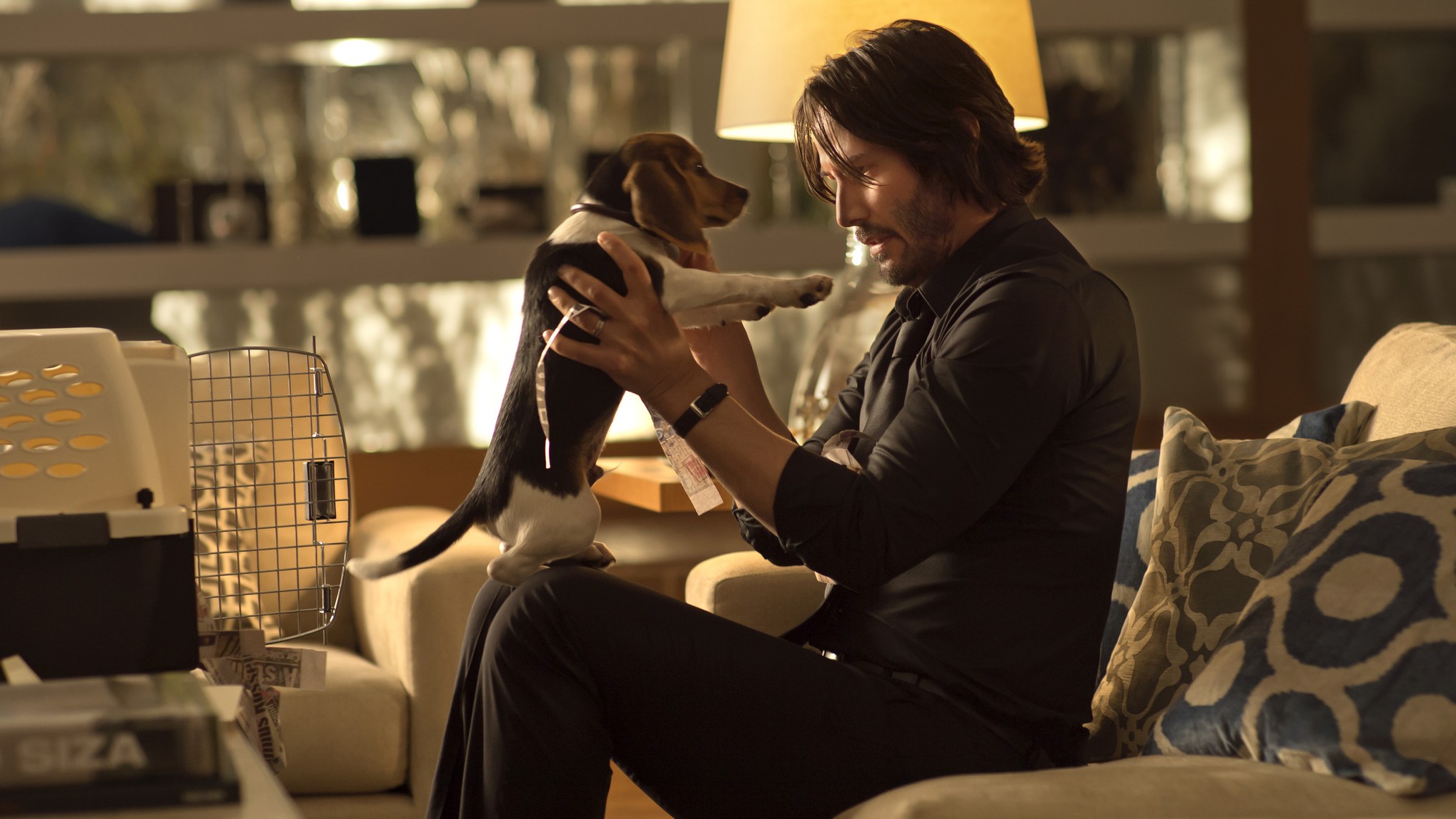 Let’s be frank. John Wick is not a “good” movie in the sense that it has subtly shaded characters, well-founded plot, or sparkling dialogue — but it’s one hell of a good time. Watching Keanu’s Wick juke, jump, and shoot is closer to cheering on a great session of the classic N64 Goldeneye or enduring the newest quadruple, reverse hyper-loop roller coaster at Six Flags: just add mechanical jostling to those theater seats and Keanu would blow Star Tours out of the water. But if you bother to scratch the shiny, neon club-table surface with even the slightest pressure of casual thought, the paint doesn’t just chip, the film’s whole frame crumples from the impact. Make no mistake: You’re applauding a lethal assassin’s psychotic, nihilistic breakdown as he goes on a very public mass-murder spree in the heart of America’s biggest city.

Sure, the corpses are almost exclusively tat-infested Russians who, according to contemporary movie logic, are cinematically engineered for used-bullet storage. But still. They talk. They bargain. In between coke binges and prostitutes, they might even write a haiku or two. Hell, the main villain tries to call Keanu at the start to make it all right, because this is his son he’s trying to save. (And it’s Theon Greyjoy, no less.) We feel sorry for the same dude on Game of Thrones when his other callous screen daddy leaves him to rot as a Torture-Me Elmo. But there is no rational, even respectful, discourse to be had. Literally, Keanu says nothing to these entreaties, which says it all: John Wick’s grief must be sated with blood. The East River will run red. Because these guys did the one thing that cannot be forgiven, the only action that justifies death on a scale that’d make a drug cartel blush.

They murdered his dog.

I come not to mock, but to marvel. Because it works: We are there 110 percent for everything that happens post-caninecide — the gallons of blood, the hand guns inserted in faces like meat thermometers, the slaughter of so many Russian mobsters it will have dire consequences for the Brooklyn economy. It excuses the blank stares and wax-paper-thin dialogue, the quips that are basically just reaction shots with a deadpan “Oh” thrown in for comic emphasis. Yes, it is beautiful, artfully choreographed, and slicker than an oil spill, but Michael Bay is a Zen master at polishing emptiness and he never gets an 86 percent on the ol’ Tomatometer. Again, I’m telling you, I was totally onboard, and not just ’cause it’s good to see Neo back in black. I morally sanctioned Wick’s biblical wrath. The nuanced, hyper-aware 21st-century self I pretend to be shattered like so many Slavic crania; and for more than 100 minutes, I devolved to an Old Testament, lion-baiting son of a bitch.

The rule is, of course, not new to storytelling. It’s a variant on the old screenwriting adage that you have your main character do something nice (like rescue an animal) somewhere in the first 15 pages and your audience will forgive anything. Save the Cat — or in this case, Avenge the Puppy. After all, Taken has built a trilogy on Liam Neeson’s Odyssean quest for parental vengeance. (And Tarantino will tell you just how foundational the revenge plot is to cinema high and low.) But at least in Taken, we’re riffing on a parent’s very real and understandable protective instinct. Sure, it’s a fortysomething’s fantasy, but one built on a solid grain of truth: Any parent would go through an infinite mountain of Eurotrash thugs to save his or her baby. What’s remarkable in John Wick is that the moral equation has been reduced to its basest terms. There’s no one to be rescued, no mitigating purpose to the carnage. It’s simple: One dead pet is worth exactly one bajillion dead bad guys. That is a mathematical truth that transcends reasoning. We know it in our gut, and that’s why John Wick works.

The puppy is a powerful variable because it’s so perfectly calibrated for the experience of mass-market moviegoing. A baby, for example, would be too much; I cringe just thinking of the scene in Game of Thrones in which an infant is exposed to the snow. I actually felt relief when the White Walker “rescued” it for zombification. But a dog … As we push in on a bloody Keanu cradling his limp pet, and our rage boils, the implicit question becomes, What doesn’t this sanction? How far is too far when it comes to puppy-inspired vengeance? At what sum of human suffering would Wick have lost us: letting a pack of pit bulls play chew toy with the gangsters’ delicate parts? Making a doghouse out of the accumulated corpses? Grinding them up, Purina-style, and donating the chow to a rescue shelter? The most amazing thing is that after watching John Wick turn lower Manhattan into the killing fields, I still do not know. A lucrative franchise will probably be squeezed out of finding out how much you can avenge one dead, fluffy beagle.

You could pass a lifetime exploring the implications of all this. What if we applied Kant’s categorical imperative: If I kill a dog, is it then essentially my duty to be punished (as well as that of any comrade who dares help me)? What does it say that I enjoyed John Wick as much as I did: Is my thirst for puppy-snuffer blood essentially just Orwell’s Two Minutes Hate made palatable for modern society? These are questions that will now keep me up at night. John Wick has helped me stumble across one of the fundamental, irrational boundaries of my moral universe. And it barks adorably before leaving a cute, steamy pile on your lawn.