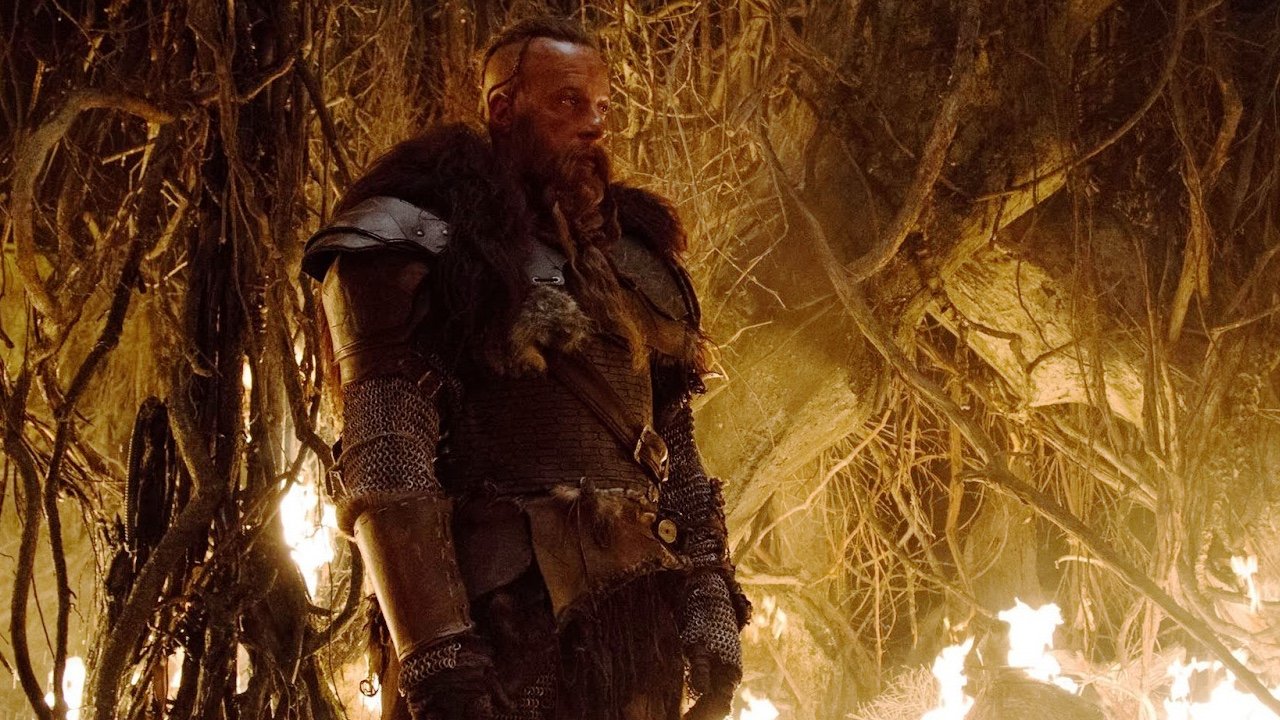 In 2002’s xXx, Vin Diesel’s extreme athlete turned superspy alter ego Xander Cage had the word MELKOR tattooed across his lower abdomen. Melkor was the name of a Lucifer-like fallen-angel figure in J.R.R. Tolkien’s The Silmarillion; it was also the name that Diesel gave his all-time favorite Dungeons & Dragons player-character, a dark elf who specialized in — wait for it — hunting witches. Diesel may still be built like the nightclub bouncer he once was, but deep down, in the android’s dungeon of his heart, he’s a huge nerd, with a nerd’s passion for encyclopedically detailed fictional universes. His Vinnermost desires came through the clearest in 2004’s The Chronicles of Riddick, a dumb but deeply felt attempt to expand the Pitch Black universe into a Star Wars or Lord of the Rings–style mega-mythology involving an interstellar death cult called the Necromongers and their quest for an interdimensional Valhalla called the Underverse. Nobody liked it, and 2013’s back-to-badass-basics sequel Riddick dialed the world-building way down, but it’s clear that Diesel still wants a sprawling multi-film fantasy franchise to call his own, and that voicing a tree with a three-word vocabulary in endless Guardians of the Galaxy sequels isn’t going to scratch that itch.

Hence The Last Witch Hunter, a feature film that feels like a longish TV pilot, or like the prequel to the Witch Hunter sequel that Diesel told his Facebook fans the studio was “already commencing” back in June. (They might as well have called this one The Last Witch Hunter 1.) Breck Eisner, of the California Eisners, directs; Diesel stars as Kaulder, seen here first as a 13th-century warrior with a braided Battlefield Earth beard and a Macklemore Mohawk, leading his fellow Knights of the Axe and Cross through a snowy wasteland to put the hurt on a witch they blame for the Black Plague. The Witch Queen (Julie Engelbrecht) has a Gigeresque ponytail of spinal-column bones and lives in a tree that pulses with malevolent life. Kaulder sets his sword magickally afire and runs her through, but before she dies, she curses him with immortality. Eight hundred years later, Kaulder has become one of those true New Yorkers who takes pride in knowing what everything used to be, except in this case he remembers when the Duane Reade on the corner was a patch of cornfield. 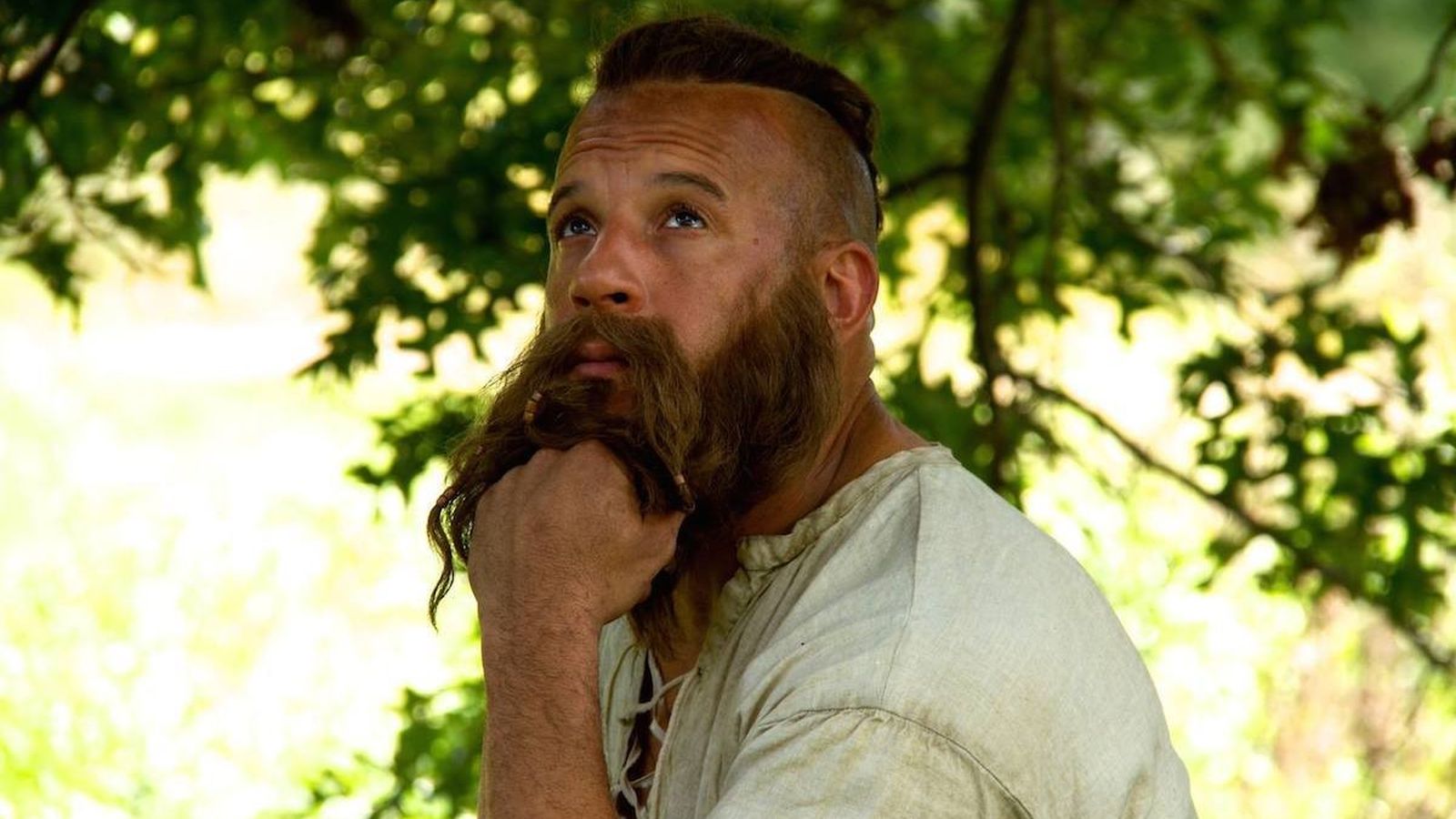 Kaulder has a cool car and a wardrobe of exclusively open-necked shirts and has sex with stewardesses in an austere-yet-groovy bachelor pad — the walls are marble; it’s like he lives in a bank — near St. Patrick’s Cathedral, with a pool table and a secret closet full of witch-killing guns. He’s a little bit John Constantine and a lot bit Bruce Wayne, and his Alfred is — well, it’s Michael Caine playing Alfred again, basically, although in the script he’s Dolan, the 36th in a long line of priests sworn to service as Kaulder’s witch-hunting sidekick. They’ve been together long enough that Kaulder addresses him as kid; when they meet to toast Dolan’s retirement, Kaulder says, “We took out some nasty covens.” When Dolan turns up dead and Kaulder finds SURRENDER DOROTHY–ish witch graffiti burned into the walls of his room, things get, y’know, personal.

How much more do you really need to know before deciding if this is a broomstick you want to hop on to? It’s Vin Diesel as a supernatural cop with an inexperienced, audience-surrogate-question-asking partner (Elijah Wood). He shakes down witches and warlocks for answers regarding Dolan’s death and discovers a conspiracy to resurrect the Witch Queen. He finds an unlikely ally in Chloe (Rose Leslie, Game of Thrones’s Ygritte), a witch who’s the proprietor of a magic-potion speakeasy and has the (narratively convenient) power to project herself into Kaulder’s past-life flashbacks and yank him back to reality. Sometimes he mansplains witch history to Chloe so we can learn it too. Sometimes he says things like “Salem was a mistake — those women were innocent,” as if daring us to laugh. This is as close as the movie comes to acknowledging that actual witch-hunting was a form of violent church-sanctioned misogyny; I concede that complaining about this is like complaining that Furious 7 was insufficiently worried about peak oil.

You get the feeling that binders full of backstory were generated as this script took shape, and that Diesel dreams of squeezing that material for all the sequels and prequels and graphic novels and video games it’s worth, until every minute of Kaulder’s 800-year career is accounted for, from his first cigarette to his last shrieking-crone impalement. But the actual movie in front of us feels thin; it arranges borrowed ideas into a legitimately interesting world and then skates across its surface. I liked (and would have liked more of) the movie’s vision of a modern Manhattan where witches live as a secret sybarite subculture among unsuspecting humans, like the beatnik sorcerers from Bell Book and Candle (1958, directed by Richard Quine, with Kim Novak casting a love spell on Jimmy Stewart the same year as Vertigo; go watch it, it’s great). But that’s me; I’m the type of person who thought an extra 30 minutes of explication regarding the assassin hotel would have improved John Wick. Bell Book and Candle meets John Wick is a version of this story I could have really gotten behind. The Last Witch Hunter still represents an opportunity to enjoy Diesel being Diesel — the borderline-camp solemnity he brings to even the sandbaggiest line of dialogue is a trash-redeeming force as powerful as the Rock’s arched eyebrow. It’s still trash, though.