A Riddick Primer: Catching You Up on Vin Diesel's Three-Part Space Opus 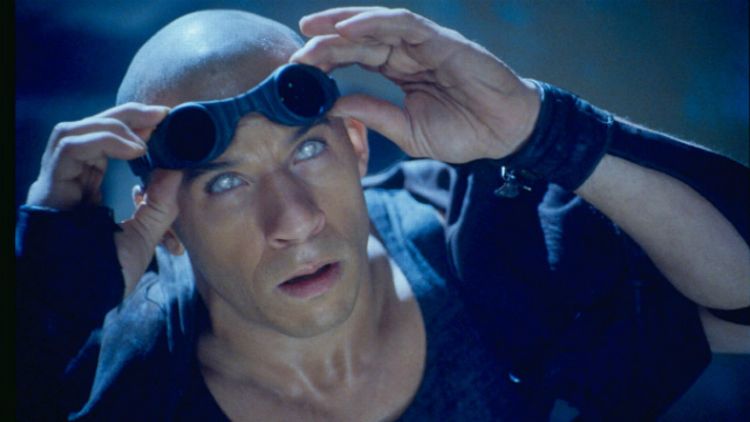 No one loves intergalactic super-badass Riddick as much as Vin Diesel loves Riddick. This is my favorite thing about the Riddick movies. Not since the Rocky series has a franchise’s refusal to die seemed this much like a pure expression of its lead actor’s indomitable will. The first Riddick film, 2000’s modestly budgeted sci-fi/survival-horror thriller Pitch Black, put Diesel on the map as an action star. He went on to launch his career as a human tentpole with the first Fast and the Furious one year later. Most actors wouldn’t have looked back. But Diesel isn’t most actors. The heart of an inveterate fantasy geek beats under his paving-stone pecs, and geeks don’t think in one-offs. They dream of sagas, of Holy Trilogies. Diesel and his copilot, writer/director David Twohy, weren’t done with Riddick yet. They reportedly delivered the script for 2004’s The Chronicles of Riddick to the studio accompanied by locked leather binders representing sequels to come.

Chronicles made $57 million against a $105 million budget, so Universal got out of the Riddick business and those movies were never made. Diesel agreed to do a brief cameo in 2006’s otherwise-Vinless Fast and the Furious: Tokyo Drift in exchange for the rights to the character and future sequels. It probably seemed like a magic-beans deal to the studio, but the third Riddick film finally arrives in theaters this week, a little more than 13 years after the first one. It’s smaller, independently financed, closer to the no-frills action of Pitch Black than the sprawling, overbaked space opera of Chronicles. It’s just called Riddick, like a back-to-basics solo album. Its chief reference point was Robert Redford’s Jeremiah Johnson, not the oeuvre of George Lucas, although if this one makes enough money, Twohy and Diesel may yet get the chance to crack those binders open and unleash the goofiness within.

At the film’s L.A. premiere, a reportedly “emotional” Diesel told reporters that the Riddick movies are “the story of my life.” I’m going to go ahead and assume he didn’t mean that literally. Diesel was a Manhattan dance-club bouncer who broke into movies after writing, directing, and starring in Multi-Facial, a short film based on his real-life experiences as a struggling actor of mixed race; Riddick is an unrepentant, largely amoral killer from the 27th century who’s broken out of every prison planet in the galaxy. He possesses above-average strength and agility, and has reflective-pupiled eyes that work like night-vision goggles. He has some animalistic qualities, including (a) the ability to remain conscious enough to narrate in voice-over despite being cryogenically asleep, and (b) a certain magnetism that makes Radha Mitchell’s spaceship captain character fall for him a little bit in spite of her better instincts. Riddick is that masculine. He’s so masculine that at one point in Pitch Black we see him shave his head with engine grease and a knife, and then in the next scene his head is stubbly again.

He doesn’t speak a line onscreen until almost 30 minutes into the first movie, but his internal monologue is Frank Miller–esque: Smell the woman. Sweat, boots, tool belt, leather. Basically he’s an uncredited adaptation of Lobo, who became a popular DC Comics antihero in the ’90s despite having been created as a parody of previous antiheroes like Wolverine and the Punisher. Sometimes when Riddick talks in voiceover, he sounds a little like Brock Landers. Like Dirk Diggler’s alter ego, he’s so purely a 12-year-old boy’s idea of a bad motherfucker that the character achieves a kind of idiot transcendence of the clichés he’s sewed from. His first name turns out to be “Richard.”

One reason Richard’s so surly: He started his life in a liquor-store trash bin, nearly strangled by his own umbilical cord. As a result, he tells a Muslim space-pilgrim called the Imam, played by Keith David, “I absolutely believe in God. And I hate the fucker.” The idea that Islam persists 600 years in the future is as close as the movie gets to world-building, and Riddick’s trash-bin anecdote is as close as it gets to backstory. There’s not time for much else. We open with Riddick chained and gagged aboard a spaceship, on his way to face a murder charge. The ship crashes on a desolate planet lit by three suns; when the suns go down, the skies fill with hungry, hammerheaded, and batlike super-predators, and Riddick, for whom nighttime is the right time, grudgingly agrees to help the rest of the survivors fight for their lives. At one point he kills one of the monsters and then announces that it “did not know who it was fuckin’ with,” which seems like a pretty self-evident thing to say about a creature that doesn’t seem to have eyes. At first, when people die, Riddick doesn’t seem to care; later, some other people die, and his face betrays mild consternation. That’s his character arc.

Despite mixed-to-dismissive reviews, Pitch Black made something like $30 million in profit on its $23 million budget, and that combined with Diesel’s post-Furious heat sort of explains how Chronicles of Riddick got the green light. But only sort of. Chronicles opens with an enormous Art Deco spaceship adorned with scowling iron faces launching deadly balls of light into a planet’s atmosphere; until Dame Judi Dench’s voice-over kicks in, it’s unclear if you’re watching the movie or a really, really pretentious CGI-animated production-company logo. That feeling never quite goes away. Dench — Diesel’s favorite actress, he’s said — proceeds to deliver the kind of info-dump narration that got David Lynch’s Dune laughed off movie screens in 1984. We’re introduced to the Necromongers, a militaristic death cult bent on exterminating or subjugating all life in the universe to prepare for rebirth in a dark promised land called the Underverse, which is separated from our world by something called the Threshold, the mere mention of which gets the Necromongers pretty excited.

All the proper names are this generic. There are planets called “Planet 6 of the UV System” and “Helion Prime,” whose chief export is golden iced tea–commercial sunlight. It looks a little like Lando Calrissian’s Cloud City and a little like the fake-outdoors part of a Tunisian-themed casino; the Imam is waiting there. Pitch Black created its alien world with nothing but a patch of Australian outback and some hyper-intense color grading; here the production design, by Stargate’s Holger Gross, is an elaborate and tortured indigestion-dream about Dune and H.R. Giger and the parts of the ’80s Masters of the Universe movie that stole from Jack Kirby’s Fourth World. The whole enterprise feels perfectly, yearningly derivative of other, better sci-fi/fantasy films, and I kind of love that about it — it’s a movie that can’t resist taking every toy out of the toy box. One minute it’s the Conan reboot Diesel never got to make. Then he’s running across rooftops in a cape, like Batman. Then he’s staring off into the distance, brooding and mysterious, shot from below so that his reflective contacts give him a Man Who Fell to Earth quality. Turns out he’s this world’s Han Solo but also its Luke Skywalker, a lost man-child with a Very Special Destiny. He’s one of the last of the Furyans, who the Necromongers exterminated after it was prophesied that a Furyan would one day kill their leader — played by Colm Feore, he says amazing bad-guy lines like “Take him before the quasi-deads!”

So it’s overlong and overstuffed. It has fifth-act problems. It has Karl Urban with a Jared Leto bro-hawk and Thandie Newton playing the Queen of the Necromongers. It has one of the least subtle Refusal of the Call moments in the history of Joseph Campbellian screenwriting: A little girl says, “Riddick, are you going to stop the new monsters now?” and Riddick puts his Jedi hood up and walks away. But it’s also full of odd resonances. Helion Prime is depicted as a vibrantly and almost pointedly multicultural paradise whose capital is the city of “New Mecca”; we’re not specifically told that the Imam’s faith represents their mainstream, but after the Necromongers (mostly whiter-than-white under their armor, except for Newton) begin their invasion, determined to make converts or corpses, the movie plays like a sneaky Iraq War commentary, with Diesel as the principled outsider drawn into the role of lone-man insurgency. Writing in Bad Subjects in 2004, Tomasz Kitlinski and Joe Lockard called Chronicles “a study in anti-Bush culture… a film of opposition to the civilizational claims of empires, to the demand to submit to an integrationist globalism.”

And then Riddick tells a guy “I’ll kill you with my teacup” and then does exactly that! There’s something quixotic and silly about contriving a vast sci-fi universe and its various underverses just to create excuses for a goggled Diesel to turn to camera and make his glowering you-shouldn’t-have-done-that face while lit in orange like Cam’ron on the cover of Confessions of Fire. But there’s also something brave and touching about how thoroughly this movie believes in Riddick and his world, how high it gets on its own supply of boldly borrowed ideas. There are Riddick-verse quasi-deadheads out there who’ll insist that Pitch Black is a marvel of economy and Chronicles is textbook overreach, and who’ve already hailed the bare-bones Riddick as a welcome return to form. Fine. But part of me still wants to see whatever prog-rock-gatefold-cover ridiculousness Twohy had in mind for the second and third Chronicles sequels, even if he can only afford to make them as Syfy original movies starring Chris Daughtry (or cartoons, like 2004’s great Chronicles of Riddick: Dark Fury, animated by Æon Flux creator Peter Chung). We’ve come further with Riddick than anyone except maybe Diesel would have expected 13 years ago; we can’t stop here at the threshold. No sleep till the Underverse.