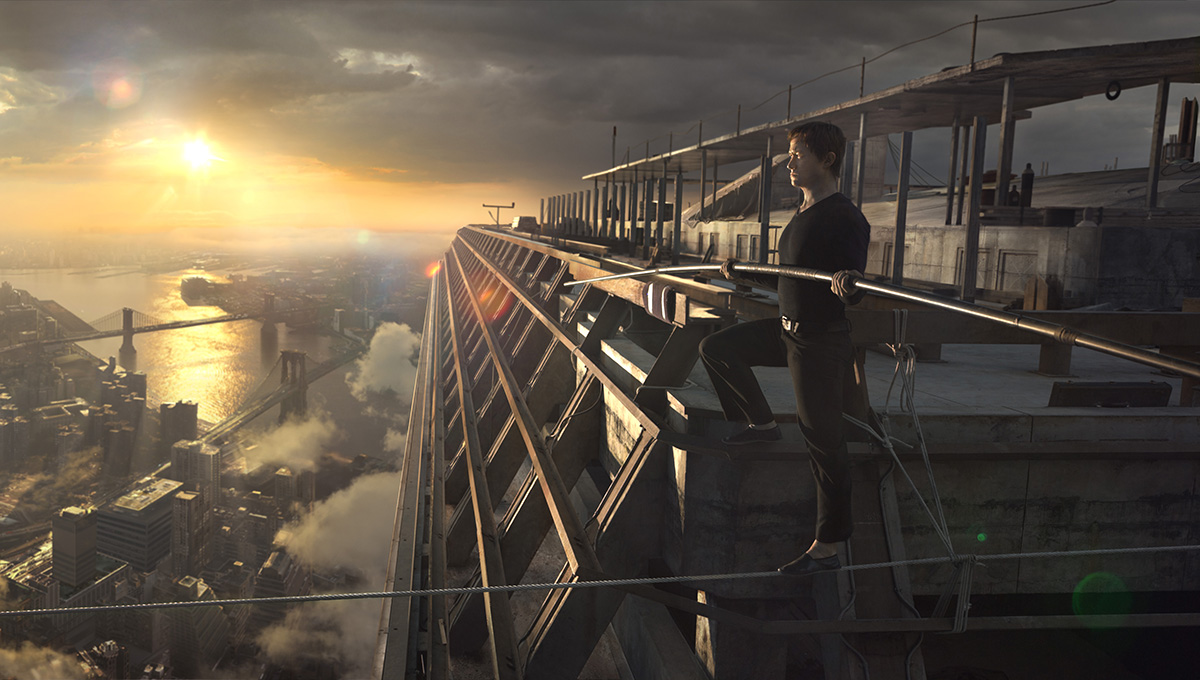 In Robert Zemeckis’s The Walk, a shaggy Dumb & Dumber wig blocks most of Joseph Gordon-Levitt’s distinctive forehead and all of his access to irony. As the French aerialist Philippe Petit, who wire-walked across the 140-foot gap between the Twin Towers of the not-yet-completed World Trade Center one morning in August 1974, Gordon-Levitt gives a remarkable physical performance. He also slings more ham and cheese than a fleet of croque monsieur trucks. He juggles, rides a unicycle, wears a lot of black turtlenecks, produces top hats out of thin air and gum balls out of children’s ears, woos his folk-singing love interest Annie (Charlotte Le Bon) using glass-box pantomime, and narrates his own biopic in a cloying Ah, ze Eiffel Towair accent straight out of The AristoCats. He makes Johnny Depp in Benny & Joon look like Johnny Depp in Black Mass. He is, how do you say, le worst, and if you’re anything like me, you will actively wish to be rid of him, right up until he steps off the roof of the South Tower and onto a thin steel cable, at which time you’ll begin praying for his health and safety even if you already know how the story ends. For at least the duration of the 25-minute wire sequence, The Walk is a breathless, exhilarating moviegoing experience. It’s just not much of a movie.

In James Marsh’s Oscar-winning 2008 documentary Man on Wire, the real Petit came off like a hyperactive cross between Michel Gondry and Johnny Rotten, and the contagiousness of his intensity was self-explanatory. The documentary doesn’t mention the 9/11 attacks at all, but its deliberate omission of those events still felt like a response to them. By paralleling the World Trade Center’s early “life” with Petit’s and positing the walk as a defining moment for both of them, Marsh ascribes to a temporal artistic gesture the same lasting power as an irrevocable act of mass destruction. It’s as if by walking that wire, Petit stepped out of time to rebuke the primacy of an event that hadn’t happened yet and, by extension, the notion that history can be written only in blood. Zemeckis’s film lands on the same notion, but can’t resist winking at it in dialogue. “Perhaps you brought them to life, gave them a soul,” someone suggests to Petit as they look up at the Twin Towers after the fact. By that point I’d started to wonder if The Walk was secretly their biopic, contriving a happy ending for its subject by knowing when to look away. It shows us a dark falling shape turning out to be some insane Frenchman’s lost sweater, and people looking to the sky in delight, and says Never forget. 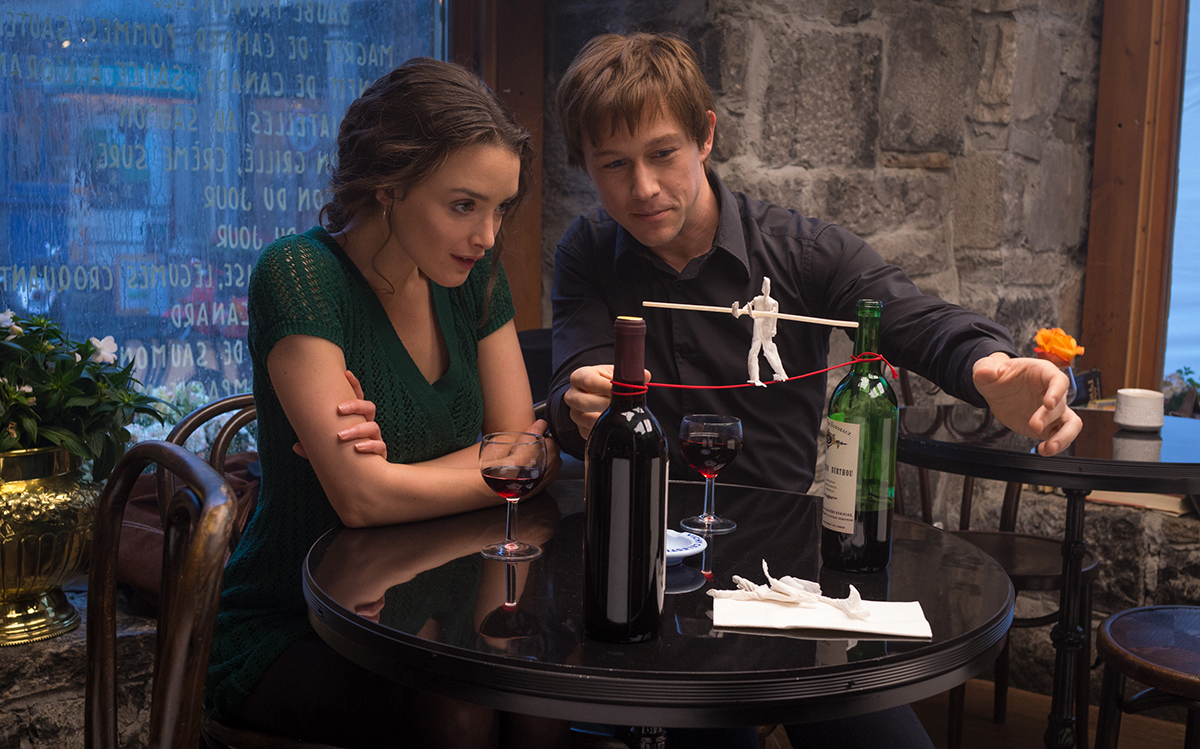 Zemeckis has streamlined Petit’s biography, so all that’s left is a mythic tale about an artist with a crazy dream. He spends more time on the man’s early life than Marsh did, but you can feel his nervousness about the parts of this story that don’t take place in midair. The first act unfolds in slow motion, fast motion, CGI-Botoxed Big Fish flashbacks, and black-and-white with fairy-tale dabs of color. Clown-fear trigger warning: Petit trips and falls and comes up juggling. Zemeckis is afraid we’ll get bored, which is not an irrational fear — the superhero-origin scenes involving the irascible high-wire artist Papa Rudy (Ben Kingsley) showing Petit the (literal) ropes are brief but not brief enough. Papa Rudy forces Petit to rehearse the body-language flourishes by which wire walkers give “an order to the audience to pay attention”; Zemeckis accomplishes something similar during these scenes by using 3-D to fling the occasional loose prop directly at our eyeholes every so often.

In his apprenticeship phase, Petit courts Annie and bonds with his first accomplice, photographer Jean-Louis (Clement Sibony). Their exchange of platitudes — “All artists are anarchists, don’t you agree?” — is the closest thing the movie offers to a philosophical motivation for what’s to come. There is no why, Petit will tell reporters later on, and Zemeckis mostly takes him at his word. Petit turns out to be a perfect Hollywood-biopic protagonist, in that he appears to make all of his major life choices based on the kind of conveniently timed omens that invariably show up to divert people’s lives in movies like this one. Paging through a magazine in a dentist’s-office waiting room, he sees a picture of the World Trade Center. It’s a sign! When he encounters the Towers in person and realizes they’re both as smooth-skinned as a Terminator and taller than they look in photographs, he despairs briefly, wondering how he’ll pull off the stunt he’s taken to calling “le coup” — until a painter emerges from the stairwell, mutters a Howyadoin’, and leaves open a door that Petit can easily slip through to begin exploring the building. It’s a sign!

You can feel the movie breathe a sigh of relief once it lands in Manhattan. Zemeckis cranks the on-the-nose oldies — this time it’s Sly and the Family Stone’s “I Want to Take You Higher,” as metatextual an elbow in the ribs as “Feelin’ Alright” was for Denzel’s coke-snorting scenes in Flight — and the story eases onto a traditional heist-movie track, albeit one where the only thing Petit plans to steal is the city’s heart. But first he’s got to case the joint — 14 years after 9/11, we are apparently ready as a society for a montage in which foreign spies suss out the security flaws of the World Trade Center while jazzy caper music plays — and enlist more coconspirators. His Stateside crew includes James Badge Dale as a wisecracking electronics expert and Steve Valentine as New York State Insurance Department researcher and deus ex mustachio N. Barry Greenhouse, who happens to have an office on the 82nd floor of Tower 2. (It’s a sign!)

This is a comfortably clichéd vision of old New York — the cocky, boisterous city of Tootsie and Ghostbusters and the first Superman, the kind of place where a customs agent, upon being told precisely what Petit plans to do with his suitcase full of ropes and pulleys, snorts “Good luck!” and waves him through. It’s also a metropolis where you could apparently throw a rock in 1974 and hit someone eager to help a strange Frenchman risk life, limb, and imprisonment in the name of high-wire performance art. It’s a fun stretch of the film, and the ease with which Petit recruits his Stateside crew is a pretty good joke — but it’s also a thin one, because Gordon-Levitt’s impish, slightly pompous Petit, despite repeatedly proclaiming himself mad and crazy, is nowhere near as magnetic as the plot needs him to be. And there’s barely a clue in the script about who most of his American sidekicks are as people, let alone why they’re so into doing this, or why they stick around once Petit begins displaying signs of cracking under pressure. (Annie is similarly underdeveloped; Le Bon’s a pistol in her early scenes but can do only so much once she’s sidelined into the role of Obsessed Guy’s Concerned Ladyfriend Who Says Things Like “You Should Eat.”)

For what it’s worth, the third act is a genuine tour de force that nearly redeems everything that’s preceded it. Gordon-Levitt’s chipper explanatory voice-over saps some of the tension from key moments that might have benefited from our forgetting that he lived to tell the tale. But from the minute Petit and his team descend the ramp to the World Trade Center’s parking garage, the movie becomes an expertly calibrated palm-sweat machine. There are security guards to hide from and stubborn cables to be rigged before the construction crew clocks in — and this being the roof of an unfinished 110-story building, perils abound even before tightrope-walking enters the equation.

And finally there’s the walk itself, in all its simultaneous wonder and terror. Chances are you’ve seen a hundred costumed heroes leap from roof to roof in hundreds of movies, to the point that it’s like watching a pedestrian hurdle a puddle when it happens. It’s never been like this. What Man on Wire did with black-and-white stills and Erik Satie’s “Gymnopedie No. 1,” Zemeckis does with 3-D, CGI, and broad-stroke magic is happening Alan Silvestri cues. And yet it’s the one moment in the film when more really is more. The 3-D makes us a participant rather than an observer, turning the distance between the buildings — and between the buildings and the ground — into a physical space, the stage for a lucid dream. Zemeckis wants to induce vertigo, to trick the body as well as the eye. It works; it’s unnerving, and preview audiences have puked. But it also lets us share in the peace Petit finds up there on that wire. We’ve been delivered by thrill-ride technology to a moment of otherworldly calm.