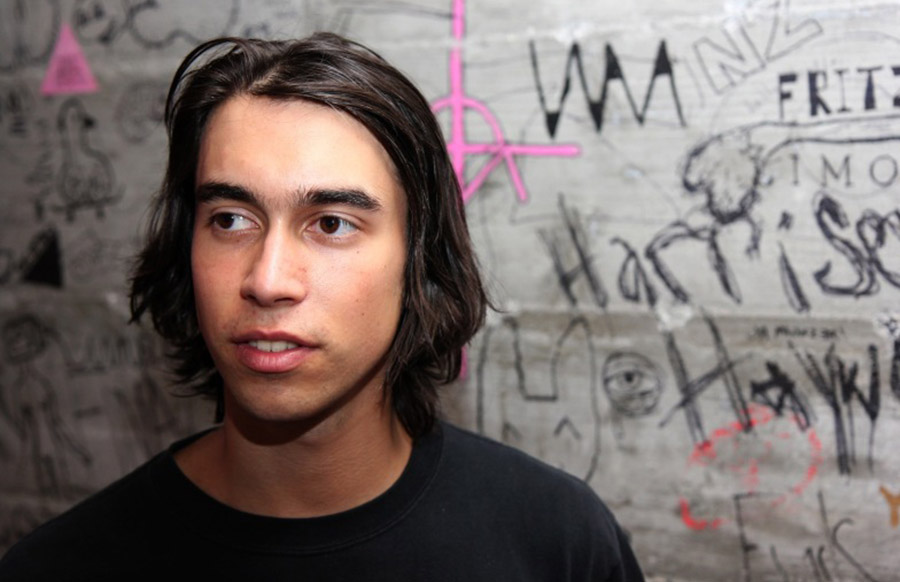 “Somebody told me I shouldn’t go to school / I should just play guitar and try to break the rules / I thought I’d do it but I didn’t start / I couldn’t bring myself to break Mommy’s heart,” the precocious singer-songwriter Alex Giannascoli sang on 2011’s “Big World.” The song was released just weeks after his high school graduation. Two months later, he was off to Temple University to study English, despite harboring decidedly nonacademic ambitions. Alpha, step, indeed.

In the ensuing years, Giannascoli — who records as Alex G — proceeded to release an ungodly amount of music on Bandcamp, much of which is preternaturally good. He quickly became a fixture in the Philly underground scene, playing basement shows for sweaty, inebriated undergrads. Eventually, the bigger venues came calling, and so, too, did the nascent Brooklyn label Orchid Tapes, which inked him to a deal in early 2014. In June of that year, Giannascoli released DSU, his first properly mastered full-length, to critical acclaim, and promptly went on tour with Cymbals Eat Guitars.

Giannascoli had more or less “made it” by indie standards, and in doing so, he found himself at a crossroads. It was time to decide if he wanted to make music a bona fide career, which would necessarily require him to do the unthinkable — “break Mommy’s heart” — and drop out of school. Surprisingly, he says this was an easy choice: “[Leaving Temple] was the logical thing to do,” he explains. “A clear path had opened up, because I got a new record deal.”

Indeed, Giannascoli signed to Domino Records last September — the indie equivalent of being called up to the majors — and immediately got to work on Beach Music, his forthcoming follow-up to DSU. Nevertheless, he didn’t feel obligated to make a more “professional” record: With the exception of a key production assist from Unknown Mortal Orchestra bassist Jake Portrait, Beach Music largely sticks to the same DIY formula of its straight-to-Bandcamp predecessors.

“For every album, I feel an obligation to myself to make something that I’m really proud of,” he says. “But other than that, I make an effort not to feel any pressure from outside forces.” Of course, when he began making music, there weren’t any outside forces, save for the opinions of his Haverford High School classmates in suburban Philadelphia. But now music is his full-time job, and with it comes the attendant responsibilities to sell albums, impress critics, and tour constantly — stressful stuff for a recent college dropout.

If Giannascoli’s work ethic is any indication, though, he’ll adjust well to full-time employment. His sheer prolificacy — seven full-length projects in five years, plus a bevy of singles — is truly something to behold, and contradicts the slacker image he’s curated over the years. Moreover, this marriage of quality and quantity is what allowed him to cultivate such a rabid, sizable fan base in the first place. But is it sustainable?

Giannascoli is dubious. “It’s inevitable that I’m going to slow down,” he says. “From knowing other musicians, I wouldn’t even say that I’m more prolific than them. I’m just in a position to put more out … because I do everything from home.”

Beach Music’s extended lead time has included well-received promotional singles and more press than Giannascoli has ever received. Such are the spoils of working with an established label. With Domino handling his PR and agent Greg Horbal booking his shows, Giannascoli is able to focus strictly on music.

And the music doesn’t disappoint on Beach Music. The dreamy, bedroom aesthetic feels of a piece with earlier Alex G projects such as 2010’s Race and 2012’s Trick, but Giannascoli has made noticeable strides as a singer and as an instrumentalist. “My recording techniques have gotten a lot more systematic,” he explains. “I know exactly where to put the microphone now to get a decent drum sound, and I know how to set my guitar to make it sound like a bass.”

Thematically, Giannascoli strikes a delicate balance between superficial irony and subtextual sincerity. When I ask him if the title is a joke — after all, this album isn’t exactly Corona commercial material — he responds with disarming earnestness. “It’s not a joke,” he says. “Beach Music was a book sitting around my house, and I really liked the way it sounded.” Thou shalt not doubt Pat Conroy’s influence on the lo-fi scene, I guess.

Beach Music’s cover art is similarly incongruous: It depicts Rama, a Hindu deity, hugging the monkey god Hanuman. When Giannascoli tells me this, I expect him to semi-pretentiously describe how this religious imagery encapsulates the album’s ethos, but instead he claims ignorance. “You’d have to ask my sister what it means … she painted it,” he confesses.

In fact, Giannascoli’s sister has long served as his personal tastemaker. She introduced him to Wilco and Radiohead when he was a kid — bands he now cites as major influences. Giannascoli’s biggest influence remains Modest Mouse, the first band he ever really loved. His favorite album is This Is a Long Drive for Someone With Nothing to Think About, a meditation on the mind-numbing isolation associated with traveling (among other things), which is fitting given that he’s spent a significant chunk of the past year on the road, performing across the United States. Beach Music is the first project he’s penned while on tour, and it shows, most notably on tracks such as “In Love” and “Station,” which are marked by a palpable sense of longing.

He’s even come to appreciate the daily grind of touring. It’s given his life structure, he says, and prevents him from dwelling on feelings of self-doubt. In particular, he likes to visit the Southwest. He says the rugged, barren landscapes of Arizona and New Mexico appeal to him, and the muted scenery keeps his mind at ease.

A former high school cross-country runner, Giannascoli recently started running again, at the behest of his bandmate Sam. It’s part of a serious effort he’s making to “be more content,” he says, which raises some intriguing questions about his future. Is he satisfied with the current trajectory of his career, or does he plan to eventually attempt a Weeknd-like takeover of pop radio? Is he willing to accept the relative modesty of indie fame, or does he yearn for something more?

This post has been updated to correct who handles Giannascoli’s booking. It’s Greg Horbal, not Domino.