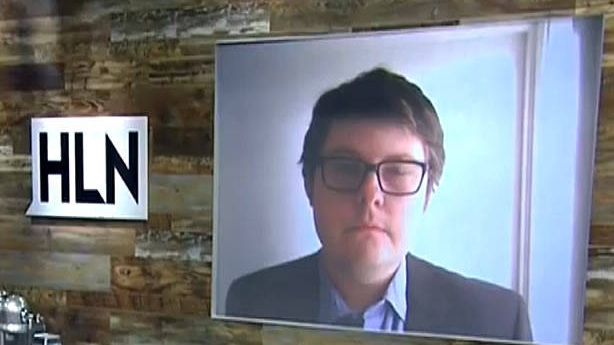 I don’t know who came up with the idea that the viewing public would prefer to hear from The Internet when turning their televisions to the news, but on Wednesday, a gleeful nation saw that concept taken to an extent rarely glimpsed on basic cable. I am speaking, of course, of Jon Hendren’s impassioned discussion of Edward Snowden on HLN.

There are two problems here, as you’ll see, although neither of them is that this interview is apparently taking place in the break room at West Elm. The first is that this is Twitter personality Jon Hendren, not Al-Jazeera journalist John Hendren, being questioned by Yasmin Vossoughian. The second is that Jon Hendren has come on the program not to defend Edward Snowden, but Edward Scissorhands.

I’m going to pause right here and point out that HLN has marketed itself in a very specific way, and that this appears to be the network’s current catchphrase:

Yesterday, it wasn’t wrong. Yesterday, there was a pointy reckoning, delivered on live television and crafted with the utmost care. Let’s break down Hendren’s work here:

0:21 The windup. Hendren establishes himself as a defender of a man no one in the room has any reason to expect is not the same Edward, laying tracks of ostracization that run parallel for both icons, though at the time he’s the only one who knows it.

1:35 This here is crucial, maybe the most crucial: More than half the allotted time for the interview has passed before Hendren even begins to show his hand, and he gives a good long lead-up before the first turn. “But I think to cast him out, to make him invalid in society, simply because he has scissors for hands? I mean, that’s strange, because I mean, people didn’t get scared until he started sculpting shrubs into dinosaur shapes and whatnot.”

2:14 A patient fisherman is never satisfied with a single cast. A shorter windup this time, and then: “Just because he was created on top of a mountain by Vincent Price, and incomplete with scissors for hands and no heart, Edward Scissorhands is a complete hero to me.”

[Sincere admiration for Vossoughian here, by the way; either she is an ironsided pro, or she is just as bored with this method of delivering the news as she should be and is checked out for the entire thing.]

2:29 Finally, the prestige: “I mean, where else is he gonna go? You know? We cast him out, like we got scared when he poked a hole in a waterbed with his scissor finger? Like, that was just unreasonable of us.”

I don’t know who decided that HLN (née CNN2) had to be a thing in the first place; I live in the city where it is allegedly headquartered, and this is the first time I’ve ever seen it playing anywhere other than in the airport, so well done in that regard, y’all. But there’s an argument to be made that this is the logical termination of that kind of mission statement, and that the result is exactly what those instincts were asking for: to hear from the Internet in its purest form, which is to say, to have the Internet talk directly past you, on television, passing like surly trains in a foggy night. If there’s anything further to wish for at all, it’s for there to really be a journalist of that standing who has @fart as his/her Twitter handle … but I guess that after today, we have one, don’t we?

'Do You Like Prince Movies?' Podcast: The Final Episode