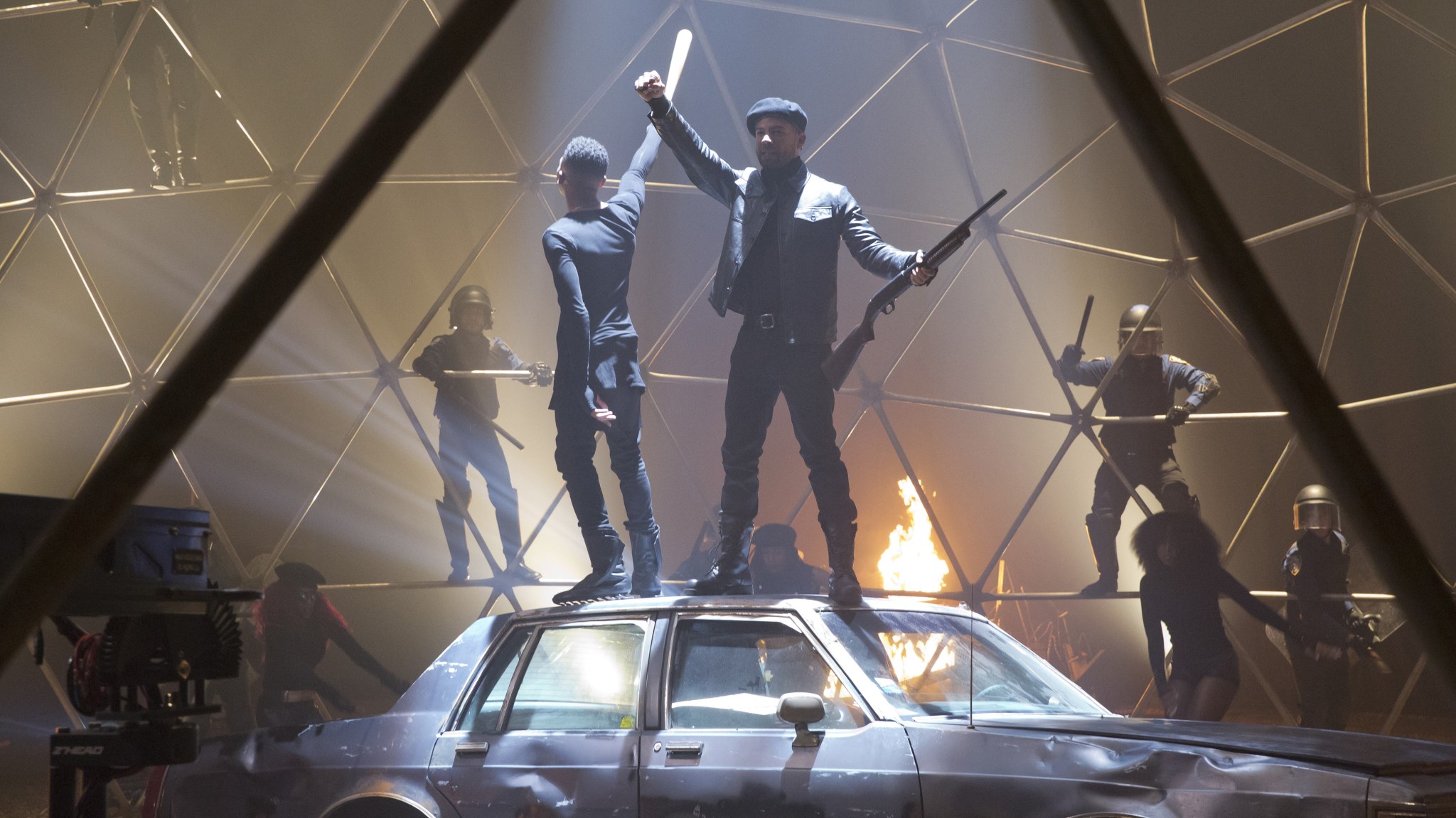 Despite its propensity for shocking twists and storytelling histrionics, episodes of Empire are actually built with a very clear structure in mind. The A, B, and C plots all revolve around some sort of large-scale musical set piece: the White Party from Season 1, last week’s Lyon dynasty takeover of Leviticus, and, of course, the legendary “Drip Drop” music video. These scenes tend to bring all the characters together and move the plot forward without getting bogged down in a lot of chitchat. Sometimes, they actually serve as a form of internal analysis of the series.

The Season 2 premiere’s #FreeLucious festival was dripping with the sort of confidence that can only come from a show returning from a historic run of success. It was a metatextual scene that moved the story but also commented on itself. It was a political statement (prison bars, gorilla costumes, Black Lives Matter, etc.) and an ambitious, self-congratulatory moment of triumph for TV’s biggest show. Empire’s secret weapon is the ability to constantly remind you that it’s important and popular and “the best” — a perfect distillation of the hip-hop ethos.

Following an FBI raid on Empire headquarters, Lucious and Cookie temporarily joined forces last night to produce a music video for the song “Ain’t About the Money” featuring Hakeem and Jamal in the hopes that the video is SO AMAZING that it intimidates the FBI into backing off. Cut to FBI director James Comey sweating bullets at his desk: Hakeem AND Jamal? In the same video? And they got them booty dancers?! Oh shit. Call off the dogs. I can’t handle all that fire. Obama don’t pay me enough.

The director of the video helpfully explained the concept of the production to her crew after the entire set had already been built, costumes were purchased, and extras were cast. The “California Love”–inspired video is to have a “postapocalyptic Black Panther theme.” Oddly enough, Postapocalyptic Black Panthers was the name of my band in high school — probably the top all-African-American Sublime cover band in California.

Anyway, Hakeem and Jamal are holed up in a Thunderdome while jackbooted fascists do their worst to try to get in. I say “do their worst” because they can’t seem to subdue the Lyons’ army of Laker Girls even while they’re mid-routine.

What, are their kicks too high? These guys really give fascists a bad name. The simmering tension between Hakeem and Jamal finally comes to a head when the photographer hired to take the portrait of Jamal for his Rolling Stone cover reveals a painting of his subject in the middle of musical ecstasy. Lucious calls the painting and the photographer “genius.” “You’re more than an artist now. You’re the art,” the photographer later tells Jamal as they stare longingly at the posters they’ve slapped onto the wall of a building they surely do not own. The Lyon family is so hard that when they see a sign that says “Post No Bills,” they post at least five bills to prove they run things. Tell ’em, Mimi:

Of course, that painting is not the “best,” the “greatest,” and especially not “genius.” I should say here that my favorite artist is Bob Ross, so I’m not 100 percent qualified to judge, but even I can tell you that a ’60s black-light poster of Jamal does not qualify as “genius.” Thankfully, Hakeem calls out his brother’s rapidly metastasizing ego. It was a rare moment in which a character on Empire identified that something that was supposed to be the height of artistic achievement was actually complete nonsense. Can you imagine Andre saying, “Um, Dad. Actually, ‘Snitch Bitch’ was a fucking abomination. I have pierced both of my eardrums just so I never have to listen to your squeaky voice ever again. Your song is so bad that it cured Stevie Wonder’s blindness for 10 seconds, then blinded him again. The only thing he saw during that brief moment of sight was a clip from Grown Ups 2. I wish I was never born.” A scene like that is not going to happen on Empire because “Snitch Bitch” is just the most remarkable thing you’ve ever heard and you will be reminded of that every opportunity the writers get.

Empire is its own greatest hype man, constantly yelling its name at you like Metro Boomin or Mike Will Made It on a mixtape. “I’m doing this for the Empire” or “I’m coming for my Empire” function as constant reminders of what you are watching. Scenes end with characters walking past a sign lit up in gold that says “Empire” right before a commercial break. It’s like if Ed O’Neill said “Boy, I sure love my modern family” or Justin Theroux asked Carrie Coon to “reheat the leftovers” every week.

But extreme self-belief is the cornerstone of hip-hop. Battle rapping and cyphers are about communicating that you are untouchable, that you’re strong, and that you cannot be faded. That’s Empire, which might be why it’s captured the imagination of black audiences in a way that similar shows have not. Last night’s music video was made assuming it could bring the nation’s most powerful law enforcement agency to its knees. That’s so absurd that it would make even Donald Trump say, “Man, you’re all full of yourselves.” The director actually says to her performers, “Now remember, you’ll defeat the riot squad with your brotherly love.” Uh-huh. Sure. What is this, Captain Planet?

The shoot ends with Hakeem stabbing Jamal’s painting and the brothers scrapping during the final take of the day. Hakeem even threatens Jamal with a baseball bat before storming out. What are Jamal and Hakeem fighting about? Hakeem thinks he’s better than Jamal. Jamal disagrees. They can never see the other as an equal, even when their collaborations are considered “genius.” I’m sure if you asked the writers and producers of Empire, they’d say they have no equal, and who am I to argue?

Twilight of the Movie Brats: Steven Spielberg and the Old 'New' Hollywood