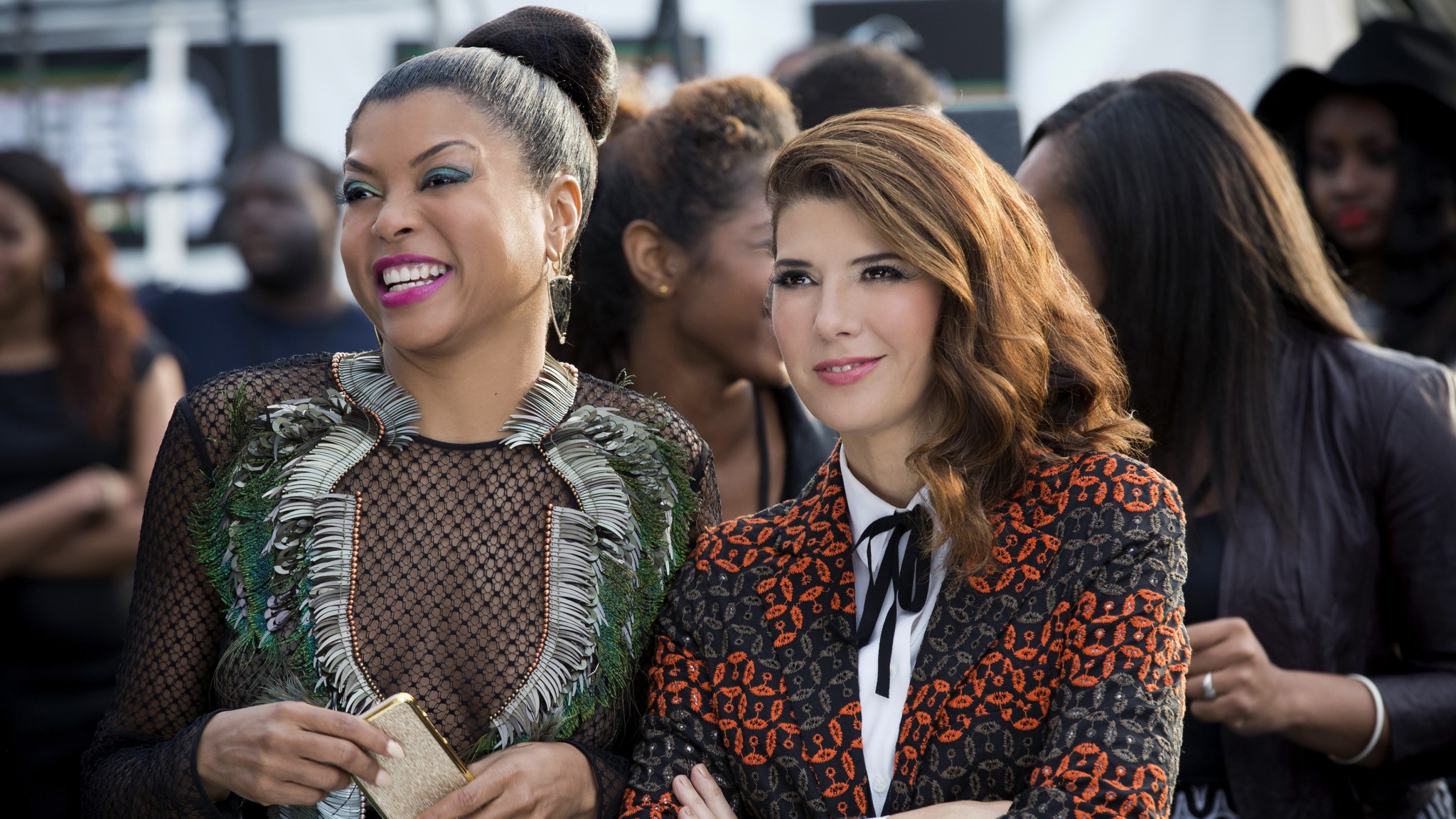 Last night’s season premiere of Empire was a master class in ludicrousness; a veritable Vegas Seafood Buffet of hashtaggable moments. The show began with the audacious, racially transgressive image of Cookie Lyon in a gorilla suit suspended in a cage high above a concert that doubled as a political protest. It ended with down-low cannibal Chris Rock getting murdered by a gang of duplicitous prisoners. In between, this happened: 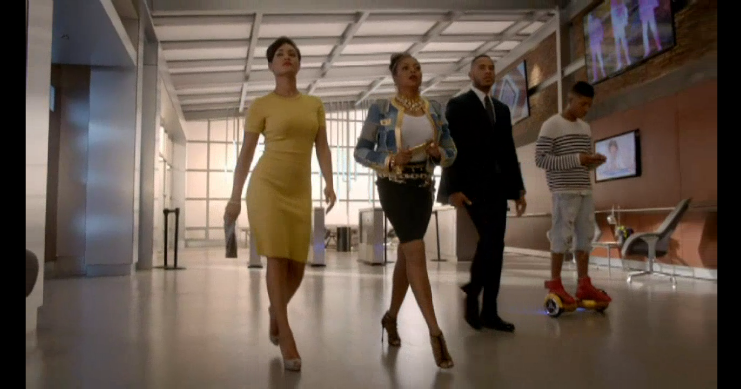 Yeah, that’s Hakeem on a PhunkeeDuck/Airwheel/IO Hawk/Hoverboard. I want Hakeem on a PhunkeeDuck to be my family’s coat of arms. I want Hakeem on an IO Hawk tattooed on my back. I want to name my first-born son “Hakeem on an Airwheel.” I think we’ve all been waiting for this moment since J.R. Smith rolled through Quicken Loans Arena last June,1 so why can I only think about the bravura performance of Marisa Tomei? How did she manage to upstage Chris Rock as black Hannibal Lecter, King Kong Cookie, CNN’s professional meme generator Don Lemon, Al Sharpton, and Bryshere Gray on a damn PhunkeeDuck?

Get it Anika! Bust those cakes #Empire https://t.co/1tuQh9VPdt

This season, Marisa Tomei plays the absurdly named investor Mimi Whiteman. Cookie, Andre, Hakeem, and Anika need her to purchase $250 million worth of stock in order to take control of Empire and remove the currently incarcerated Lucious from his post as CEO of the company. The insurgents’ master plan is to seduce Whiteman so that she does their bidding. As such, the episode devolved into a game of “Who will have sex with Marisa Tomei?”

How could anyone of either gender deny the unsubtle sexual power of Mimi Whiteman when she made her debut wearing both a Colonel Sanders tie and a pantsuit that looked as though it was cobbled together from one of those cheap rugs you can get in the apartment section at Urban Outfitters? The swag was undeniable. After a brief flirtation with Cookie, Mimi settled on the dubious charms of “Boo Boo Kitty” Anika. Perhaps it was her penchant for wearing practical business attire that caught Mimi’s eye. It’s hard to say for sure, but it definitely wasn’t her aptitude as a dance partner.

In the now-infamous, opulent lesbian bacchanal, we became privy to the sheer depth of awkwardness inside both characters. Over the calming strains of “Hot Boy” by Bobby Shmurda, Anika gyrates as though she is being punched in the kidneys by an invisible leprechaun. Mimi’s moves resemble those of Elaine Benes, or a particularly spirited interpretation of Tevye from Fiddler on the Roof. Anika did her best to, as Empire‘s official Twitter account described it, “bust those cakes,” but something was missing that I can’t quite pinpoint. Perhaps I’m just not used to seeing television characters performing a task like this as badly as a normal person (i.e., me) would. This wasn’t quite Carlton Banks–level awkward, but it was close.

I’ve probably watched that Vine 725 times so far, periodically clicking away from the open Twitter tab to check my fantasy baseball stats or verify that I am, in fact, still residing on the planet Earth and not the Negative Zone from Fantastic Four. This is definitely still Earth and that scene was absolutely real. The seduction did not work, even after Anika went for the gold medal and slept with Mimi. In a classic Empire swerve, Mimi reveals that she decided to team up with Lucious, who she says “is Empire.” In her estimation, the company is nothing without him, which could be interpreted as a subtweet directed toward fans who see a future for this show that doesn’t include Terrence Howard.

In theory, Terrence “Terryology” Howard is supposed to be the main antagonist for Cookie Lyon, but lately the only thing I can imagine Lucious Lyon doing is cluttering his prison cell with origami swans and attempting to discredit the multiplication table. Rumors persist that Howard’s personal drama has caused the show’s producers to scale back his appearances in the second season. That seems a bit far-fetched, since Lucious’s term in prison was set up by last season’s finale, but for anyone to even consider the lead of broadcast TV’s biggest series expendable says much about where that character (and that actor) currently resides in the public imagination.

Cookie is, without question, the breakout character. Taraji P. Henson got the Emmy nomination, not Terrence Howard. Whether the opening credits acknowledge this or not, she’s the lead of this show. Still, the show’s writers do their best to make Lucious seem like Cookie’s equal and a suitable enemy for her. A notable example of their noble, if potentially futile, effort is last night’s handling of the Frank Gathers prison B-plot.

Lucious’s dispatching of Chris Rock’s man-eating Gathers was clearly meant to hammer home Lucious’s inherent badass quality. The shock of killing a big-name guest star who’s playing a menacing heel should have done that trick, but the neutering of Gathers’s cannibalism and Rock’s stilted line deliveries rendered his character as threatening as a malfunctioning leaf blower. I think I was actually more afraid of what Cookie would do to Andre Leon Talley after he threw shade on her outfit than I ever was of Gathers. Rock’s choice to underplay the role meant he was destined to be washed away with the tide of Empire‘s relentless “OMG” moments.

Of course, on the average prestige drama, we’d be sitting through at least one full season of Frank Gathers as a constant threat who would only be defeated after our heroes were forced through numerous traumas, both physical and psychological. On Breaking Bad, it took three seasons to be done with the menace of Gustavo Fring. This is Empire, though, and that means that each episode is made up of an entire season’s worth of plot developments. Empire is not about the slow burn, the ratcheting of tension, or the explosive payoff. Every scene is a payoff.

Empire is the proverbial sprint, rather than the marathon. Guest actors have to make their mark and make it fast before the story passes them by. Courtney Love’s Elle Dallas and Judd Nelson’s Billy Beretti came and went from the show, and there’s not much expectation or interest to see them return. They either didn’t quite understand the tone or just didn’t have characters that were meant to resonate. I understand the logic behind casting Rock as Gathers, though. His wiry frame and non-threatening appearance could easily fit into the subconscious idea of what a sociopath really looks like; the unassuming “guy next door” type who shocks everyone by being a maniac. But that kind of subtlety is not this show’s strong suit.

Maybe I would have responded more to Rock’s performance if the cannibalism hadn’t been deemphasized in such a weird way. Empire needs its characters to be larger than life, and for their emotions to be plain and out in the open. The show lives and dies on grand gestures, which is why I will remember Marisa Tomei’s horrible dance long after this season is over, but I’ll have a hard time recalling who Frank Gathers was.

Empire fans should be thrilled that Lee Daniels, Danny Strong, and Ilene Chaiken finally found an actor formidable enough to act as a foil to Taraji P. Henson, since it’s definitely not Terrence Howard. Tomei is one of the rare guest stars to not only have the benefit of a scene-stealing, bawdy role, but also the ability to intimately understand and appreciate what makes this series so enjoyable. Audiences have embraced these characters because of their bravado and their swagger. Tomei’s performance reflects that in ways Rock’s did not. As ridiculous as her dance was, she owned it, which is the most Empire thing a character can do. It’s appropriate that a show so unapologetic about putting forth a unique, vital version of femininity as its centerpiece would need another strong woman to be her opposite number.

'Empire' of the Fun: Fox's Runaway Hit Comes Roaring Back