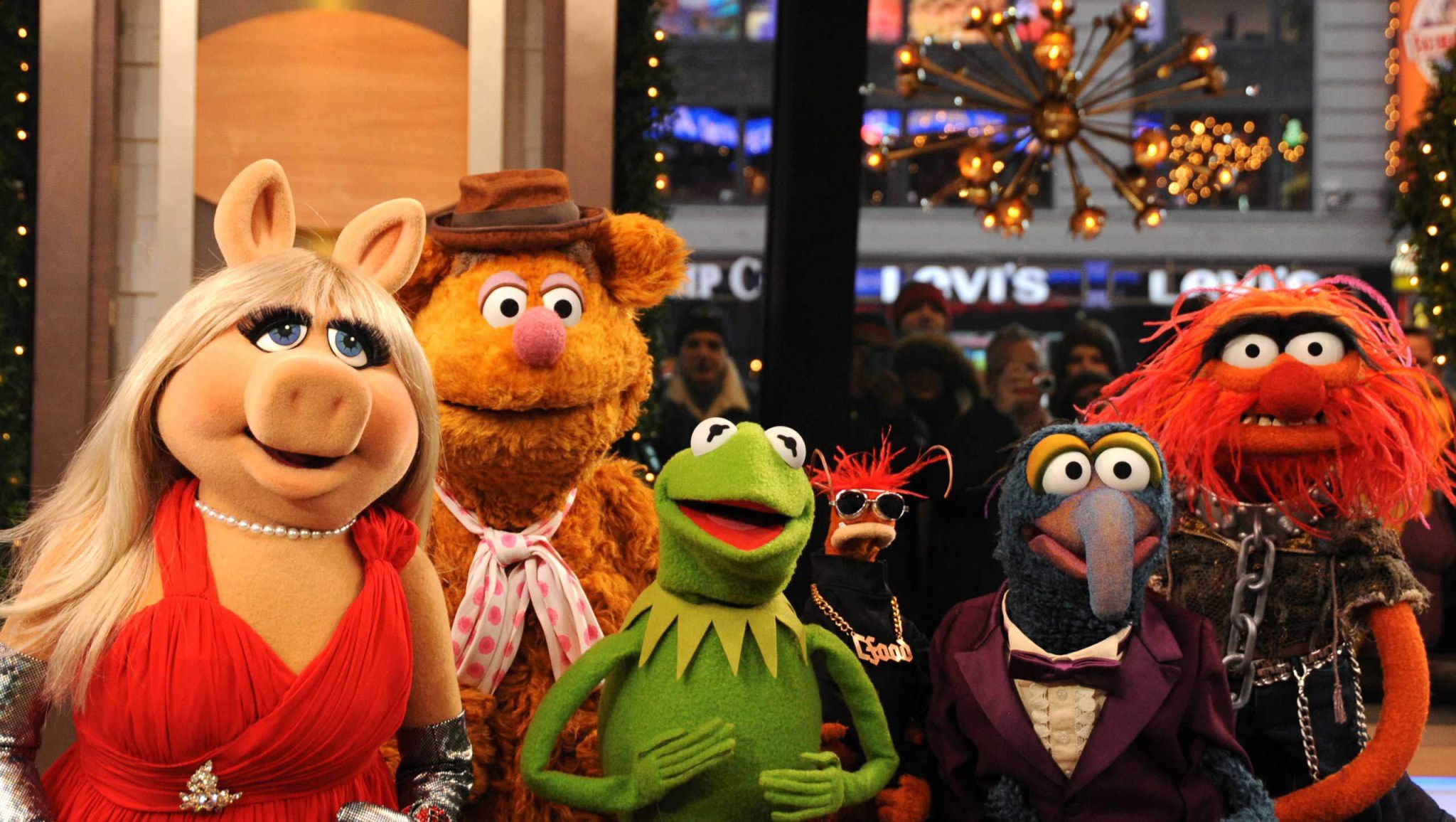 The most fanciful thing about ABC’s muppetational but seldom celebrational The Muppets is that the late-night talk show behind whose scenes it takes place has a female host. In this regard, I support its vision. I support nothing else about The Muppets except the pilot’s use of the great Jere Burns, drier than a silica gel packet as always, in a B-plot in which he refuses to accept his daughter’s interspecies relationship with Fozzie Bear. His issue seems to be more about Fozzie being a bear than being a Muppet — at dinner, he makes snide comments when Fozzie compliments the salmon — but in a broad-stroke sense, I am with Burns on this one. I guess I’ve found the one marriage-equality hypothetical on which I’m a fuming mossback conservative: Turns out I am opposed to the sexualization of the Muppets and therefore to the implication that humans and Muppets1 can or should miscegenate.

This puts me roughly on the same team as the fainting-couch wearer-outers at the Donald Wildmon front group One Million Moms, who took a break from their courageous war on homofascist breakfast cereal and sinfully delicious lesbian yogurt on Monday to declare a fatwa on the new Muppets as “perverted” based solely on the ads — particularly the one that promises “full frontal nudity” and features Kermit the Frog in a casual locker-room pose. A clock that stopped in 1955 and should be thrown in the garbage because it’s an insanely and attention-hungrily homophobic clock is still right twice a day: There is nothing good about this ad, and perhaps you should not be in the Muppet-selling business if you can’t sell the Muppets in 2015 without adding the implication that Kermit fucks, let alone that Miss Piggy wants to fuck Nathan Fillion.

I am, by the way, all for puppets doing whatever pulls their dopamine string. I liked Avenue Q and I liked Wonder Showzen and I remember Greg the Bunny being underrated and I think the original Ted is the best work to date by one of America’s worst filmmakers. I get that adorable felt characters indulging depraved grown-up urges and espousing cynical grown-up sentiments can be funny and subversive, because I’m not an idiot. But shows like these work because they zero in on the discrepancy between the soft and brightly colored fantasies of comfort and security with which we nurture children and the often unpleasant and painful truths of the adult world. They’re funny because they’re deeply sad. They take the core concept of The Velveteen Rabbit and turn it inside out, presenting a world where instead of becoming loveworn and thereby real, our childhood pals just grow up to be shitty, diminished adults like the rest of us. This is a rich premise for stories that depend on our winking recognition that we’re looking at Muppets once removed. But on The Muppets, diminished adulthood has come for the actual Muppets, and it’s really depressing.

I once interviewed Jason Segel, who cowrote and starred in 2011’s The Muppets, a modern Muppet movie that worked precisely because it seemed so unconcerned with telegraphing its modernness, and because its Mary Sueish new coprotagonist Walter was so obviously an expression of Segel’s unfulfillable yearning to be a Muppet. At one point Segel described receiving script notes “from, like, the Muppet brass, saying ‘Muppets are never sad. Muppets never break up.’” As two guys who’d been emotionally clobbered at an early age by the “Saying Goodbye” number from The Muppets Take Manhattan, we both sat there shaking our heads at the very idea. Sadness, estrangement, yearning, even anger — of course these are colors with which the Muppets have always painted. But the Muppets’ reality was never sad. The Muppet world was this bright, weird counterculture family that individual Muppets occasionally left to visit the outside world, which tended to be full of cravenness and corruption and jewel thievery. Occasionally the governing forces of that world would pull the Muppets apart; inevitably they would be reunited, to put on a show whose idea of “putting on a show” was already dated in 1976. Their sadness made their reunions joyous; you can’t have a rainbow connection without a little rain.

But it’s the joy that’s key. The canonical touchstone of the new Muppets seems to be the middle part of the classical Muppets-are-threatened/Muppets-are-reunited arc, specifically the part of Muppets Take Manhattan where an amnesiac Kermit becomes a soul-deadened ad-agency drone. This was hippie Jim Henson’s idea of a tragic fate, and yet on The Muppets all the vaudeville has been bled from the equation, and being a Muppet is just another job, the thankless kind about which they make workplace sitcoms. Cocreator Bill Prady also cocreated The Big Bang Theory, but the obvious touchstones here are The Larry Sanders Show and especially The Office, the hottest pseudo-documentary sitcom of, um, 2006 or so. The Venetian blinds behind Kermit in his talking-head interviews are very Dunder Mifflin; the way The Muppets cops to the tiredness of the pseudo-doc approach by having Gonzo complain that it’s a tired approach is very wocka wocka wocka.

Specifically, being a Muppet is now an industry job. As the beleaguered producer of Up Late With Miss Piggy, Kermit appears to have been reimagined by a TV showrunner armed with a hand mirror — stress-eating, sweating network notes, and cowering in fear of his star’s diva fits. He’s dating a new pig, having split from the fame-monstrous revenge-caricature that this show has turned Miss Piggy into. Basically, The Muppets gives us Miss Piggy as Jenna Maroney, which is weird because Jenna Maroney was basically Jane Krakowski doing Miss Piggy. It’s a little like how the Point Break remake appears to be a rip-off of The Fast and the Furious, which was itself a Point Break rip-off with cars.

What’s missing is the demented glee that made the original ’70s The Muppet Show such a crucial booster shot of irony and anarchy for the kids who became its audience even though it was only nominally aimed at them. Whether the guest star was Lynn Redgrave or Johnny Cash, Debbie Harry or Charles Aznavour, it didn’t matter — they scanned as representatives of adult authority who’d somehow been booked into a demented corner of the world run by pigs and frogs and bears and whatever Sweetums was supposed to be. And by pretending that all of this was normal, they normalized weirdness. There’s something fundamentally wrong about a show in which the Muppets are the adults.

Because it would be inappropriate to blame Jim Henson for dying, I will blame this on Frank Miller, who’s still alive. Nearly 30 years ago, Miller’s The Dark Knight Returns made Batman over as a grizzled and haunted alcoholic vigilante who feels young again only when he’s pulverizing muggers’ bones. Like Alan Moore’s Watchmen, which premiered as a limited series that same year, Dark Knight was a critique of certain core aspects of the superhero narrative, but when both books proved to be hits, comics publishers seized upon the “gritty reboot” as a marketing ploy. Suddenly the comics industry’s most seemingly insoluble problem — the tendency of its customers to turn away from cape-and-tights products upon reaching a certain age — was moot; by highlighting surface indicators of “adultness,” specifically inappropriate-for-children sex and violence, the superhero narrative could follow its young readers across the bridge of sighs to moody adolescence and beyond. There was no longer any need to grow out of things. Three decades later, we have universalized this approach and rebooted nearly everything there is to reboot. We have burned all the furniture for fuel and we’re starting to chop away at the deck. We are a terrible, dispirited society and we finally have the terrible, dispirited Muppets we deserve.