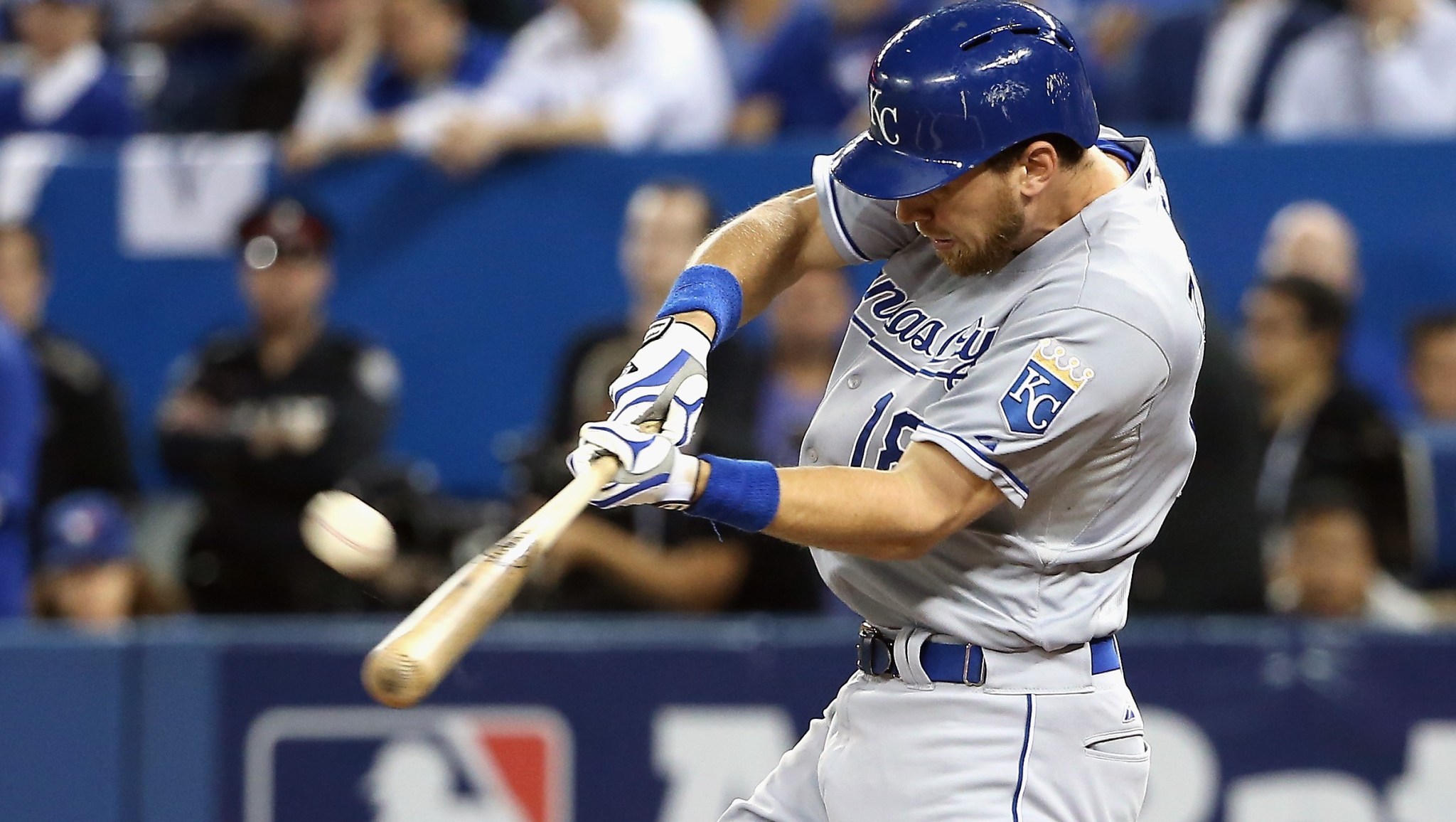 It was an annihilation, the kind of beatdown the Blue Jays had inflicted on so many opponents this season — only this time, crashing down on their own heads.

Hacker supreme Alcides Escobar continued to swing at nearly every first pitch, spit on the notion of plate discipline, and challenge our idea of what a leadoff man should look like … and he hiked his ALCS batting average to .600. Ned Yost continued to bat Alex Gordon in the eighth spot when no other manager ever would … and Gordon rewarded him with more times on base, and three more runs scored. Alex Rios continued to start in right field despite posting one of the worst batting lines for any right fielder this century … and he went 3-for-3 with a 415-foot home run.

Thanks to this kind of lineup weirdness (plus some lousy Toronto pitching), the Royals have scored nearly nine runs per game during the ALCS. It’s enough to make any Jays player freak out.

For all the head-scratching that comes with Yost’s batting order and subpar hitters doing amazing things, the decisive blow in Tuesday’s Game 4 came from one of the most reliable players in baseball. Sometimes overlooked for his lack of eye-popping Triple Crown stats, he long ago established himself as a great all-around player. And after years of mostly subpar playoff results, he’s finally having his October coming-out party at 34. For all the reasons the Royals stand one game away from clinching their second straight American League pennant, Ben Zobrist stands as one of the biggest. That’s a surprise in itself, coming off his worst all-around season in seven years.

Zobrist’s first home run of the postseason came just four pitches into Game 4. First, Escobar continued his unfathomable hot streak, swinging at the first pitch he saw in the first inning for the seventh time in eight games. After R.A. Dickey’s knuckleball fluttered underneath his bat, Escobar devised a clever Plan B, peeking toward third, then dropping down a bunt that Josh Donaldson couldn’t handle, reaching on an infield single. Then on an 0-1 count, Zobrist got a knuckler that spun right in the middle of the plate, navel-high. He didn’t miss it, launching a 416-foot shot into the right-field bleachers. Just like that, it was 2-0, and the K.C. rout that eventually ended at 14-2 was under way.1

Like his second-base counterpart (and potential World Series opponent) in New York, Zobrist has turned good regular-season hitting results into transcendent postseason moments. With that two-run homer plus a single and walk in Game 4, Zobrist hiked his ALCS batting line to .389/.421/.722.

But unlike Daniel Murphy, Zobrist’s signature playoff feat came against the kind of pitch he didn’t handle all that well earlier this year. This October, Zobrist has feasted on off-speed pitches (including Dickey’s knuckleball), something he didn’t do often during the regular season.

That small-sample-size-induced aberration aside, Zobrist at bat this postseason looks a lot like the Zobrist at bat of the past seven regular seasons. For the Royals, that’s a good thing.

Zobrist batted .276/.359/.450 this year, ranking him third among American League second basemen in park-adjusted offense. His most notable skill at bat is his ability to control the strike zone. Only two other batting-title-qualified players (Michael Brantley and Jose Altuve) struck out less frequently this year than Zobrist. He’s made even more frequent contact during the playoffs, fanning just three times in 41 plate appearances.2

That’s what the Royals banked on when they acquired Zobrist by dealing two young pitchers3 to Oakland just before the July trade deadline. Per Baseball-Reference’s Wins Above Replacement, Zobrist has been the fifth-most valuable position player in baseball since Opening Day 2009, trailing better-known stars Robinson Cano, Miguel Cabrera, Adrian Beltre, and Joey Votto. But many of Zobrist’s trademark skills aren’t what they once were.

One of the best baserunners in the league during his prime, Zobrist was below average this year by advanced metrics. One of just three players in major league history to play 500-plus games at second base, 400-plus in the outfield, and 200-plus at short,4 Zobrist’s diminished range kept him from playing any games at short for the first time in four years. That eroding defensive ability showed up in more obvious ways too: Once an elite defender at multiple positions, Zobrist rated as 12 runs worse than league average5 while splitting time between second base and the outfield. Zobrist becomes a free agent whenever this latest Royals postseason magic carpet ride ends, and having lost a step on the basepaths and on defense will limit what potential suitors offer.

None of that matters at all for his current employers. Zobrist’s high contact rate has been a perfect fit for a Royals team that pathologically puts balls in play and exerts pressure on opposing defenses. More broadly, Zobrist typifies the kind of ballclub the 2015 Royals have become: one that can still beat you with defense and a loaded bullpen, but can now also beat you with an improved offense — one that just might be ideally built for playoff success.