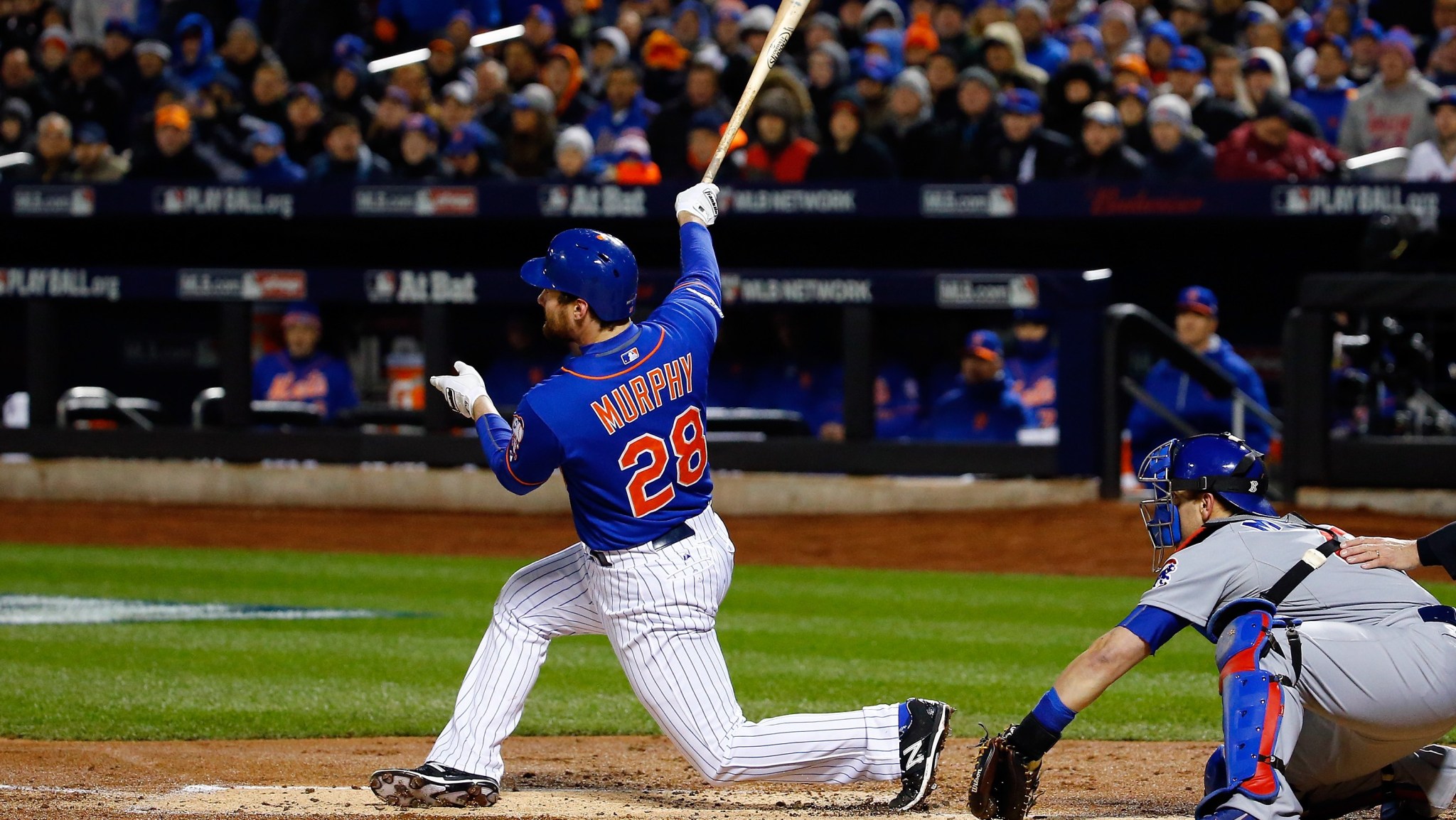 Daniel Murphy is an exploding supernova, dropped into the heart of an erupting volcano, plowing through a bowl of hallucinogenic chili.

The Mets second baseman has set or threatened to top a laundry list of playoff records, cracking homers in four straight playoff games, as well as five in the first seven postseason games of his career. He has some help, of course, led by Curtis Granderson, a hard-throwing starting rotation, and unhittable closer Jeurys Familia. But by and large, the Mets are two wins away from their first trip to the World Series in 15 years because a pretty good player is suddenly hitting like peak Barry Bonds.

How Murphy got here is a testament to the power of incremental changes, and to the immutable fact that sometimes, shit happens. Through subtle improvements in his hitting approach, he has reached the peak of his baseball career. And through the wonders of small sample size and the kind of playoff weirdness we see every year, he’s making himself into an unlikely legend.

We have to start with Murphy’s list of victims, because it’s a damn murderers’ row. Stumping for your favorite NL Cy Young candidate is a fun and contentious exercise this year, given the excellent cases Zack Greinke, Jake Arrieta, and Clayton Kershaw all have for the award. In his first seven playoff games, Murphy homered off all three, including twice off Kershaw. Only two players had ever homered against all three: elite sluggers Giancarlo Stanton and Carlos Gonzalez … and now Murphy, who’d homered just 48 times in the first 3,081 plate appearances of his major league career, makes it three.

Nearly as remarkable is the overwhelming lefty vs. lefty disadvantage Murphy has overcome. Left-handed batters hit .203/.231/.323 against Kershaw this year; they managed just four home runs off Jon Lester all season. With two homers against Kershaw plus his NLCS Game 1 shot against Lester, Murphy is one-quarter of the way to the 12 long balls he had hit against southpaws … in his entire career. The pitch Murphy crushed off Lester was a cutter, marking the first time all season that a left-handed batter had gone yard against Lester on that offering. Murphy is also a lifetime .271/.303/.371 hitter against left-handers, with a .254/.284/.349 mark this year. The last time he homered off a left-handed starting pitcher before this year’s playoffs? July 1, 2014.

Oh, but there’s more to say about the struck-by-lightning odds that Murphy has overcome to turn into Roy Freaking Hobbs. So much more.

Murphy is just the fifth player in history to homer in four straight games within a single postseason.1 He’s also the first Met to hit five homers in a single postseason.2 In fact, with just seven playoff games under his belt, Murphy has already tied for the all-time lead for postseason homers by a Met, matching Mike Piazza with five. And among all the players in baseball history, only two blasted more home runs in their first seven career playoff games: Ken Griffey Jr. and Carlos Beltran.

In some ways, you could argue that Murphy’s homer in Game 2 of the NLCS came with a lower degree of difficulty. For one thing, it came against a right-hander, and Murphy was a legitimate force against righties this year, batting .290/.334/.483. For another, Arrieta has gone from being a force of nature through the regular season and the wild-card game to a very hittable pitcher who’s suddenly lost some zip on his fastball and has been hit hard in his past two outings.

On the other hand, the pitch Murphy hit for a two-run homer in the first off Arrieta was nearly impossible to hit … let alone to take over the right-field wall. Granted, Murphy didn’t exactly destroy the ball: The exit velocity off his swing was just 91 mph; only 11 homers have been hit that softly this year. But let’s not begrudge the guy. As Baseball Savant proprietor Daren Willman noted, of the 38,775 homers hit since 2008,3 only 20 have come on pitches as low as the one Murphy golfed off his shoetops.

Those kinds of feats aren’t normal, even for the best players in the game. But sift through Murphy’s stat line from the 2015 regular season and you can at least see the seeds of a breakout there.

For one thing, he has hit hard pitches (i.e. four-seam fastballs, sinkers, and cutters) well his entire career in terms of batting average, and particularly well in 2015. Murphy is still hitting for a high average on those pitches in October. The difference is that every one of his homers this postseason except the one off that diving Arrieta curve has come against hard stuff.

FanGraphs writer Owen Watson identified other advances in Murphy’s abilities this year. There is the jump in his contact rate (to a career-high 92 percent) and coinciding drop in his strikeout rate (to a career-low 7.1 percent). There’s also the spike in his pull rate: He pulled the ball 40.7 percent of the time during the regular season, the kind of spike that often presages a power surge — and Murphy did hit a career-high 14 regular-season homers before his playoff onslaught began.

Of course, no matter how much Murphy has improved, his 2015 playoff performance has been borderline impossible. Terry Collins bats him cleanup in Game 1 of the NLDS when all the data in the world says to do otherwise … and Murphy goes yard off Kershaw. Murphy rates as an average baserunner for his career by advanced metrics … and pulls off one of the boldest and most influential foot feats in playoff history. Murphy ranks as one of the worst glovemen at second base … and he makes a beautiful diving stop to seal a Mets win in Game 1 of the NLCS. Murphy gets an opposing manager so freaked out … he walks him intentionally to face Yoenis Freaking Cespedes, as Joe Maddon did in Game 2.

All of this is a stark reminder that no matter how thoroughly we break down and analyze every little angle, the postseason invites all kinds of delightful randomness. A one-game wild-card matchup doesn’t remotely tell you who the best team is … and by some measures, neither does anything short of a best of 200 or more. And really, any talk of clutch genes or (even more out there) a lucrative new contract for a skilled but also highly flawed player who’ll be 31 next Opening Day misses the mark. Any teams considering throwing tons of cash at Murphy after this terrific October risk Cody Rossifying themselves.

The best thing any Mets fan can do right now is just sit back and enjoy the show. Daniel Murphy may well continue to eat planets all the way through the postseason, which would be glorious, and gloriously unlikely. And if he doesn’t, there’s always deGrom, Syndergaard, and Harvey — the three pitchers actually expected to dominate, and the three-man fail-safe in case Murphy keeps with the season and turns into a pumpkin.