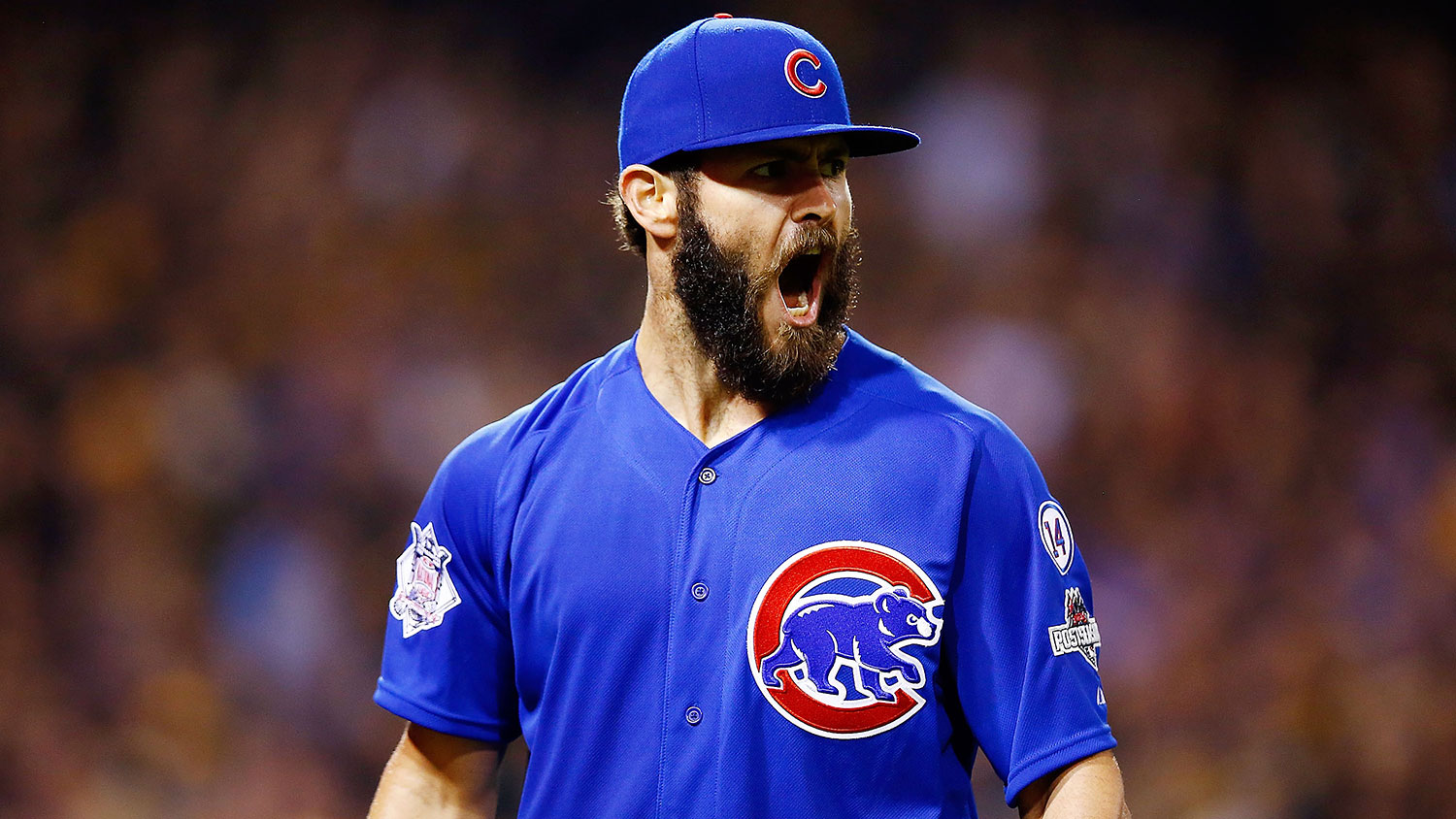 That’s become Jake Arrieta’s signature stat; 0.75 is the lowest second-half ERA in the history of baseball. Yet somehow it doesn’t capture just how dominant Chicago’s 29-year-old right-hander has been as of late. So, let’s try this instead: Since August 1, counting his four-hit shutout of the Pirates in the wild-card game, Arrieta has fired 97.1 innings, struck out 100 batters, walked 14, and allowed 46 hits, one home run, and an opponents’ batting average of .131. His ERA over that span?

Arrieta goes into today’s start against the St. Louis Cardinals with numbers that are nearly inhuman. But two years ago, when the organization that drafted Arrieta gave up on him, those stats would’ve seemed absolutely impossible. 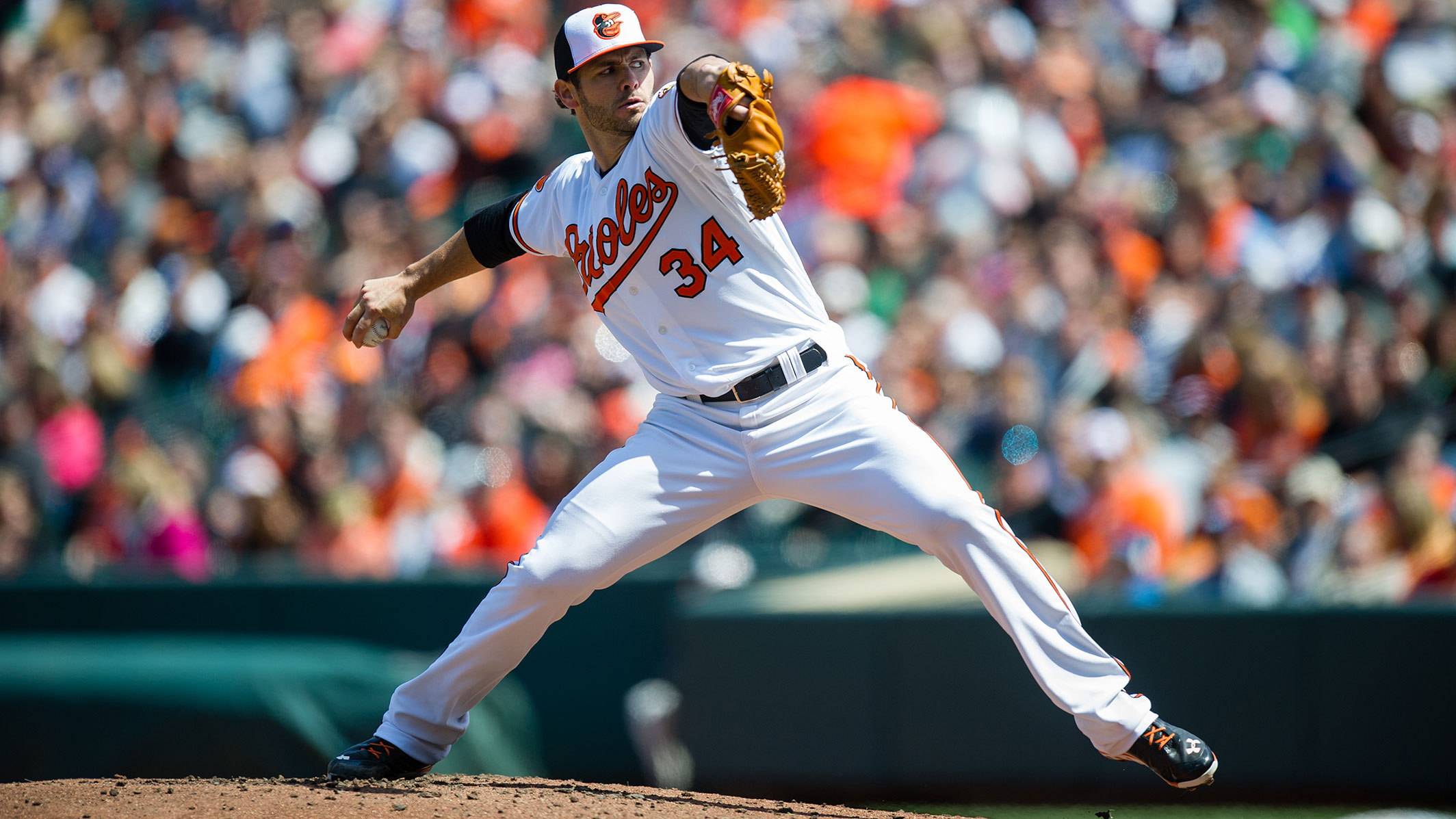 Rob Tringali/MLB Photos/Getty Images Jake Arrieta with the Orioles in 2013.

The Orioles picked Arrieta in the fifth round of the 2007 draft, then watched him flourish early in his minor league career. Between his 2008 and 2009 seasons, spread across the Class A, Double-A, and Triple-A levels, Arrieta tossed 263.2 innings, punched out 268 batters, and allowed just 222 hits. Baseball Prospectus named him the 52nd-best prospect in the game before that 2009 season and no. 70 the following year. When Arrieta started the next season with a 1.85 ERA in 73 innings at Triple-A Norfolk, the O’s called him up to the big leagues.

That moment marked the peak of his Orioles career. In 358 innings spanning 2010 to 2013, Arrieta delivered a hideous 5.46 ERA. His command — 159 walks, or more than four per nine innings — was atrocious. He gunned his fastball into the high 90s and owned a heartbreaking curveball that at times would look like one of the game’s best, but he still couldn’t get anyone out at the major league level. On July 2, 2013, the O’s dumped Arrieta on the Cubs (throwing in hard-throwing reliever Pedro Strop and cash to boot) in exchange for journeyman right-hander Scott Feldman and seldom-used catcher Steve Clevenger.

The changes began immediately. In his first start as a Cub, Arrieta leaned far more heavily on his sinker than he ever had before, throwing 48 of them out of 93 pitches in his debut start against the Brewers. He walked three batters and struck out two, but he also allowed just one run on two hits that night, inducing lots of weak contact. Arrieta made eight more starts with the Cubs that year, producing four terrific outings (1.01 ERA) and four rough ones (8.05 ERA).

In 2014, Arrieta’s pitch mix continued to evolve. After using his four-seam fastball 35 percent of the time in 2011, he used it just over half that often three years later. He also started throwing his slider more, ramping it up to a career-high 29 percent usage rate. The pitch had elements of a cutter, and some have argued that it resembles more of a hybrid slider-cutter offering — inelegantly called a “slutter.” Whatever the name, that pitch became Arrieta’s needed third weapon. Take a look at opposing hitters’ heat map against it last year, and you see an ocean of icy blue — especially for lefties: 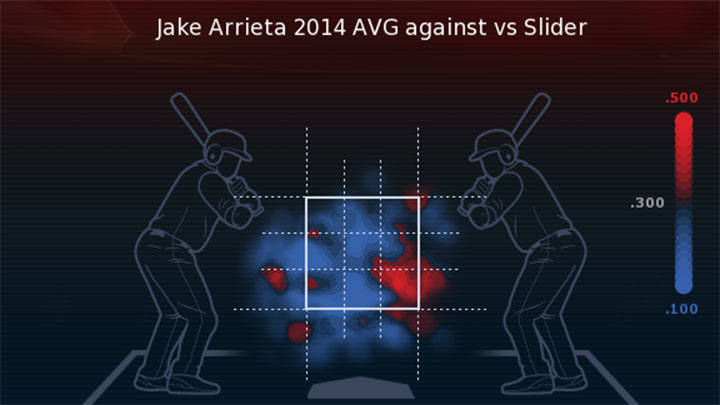 Of course, adding a successful third pitch can help any pitcher get a lot better. But that slider — and Arrieta’s other pitches — became so effective in the first place because of base-level changes to both his mechanics and process.

In 2014, Harry Pavlidis detailed Arrieta’s transformation for Baseball Prospectus. His pitches began hitting the strike zone more often — especially in parts of the zone that hitters couldn’t touch with any authority. So, why the improvement? Pavlidis shot a few videos of Arrieta throwing under the watchful eye of Cubs pitching coach Chris Bosio. You can see Bosio working with Arrieta on his balance, particularly as he breaks his hands apart and starts to shift forward in his delivery. And in an MLB Network Radio interview from the same year, Arrieta talked about making sure that his shoulders were level, he wasn’t leaning back toward second base in his windup, and his left leg was moving down before he started shifting his weight toward home plate — all elements he worked on with Bosio.

Those subtle changes have paid off in a big way. In 2014, Arrieta grew into one of the best pitchers in the league, posting a strikeout-to-walk rate of better than 4-to-1 and allowing a ludicrously low five homers in 156.2 innings. Hitters couldn’t do anything with his slider (.191 batting average, .274 slugging) or his curve (.152/.229) that year.

Somehow, it was all just a prelude for the destroyer of worlds he’s become in 2015. The final step in Arrieta’s progression was to coax better results out of his sinker, which began to rival what he was doing with his nasty breaking pitches. After batting .276 against his sinker last year, opponents have hit just .199 against it in 2015. This was the culmination of Arrieta’s trifecta of velocity, command, and movement: He could now put that pitch just about anywhere he wanted at any time, the same way he commanded his devastating slider and curve. The result was a spike in Arrieta’s ground ball rate to 56.2 percent, the highest mark of his career and the third-highest among qualified NL starters.

While it’s hard enough for opponents to crack any of Arrieta’s pitches for hits, little damage has been done even when hitters do make contact. They slugged just .277 against his sinker this year … and that was the highest slugging percentage they could muster against any of his three primary pitches. 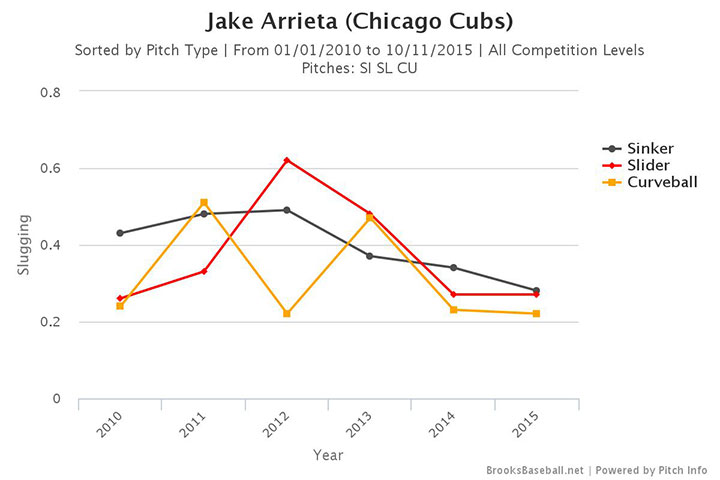 The rest of the story is one of pure dominance. But just how dominant has Arrieta been, historically?

There was Sandy Koufax, whose final eight regular-season appearances in 1965 yielded 54 innings, a 1.17 ERA, and a perfect game; he followed that by allowing one earned run in 24 World Series innings, including a series-clinching three-hit shutout in Game 7 on three days’ rest. There was Bob Gibson, who put up an 0.96 ERA in his final five starts of the 1967 season, then beat the Red Sox three times in the World Series, allowing three runs in 27 innings pitched. There was Orel Hershiser, who closed the 1988 regular season with a 59-inning scoreless streak, then won NLCS and World Series MVP honors, going 3-0 with a save and allowing five earned runs in 42.2 innings pitched.

And then there was Mike Scott in 1986. That year, Scott won the NL Cy Young Award, leading the league in innings pitched (275.1), strikeouts (306), ERA (2.22), and a host of other categories. His final 30 starts of the season were white hot: 263 strikeouts in 230.2 innings, a 1.87 ERA, and an opponents’ batting line of just .171/.225/.276. His last two starts that regular season went full nuclear: 16 innings, 21 strikeouts, and just two hits allowed, including a no-hitter on September 25 that clinched the NL West for the Astros — the only time in baseball history that a pitcher has clinched a playoff spot with a no-no. Scott’s combination of deadly heat and a brutal splitter — along with widespread belief that he was cutting baseballs with a foreign substance to make them dive out of the strike zone — messed with hitters’ minds that year. Facing the Mets in the NLCS, Scott threw a five-hit, 14-strikeout shutout in Game 1, followed by a three-hit, one-run complete game in Game 4.

As Rob Neyer recounted for ESPN.com in 2001, Scott’s heroics particularly got to All-Star catcher Gary Carter. Had the Mets not won that incredible, 16-inning marathon Game 6 to win the pennant, Scott was a good bet to extinguish their World Series chances the next day. “Mike Scott watched that sixth game from the Astros’ dugout, and he haunted us,” Carter said. “He stuck in the back of our minds. No, sir, we didn’t want to face him the following day for all the marbles … The man had a power over us even when he was spending the game on the bench.”

Battle-tested and seemingly unflappable, this year’s Cardinals aren’t likely to admit to that kind of fear against Arrieta. Still, as the NLDS shifts to Wrigley Field later today, there’s a quiet sense in the baseball world that the Cards will have to win Games 4 and 5, because how the hell is anyone going to hit Arrieta in Game 3?

If that overpowering Game 3 start does happen, and the Cubs can win one more in this series after that, those other names — Koufax and Gibson and Hershiser — will start coming up in every conversation about Arrieta. If this streak continues through to the Fall Classic, there won’t even be a conversation anymore: As far as dominant postseason pitchers go, Arrieta will stand on his own.

We Went There: USA-Mexico at the Rose Bowl