We Went There: USA-Mexico at the Rose Bowl 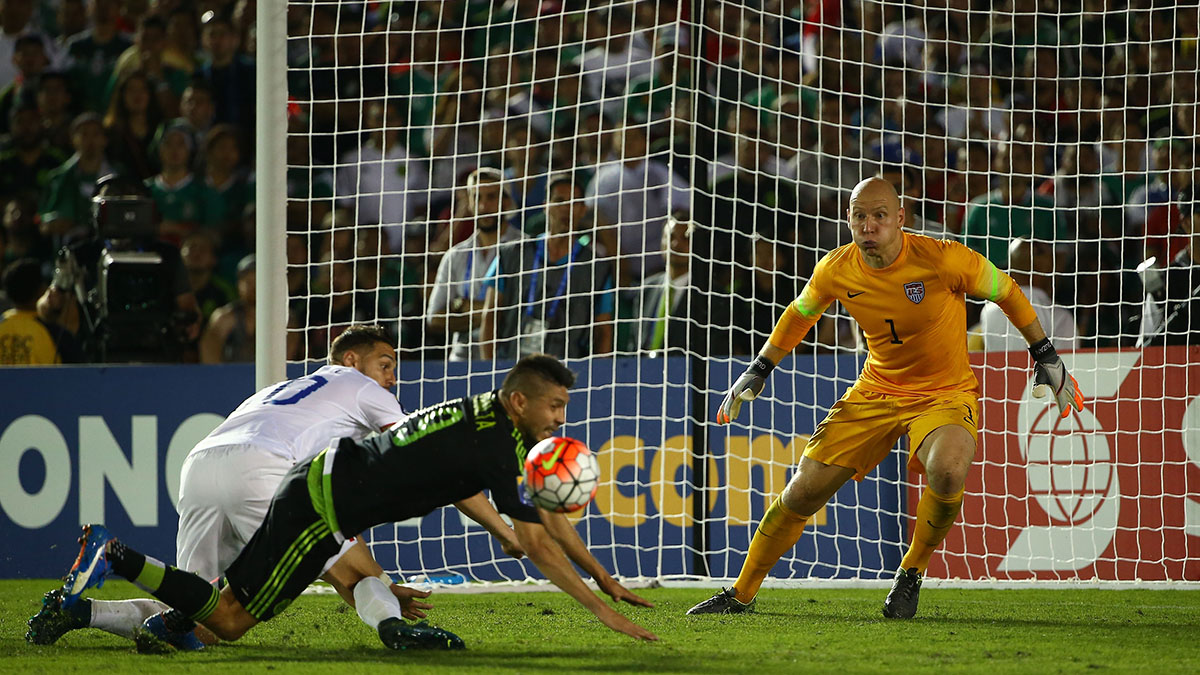 “Want to road trip to LA?” a friend texted me, and of course I said yes. “I’d LOVE to,” is specifically what I typed back. The U.S. men’s national team was facing Mexico in the Rose Bowl, in a meaningful game. The winner would go to Russia in 2017 for a World Cup dry run of some importance. I didn’t see how I could afford a 2,800-mile drive from Florida, where we both live, but my friend was persuasive. “I have a Prius,” he texted, adding, “Let’s have an adventure!” At some point into our first day of driving, as we crossed over from Louisiana into Texas, I felt my first pang of doubt. To the game and back required a week of my time. Even in a car with stellar gas mileage, I would be spending a lot of money. Should we care this much? Were we taking the game more seriously than the American team?

“It’s not a Phish concert,” another friend said when he heard about the trip. “It’s just a soccer game.”

That’s not what it felt like Saturday, when Mexico beat the United States, 3-2, in extra time. It was a thrilling match that broke my heart and reaffirmed my love for the USMNT. But the loss felt deserved, and it cemented 2015 as the American team’s annus horribilis. Head coach Jurgen Klinsmann failed to achieve his clear objectives for the year. After the game, it was hard to tell how much that mattered to him. In a press conference deep inside the stadium, Klinsmann postured as if the loss were just unlucky — a bummer, but not a big deal.

“I think it was an incredible experience,” he said of his biggest defeat as the U.S. coach. “It was full of excitement; it was full of intensity.”

The game was set up as a knockout match of sorts, for Klinsmann most of all. This one-game playoff for a Confederations Cup berth was made necessary when the U.S. failed to win this summer’s Gold Cup. Klinsmann’s U.S. team finished in fourth place, losing to traditionally weaker teams from Jamaica and Panama. The previous U.S. coach, Bob Bradley, lost his job after he lost a Gold Cup final. Mexico fired its head coach this year after winning the tournament, in large part because he didn’t win impressively enough.1 Shouldn’t that kind of pressure be applied to Klinsmann, too? Former national team star Landon Donovan felt so, saying that if Klinsmann failed to qualify his team for the Confederations Cup, then he should be out of a job.

I wasn’t sure how I felt about Klinsmann as we continued across the country. We eventually crashed at an Airbnb in Brentwood, and the following day we got to Pasadena a couple of hours before kickoff. Our car thermometer indicated it was 100 degrees outside. Traffic heading into the stadium felt brutal, with more than 93,000 fans clogging the same roads and most everyone wearing Mexico jerseys.

This, too, was expected. Mexico is the most popular national team in the United States, right? It plays almost all of its friendlies here, selling out stadiums in Dallas and New York and San Francisco. When we finally found parking, we opened our doors to oompah tubas blaring out banda standards. American fans huddled in a zone walled off from the sea of Mexican fans. Inside the zone, former U.S. national team player Frankie Hejduk asked if anyone was ready to get weird tonight. Define “weird,” I thought as we walked past, preferring to swim among the enemy. I saw heavy drinking. I saw taunting — Mexico won that Gold Cup trophy and was the favorite to win Saturday’s playoff. But I didn’t feel hostility. USA versus Mexico is as good as it gets for Mexican fans, too. We all felt lucky to be there.

I’d been lucky enough to be in Estadio Azteca in Mexico City in 2012, when the United States won in Mexico for the first time. That win remains a big reason I’ve continued to like Klinsmann, even as his detractors grow in number. It may have been just a friendly at the Azteca, but he showed his players that it was indeed possible to win in Mexico. A subsequent friendly road win over Italy showed that it’s possible for us to beat a superpower, too. Even in this terrible year, Klinsmann led the U.S. to first victories over the Netherlands and Germany, with each winning goal scored by Bobby Wood, a young forward who Klinsmann has begun working into the lineup. Yes, these wins make Klinsmann the champion of games that don’t matter. But I believe that those wins still helped the national team grow.

At kickoff, American fans were not invisible. There were far more Mexican supporters, yes. And when those Mexican fans unfurled a tifo — a huge banner — recognizing their country as the reigning rivalry kings during the national anthems, I thought the American supporters would look small and weak in comparison. Yet the American Outlaws unfurled a tifo of its own. The portrait of Klinsmann above the words “To Russia With Love” can be recycled in November when World Cup qualifying starts, but still. We had a tifo. The support for the American team was notable, visible, and vocal even in the Rose Bowl. At least until Mexico scored, less than 10 minutes into the game.

It looked way too easy. The two most accomplished Mexican players, Oribe Peralta and Chicharito, slipped behind the American defense and then slipped the ball past keeper Brad Guzan. It was such a good goal, so sharp and professional and dominant, that I worried the game was already over. When the Americans came back just minutes later with a strong equalizer — Geoff Cameron heading in a Michael Bradley free kick — I was reminded that this is a team worth believing in. Even if it was being outplayed, which it was, it kept fighting. The Americans have the talent to win games, like they did in Germany. Like they did in the Netherlands. Like they did at the Azteca.

At halftime, with the game tied at one, the groundskeepers overwatered the pitch. Play bogged down in the second half, neither team scoring. A fight broke out at one point. In the first short period of extra time, Peralta scored a sharp goal of his own, which looked like the decider. Yet, again, late substitute Wood scored a clutch and exhilarating goal to equalize. The American Outlaws broke into that chant, believing the United States would win. Klinsmann began preparing for a penalty-kick shootout. He, too, believed the USMNT could win. Then Mexico scored one more goal, a true killer. When Paul Aguilar’s volley beat Guzan, Aguilar ran over to the sideline, theatrically diving into one of the advertising signs ringing the field. His teammates smothered him in hugs. Not long after that it was over. A podium was rushed to midfield. Mexican players stepped onto it, the undisputed champions of North America.

Earlier in the day, in the undercard to the Mexico game, the U.S. under-23 team failed to qualify for the next Olympics by losing to Honduras 2-0. That loss, like the Gold Cup fourth-place finish, was a clear failure for Klinsmann. He’s the technical director, hiring the coaches for the youth national teams and guiding how those teams play. Now he had personally lost to Mexico, too. He walked into the postgame press conference with his head bowed, looking sheepish, as if he’d just accidentally run over a neighbor’s dog. He sat down, resting his elbows on the dais before leaning toward the microphone to give an opening statement. Congratulations to Mexico on the win, first of all. What he said afterward came across as the equivalent of an arm-shrug emoji. Hey, what can I say, we lost.

“I don’t want to make excuses,” Klinsmann said, before bringing up poor refereeing that he feels handed Mexico the Gold Cup. He noted that his American team enjoyed good years in 2012, 2013, and at the World Cup last year. “This year not so good,” he said. “That’s part of it.” All part of the process. A reporter from a Spanish-language TV station asked Klinsmann what he would say to the ex-players — Landon Donovan! Landon Donovan! — who believe he should quit if he lost to Mexico.

“I don’t need to say anything to them,” Klinsmann replied. “Not everybody likes you. That’s totally fine. I’m here to do a good job.”

When he does a bad job, that’s totally fine, too, I gather. He’s not going anywhere and he knows it. On the Fox Sports pregame coverage, former player Alexi Lalas declared Klinsmann and the national team to be married through the next World Cup. Former national team keeper Brad Friedel concurred. The only way Klinsmann gets the ax is by failing to qualify for Russia, which is almost impossible at this point.

The press conference ended quickly, with Klinsmann ducking under an exit sign as he stepped out the door. We walked back to our Prius. Mexican fans played pickup soccer in the parking lot, diving to the ground after a goal as if they’d just scored a game winner against the United States. A guy in a green jersey jogged past, chanting, in English, “I believe that we just won!”

My friend and I got right back on the road for the long drive home to Florida. We’re in New Mexico as I type this. We’ve got another day and a half before we reach Miami. I’m glad we saw the game. I’m still a proud fan of the U.S. team. Since it’s clear Klinsmann is here to stay, I can only ask him to do a better job. My opinion of his leadership grew more negative than I’d expected on the drive out. If anyone wants to criticize him, I won’t say a word, not until he beats Mexico again, in a real game.

Robert Andrew Powell (@robertandrewp) is a contributing editor at Howler and the author of three books. He lives in Miami.