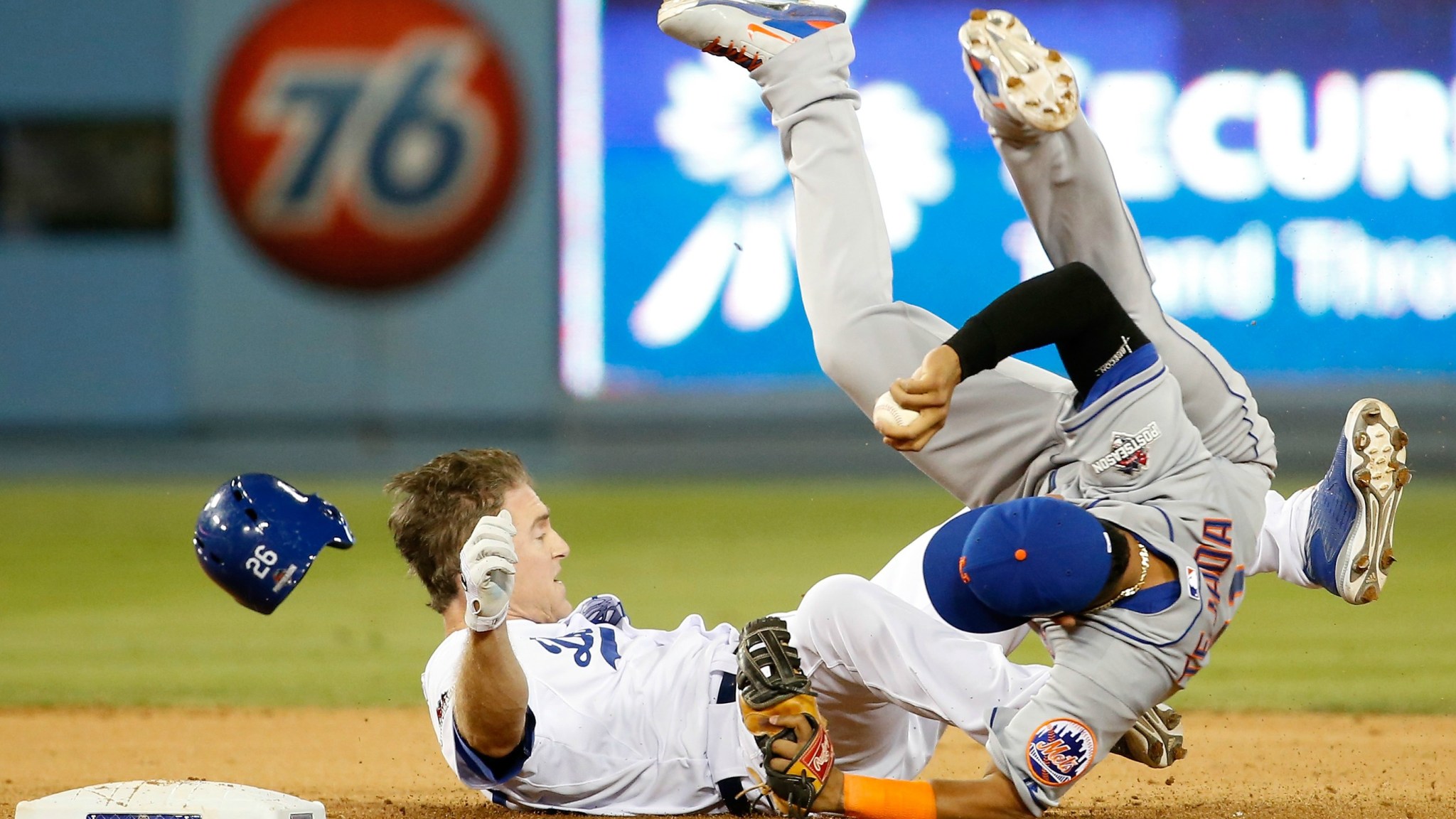 There are FOUR PLAYOFF GAMES today! That’s a [reggaeton horn] and [Inception noise] of [10-hour loop of Epic Sax Guy]! And if you think that’s a lot, there was even more baseball over the weekend! Here, in as brief a recap as is practicable, is how all of that shook out.

Well, in a just world, we’d be talking about Jacob deGrom’s comprehensive dominance or Noah Syndergaard redrawing the boundaries of what we can expect in terms of velocity from a starting pitcher. We’d be talking about Zack Greinke being the best no. 2 starter in baseball, or how watching Bartolo Colon jog in from the bullpen in all his moonlike glory is a sight to warm the hearts of nations.

But because baseball is a sport for people who like to suffer, we’re instead going to talk about Chase Utley’s takeout slide in Game 2. It was one of the most brutal and unnecessary acts of violence I’ve ever seen during the run of play in a baseball game. He came in late, off the base, and straight into Ruben Tejada’s extended plant leg, breaking his fibula. The slide was so vicious that it divided the ranks of former pro ballplayers, a group of people who apparently unanimously support choking out one’s coworker on television. If a play is borderline for them, it’s beyond the pale for normal people. This isn’t football, which is a shame, because in football, they give you a 15-yard penalty for clipping or roughing the whoever instead of giving you second base.

Utley has been suspended for two games, and public opinion is divided between people who support the suspension or want harsher discipline and people who think either (1) that MLB moved the goalposts by deciding all at once to punish hard takeout slides after not having done so for 150 years, or (2) that suspending Utley is an attempt to quiet public criticism rather than to make the game safer.

While I’m in favor of suspending Utley, who is appealing the ruling, I’m also sympathetic to the counterarguments. Certainly we don’t want arbitrary post hoc justice, such as it is in matters of on-field rule-breaking. And, further, we’d prefer the league to protect players out of a sense of right and wrong rather than the desire to avoid criticism.

To the second point, I’d say that if someone does the right thing, I don’t really care what his motives are. Neither is it a bad thing that MLB is responding immediately to criticism that its game is not as safe as it could be — certainly being responsive to such things is good. And it looks like after this and a rash of other recent incidents, dating back to Jung Ho Kang’s season-ending injury last month, that MLB will not only suspend Utley but change the rules governing slides.

To the first point, that suspending Utley goes against rules and/or precedent, I guess my response is that I don’t really give a shit? If rules and precedent are the last fallback of people who defend such an obviously violent and un-baseball-like action, then maybe we ought to rethink the rules and precedent now, instead of waiting for the next broken leg. Established institutions are not intrinsically good — they are only as good or bad as the ends they service.

Before Beltre’s replacement, Hanser Alberto, drove in the game-winning run on Friday, though, the Jays had reason to hope: Starting pitcher Marcus Stroman provided an obvious jolt of energy for a team that could’ve packed it in after falling behind early. Donaldson homered, and the Jays actually led for most of the game before Brett Cecil, in an unfavorable matchup against Mike Napoli, allowed an inherited runner to score, then injured himself while chasing Napoli in a rundown.

After that, the game remained scoreless until Ross Ohlendorf and LaTroy Hawkins were the pitchers of record, and once things get to that point, you have to stare quite deeply into the abyss indeed in order to draw conclusions.

But having had a day off to collect themselves, the Jays jumped on Martin Perez on Sunday night, and extended their lead with a three-run Troy Tulowitzki homer. Now, they’re a game away from going home to clinch the series behind David Price.

St. Louis went pretty much wire-to-wire on Friday night, as Matt Holliday singled in a run in the first inning and John Lackey went 7.1 innings while allowing only two hits and no runs. In the eighth inning, the Cardinals got some insurance in the form of home runs from Tommy Pham and Stephen Piscotty, both of whom were playing in their first postseason game. Piscotty’s 2-for-4 was particularly welcome, as it was only his second game back after a horrifying outfield collision with Peter Bourjos in the last week of the regular season.

The next afternoon, however, St. Louis replaced its successful “hit home runs and throw a shutout” strategy with a less successful game plan of throwing the ball indiscriminately around the infield. The Cardinals went up 1-0 on a Matt Carpenter home run, then allowed five runs in the top of the second, largely without the Cubs hitting the ball out of the infield. Between Starlin Castro’s leadoff single and Jorge Soler’s home run, Austin Jackson reached on a fielder’s choice and a throwing error, stole third, and scored two batters later thanks to an absolute defensive vapor lock by Cardinals pitcher Jaime Garcia.

Cubs pitcher Kyle Hendricks, up with men at the corners and one out, laid down a squeeze bunt right to Garcia, who fielded it with his back to home and threw to first base without looking at Jackson. If he had, he’d have realized that Jackson was barely halfway down the line and would’ve been out by 10 feet had Garcia thrown home. Instead, Garcia threw to first, which is not to say that he successfully delivered the ball to the first baseman — his overthrow landed Miguel Montero at third and Hendricks at second, and those runners scored on an Addison Russell squeeze and a Dexter Fowler single, respectively, before Fowler himself scored on Soler’s home run.

Anyway, you tend to win if you hit home runs, and you tend to lose if you make a lot of throwing errors.

The Astros were so close to having this wrapped up already. On Friday, they were up 4-2 entering the bottom of the sixth behind a decent outing from Scott Kazmir, who’d looked awful over the past month. But instead of cashing out and going to his bullpen immediately, manager A.J. Hinch waited until Lorenzo Cain doubled to call on his relievers, at which point things got worse. Erstwhile LOOGY Oliver Perez faced two lefties and a switch-hitter and retired none of them, so Hinch replaced him with Josh Fields.

Fields somehow managed to walk Salvador Perez on four pitches, with the bases loaded and the tying run on third. I’m not the world’s leading expert on the Royals, but I’d always assumed that in any span of four pitches, Salvador Perez would get bored and swing at one. Apparently not.

Fields got out of the inning tied, but after that, it didn’t matter much: If the game is tied or the Royals are leading after six innings, Ned Yost can go to Kelvin Herrera, Ryan Madson, and Wade Davis and just sit back with a frozen adult beverage and wait for the game to end, because nobody scores off the Royals’ top relievers.

And sure enough, that’s what happened: The Astros never scored, and a Ben Zobrist RBI single off Will Harris — who has the peculiar distinction of having the same name as the county in which he plays his home games — wound up being the difference.

Now, if Fields and Perez hadn’t had their little sixth-inning adventure, and Sunday’s action had still unfolded the way it went on to unfold, the Astros would be in the ALCS.

After flailing away for four innings against a locked-in Edinson Volquez, the Astros broke through for two runs in the fifth and one each in the sixth and seventh en route to a 4-2 victory in Game 3. The key was Dallas Keuchel, whom Kansas City managed to wound but not kill. The Cy Young hopeful threw seven innings and a season-high 124 pitches of one-run ball, striking out Cain — who’d homered off him in the fourth — with his final pitch.

Meanwhile, Colby Rasmus continued to enjoy the best week of his, or anyone’s, life. He homered again on Friday, and while he couldn’t keep his streak going on Sunday, he did walk three times and hit a single off the ceiling in the former Enron Field, much to the consternation of several Royals defenders, to say nothing of Carlos Correa, who was between first and second at the time and had not given adequate forethought to the possibility that a ball might go over his head and then come back toward him without anyone touching it as he was running the bases. For sheer humor and absurdity, that was my favorite play of the weekend.

Houston, by the way, seems quite happy to have playoff baseball back after a nine-year absence, and the Astros will have a shot to clinch on Monday in front of a home crowd that, dressed predominantly in orange and clapping with orange ThunderStix throughout Game 3, looked collectively like the world’s loudest sea anemone.