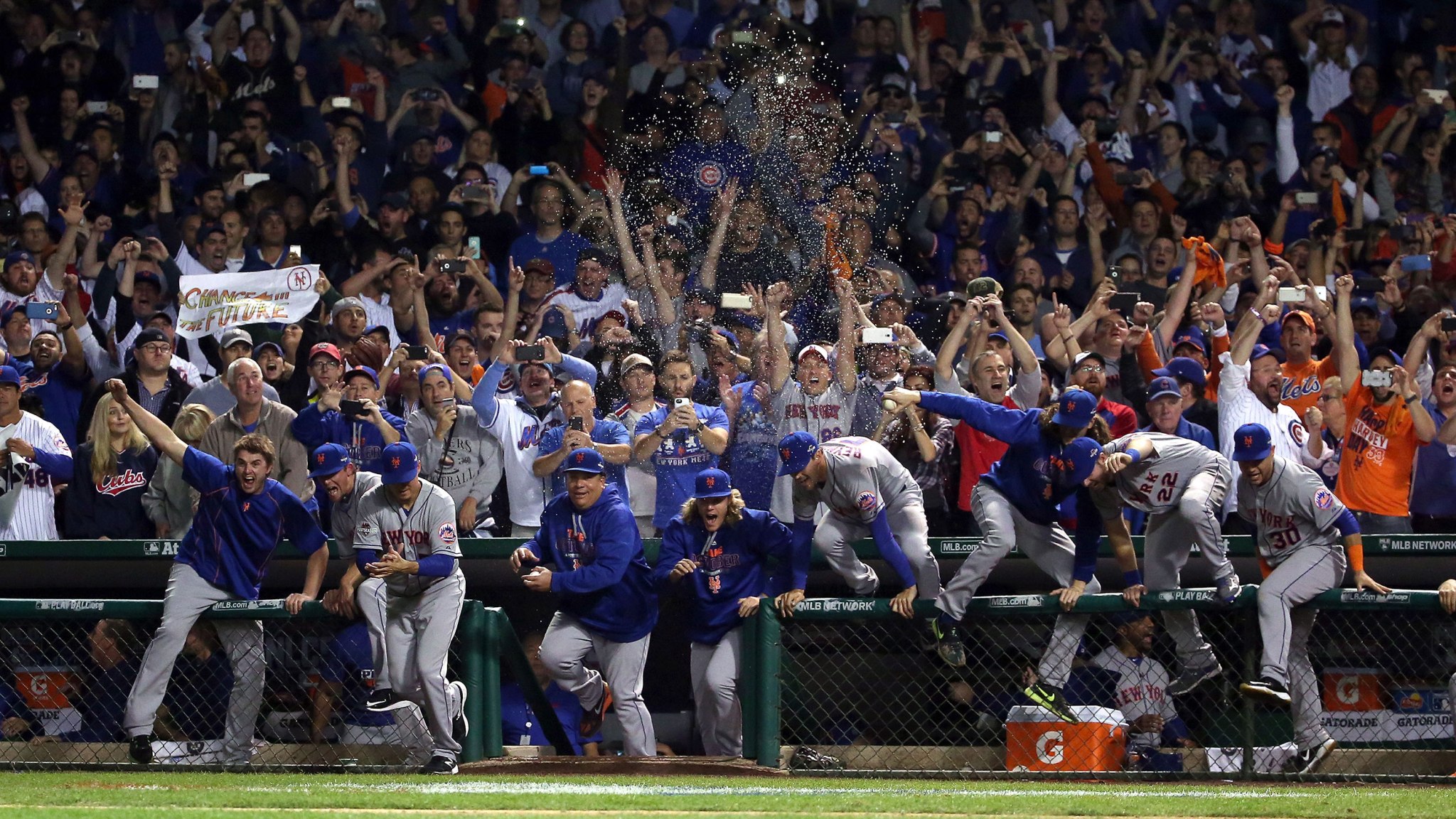 Some people still believe that performance in sports is the revelation of moral character, that some players transcend their normal abilities in high-pressure situations because they’re made of sterner stuff than normal humans. This is, of course, patent nonsense, but it’s something that Marco Estrada makes me want to believe.

Until this year, Estrada had been a more or less anonymous pitcher for the Milwaukee Brewers. In his last four seasons, he’d bounced between the rotation and the bullpen. He’d never posted an ERA+ greater than 113 or less than 87, nor had he ever qualified for an ERA title. He was mostly known for giving up bucketloads of home runs, but apart from that, he was a back-end starter on a not particularly well-discussed team.

While Estrada easily had the best season of his career in 2015, and while he’d pitched well, on balance, in his first two postseason starts, the Blue Jays were still placing their season in the hands of a fairly nondescript 32-year-old. 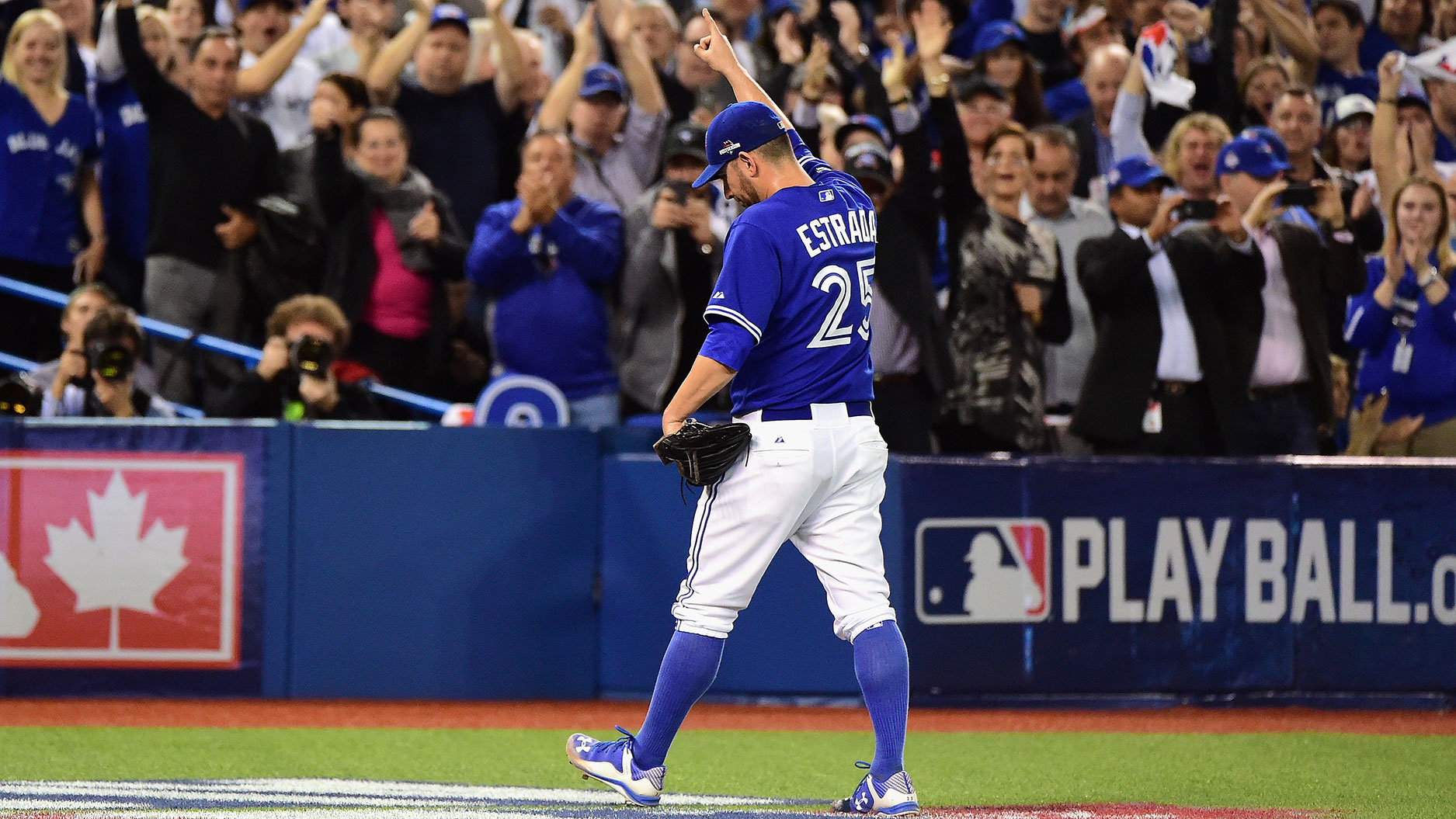 And he hardly could have pitched better. Estrada was perfect through three innings, faced the minimum number of batters through 6.2, and allowed only one hit and no runs through 7.2 before Salvador Perez opened Kansas City’s account with an opposite-field home run.

Estrada calmly, almost sleepily, shut down a Kansas City offense that had scored 22 runs in the first two games in Toronto. He relied on a fastball which, while neither particularly hard nor particularly lively, was expertly located throughout his outing. Most importantly, it set up his changeup, which looked like what the fastball would look like if you cut open the baseball, dumped out the cork-and-string innards, and replaced it with a handful of lead shot.

It was a superb performance in both quality and quantity, and the Blue Jays, thanks to a bullpen decimated by two days of relentless abuse, needed every out.

This was particularly true because Kansas City’s Edinson Volquez continued his streak of remarkable postseason performances. With his countryman and former Reds teammate Johnny Cueto suffering from a conspicuous lack of consistency this postseason, Volquez has picked up the torch and pitched like a no. 1 starter.

It’s like Volquez left a couple of mph of fastball velocity in his pants pocket over the summer, then found them while doing laundry two weeks ago. As he cranked his fastball up to 98 mph and backdoored heater after heater to right-handed hitters, Volquez suggested that lightning does sometimes travel in a straight line.

The Blue Jays couldn’t hit Volquez in Game 1, and a solo home run from Chris Colabello notwithstanding, they didn’t hit him in Game 5, either. What undid Volquez was that, come the sixth inning, he was no longer locating the head of a pin with a Wiffle ball. All of Toronto’s first four hitters — Ben Revere, Josh Donaldson, Jose Bautista, and Edwin Encarnacion — know their way around the strike zone, and on the third trip through the order, they were more than willing to let Volquez put them on base.

None of those four put a ball in play, but all four reached off Volquez and later scored. Revere walked on seven pitches; Donaldson took a first-pitch fastball off the arm; Bautista worked a 10-pitch walk on a curveball that might not have actually missed the strike zone; and Encarnacion took three straight two-strike pitches to bring home Revere. Apart from the ball that hit Donaldson, seldom did Volquez miss the zone by more than a couple of inches. But while strike zone calls can be controversial — or even incorrect — they are binary and irrevocable, so Volquez coming so close to getting strike three on those Blue Jays probably isn’t that comforting.

After Encarnacion walked, Kelvin Herrera replaced Volquez, and two batters later, Troy Tulowitzki’s bases-clearing double made it 5-0, which pretty much signaled the end of the line for the Royals in Game 5.

There will be a transcontinental storm front of extravagant prose about the importance of Estrada’s start. And considering the various factors — the must-win status, how well Volquez pitched, and the hovering temptation to use presumptive Game 6 starter David Price in relief had Estrada struggled — it’s hard to be hyperbolic about what he did. By giving one of the best performances of his career in the biggest moment of his career, Estrada saved Toronto’s season. 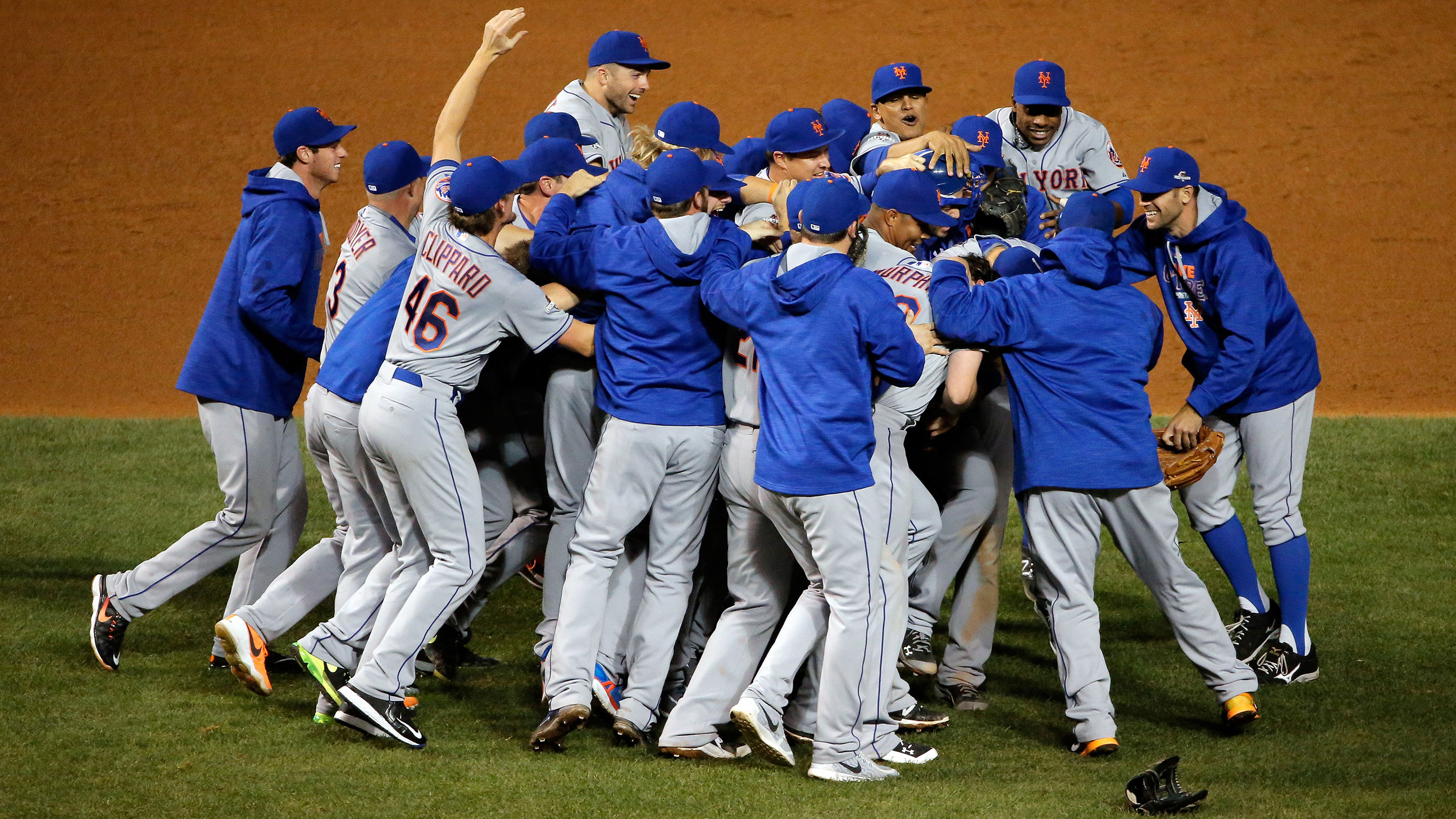 “We were one strike from getting out of the inning,” reads the epitaph of the 2015 Chicago Cubs.

Jason Hammel had two outs in the bag — including Daniel Murphy, who has become worth noting — and two strikes on Lucas Duda in the first inning. Then he tossed a 94 mph fastball knee-high over the outer half and watched it come back in his direction as completely as a Celine Dion power ballad, all the way out over the center-field wall for a three-run homer. The next eight and a half innings were little more than a victory lap.

On the day, according to legend, when Marty McFly traveled forward in time and witnessed a Cubs World Series victory, the Mets Biffed Chicago right in the Zemeckis.

The 8-3 victory ensures that, for the first time in history, the World Series will not involve one of Major League Baseball’s original 16 teams. And coming in such close succession to the opening of Manhattan’s first stand-alone Chick-fil-A, the Mets winning the pennant makes it a hell of a month for New York City.

Travis d’Arnaud followed up Duda’s homer with an opposite-field shot of his own, and in the second, Duda doubled in two more runs. The offense stalled after that: Yoenis Cespedes left in the second with a shoulder injury, and Michael Conforto was pulled in a fifth-inning double switch, but Steven Matz and Bartolo Colon kept the Cubs from doing anything more than feinting at a comeback for the first six innings.

In the third inning, down 6-0, Cubs catcher David Ross caught a 1-1 strike with two outs and Matz at the plate. Apparently having forgotten the count, he then took off for the dugout, and he ought to have stayed there, because closing out a game like this, as it turns out, is kind of dangerous.

In addition to Cespedes’s shoulder injury, d’Arnaud was hit in the hand with a pitch, and Starlin Castro was hit first by a Matz breaking ball (which he also struck out on, to literally add insult to injury) and then by Javier Baez, who’d already collided with Wilmer Flores on a stolen base attempt before accidentally kicking his own double-play partner.

In the seventh inning, Tommy La Stella hit two catchers in the head with one foul ball, as his foul tip glanced off d’Arnaud’s mask and off to the on-deck circle, where Miguel Montero was waiting to take his turn and not expecting to take a baseball to the helmet.

While several of those plays brought the trainers out to the field, Cespedes was the only player whose injury took him out of the game, and even then, he’ll have almost a week to recover before the World Series begins next Tuesday.

Such a comprehensive and emphatic victory — both in the game and the series — is consistent with the way the Mets have played over the past three months. Go back even to midseason, and you’ll find a team that developed front-end starters in bushels but whose position players had either yet to bloom or had already turned to compost.

Then they traded for Cespedes and, at the last minute, didn’t trade Flores, and both, along with Murphy, evolved into the third-stage versions of themselves. Conforto and Matz came up, David Wright came back, and all of a sudden the Mets are sending a team to the World Series that is both distinct from and superior to the one that floated around .500 for much of June and July.

With so many new faces in key roles, and with New York having ascended to the game’s pinnacle in such short order, the Mets making the World Series is almost as unbelievable as veterans like Wright and Colon having never played in a World Series before. We’ll have the weekend to get used to the idea.