MLB Overnight: Jake Arrieta Gets Another Taste of Mortality 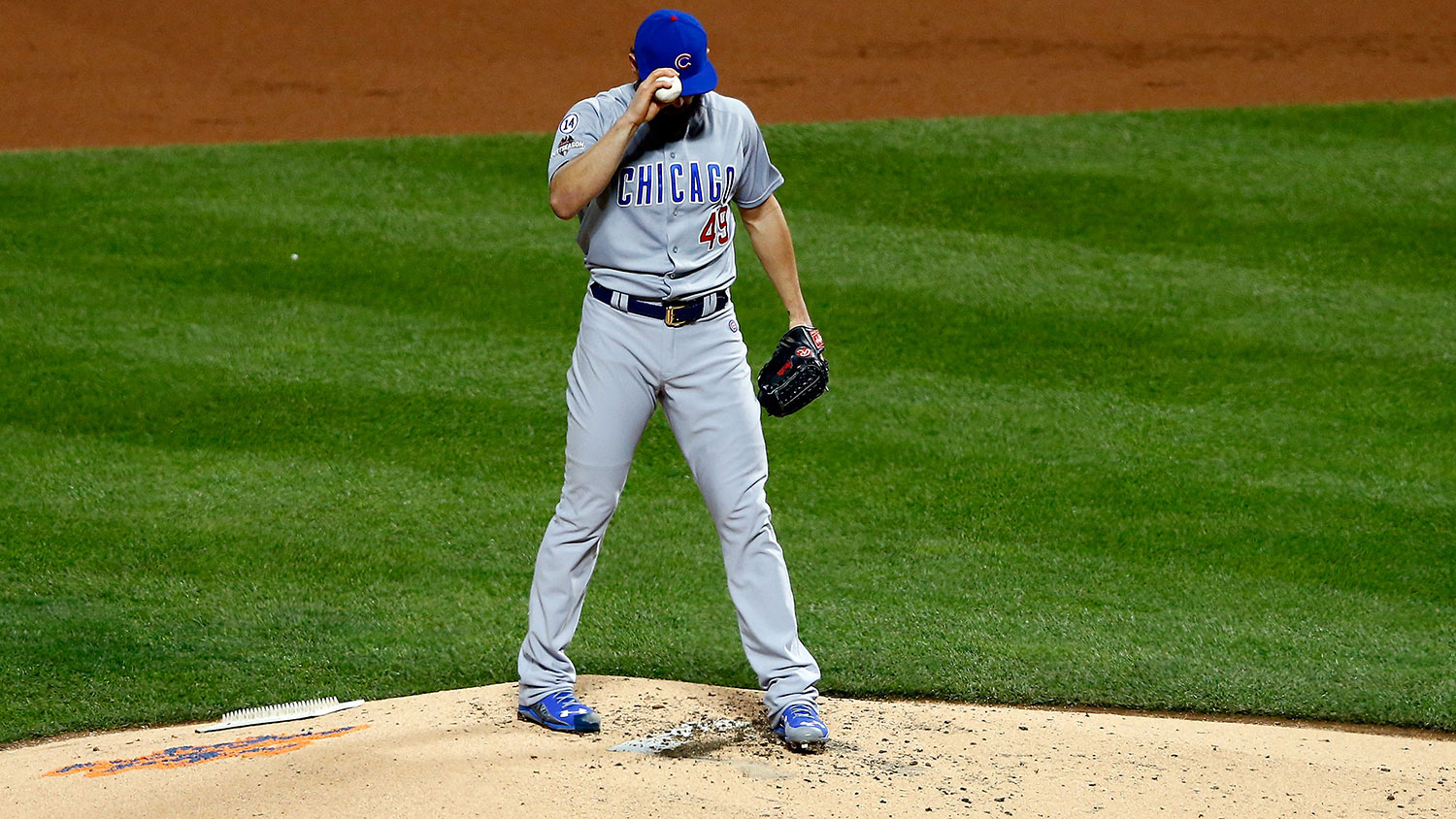 Just when everyone was getting used to the idea that Jake Arrieta might never lose a game again, there turned out to be a human being, as opposed to the God of Pitching, under that flat-brim hat and silly beard.

Arrieta was good — eight strikeouts against only six baserunners in five innings pitched — but “good” doesn’t measure up to the standard he’d created for himself with his second-half performance, nor was it enough for anything but a 4-1 loss that comes close to burying Chicago in the NLCS.

Arrieta allowed the first three batters he faced to score, including the latest home run in a storybook postseason for Daniel Murphy.

What a beautiful piece of hitting this is. In fact, let’s take a moment to consider this swing in more detail.

Arrieta pitches in a way that makes you very cognizant of air resistance. Ordinarily, we’re more intellectually than viscerally aware of the physical properties of air. Most of the time, air is the space between one solid thing and the next, and while we know there are little molecules floating out there, we don’t think about them as things that exert force.

But everything that Arrieta throws either is or feels hard. His pitches move perpendicular to the plate because the air in front of them just can’t get out of the way quickly enough, so what was once a gas is compressed into something that acts more like a solid, and the ball essentially bounces off the air. Which is, of course, how it actually works, but there’s a brutality to Arrieta’s pitches that drives the point home.

Arrieta got up on Murphy 1-2 and threw an absolute shit-ruiner of a curveball, which looked like a fastball until it ran out of clean air and took a sharp dive toward Murphy’s back foot. It looked like a hanger when Murphy started his swing, and when it became clear that this pitch was not only not a hanger but not even a strike, Murphy followed it to the ground.

This wasn’t a hip-snapping, fast-twitch home run swing, but a man following the path of the ball and flipping it, the way you’d flip a pancake when you’re an irredeemable showoff who’s making breakfast.

It’s consistent with Murphy’s October so far, in which he appears to have set out to hit a home run off every starting pitcher he faces, and which lines him up to be the latest in a series of Mets to rapidly and unexpectedly achieve folk-hero status in New York.

That three-run first-inning lead was more than enough for the Mets, as Noah Syndergaard turned in nine strikeouts in 5.2 innings. Syndergaard, whose hair certainly seemed at home in the wind, disappointed only those who expected him to come out and throw actual bolts of natural energy at hitters. Apart from the bottom of the first, the only excitement to speak of came when Curtis Granderson made a spectacular catch at the wall on Chris Coghlan in the second, and when Coghlan returned the favor on Yoenis Cespedes four innings later. Once Syndergaard left the game, four relievers kept the Cubs from mounting anything more than a head fake at a comeback, and Chicago’s vaunted offense is heading home having scored just three runs total over two games.

Optimistic Cubs fans will point out that the Mets didn’t do anything in the first two games other than hold serve, and the Cubs could very easily rediscover their form when they return to Chicago. If the Cubs do what the Mets just did — win their first two home games in the series — they’ll have Jon Lester back on the mound at home in Game 5, and if they win that, Arrieta will have a chance to clinch on Saturday, and that’s a good place to be.

But, because I don’t understand optimists, here’s the counterargument: The Cubs now have to win four of five to advance, and they’ve already burned their two best starting pitchers. Not only that, but as great as the Cubs were this year — and having the third-best record in baseball is nothing to take lightly — their pitching staff doesn’t exactly keep opponents up at night with its depth. Kyle Hendricks and Jason Hammel are solid big league starters, but “solid” isn’t that impressive when you grade on the curve of the playoffs, when only the best teams use only their best pitchers, and this is particularly true when you consider that Jacob deGrom will be on the mound for the Mets in Game 3.

Any realistic scenario in which Chicago comes back to win this series involves either a heroic performance from Hendricks or Hammel (or both) or a total offensive walkover. Given the way the ball flies out of Wrigley Field sometimes, Scenario No. 2 is not out of the realm of possibility.

Hammel and deGrom face off in Game 3 on Tuesday night, after which we’ll have a better idea of whether the series’ first weekend told the whole story, or just the character-building first act.

NFL Week 6 Takeaways: What the Snapfu?