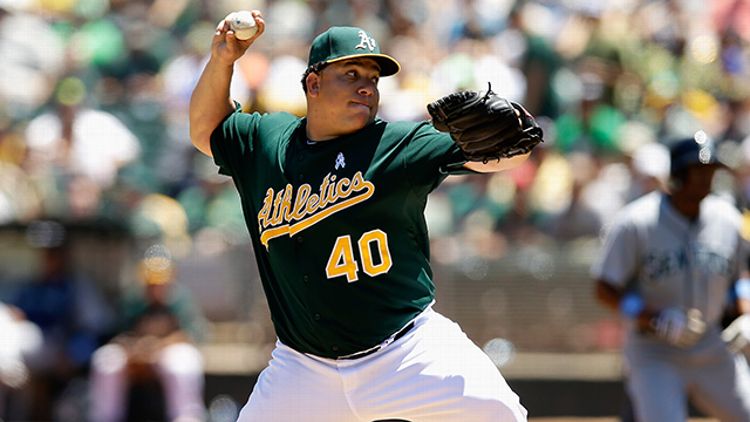 Two of the top starters in the American League meet Friday in Seattle. You could pair Felix Hernandez with several aces and make that make sense. Instead, this elite matchup will pit once lightly regarded Japanese import Hisashi Iwakuma against … Bartolo Colon. Or more specifically, the 40-year-old, 47-combined-starts-from-2006-to-2009, didn’t-throw-a-single-pitch-in-the-majors-in-2010 Bartolo Colon. This guy.

That guy ranks among the AL leaders in multiple categories — 10th in ERA, 11th in FIP, and 14th in Wins Above Replacement (and tied for second in wins, if you’re into that kind of thing). He’s on pace to post one of the lowest walk rates in baseball’s modern era.

Baseball is a game that practically begs you to root for unusual players, especially those who defy Father Time. When R.A. Dickey rides a faster knuckleball than anyone could remember to a Cy Young season just shy of age 38, we gasp. When Mariano Rivera looks as unhittable at age 43 as he did 15 years earlier, we marvel. So when Colon puts up phenomenal numbers at age 40, while carrying what’s surely one of the highest BMIs in the sport’s history and relying almost entirely on one pitch, that too should be cause for celebration.

Unfortunately, it’s not that easy in this case. Last August, MLB suspended Colon for 50 games for use of testosterone, a banned substance. Looking at Colon’s career path, from missing the entire 2010 season after shoulder surgery (following other major injuries to his elbow, knee, and back) to reemerging as a very good starting pitcher with the Yankees in 2011 and again with the A’s in 2012 and 2013, it’s not hard to draw an immediate link in your mind. With Colon’s name popping up again in the latest chapter of the Biogenesis case (albeit possibly for the same initial offense), that bias can and does intensify. (Though we’d throw a slight caveat that Colon’s fastball velocity of 90.2 mph the past two seasons is well behind 2011’s 91.7 mph as well as his pre–shoulder injury marks.)

Whether or not we can draw a straight line from PED use to Colon’s excellent performance, the fact is our stout friend has anchored an A’s pitching staff that ranks among the stingiest in the league, and he’s still taking the ball every fifth day. Beyond merely dismissing Colon’s success as the exclusive product of PED use, we figured it’d be instructive to see exactly what the big man has done to rise to the level of fringe Cy Young contender. Thanks to the research hounds at ESPN Stats & Info, there’s a lot to share.

One of Colon’s defining traits is his overwhelming reliance on his fastball. He’s thrown the pitch 84.5 percent of the time this season. We only have a few years of data on pitch usage, but Colon’s 84.5 percent is the highest fastball usage for any qualified starting pitcher since at least 2009. It’s not even his own personal high, though: Colon threw his fastball 89.2 percent of the time in 2012 and 90 percent of the time in 2009, both seasons in which he didn’t qualify for the ERA title. That kind of reliance on one pitch is basically unheard of for starters — it’s the kind of thing you really only see for relief pitchers. The most famous one-pitch pitcher of this generation is Rivera, whose ability to dominate the opposition throwing his cutter almost all the time is legendary. Yet Rivera’s personal highs for cutter usage (93.4 percent in 2012, 92.8 percent his year) sit just slightly above Colon’s. Think about that. A pitcher who routinely tops 100 pitches per outing is about as reliant on one pitch as the most recognizable one-pitch pitcher in decades, who also throws 10 to 15 pitches on most nights.

Until recently, Colon was on pace to do something even more unusual. In his first 70⅓ innings he walked just four batters. Since 1900, only one other qualified starting pitcher posted a lower walk rate than Colon’s then-rate of 0.51 walks per nine innings: Carlos Silva walked nine batters in 188⅓ innings in 2005, good for a 0.43 BB/9 IP rate. Colon’s walked six batters in 20 innings since, bumping his walk rate up to 1.0 per nine innings. That dropped him to second in baseball this year, behind Adam Wainwright’s 0.74. Still, if Colon maintains his one-walk-per-nine-innings pace, that would give him the 36th-lowest walk rate in the past 113 years.

Colon’s strikeout rate this year is an anemic 14.7 percent, or 5.2 per nine innings. On the plus side, Colon’s swing-and-miss rate has climbed to 6.1 percent, his highest number in five years. Despite his heavy reliance on the fastball, Colon’s secondary pitches have become far more effective this year, inducing 50 percent more swing-and-misses in 2013 than in 2011-12. Colon’s slider and changeup have produced not only more whiffs, but also a lot of outs:

Colon’s entire repertoire has been effective in inducing weak contact this year. ESPN Stats & Info tracks what it calls “hard-hit” balls in play. In 2011 and 2012, 21 percent of all at-bats against Colon ended in a “hard-hit” ball in play; in 2013, that’s dropped to 18 percent.

Slice and dice various counts and Colon looks good in nearly all of them. In 2011 and 2012 he allowed an aggregate on-base percentage of .268 with two strikes to lefties; in 2013, that OBP with two strikes has shrunk to .228. Thing is, Colon’s often looked good this season when behind in the count, too:

You can debate whether improved numbers with runners in scoring position are the result of skill, luck, or some combination of both. Whatever the case, Colon’s fared best this year in the toughest spots.

And yes, several factors indisputably beyond his control have helped too. This year, as is the case every year, O.co Coliseum has played as one of the friendliest parks in the league for pitchers. Oakland’s offense has been remarkably friendly itself when Colon pitches, though. Teammates provided 4.2 runs per game of support in 2011 and 2012 combined, and that includes the 2011 Yankees, who finished second in baseball in runs scored. This year, Colon’s collected 6.4 runs per game in support, ranking second among qualified starters behind only the Cardinals’ Lance Lynn.

Add it all up and you’ve got a 40-year-old, 290ish-pound (that might be generous), starting pitcher version of Mariano Rivera, dominating the league and leading the A’s to the third-best record in the AL. Love the story or hate it, the rise of Bartolo Colon is still one of the weirdest, most unlikely events of the season.