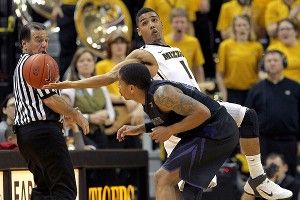 A couple weeks ago, I gave my philosophical treatise on why I think a regular-season title should be more highly valued. But philosophy is for the sheltered thinkers, and we are the salt of the earth. To become more relevant, and to lose its status as the forgotten title, conference titles in college basketball have to mean something. It’s a measure of sustained excellence, yes, but if we could just prove it had an effect on the biggest title of all, we could elevate the damn thing.

So here’s the question: What sort of predictive power does a regular-season conference championship have for a team’s performance in the Big Dance? Is it more or less important than a conference tournament title? Do either of them really matter?

When I set out to compile the numbers, I was mildly frightened. Sure, consistent brilliance over the regular season should indicate tournament success is forthcoming, but catching fire at the end of the season and winning a conference tournament could matter more. What’s better than being hot in March? The memory of Kemba Walker’s heroics in last year’s Big East tournament are fresh in our minds, and that particular surge didn’t end until UConn owned another national title.

To find out the most important title, I looked at Final Four and championship teams in the 12 seasons since 2000. Make your guesses now, amigos, because the numbers are about to fly.

(Note: When I talk about regular-season conference champions, I include the few teams who shared the title along with the teams who won it outright.)

Let’s start there. Right away, we see that a regular-season conference championship predicts Final Four appearances at a rate 22 percentage points higher than conference tournament championships.

(Sorry for the odd wording there, but as you’ll see below, it’s necessary.)

At this exact moment, I’m annoyed that the 90 minutes it took to find these numbers — try to find out who won the 2003 Conference USA title, expert Googlers — has only produced this much text. So please, digest that figure, send it to your friends and family, and tweet it out 300 times over the next hour.

And if anyone says “small sample size,” I might snap. Then cry. Then snap again.

The disparity is the most interesting number to take away, but there’s a bit more nuance to be explored. As we know, some teams win both titles and some teams win neither, so let’s go a bit deeper.

So if a team wins just one title, they’re almost three times more likely to reach the Final Four if it came in the regular season.

(Getting bored with numbers? Here’s a GIF of Duke center Mason Plumlee missing a dunk and falling over. Hope you enjoyed. Now, more numbers.)

We’re talking about minute differences here, but the numbers show that a team is more likely to reach the Final Four if they’ve only won the regular-season title (35.4 percent), rather than both regular-season and tournament titles (31.9 percent). I’m not the first to suspect that certain coaches (particularly ones who say “daggum”) seem to hold the conference tournament in low esteem. These numbers indicate there might be some wisdom to their disdain, though a more in-depth study would be handy here.

On the flip side, the numbers also indicate that it’s better to win no titles (19.1 percent) than to win just the conference tournament title (12.8 percent). It’s fun to consider that one — a real oddball — but the truth is that five of the nine teams to reach the Final Four without a title came from major conferences where another, better team from the same conference also made the Final Four. So the presence of more than half the no-title teams is essentially an indication that they were unlucky to be pitted against a certain juggernaut. There’s nothing inherently valuable about not winning.

HOWEVER, it’s fair to say that the numbers are roughly even; winning only a conference tournament is about as valuable as winning nothing.

Interestingly, the only mid-major team to make the Final Four without winning a regular-season or conference tournament title was VCU last season. In fact, when you look at that team’s résumé, it’s still incredible that it made the tournament at all.

But what about the championship game?

So we see that the trend continues into the final two. It narrows considerably when we look at national champions, but still holds up. Nine of the last 12 winners have been regular-season champs, and eight have won the conference tournament. Five won both, four won just the conference title, and three won just the tournament title.

So there you have it. Winning the regular season matters, and not just from a philosophical standpoint. Brackets are exciting, but the hype devoted to the major conference tournaments is inconsistent with how much they actually matter. Consistency over the long haul is more important, even in the chaotic rip tides of March.