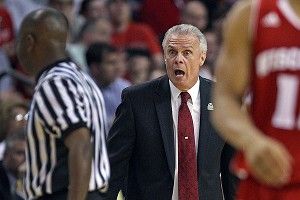 I bet you thought college basketball was over when Kentucky cut down the nets and pretended to enjoy “One Shining Moment,” didn’t you? Well, you were almost right. For about a month and a half after the title game, undecided high school recruits make their final visits, weigh the pros and cons of each school, gather with family and friends and crooked AAU coaches, and then choose Kentucky.

But seriously: The second signing period of the year lasts from April 11 to May 16, by which time all remaining recruits have inked a National Letter of Intent. It creates a healthy amount of suspense for college basketball fans who stick around, and in the midst of it all, you can usually count on a number of interesting transfers heightening the drama.

Let’s hit three of the big stories that have developed over the past 10 days, starting in Wisconsin.

Jarrod Uthoff was a redshirt freshman this year for the Badgers. The year before, he was Mr. Basketball in Iowa. Good player. But he decided he didn’t feel comfortable in Wisconsin’s offensive system, so he applied for a transfer. Under NCAA rules, programs looking at transfer players have to get permission from the player’s current school. If that school says no, the player can’t receive a scholarship at the new school.

In theory, a coach could deny permission to every single D-I school and be a real pain. In practice, the rule is meant to keep players from switching to rival programs. So it wasn’t unusual when Ryan put the rest of the Big Ten on the do-not-contact list. But it was unusual when he added Marquette, Florida, Iowa State, and the entire ACC.

(There’s an obvious joke to be made here, so I’ll make it: Bo Ryan can’t stop playing stall ball even after the season ends.)

Ryan had his justifications. Marquette is an in-state rival. The Badgers just signed a home-and-home with Florida. Most absurdly, the Badgers could theoretically play any ACC school in the Big 10-ACC challenge. As for Iowa State? No explanation there.

In reality, it was clear that Ryan was annoyed or even bitter about the transfer, and wanted to make life difficult for Uthoff. The fact that he supported his case with terse quotes like, “There are rules of a scholarship. I didn’t make them up,” makes the entire affair reek of petty retribution. There’s a reason it never happens — it’s not fair to the player, and it gives men like Ryan the power of a tyrant. In top-level NCAA athletics, when coach and program are already profiting from the player’s semi-free labor, this extra abuse is unseemly.

Uthoff went public, and Ryan drew a deserved swell of criticism. On Thursday, Wisconsin heard Uthoff’s appeal and removed restrictions for every school outside the Big Ten. In other words, Ryan caved or was made to cave by his administrators, a group that includes athletic director and former football coach Barry Alvarez. It’s a fair ending to a sorry story, but it revealed a side of Ryan that doesn’t favor him at all.

We’re in need of a timeline here.

March 16: Lehigh, a 15-seed, stuns Duke in the opening round of the NCAA tournament.

March 23: The news breaks that Austin Rivers, a freshman and Duke’s best player, will enter the NBA draft.

April 11: Shabazz Muhammad, the second-best recruit in the country and Duke’s top target, signs with UCLA.

April 16: Michael Gbinije, an athletic swingman and one of Duke’s best hopes for next season, decides to transfer. The news had been brewing for more than a week, leaked by unidentified sources, but Duke coaches apparently didn’t learn the news officially until the weekend.

Thursday: A message board rumor claims that Duke guard Andre Dawkins has been kicked off the team for a violation of the code of conduct. The rumor gathers such steam on Twitter that Duke is forced to release a statement, clarifying that Dawkins is still a member of the team, but that he might redshirt next season. It would be an understatement to call this a strange development; Dawkins would be a senior next season. His career has been erratic — brilliant at times, stagnant at others — and speculation about his relationship with Coach K has been rampant for three years. His father told the News & Observer that Dawkins is still working through the grief of a car crash that killed his sister in 2009, which is the root of his possible redshirt next season.

Over the next four days, the situation at Duke could become a whole lot better or a whole lot worse. Duke’s only piece of good news during the past month — that Mason Plumlee will return to the team for his senior season — might actually be a curse in disguise if it costs them Amile Jefferson or Tony Parker, their top two power forward recruits. And the Plumlee news is already tinged with negativity; it came with a complaint from Plumlee’s high school coach that Duke is using him incorrectly as a mere “screen-setter, shot blocker and rebounder.”

Parker and Jefferson are an interesting microcosm of a serious problem that has plagued Duke for nearly a decade — the inability to recruit a prominent big man. Rumors have abounded over that time that big men won’t attend Duke because the school is a guard factory and there’s some hesitation about the fact that the interior coach is Steve Wojciechowski, a former guard who stands 5-foot-11. When Parker gave ESPN’s Jason Jordan access to his inner circle during the decision process earlier this year, these rumors were given a nudge toward truth. This excerpt in particular put a button on the problem, and was some of the worst recruiting PR Duke could possibly receive:

His chief concern is one that Parker says “everyone thinks.”

“Just the development of their big men is something that concerns me,” Parker said. “People think I hate Duke. That’s crazy. Love Duke, it’s just something I have to factor in.”

Parker has thought about this extensively.

He reels off a list of names of supposed “can’t miss” prospects in high school who never lived up to the hype in Durham, N.C.

“Mason was a monster in high school,” Parker said. “Don’t get me wrong, he’s really good now, but I thought he would be much further along.”

“What about Chris Burgess,” Glover said.

Burgess was a 6-foot-11 center from Woodbridge, Calif., who was widely regarded as the No. 1 player in the 1997 class over players like [Dion] Glover, Elton Brand, Baron Davis, Lamar Odom, and Tracy McGrady.

After two dismal seasons at Duke, Burgess transferred to Utah and ended up overseas.

“I just don’t see Tony as a guy who slaps the floor and takes charges,” Glover said while hopping out of his seat and simulating Duke’s famous floor-slapping maneuver. “I can’t see that.”

“I see what you’re saying, Tony,” [family friend Karen] Gibbs said. “You want to make sure they’re going to use you the correct way, right?”

“Exactly,” Parker said. “I really like Duke. I just can’t honestly say that I’m 100 percent comfortable with a guard teaching me about the post. Coach [Steve] Wojciechowski is like 5-foot-6.”

If this is the perception, as many believe it has been at least since Shelden Williams left the school in 2006, you have to wonder how Duke can ever restore the narrative.

Jefferson and Parker are power forwards, not centers, but it would still represent a step in the right direction if either commits to Duke. Jefferson will likely announce his decision next week, and Parker is set to choose Monday afternoon. Parker is the better recruit, but the rumor mill has him choosing UCLA or Georgia. Jefferson is waffling between Duke, NC State, Villanova, and Kentucky. Some guess that C.J. Leslie’s decision to return to State clears the path for Duke, but Kentucky is making a late push, and Calipari’s pitch is the best in college basketball.

If Duke loses both recruits, it will be one of the worst offseasons in recent memory. Coach K will still put a talented team on the floor next year, and he remains one of the best leaders in college basketball, but the direction of the program is cause for anxiety, if not outright alarm.

A dark cloud of negativity surrounded UCLA all season, culminating in a Sports Illustrated feature released in late February, but Ben Howland’s excellent 2012 class may have cleared it up in one fell swoop.

ESPN has the Bruins as the third-best class in the country, and Howland still has a great chance to land Parker and possibly move up to second, just behind Kentucky. As it stands, UCLA is the only school with two top-5 recruits — Muhammad and 6-foot-7 small forward Kyle Anderson — and they’ll be joined by four-star forward Jordan Adams, a 6-foot-5, 220-pound scorer out of Oak Hill Academy in Virginia.

That trio will join a talented rising junior class that includes the Wear twins, Joshua Smith, and Tyler Lamb, and UCLA will join Arizona as the most exciting team in the Pac-12.