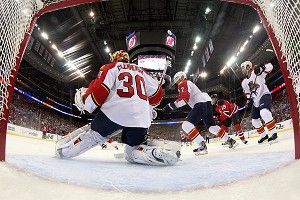 When the Phoenix Coyotes goaltender Mike Smith went down after a collision with the Chicago Blackhawks’ Andrew Shaw, it appeared Phoenix’s playoff hopes would fall with him. Smith has been such a large part of the Coyotes’ success this season (although, to be fair, Phoenix’s defensive system has been equally vital to Smith’s improvement, so it’s a little bit of a chicken-or-egg thing) that to lose him seemed like notably bad news.

He ended up being OK, though (to the great irritation of Blackhawks fans, who saw Shaw suspended three games based partially on what they felt to be a trumped-up injury to the goalie), and no one ever had to find out what Jason LaBarbera, the backup netminder, would have had to offer. But for seven other playoff teams, backups have had to bounce up off the bench. Here, we rank their performances, from worst to first.

You can’t really judge Sergei Bobrovsky for what happened Wednesday. (What happened was, he went into the game after starter Ilya Bryzgalov gave up five goals … and went on to give up five more of his own.) After all, that entire Pittsburgh-Philly series has been absolutely silly. Giving up five goals on 18 shots is probably one of the better defensive stat lines on either team, really.

See Sergei Bobrovsky. Johnson gave up a goal pretty much immediately upon entering the game in the third period Sunday, but again, that’s the least bad thing anyone on the ice did that day.

Tuesday night’s Devils-Panthers game had the fun distinction of being one in which both teams pulled their goalies. The Devils called for a replacement for Martin Brodeur after he allowed three unanswered Panthers goals, which tied the game at 3-all. Johan Hedberg ultimately earned the loss, giving up the game-winning goal to Brian Campbell shortly after entering the game, but he did make this pretty sweet stop on Marcel Goc. They’re not booing, they’re saying “Mooooose.”

Florida’s Scott Clemmensen was once a backup goaltender for the Devils, but never saw a playoff start with the team. But after replacing Panthers starter Jose Theodore in Game 3 — after Theodore surrendered three goals on six shots — and stopping 19 of 19 shots to pick up the win, Clemmensen earned the Game 4 start against his old team. Unfortunately, it didn’t go quite as he would have wanted.

Brian Elliott isn’t your typical backup goalie, but then again, the Blues aren’t your typical team. It’s not just the Blues’ forward corps that is so well balanced, it’s the team’s goaltending tandem: While Jaroslav Halak began the season as the ostensible no. 1, Elliott played himself from a two-way contract into a modest extension and an All-Star appearance. Halak was tapped to begin the playoffs, but when teammate Barret Jackman collided with him in Game 2, Elliott stepped in.

In Game 4, Elliott’s 24-save performance helped the Blues move just one win away from a first-round victory. “We’ve been doing this all year,” Blues coach Ken Hitchcock said. “Brian’s kind of a great relief pitcher. He’s going to do some long relief right now, but he’s been good. He’s a big guy that plays a big game.”

In my playoff preview I selected the song “Under Pressure” to represent the Canucks, and Roberto Luongo in particular. Cory Schneider had his finest season yet in the Vancouver backup role, and it only took two games — neither of which were really Luongo’s fault — for Schneider to get the nod. (It’s a prep school blast from the past: Schneider, who went to Andover, used to play against L.A. Kings goaltender Jonathan Quick, who attended Avon Old Farms.) Schneider, who will be a restricted free agent this summer, had a big Game 4 win that included a big stop on a third-period penalty shot. And with the Canucks perhaps on the verge of being eliminated sooner than expected, the Vancouver media is already fueling the goalie drama that will certainly peak this summer.

I suppose you could say that Braden Holtby doesn’t exactly qualify as a backup goaltender, given that he’s played every minute of the playoffs. But it was only in the season’s final weeks and days that Holtby’s role in the postseason became clear. As the team’s third goalie behind Tomas Vokoun and Michal Neuvirth, both of whom were sidelined by injuries, Holtby saw only seven regular-season games and didn’t look all too impressive in the AHL either. (“One theory? He was bored,” wrote CBC’s Elliotte Friedman this week. “Guess it happens, sometimes, with prospects who’ve had a taste of the NHL and feel they have nothing more to learn at the minor-league level.”) In three of the Capitals’ four playoff games thus far, Holtby has allowed only one goal; he rebounded from a four-goal Game 3 performance by stealing Thursday night’s contest with 44 saves to tie the series at two games apiece. “When you have a goaltender playing well, it really, really settles your team down,” Brooks Laich said. “He was a leader for us tonight.”