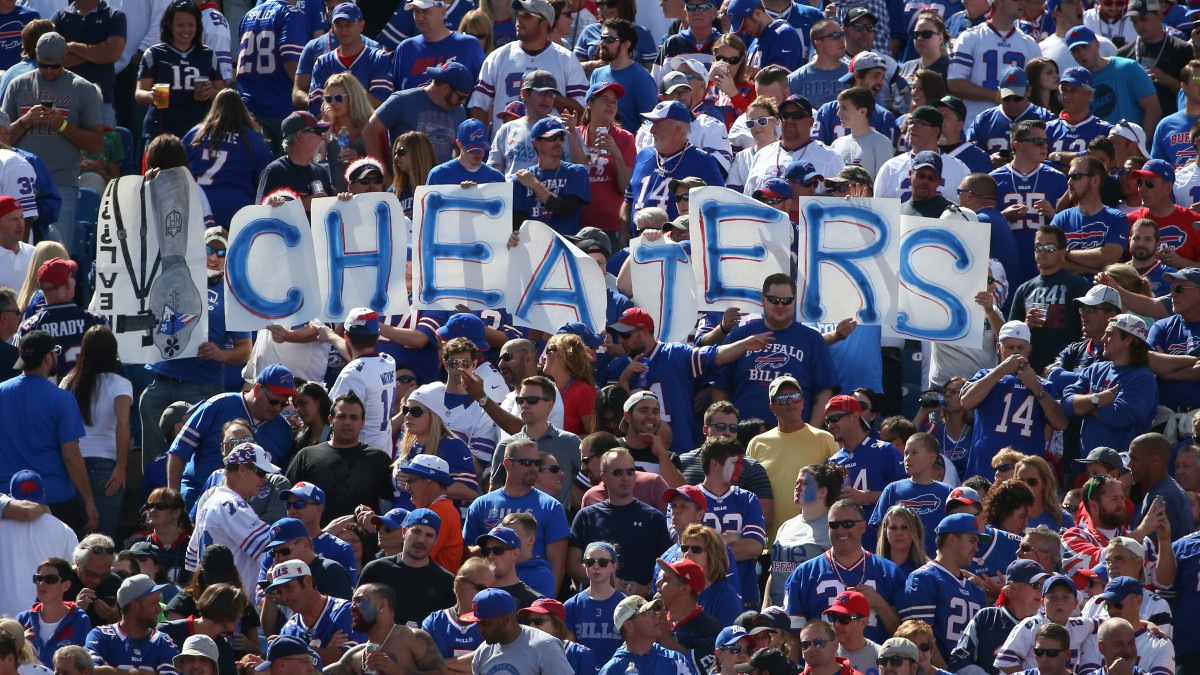 In the morning before kickoff of the Bills-Patriots NFL game on Sunday, two downtown hotel employees stood at street level helping mostly visiting Pats fans get into cabs to head to Ralph Wilson Stadium. “Are you going to the tailgates?” one asked a couple of men, then answered her own question. “Of course you are, at this hour.” During a lull in the car line, she and her colleague murmured among themselves about the bustle of the weekend. “This is the closest I’ve seen to a Super Bowl!” one said.

Every good story needs a villain, and the New England Patriots came into this season having cemented their legacy as America’s Foe. Even fans who despise the shady, arrogant machinations of the NFL and scoff at every move made by Roger Goodell still can’t resist the conformist comfort of being casually anti-Patriots. (Whether you’re being weirdly serious or merrily ironic, Belicheat rolls off the tongue just like Nobama.) It’s just so easy to go that route, particularly when the Patriots are so very hard to play.

Buffalo has been hating New England since before it was cool. As AFC East opponents, this rancor goes back awhile, even if the rivalry has been pretty one-sided for quite some time. (Going into Sunday’s game, Tom Brady’s record against the Bills was 23-3.) When Rex Ryan was introduced as the Bills’ newest coach in a mid-January press conference, he singled out the Pats (over the Jets) as the team squarely in his crosshairs, the one “I want the most.” With Buffalo beating the Colts 27-14 in Week 1, the Bills and their fans went into Sunday’s game with a strut in their step. There’s nothing like the heady leaguewide overreactions to the first few weeks in the NFL.

Everywhere on the roads surrounding Ralph Wilson Stadium were signs of Bills support and of Patriots scorn. A man MCing an elaborate RV tailgate stayed focused on the home team as he delivered a series of encouraging remarks over a little PA system: “REX, DRUGS, AND ROCK AND ROLL!” he yelled. But nearby, another man dressed head to toe in Bills apparel walked out on his lawn and drove a picketed sign into the landscaped earth around his mailbox. It was a picture of Brady and Bill Belichick on a Wheaties box, except the letters spelled out CHEATIES. (This is a standard trope that has also, over the years, featured A-Rod, but hey: the classics are the classics.)

A number of the homemade “Park Here! $10 Bathroom Inside!” signs that dotted the yards and driveways in the surrounding neighborhood came with attached “No Pats Fans” qualifiers.1 Two men with no regard for political correctness had a sort of pin-the-tail-on-the-donkey-style situation set up along a main road that involved a derpy photo of Brady and a huge cardboard phallus festooned with the logo of the Buffalo Bills. When people in Patriots gear walked by, the resulting gyrations took on a desperate fury. Not far from them, posted on a garage wall, was a tidily hand-lettered sign that was, by comparison, most elegant in its simplicity. “BRADY CHEATS” was all it said.

Inside Ralph Wilson Stadium, across from the Dinosaur Bar-B-Que counter, the Bills team store featured a display of football pumps; they didn’t seem to be flying off the shelves, but they were great for publicity. People walking past all of this to their seats were exhorted to remember to be loud. Through a GoFundMe campaign, fans had raised $9,200 to bring a representative from the Guinness Book of World Records to town in an attempt to officially set a new crowd-noise high.2

Early in the game, it seemed possible that everything — beating the Patriots, beating the record — might fall into place after all. First the Bills went up 7-0 on a 10-play, 80-yard opening drive. When Brady and the Patriots took the field, loud chants of CHEAT-ERS gave way to general screaming designed to drown out communication for New England. Everyone was on their feet. Some people were booing, but most were just yelling “AHHH!!!” like monsters.

And it worked! The Patriots passed for one yard, passed for one yard, fell into disarray, and called timeout. A third-down pass to Julian Edelman was incomplete, and special teams came out to punt. The couple next to me, who lived five minutes away and had been attending games “since 1971,” soothed their throats by sipping on Capri Sun packages they’d smuggled into the stadium in their pockets. “I don’t know if I can do this the whole game!” the wife exclaimed, panting in semi-mock exhaustion.

She wouldn’t have to. The Patriots converted each of their next three drives into touchdowns. Compared with the scrambling near-panic of Bills quarterback Tyrod Taylor, Brady was terrifying in his precision. It was like watching a mosquito buzzing all around and then getting coolly swatted. It was like watching a dad teach his kid a lesson, or a surgeon suture something up. It was embarrassing, really: I started wondering if the Guinness Book of World Records person was somewhere in the stadium being polite and chipper and “Hey, this will just make it louder when the Bills come back!” or if she was theatrically checking the time and projecting condescension on the silly optimists who had orchestrated this doomed attempt.3

The Bills scored again before halftime — Charles Clay’s touchdown with five minutes to play in the half inspired the highest decibel level recorded on the day — but by the end of the third quarter Bills safety Aaron Williams had been taken off the field on a stretcher, Taylor had been sacked for fumbles on consecutive plays, and the score was New England 37, Buffalo 13. The crowd was no longer on its feet at all times, and the volume in the stadium rose only when everyone was collectively agonizing over an unforgivable Bills personal foul or what they perceived to be an unfair call.

Many seats emptied out. The people in my section started making sarcastic remarks about Rex Ryan’s hallowed defensive prowess. This is what the New England Patriots do to people. It’s so much fun to hate them, until it’s really, really not.

Buffalo clawed its way back into the game in the fourth quarter, however, scoring twice and even sacking Brady for a fumble at midfield. On the next drive, the Bills went 50 yards on two long passing plays, including an end zone snag by Sammy Watkins. Between the sudden giddiness and the space created by people leaving early, there were a lot of high fives with major windups, and no shortage of leaping, flying hugs. The Patriots calmly responded with a 72-yard drive — including a highlight-reel pass to Danny Amendola — and a field goal.

Buffalo got the ball back down eight, and threw a game-ending interception on the first play.

After the game, a glum Rex Ryan took full responsibility for the losing effort, while Taylor blamed shoddy execution. That’s what the Patriots do to you, though: they leave no room for error, no space for mistakes. They are relaxed while they stifle you. They aren’t perfect, but they are something worse: able to quickly iterate. They make a mistake and come back stronger, better, more complete. They turn your gains into your loss.

As I sat in postgame traffic I saw the inhabitants of a few cars trying to yell expletives out their windows at happy Patriots fans, but their hearts weren’t really in it. Even prattling on about cheaters loses its luster when you’ve just been beaten fair and square. I turned on Buffalo sports radio, and the host was sighing. Hey, at least the Bills had gotten close enough to make it interesting, he said, then heard what he was saying. He chuckled: at himself, at the Bills, at Buffalo sports in general. “Listen to me,” he said. “At least they made it close? I hate this town sometimes.”

NFL Winners and Losers: The Steelers Light It Up, the Eagles Fall to Pieces